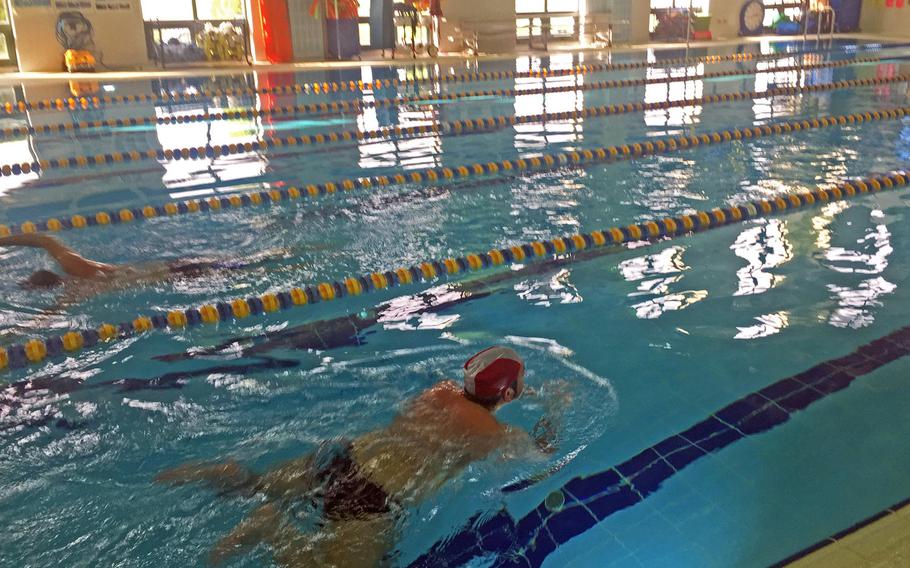 Patrons swim laps at the fitness center pool on April 27, 2018, at Navy Base Capodichino in Naples, Italy. Morale, Welfare and Recreation's decision to reinstate 2014 user fees at Mediterranean pools has upset many military residents. The lap pool pictured here is one that will remain free for U.S. ID holders and fitness center members. (Scott Wyland/Stars and Stripes)

NAPLES, Italy — Many servicemembers and their families are irked that the Navy plans to reimpose fees to use base swimming pools in Europe, saying they are too high for these facilities.

Morale, Welfare and Recreation’s finances were strong enough regionally in 2014 to waive pool fees at the Naples, Sigonella and Rota naval bases, but this year’s weaker funding has forced MWR to reinstate the same fees it charged in 2014, the Navy said.

Beginning in May, the cost per visit will be $4 for bathers 16 and older and $3 for children ages 6 to 15. Children under 6 will be admitted for free. A 30-visit pass for adults is $95 and $65 for children. No family passes are available. The lap pool in Naples will remain free for those with U.S. identification or fitness center membership.

Most servicemembers and spouses said they were fine with paying to swim. But some think the fees are too steep and will make it hard for many families to afford regular pool visits to escape Italy’s humid summer heat.

“Since we only have AC in our bedrooms at our house, we used the pool frequently, as it gets quite hot here in Sicily,” said civilian military employee Dustin Gilroy on Facebook. “Now we will not be using the pool and trying to find some other option to keep cool.”

The income from the reimposed fees will help cover labor, supply and equipment costs so the pools can maintain their normal hours this summer, said Lt. Cmdr. Ed Early, spokesman for the Navy regional command.

Pool fees vary at military bases and some, such as Yokosuka Naval Base, Japan, charge nothing for regular use.

The aquatic center at Ramstein Air Force Base in Germany has three heated indoor pools open year-round. It offers monthly adult passes for $20, monthly family passes for $35 and a yearly pass for $90.

Several Facebook commenters said Ramstein and other bases charge lower fees while offering more amenities. A frequent complaint was that the Navy offers no family passes.

Early said there were no plans at this time to create family passes. “MWR continually reviews pricing structures in all of their programs,” he said. “(MWR) will closely monitor and recommend changes where possible to keep fees as reasonable as possible and still maintain financial solvency.”

A few people pointed to the region’s beaches as an option for those who don’t want to pay pool fees. But others said that many Americans don’t want to venture off base.

Some posters argued that MWR was doing the best it could in a tough situation and that people should appreciate having any base swimming pools at all.

“Not all bases have pools; others only have pools in housing areas in which housing residents are the only ones that can use it,” said Renee Fain, a Naples resident. “Yes, it is a basic pool but is better than none.”