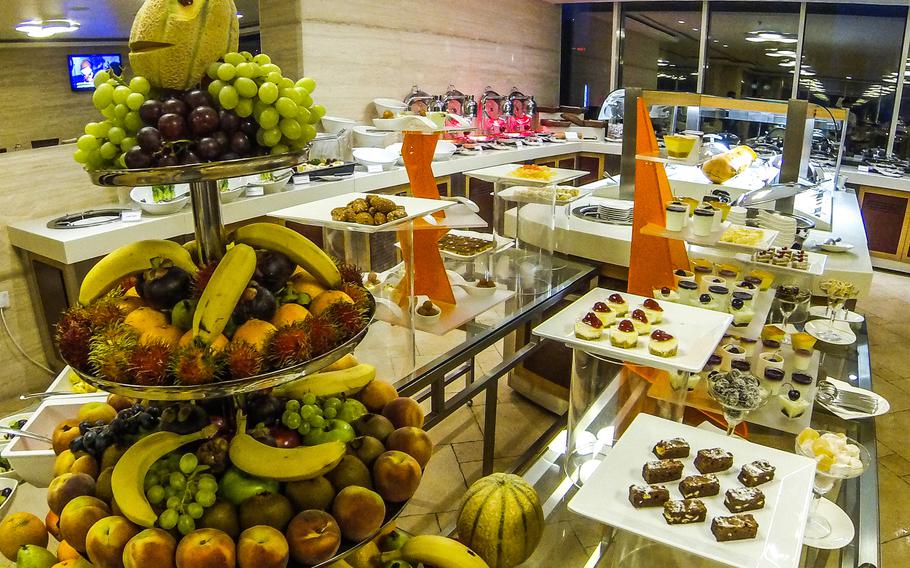 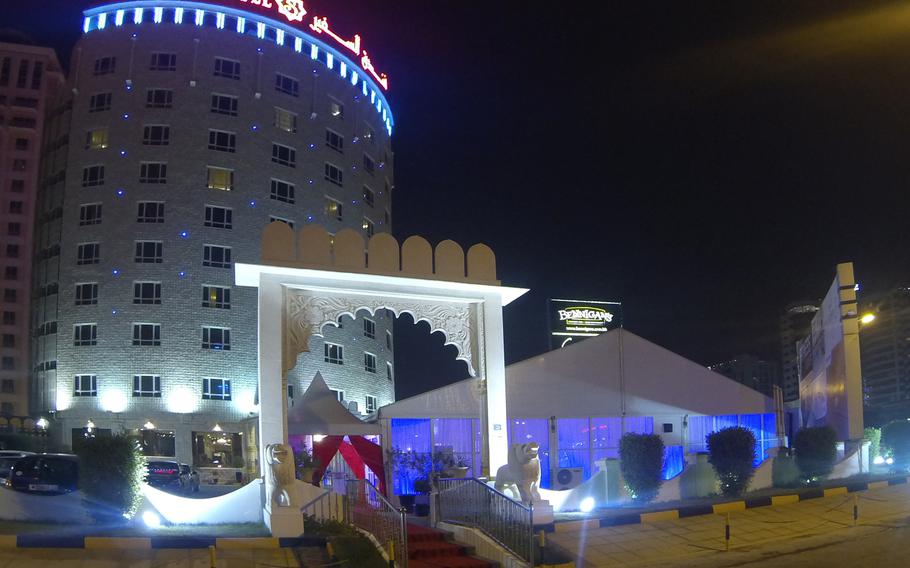 Buy Photo
The Al Safir Hotel in Juffair is a recommended spot for an Iftar dinner. Here you will find a more traditional experience. The Al Safir Hotel has a Ramadan tent set up outside, but it's mainly used for group reservations of 50 or more people. For everyone else, Iftar is served inside the hotel restaurant and costs 7.5 BHD. (Hendrick Simoes/Stars and Stripes) Buy Photo
A variety of small but scrumptious traditional Arabic sweets and desserts are usually served at an Iftar dinner. (Hendrick Simoes/Stars and Stripes) Buy Photo
A mainstay of Arabic cuisine is mixed grill, which features various meats such as lamb, beef and chicken. Rice and vegetables is also a staple of most dishes. (Hendrick Simoes/Stars and Stripes)

During Ramadan, Muslims worldwide fast from sunrise to sunset, and that’s why many restaurants in the Gulf and throughout the Middle East put aside their normal menus during the holy month to serve a special fast-breaking meal every night.

But “meal” is probably too small a word. In reality, it’s more of a buffet-style feast featuring a wide variety of Arabic cuisine, juices and desserts. So be forewarned: I, for one, gained 15 pounds last year during Ramadan!

Fasting is one of the five pillars of Islam. It’s about self-control and obedience to God. But at sunset, when the cannons fire to indicate that it’s time to break the fast, the traditional evening meal is called Iftar. And while many Muslim families enjoy Iftar at home among family and friends, it also is common to join in as part of a community or large group.

While this is a feast with deep roots in Muslim tradition, you do not have to be of the Muslim faith or fasting to partake. In fact, this is one of the few ways non-Muslims living in the region can experience a taste of the culture during Ramadan.

For an even more traditional experience, some Iftar feasts take place outside in Ramadan tents that incorporate traditional designs to enhance the mood and spirit of the holy month.

In Bahrain, a good Iftar should not cost you more than 8 Bahraini dinar ($21). A good place to start is at the Elite Crystal hotel, a 10-minute walk straight down from the Naval Support Activity’s walking gate. The Iftar there costs 6 BHD and is generally regarded as one of the best in the immediate vicinity of the base.

The dishes vary from night to night, and the hotel also offers a selection of Western-style dishes for those who aren’t ready to plunge into traditional Arabic cuisine. But traditional fare, including lamb chops, various kebabs and desserts, are generally straightforward and incredibility delicious.

A coat and tie are not required, but when attending Iftar, one should dress semi-formally and conservatively because it is a meal of important cultural value. Beyond that, Iftar is about eating while enjoying the company of family and friends.

Ramadan Kareem! And enjoy your meal.

IFTAR DINNERSWhere: Most restaurants in four- or five-star hotels serve Iftar. But there are plenty of other Arabic restaurants serving Iftar as well.

Hours: Generally sunset to 8 p.m., though some locations serve Iftar until midnight or 2:30 a.m.

Food: A variety of meats, seafood, pastas, salads and desserts.