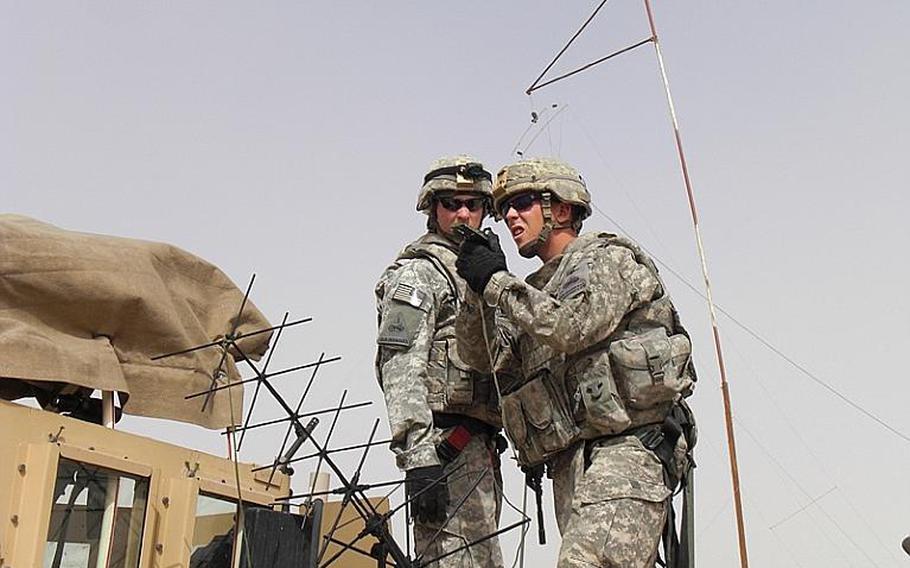 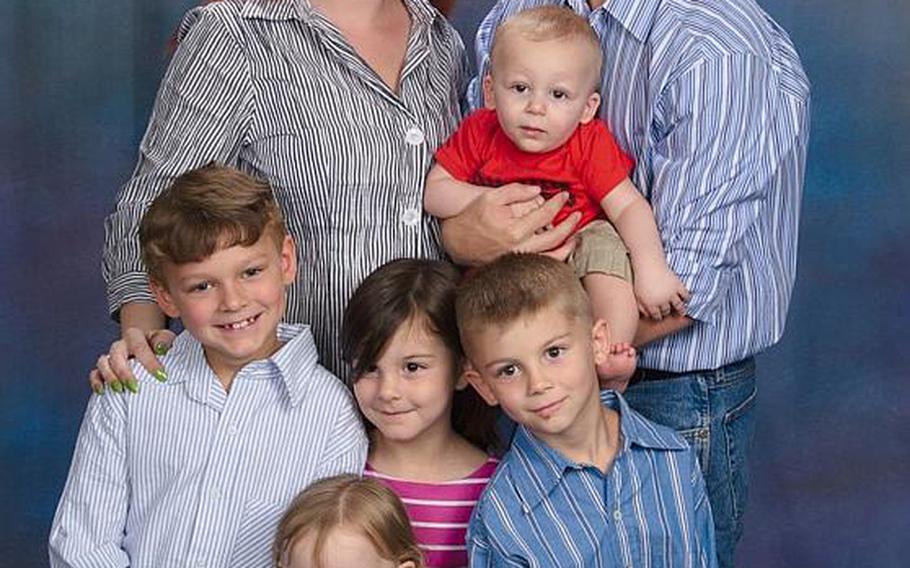 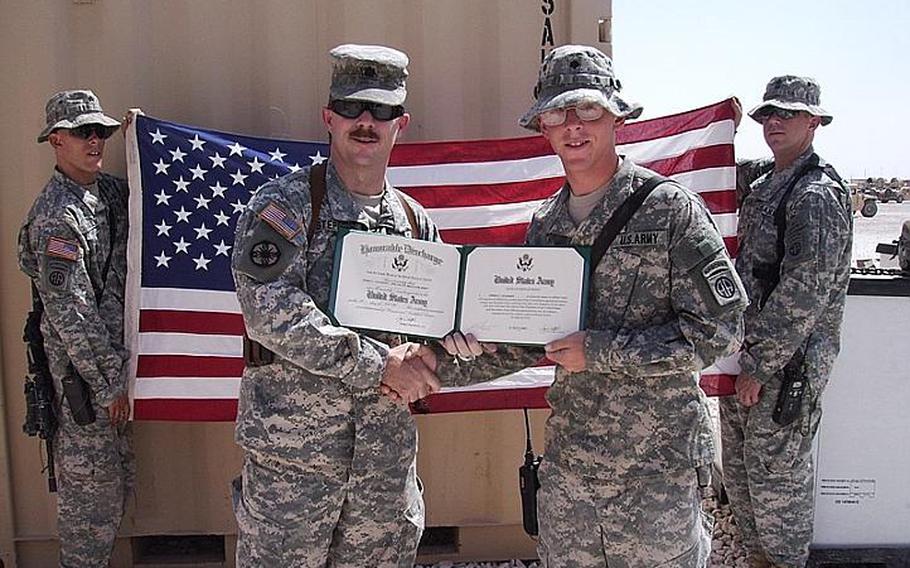 Then-Spc. James Coleman, right, re-enlists in Iraq during his third deployment in 2007. (Courtesy of James Coleman)

After four days on patrol and a short rest, Army Sgt. James Coleman phoned his wife from his combat outpost in Afghanistan to tell her he&rsquo;d soon be outside the wire again and unreachable. For how long he didn&rsquo;t know.

It was a major operation, he said, one that he couldn&rsquo;t go into much detail about. But for 27-year-old infantry squad leader, it essentially meant leading his small unit through farm fields and mud-brick villages in the Kandahar province&rsquo;s Zhari district, laying the groundwork for small, fortified &ldquo;strong points.&rdquo; The precarious outposts are a key part of a plan to expand the U.S.-led coalition&rsquo;s zone of control in the region.

It would be a welcome development if his platoon, part of the 1st Battalion, 32nd Infantry Regiment&rsquo;s Task Force Spartan, met no resistance. But no one expected that. In recent days, Coleman&rsquo;s battalion had experienced heavy fighting in the district and had lost several soldiers.

Coleman is four months into his deployment to southern Afghanistan, his fifth combat tour since joining the Army at age 19 in 2003. He was single then, fueled by the sense of duty that permeated the post-9/11 Army and untethered by further responsibility. Now his identity as a soldier is shaded by the reality that he&rsquo;s also a husband and a father.

One late August nightfall, the members of Task Force Spartan, whose motto is &ldquo;With your shield or on it,&rdquo; moved out from their combat outpost.

It was just before noon then at Fort Drum, N.Y. Becka Coleman, who had married James Coleman in 2007, was reconciling herself to the fact that in the best of cases, she wouldn&rsquo;t hear from him for days. In the worst case, well, she said she doesn&rsquo;t allow herself to dwell on such thoughts.

The couple have five children ranging from 2 to 9 years old, three of whom are from her previous marriage.

As she went about the day-to-day business of running their large family &mdash; now was time to buy new school clothes and supplies &mdash; she found herself lingering by the computer waiting for an email, or checking her cell phone for an instant message from her husband.

Becka Coleman said she is getting used to frequent silences and constant anxiety. Though he&rsquo;s a seasoned veteran, she said, James has never been locked in the day-in, day-out conflict Task Force Spartan is fighting now.

&ldquo;This is our third deployment together,&rdquo; she said. &ldquo;On the first two, he was able to talk to me almost every day. This one has been a very different experience. We can go six days or a week without talking.

&ldquo;I worry all the time about what&rsquo;s happening to him.&rdquo;

But just as James Coleman has his job as a squad leader, she has responsibilities as a military spouse. It&rsquo;s not just a matter of keeping things running on the home front, but managing it with a level of calm that she says she hopes her husband can sense thousands of miles away.

She fears the consequences of not doing so.

&ldquo;I have to stay strong so he can stay strong and focused as a soldier, and I can have him home and we can have our happily ever after,&rdquo; she said.

She also feels the burden of creating a stable and secure home for her children.

&ldquo;Kids are very strong, and our kids especially are,&rdquo; she said. &ldquo;But I also know if I&rsquo;m not handling things well, they&rsquo;re not going handle things well. I have to be strong not just for him but for them too.&rdquo;

An explosion announced the enemy contact Task Force Spartan had expected. Insurgents were shelling them with a recoilless rifle, a powerful anti-tank weapon Coleman likened to &ldquo;an RPG on steroids.&rdquo; Several members of the battalion had recently been killed or wounded by Taliban using recoilless rifles.

This time, however, the shells fell harmlessly. The soldiers meanwhile were able to pinpoint the attacker&rsquo;s location and direct an airstrike, killing him before he escaped or improved his accuracy.

&ldquo;We&rsquo;ve lost guys to these weapons, so it was good to take that one off the battlefield,&rdquo; Coleman said.

Coleman tells it as if it were simply a good day at the office. In his early years as a soldier, the tale of the engagement would have focused on the adrenaline rush and the danger. He was a different person then.

&ldquo;When I was young and single, I felt invincible. I didn&rsquo;t even think about getting hurt,&rdquo; he said. &ldquo;I was in the airborne jumping out of planes. I wasn&rsquo;t a popular kid in high school or a sports star, and so now I had that kind of sense [that] anything&rsquo;s possible, I can kick anybody&rsquo;s ass. It was empowering.&rdquo;

But fatherhood changed his perspective, he said. As a sergeant, his greatest satisfaction today comes not from battlefield action, but from taking raw privates just out of infantry training and, he says, &ldquo;making them grow up&rdquo; and giving them real-world skills necessary to succeed and survive in combat.

&ldquo;It&rsquo;s funny because now that I&rsquo;m a father, I find myself playing the father figure role with the young soldiers,&rdquo; he said. &ldquo;Fatherhood changes you. I have a lot more to think about these days &mdash; my soldiers&rsquo; well-being, my family&rsquo;s well-being. When I was young I only had to think about myself.&rdquo;

He loves serving in the Army, Coleman said, but on his fifth tour of duty, he has a gnawing feeling that increasingly, his primary responsibility is with his wife and children.

&ldquo;Sometimes I think I have to be here &hellip; [because] what I&rsquo;m doing is one of the most important things in the world,&rdquo; he said. &ldquo;Other times I regret every minute I&rsquo;ve missed of my children&rsquo;s lives. My daughter was born only about a month before my third deployment, and 16 days after my son was born, I left for my fourth deployment. I missed the entire first years of their lives.&rdquo;

Coleman, of Lincoln, Neb., is the third consecutive generation of his family to serve in the military. His grandfather&rsquo;s research uncovered the fact that an ancestor, Henry Finkenbiner, an Indiana volunteer, won the Medal of Honor for a heroic charge in the Civil War. But James Coleman is a new kind of soldier in U.S. military history, a veteran of the long war sparked by the Sept. 11 terror attacks.

On Sept. 1, after five days of silence, Becka Coleman&rsquo;s cellphone lit up with the text message she&rsquo;d been waiting for &mdash; a digital kiss from her husband: &ldquo;Hey baby :-* I love you so much and miss you tons.&rdquo;

He would have a few days on base to catch up with events at home. Then he was beyond the wire again, and Becka was back to worrying. But she accepts what drives her husband to fight.

&ldquo;He feels like he has purpose, that he can be a good leader and set a good example for his guys,&rdquo; she said. &ldquo;And he is. He&rsquo;s a very good leader and I&rsquo;m proud of him.

&ldquo;But I guess I would like it if he could find something in the Army that makes him happy and that&rsquo;s nondeployable. But I told him from very beginning &mdash; stay in the Army, get out of the Army, change your MOS, whatever he needs to do. Just please don&rsquo;t make it too crazy.&rdquo;