‘I knew where I was; I knew what I was doing’ 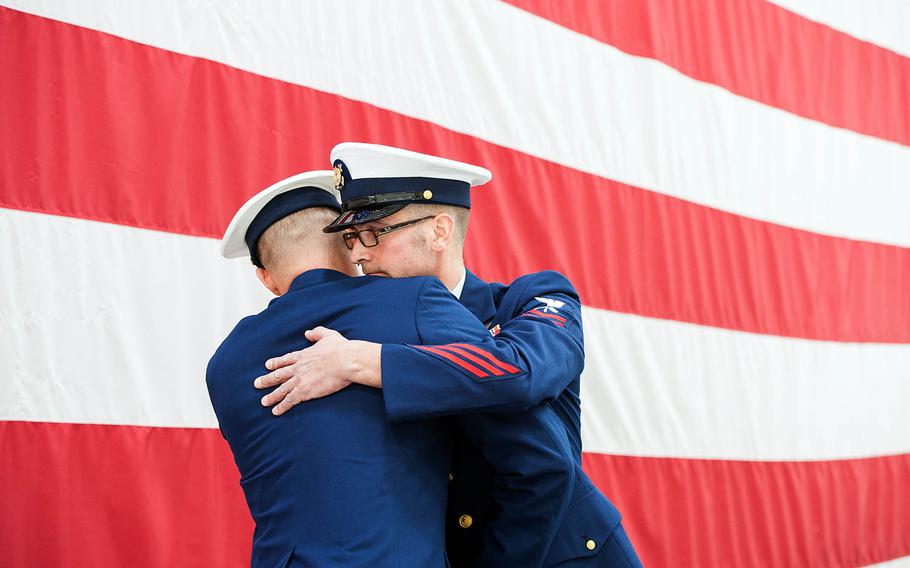 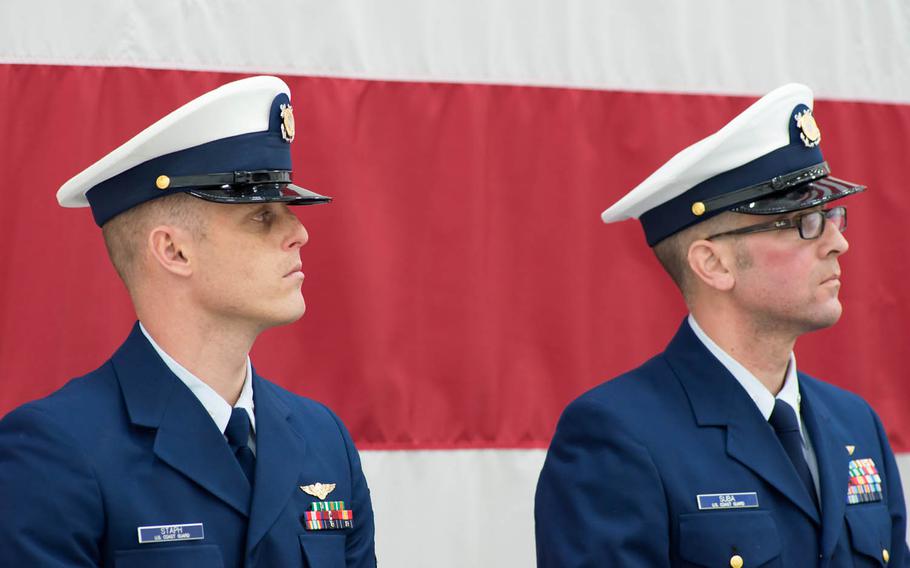 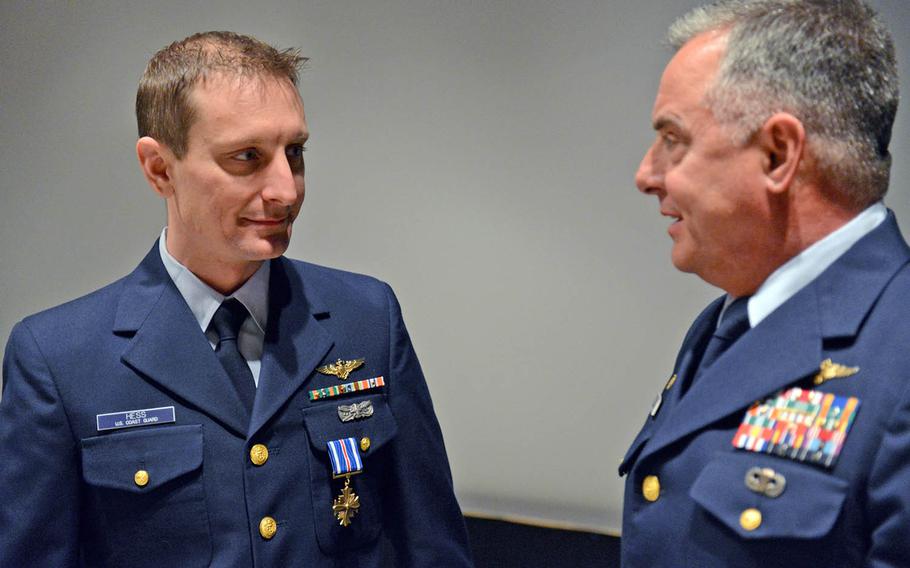 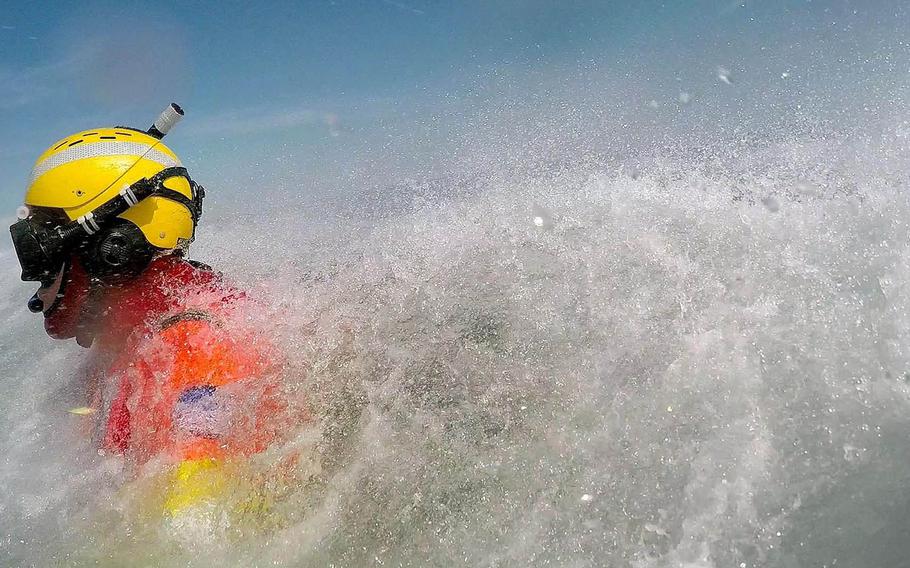 Petty Officer 3rd Class Evan Staph swims during an exercise in Cape Cod, Mass., on April 2015. He was awarded the Air Medal in January 2016 for a rescue mission south of Nantucket. (Eduardo Jorge/Courtesy of U.S. Coast Guard)

The Sedona had lost electrical and engine power soon after setting out from Narragansett Bay. Jason McGlashan and his father, Reg, were headed home to Australia in the sailing vessel, which the younger McGlashan had purchased at a bargain price on eBay and had just spent weeks fixing up at a marina in Rhode Island.

By the time the time helicopter crew of four Coast Guardsmen had reached the boat, waves were approaching 30 feet and winds were at 60 knots.

“I had never seen 30-foot waves before,” said Staph, the crew’s rescue swimmer. “I’ve swum in waves close to that but never anything turbulent or windy as that with 60-knot winds.”

The weather conditions would complicate every aspect of the mission: the flights out from and back to Coast Guard Air Station Cape Cod, the positioning of the helicopter over the boat, and the hoisting of Staph into and out of the water. What made the perilous rescue a success was the crewmembers’ skill in working together, honed through constant training among themselves and with other teams.

Each crewmember praises the others for their actions during the rescue. Hess describes Suba’s role as crucial to the mission’s success. The flight mechanic’s job was to direct the MH-60 Jayhawk over the sailboat and to operate the hoist that raised and lowered Staph.

“I tell Derrick this often: He didn’t get the DFC for that, but I think he deserves it,” said Hess, 40, a Pittsburgh native. “He’s the reason why it was successful. You know Evan’s bravery — he was down there swimming — and sure, I flew the helicopter, but Derrick was the keystone to the whole operation.” Suba is now a petty officer 1st class.

The winter of 2014-15 had already entered the record books, with a massive blizzard in January, when the Feb. 15 storm struck the U.S. Northeast. The crewmembers were roused from their bunks about 4 a.m.

“The weather wasn’t too bad, but it was going to get real bad, real quick,” Hess said.

Before setting out, crewmembers conferred over their game plan and made sure everyone was committed to the mission.

“J.D. did a really good job of leading that discussion, in a receptive but stern way,” said Vanderslice, 30, a native of Stonington, Conn.

Calamity threatened when the helicopter was about halfway between the shore and the disabled vessel. Crewmembers heard lightning, and the aircraft made an emergency descent to avoid getting hit.

“That could pose a catastrophic consequence, if we had lightning strike the aircraft,” Vanderslice said. “It could fry all our electronics; it could blow up a rotor blade, start a fire — there are innumerable consequences.”

At the scene, crewmembers found the boat hurtling through the waves, with line and sails in the water and debris in front of the vessel.

Erring on the side of caution, the team placed Staph behind the boat to avoid the junk, but the vessel remained beyond his grasp. The crewmembers repositioned him in front.

“That was a higher-risk situation,” said Staph, 29, a native of Dana Point, Calif. “It was very daunting, because you have this boat that’s just being ripped through the water, rocking back and forth; there’s just a ton of line, and the sails are in the water. Everything is just a snag hazard.”

Staph managed to get Reg McGlashan into the rescue basket. Suba, 41, a native of Attleboro, Mass., drew the father into the helicopter. “I don’t think any hoist is easy, but I was able to successfully get him into the basket, and he was compliant; he didn’t make it too difficult for me,” Staph said.

The next recovery wouldn’t go as smoothly.

While Suba had been bringing up the father, the standard hoist control failed. The cable would have to be raised and lowered at a much slower rate.

As they had during every stage of the mission, the crewmembers evaluated the risks to themselves and to the sailors.

Suba stood at the helicopter door and consulted with Staph over the disabled hoist. Suited up with his head covered in a helmet and neoprene cap, Staph couldn’t hear well.

Still, there were worries about how the crippled hoist would hamper the rescue. Suba and Staph said maneuvering it would be more difficult, with the waves churning at a higher rate than the basket could be lowered. Usually, the cable can be raised or lowered at 250 feet per minute; now it was restricted to 85 feet per minute. The limitation was frustrating.

“When I realized what was going on and I was trying to lower the basket, it kind of felt like being in a wheelchair at a NASCAR race,” Suba said. “Your emotions are going, your adrenaline is going, and you can only walk; you can’t run.”

To compensate, Hess raised and lowered the helicopter.

“The helicopter can move up and down quite quickly,” Suba said. “So when Evan and I got the survivors in the basket and wanted to come up, I asked the pilot to go up. And he can go up a lot faster than I can raise the hoist, so that’s how we ended getting the survivors up and out of the water quicker and more efficient.”

“Dancing between the different actions” is how he and the pilot described their coordination, Suba said.

There was another complication in getting the son out of the water. As Suba lowered the basket, it swung toward Jason McGlashan. The basket weighs about 40 pounds; Staph estimates it was moving about 30 mph.

“So I put up my hand to stop it, and at that point I received an electrical shock from the basket, and I lost consciousness,” Staph said. “I … remember putting my hand out and I remember coming through with my legs arching to my head; everything, like my body, contracted, like all of my muscles contracted and my heels tried to touch the back of my head and my arms tried to touch behind my back.”

Fortunately, when he came to, Jason McGlashan was still nearby. “I knew where I was; I knew what I was doing,” Staph recalled. “Everything just hurt.”

A few minutes later, Jason McGlashan was hoisted into the basket and raised to the helicopter. “I knew at that point that these guys were safe. I couldn’t be more grateful,“ Staph said.

Suba cared for the two men, who were suffering from hypothermia. Staph was also in pretty bad shape. He was vomiting, he said, losing and regaining consciousness.

Hess and Vanderslice now faced the difficult task of getting the helicopter back to the base, a trip that ended up taking 2½ hours.

The landing was a heady experience. They faced 50- to 60-knot winds of blowing powdered snow, which Hess described as “a 70-foot-high wall of baby powder just moving sideways.” To help the pilots see the landing strip, the ground crew lighted flares and marked the runway with sea dye marker. Plows cleared a path for the helicopter.

“It almost felt like following a bunch of linebackers plowing through anything, he said.”

Hess echoed the sentiment. “When you’re out there, it’s the four of us; we feel alone,” he said. “But really, everybody was working hard to make sure we could get home.”

Probably every Coast Guard pilot wants to be put into the position to get the Distinguished Flying Cross, Hess said, and he’s no different. But he’s quick to credit the others in his crew for their performance in what was by far his most difficult rescue.

Like Hess, Staph singles out Suba for praise. “At the end of the day, he was the guy that saved those guys’ lives,” he said.

“I think rescue swimmers, we’re trained to work alone, but the truth is we rely on the crew,” he said. “Without them, we’re done for.”