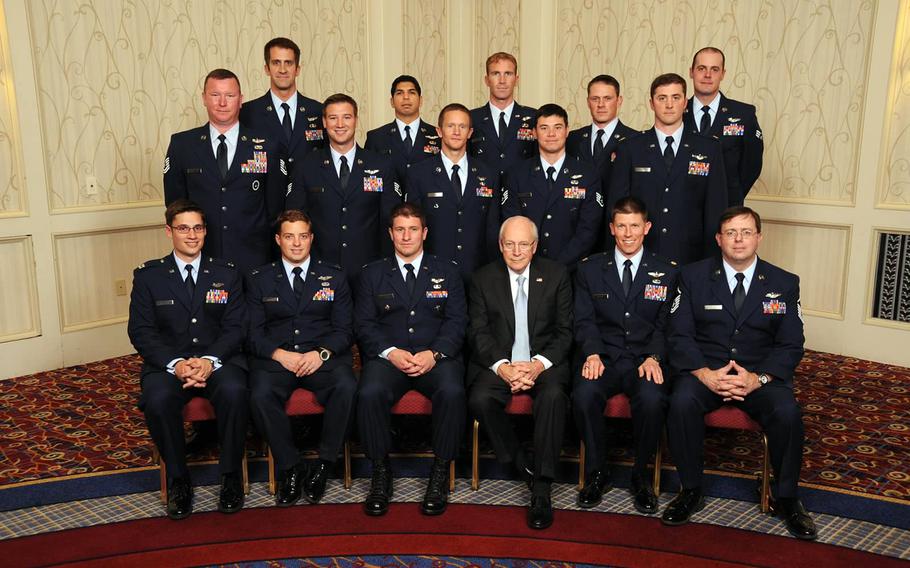 Hours into a rescue mission that saw a flight engineer wounded and their aircraft peppered with bullets, the pilots of two Pave Hawk helicopters polled their crews before going back into the fray.

Was everyone willing and able to go back in?

A positive response sent both crews back into a hail of gunfire. Rebuffed by heavy resistance several more times, they eventually succeeded in pulling their guys out and bringing home the body of a pilot killed earlier in a crash.

In the end, the two rescue pilots would receive the Silver Star — and much of the publicity. But crews on each aircraft made critical decisions that day, pilots and crewmembers maintain. All knew the risk to their lives.

“Honestly, I thought that was my last mission,” said Technical Sgt. Heath Culbertson, who replaced the injured flight engineer in the middle of the mission and would later find a bullet hole in his own helmet.

Pushed out just before dawn April 23, 2011, to locate the pilots of a downed helicopter in the mountains east of Bagram, the two Pave Hawks of the 83rd Expeditionary Rescue Squadron out of Bagram Airfield were led by Maj. Joshua Hallada, pilot of Pedro 83, and his wingman, Maj. Philip Bryant, commander of Pedro 84.

They discovered the wreckage in rugged terrain. One of the two pilots had climbed above it; the other was presumed to be with the craft. Hallada’s crew lowered three pararescue jumpers — known as PJs — to pick up the pilot who was away from the site. Bryant’s crew lowered two PJs at the crash site.

Insurgents opened fire between the two sites, forcing Bryant to pull back. A bullet struck his flight engineer, Tech. Sgt. James Davis, in the leg. The gunner, Tech. Sgt. William Gonzalez, left his weapon to put a tourniquet on the wound.

As Bryant raced his flight engineer to a clinic, heavy fire forced Hallada’s crew to abandon a first attempt to pick up the three PJs and the surviving pilot. The flight engineer had sheared the hoist cable during the first run to prevent dragging the person at the other end, so Hallada touched the helicopter’s front wheel on a boulder while keeping the craft at a hover to allow the men to jump in.

Back at Bagram, Culbertson awakened to a loud banging on his door and was told to jump into Davis’ bloody seat in Pedro 84. The helicopter returned to the scene to join Pedro 83 and make another go at extracting the two PJs on the ground.

Culbertson recalls insurgents scattering like cockroaches, he said. The incoming fire was withering, and he found himself backed away from the helicopter door, by a console.

“I thought, ‘Why are you laying on the console? Are you this scared?’ ” he recalled.

Only later would he realize that a gunshot to his helmet, mere inches from his face, had thrown him back from the door.

The two PJs on the ground — Staff Sgts. Zachary Kline and William Cenna — had found the other pilot’s body and were now taking fire from two directions. Over the next 5½ hours, they would keep insurgents at bay through close air support from A-10s and AH-64 Apaches.

“I knew at the least it was going to be a really long day,” Kline said. “But the thought had totally crossed my mind that we wouldn’t be walking out of there.”

In the following hours, multiple attempts to extract the two men were rebuffed by heavy fire. At one point, the crews were able to survey their aircraft and discovered multiple bullet holes. Culbertson found the damage to his helmet.

“The reality of the situation was apparent to everyone,” Hallada said.

A new urgency forced them back into the fray. An 18-man quick reaction force from the Iowa National Guard, placed on the ground to block insurgents from Kline and Cenna, had taken casualties in need of evacuation. One could still be saved, but the landing zone would be hot.

“They said, ‘If you don’t get him out now he’s not going to make it,’ ” Bryant recalled. “So that’s when Maj. Hallada asked us if we were willing to go in.”

After three rescue attempts pushed back by heavy fire, air support took care of the remaining insurgents, allowing Pedro 83 to extract the QRF casualty and Pedro 84 to pull Kline and Cenna back in, along with the body of the deceased pilot.

After two years and multiple reviews of the events, many participants say the rescue remains their most intense mission in a decade of deployments. Some now teach from their experience, including Bryant at Kirtland Air Force Base in New Mexico, Kline at a class for PJs at the University of New Mexico and Culbertson at Lackland Air Force Base’s Enlisted Air Crew Center of Excellence.

For some it was life-altering. Flight engineer Davis is still receiving pain treatment for a difficult leg wound, former crewmembers said. Culbertson decided soon after the mission to make it his last, calling it the final straw in a series of deployments.

“I went ahead and raised my hand and then got help that I needed,” he said.

Kline and Cenna were submitted for Silver Stars, according to Maj. Jesse Peterson, their combat rescue officer. Cenna was set to receive his in a May 18 ceremony in Alaska, where he serves in a rescue squadron. Kline’s nomination was awaiting approval at the time of this publication.

Hallada and Bryant, awarded their Silver Stars in July, suggested their crews deserved the same recognition.

“Because we’re the aircraft commanders, we got a medal one level up, and that wasn’t our decision,” Bryant said. Hallada said the evidence of each crew’s responsibility is visible in their decision to keep going.

“Everyone saying ‘yes,’ it bolstered my ability to say ‘yes’ and execute,” he said.