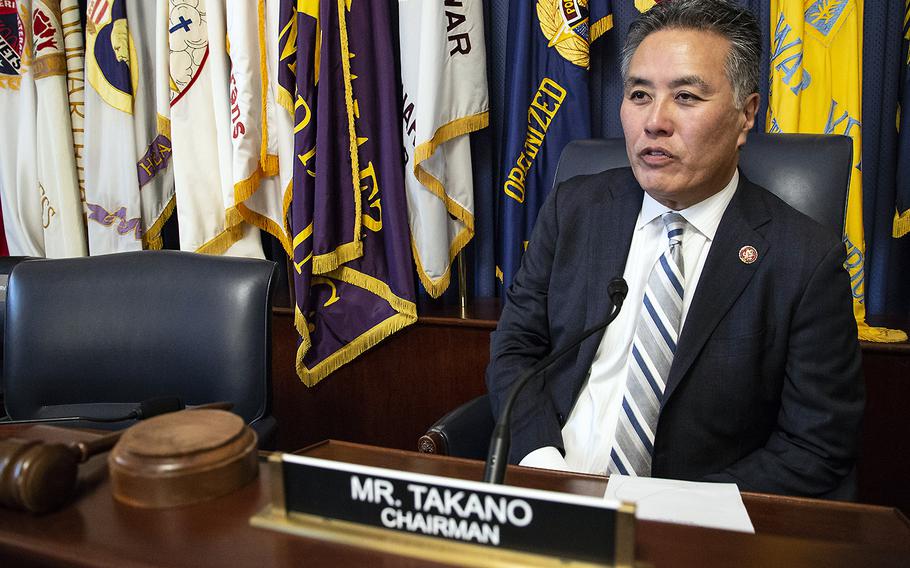 WASHINGTON – The chairman of the House Committee on Veterans’ Affairs plans to hold a hearing in the “imminent future” to analyze rules that the Department of Veterans Affairs publicly released Wednesday to expand veterans’ access to private doctors.

Rep. Mark Takano, D-Calif., blasted the VA for creating the rules “in the dark of night” and announcing them without input from lawmakers and veterans organizations.

“Today’s announcement has raised more questions than answers and it is my intention to hold a full hearing of the Committee on Veterans’ Affairs in the imminent future to fully understand how this will impact access to care for our veterans,” Takano said in a statement.

Under the VA’s proposed rules, veterans who must drive more than 30 minutes to reach their VA mental health or primary care providers – or wait longer than 20 days for an appointment – would be allowed to use a private doctor.

The VA plans to post the proposed rules to the Federal Register, where members of the public will be allowed to provide input. Under the law, the rules must be finalized by the beginning of March.

Carl Blake, executive director of Paralyzed Veterans of America, said his group isn’t opposed to the rule changes. He wants the new standards to be successful but doubts whether the VA has the capability to properly implement them by the June deadline, he said.

“I get the sense they haven’t figured this all out yet, and that’s a problem,” Blake said. “This is far too important to not be sure they have all their ducks in a row, and I’m not sure they do.”

Blake was supportive of Takano’s idea for a committee hearing in order to better understand the costs of the new access standards, whether the VA has the technology to handle the changes and how the agency plans to determine the 30-minute driving standard.

“This is the situation we’re in now, and we have the opportunity to talk more openly about it,” he said. “Congress needs to put the VA in front of them and see if they’ll answer the questions.”

For several weeks, lawmakers and veterans groups have expressed concerns about the VA’s lack of transparency and collaboration on the access standards as the March deadline loomed.

The agency received more criticism Wednesday for releasing the rules without running them past stakeholders. Takano chastised the VA for “hastily rolling out” the access standards.

Bob Wallace, executive director of Veterans of Foreign Wars, said: “We are disappointed VA chose not to incorporate the voice of our 1.6 million members in the decision-making process.”

The Mission Act will replace the Veterans Choice Program, which was created in response to the 2014 VA wait-time scandal. Under that program, VA patients are now allowed to go outside the system when they live more than 40 miles driving distance from a VA facility or it is estimated their wait for a VA appointment is longer than 30 days.

The VA estimates the new rules would extend eligibility for community care from 8 percent of VA patients now to somewhere between 20 and 30 percent.

VA Press Secretary Curt Cashour said the changes were estimated to increase costs by $1.1 billion in the remainder of fiscal year 2019. The new community care program is scheduled to go into effect in June. The end of the fiscal year is Sept. 30.

Takano claimed the rules would put the VA “on a pathway to privatization.” Veterans groups, seeing the access standards for the first time Wednesday, said there were a lot of outstanding questions.

“Based on the information provided [Wednesday]… there are too many unanswered questions to evaluate whether the plan will improve veterans’ health care outcomes,” said Joy Ilem, legislative director for Disabled American Veterans. “We need more information about how these access standards will affect veterans who choose VA for their care, whether they are realistic and feasible and whether sufficient new funding will be provided.”

“We are encouraged by the mental health provisions expressed, and look forward to more detailed information on access standards - especially on the data and science behind the selected wait times and distance-to-care criteria,” said Rene Bardorf, WWP’s senior vice president of government and community relations.

Another veterans group, AMVETS, commended the VA for their proposed rules and argued the unanswered questions shouldn’t stand in the way of progress.

“Our veterans need access to care right now, not when the VA and others have devised the perfect plan, which may never realistically happen,” said AMVETS Executive Director Joe Chenelly. “What we have been presented today will help get us closer to a model of care that saves lives, improves quality of life and adequately reflects our commitment to rewarding those who defended our country.”

“We worked diligently for more than a year to find bipartisan compromise that resulted in passage of the VA Mission Act, and we will continue to work collaboratively with the VA and other stakeholders to guarantee that both the implementation of the VA MISSION Act and the new Veterans Community Care Program are a success from day one,” Roe and Isakson said.

Takano’s office did not provide a date when a hearing on the issue could occur.