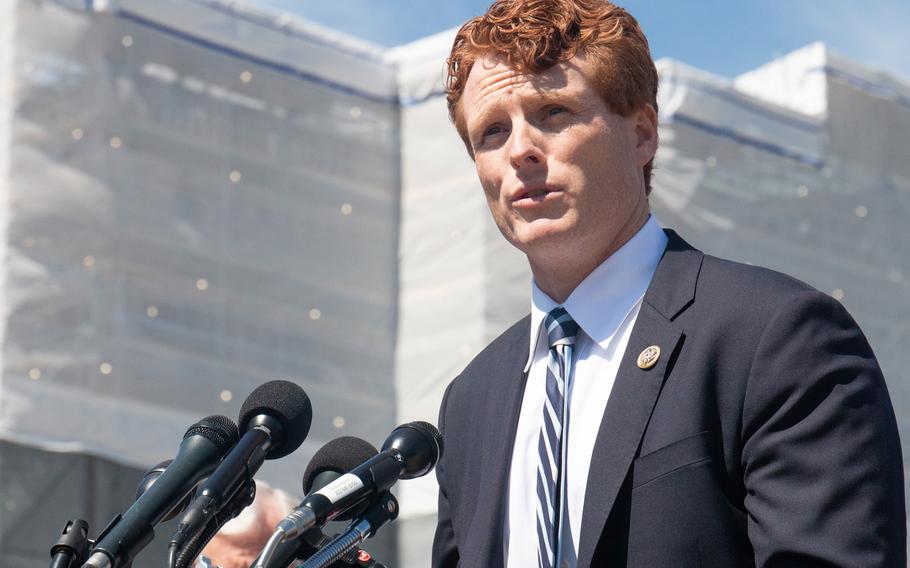 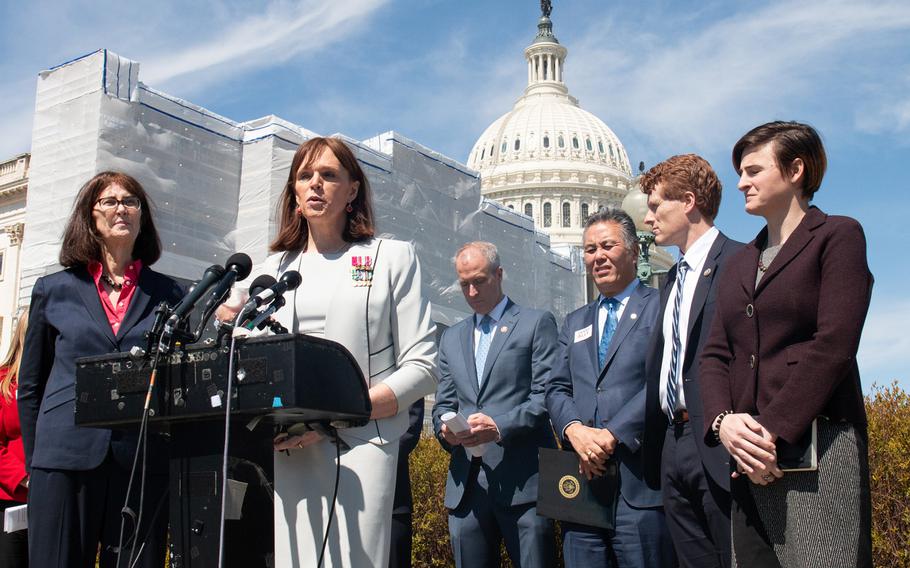 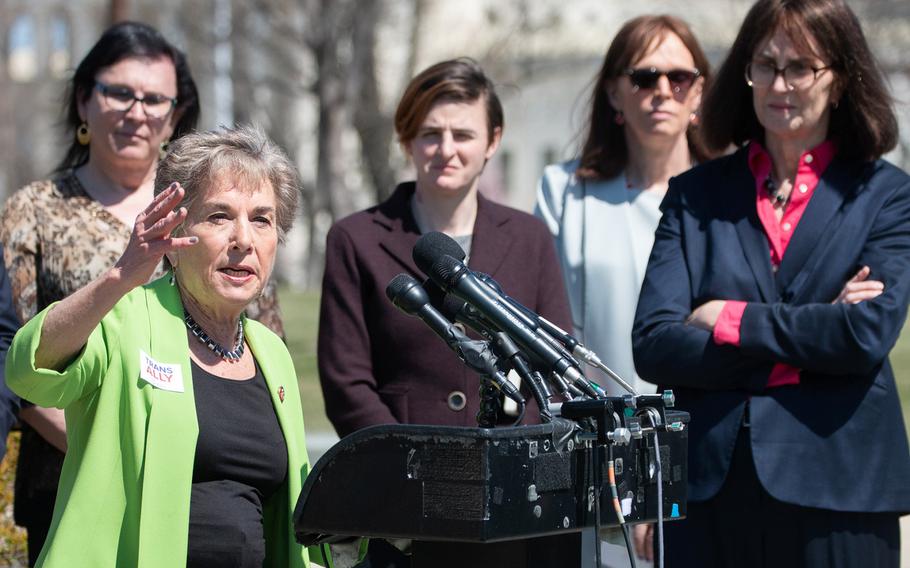 Buy Photo
Transgender servicemembers and veterans gathered at the Capitol in Washington, D.C., on Thursday, March 29, 2019, to speak about transgender rights and to condemn a Trump administration policy that would ban transgendered individuals from serving in the military. (Michael S. Darnell/Stars and Stripes)

WASHINGTON — The House approved a resolution Thursday condemning a controversial Trump administration ban of transgender personnel in the military ahead of the plan’s potential implementation next month.

The Democrat-controlled chamber approved the largely symbolic resolution in a vote of 238 to 185, including five Republicans who voted in favor of the measure.

“Today, this House has the chance not to repeat the mistakes of our past, to move one step closer to that sacred promise by telling brave trans men and women in uniform that they cannot be banned from military service because of who they are,” Rep. Joe Kennedy III, D-Mass., author of H.Res. 124, said ahead of Thursday’s vote.

Next month, a new Pentagon policy is slated to reverse a 2016 initiative that lifted the ban on transgender men and women serving in the military, but it will allow people serving now to remain in the service. It disqualifies from service all transgender people who require or have already undergone gender transition, and bans people with current or recent gender dysphoria diagnosis other than in rare circumstances.

Kennedy’s resolution, which is unlikely to gain further traction through the Republican-controlled Senate, expresses opposition to banning service in the armed forces by openly transgender individuals. It states the service of transgender individuals has had “minimal” impact on the military since it was permitted in 2016. The resolution estimates thousands of transgender personnel now serve in the military and disputes the Defense Department contention that there is scientific uncertainty regarding the efficacy of related care.

Instead, the policy is based on discrimination, the resolution contends.

“We believe the policy the Pentagon is putting forward is unfair and based on ignorance and bigotry and will actually harm national security,” Rep. Adam Smith, D-Wash., chairman of the House Armed Services Committee, said from the lower chamber’s floor ahead of the Thursday vote.

Democrats have also argued that military spending for care of transgender personnel is less than 1 percent of its overall budget for active-duty servicemembers, reaching $2.2 million in 2017. That’s five times less than it would cost to retrain a fifth-generation fighter pilot and less than 10 times the annual amount spent on erectile dysfunction medication.

“This is an act of cruelty,” said House Speaker Nancy Pelosi, D-Calif. “The president’s ban… is cruel and arbitrary, a decision designed to humiliate the transgender Americans who are risking and giving their lives for the United States of America. There is no moral justification for this ban, which violates every value of American democracy and betrays our fundamental belief in fairness, dignity and respect.”

The debate comes on the heels of a Tuesday move by the U.S. Court of Appeals for the District of Columbia to drop a final, remaining injunction stopping implementation of the ban. Some experts said they expected the decision to allow the Defense Department to proceed with its plans to implement the ban as early as next month.

In January, the U.S. Supreme Court issued a 5-4 ruling in favor of the ban, allowing the measure to stay in place pending several lawsuits fighting the move.

The U.S. Court of Appeals for the District of Columbia previously said a lower court judge erred in blocking the policy, also known as the “Mattis Plan,” which was named for former Defense Secretary Jim Mattis who drafted its specifics. The policy originated from a proposal in 2017 by President Donald Trump.

The White House effort to ban transgender people from military service was subsequently mired in confusion and litigation for nearly two years after Trump fired off a series of tweets that ignited the controversy, some experts have said.

“After consultation with my Generals and military experts, please be advised that the United States Government will not accept or allow transgender individuals to serve in any capacity in the U.S. Military. Our military must be focused on decisive and overwhelming victory and cannot be burdened with the tremendous medical costs and disruption that transgender in the military would entail. Thank you,” Trump’s July 26, 2017 tweets read.

The 2016 Pentagon policy to open the military to transgender individuals had remained in place, but a Trump administration effort to reverse it created a chilling effect for potential recruits and heightened fears for some servicemembers, some advocates for transgender personnel have said.

Rep. Susan Davis, D-Calif., said its unfortunate the Trump administration is attempting to ban transgender people from service especially when the Army, the Navy and Air Force are struggling to meet recruitment goals.

“This administration is resorting to misinformation, misinformation to exclude capable, qualified people from service to their country,” Davis said Thursday from the House floor. “We cannot be turning away dedicated, able-bodied recruits simply because they happen to be transgender.”

About a month after the Trump tweet, the president formally issued a new directive to the Defense Department to issue the ban. With that, Mattis issued a new 48-page policy in March 2018 to ban most transgender individuals from serving in the military. The transgender military ban by Trump had been blocked by four federal judges, with injunctions pending the outcome of four discrimination lawsuits filed by transgender individuals and advocates against the federal government.

Other senators filed legislation to block a military transgender ban. Sen. Kirsten Gillibrand, D-N.Y., who through Senate Armed Services Committee hearings last year, was able to confirm with all four military service chiefs that transgender servicemembers have not impacted morale or created problems for the services. Also, current and former top U.S. medical officials charged the ban was not based on a medically valid reason.