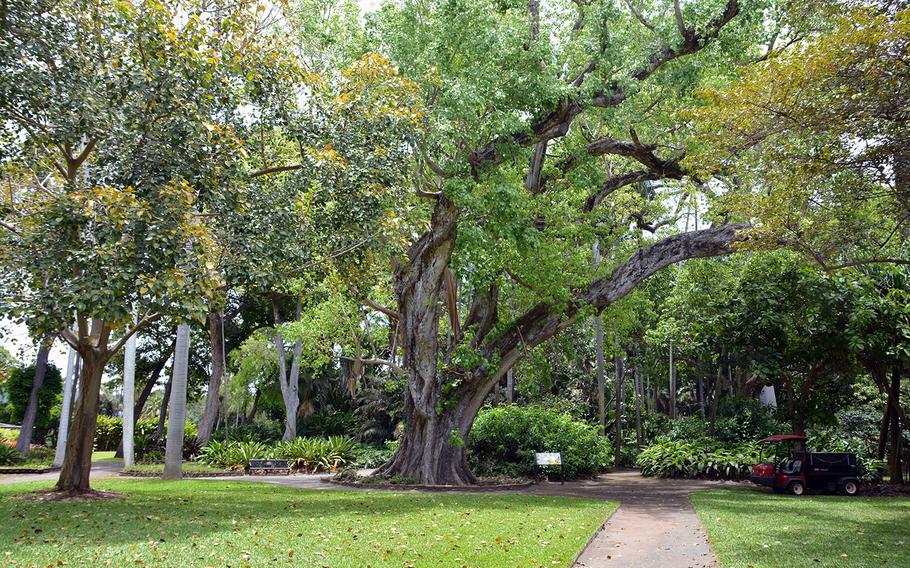 Buy Photo
The fruit of the cannonball tree is filled with foul-smelling pulp. (Wyatt Olson/Stars and Stripes) 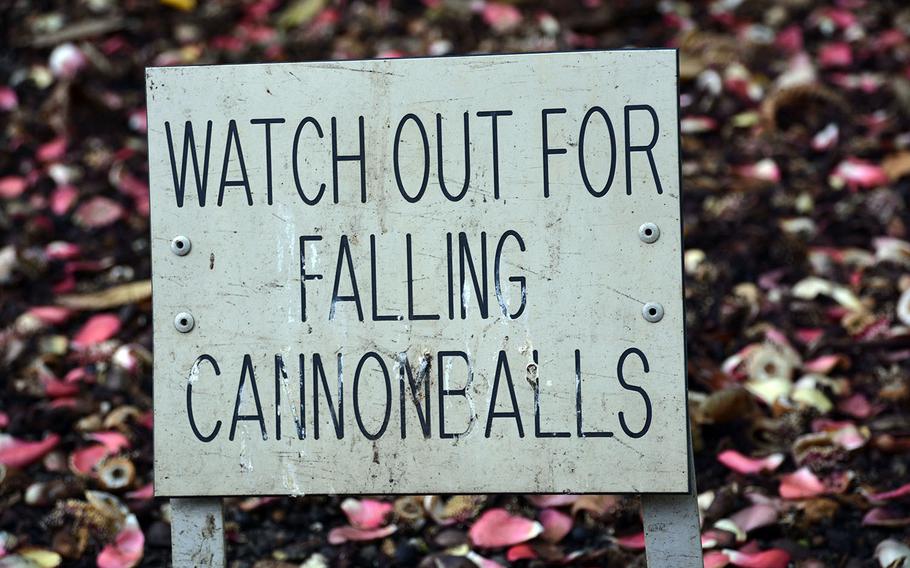 Buy Photo
A helpful sign posted at the foot of looming cannonball tree, whose fruit grow directly out of the trunk and can carry a wallop to anyone standing below. (Wyatt Olson/Stars and Stripes) 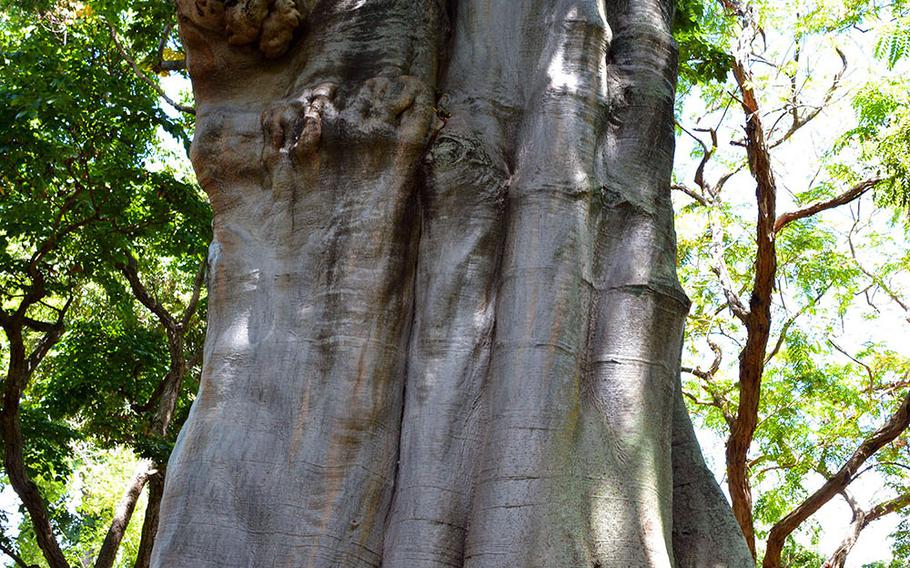 Buy Photo
A visitor to Foster Botanical Garden in Honolulu stands beside a massive baobab tree. The baobab, an African native, possesses the largest trunk in the garden. In its native country bats drink the nectar from its flowers, baboons eat the fruit and giraffes reach its hard-to-get leaves. (Wyatt Olson/Stars and Stripes) Buy Photo
Foster Botanical Garden is a 15-acre oasis of nature and tranquility in the busy city of Honolulu. (Wyatt Olson/Stars and Stripes)

Nestled on the edge of downtown Honolulu, the Foster National Garden is home to scores of rare and unique flowering plants and trees from around the tropics. It’s also home to two of the world’s most malodorous botanical wonders: the corpse flower and the cannonball tree. The bloom of the former is a rare treat; the fruit of the latter can be sniffed year-round.

To be fair, there’s a lot more to the 14-acre garden than these two foul-smelling plants, fun as they are. That’s because the Foster National Garden is the city’s oldest botanical garden, with the oldest of the towering trees that punctuate the property planted in the 1850s.

Perhaps one of the most impressive of the garden’s trees is the ficus religiosa, or sacred fig — commonly referred to as a bodhi tree due to its importance in Buddhism. (The Buddha was said to have attained enlightenment beneath the shade of a bodhi tree.)

The sapling that grew into this impressive tree was given to Mary Foster, the one-time owner of the garden’s land, in 1913 by the Mahabodhi Temple in India. The tree’s outstretched branches form a huge canopy that envelops the garden’s entrance, welcoming visitors into the garden.

Foster, a devoted Buddhist and descendant of Hawaiian royalty, would later bequeath the land to the City of Honolulu in 1930, requesting that the city “accept and forever keep and properly maintain” the gardens as a public park.

Unlike some of the city’s other gardens devoted to Hawaiian indigenous flora, the Foster’s living collection comes from jungles around the world.

Among the garden’s highlights is a macadamia tree, whose nuts are almost synonymous with Hawaii.

Despite the prominence of the macadamia industry throughout the state, the tree is actually indigenous to Australia. Macadamia nuts also have the reputation of being an expensive variety commodity, due partially to the fruit’s incredibly thick and troublesome shell. A macadamia nut requires nearly 300 pounds per square inch of pressure to crack — meaning a highly specialized technique is required to properly crack the shells without breaking the nut inside.

If you’re looking to get up close and personal with living giants, make a pit stop at the base of the quipo and/or the baobab. The quipo, which boasts an 8-foot diameter, stands like a cement-gray tower among the many other plants and trees at the Foster. Its soft, balsa-like wood is used to make canoes and rafts in some parts of the world.

The baobab, a large and bulbous tree native to Africa, possesses the largest trunk of any tree in the garden. A multi-purpose plant, the baobab is a tried and true favorite among residents of Africa both big and small. Bats drink the nectar from its flowers; baboons eat its fruit; giraffes seek out its hard-to-get leaves — and humans use all three, with the bark for fiber, the fruit in drinks, and the leaves in medicine.

Another imported tree that’s become dear to the heart of Hawaiians is the coffea arabica, which was first brought to Hawaii in the early 1800s — hundreds of years after coffee beans had become a staple drink in the Middle East and Europe.

Coffee is now a major commercial crop in Hawaii, with pure Kona coffee roasts selling for about $30 per pound.

But what about those stink-producing plants?

When I last visited the Foster Botanical Garden in July, a garden staffer told me the park’s famous amorphophallus titanium, or corpse flower, was just days away from blooming. Native to the Sumatra region in Indonesia, the blooming flower draws in carrion beetles and flies with its infamously pungent and overwhelming smell.

The plant, which stands about 5 feet tall, smells exactly as the name implies. To me, the smell that day was akin to the faint whiff of a dead mouse. Corpse-y, yes — but nothing to raise a stink about yet.

A corpse flower bloom, however, is a rare spectacle. The plant blooms irregularly — sometimes going without a bloom for many years.

Visitors in search of an unforgettable olfactory experience should also not miss the Foster’s two cannonball trees — a rare specimen native to South America.

When I first approached this tree, I saw on the ground what looked to be rusty, old-fashioned cannonballs.

“Don’t get too close,” a garden regular advised me as I bent over to inspect one of the strange, large fruit. “If one drops off the tree, it can split your skull.”

If a blow to the head from a wayward cannonball tree fruit doesn’t leave you dizzy, the smell of the fruit certainly will. The ground surrounding the tree is littered with cracked and rotting pieces of the fruit, which contain a blue, oozy pulp with a smell as distinct as it is difficult to describe. (The closest way to replicate the smell: Take old, worn gym socks and stuff them with overripe bananas and potatoes. Leave locked and sealed in your car’s glove compartment during August until suitably foul. Enjoy.)

Whether you’re in search of something sweet or something unspeakably sour, the Foster National Garden is the perfect way to enhance the sights (and smells) of any Hawaiian vacation.

COSTS: Adult tickets are $5, while tickets for children ages 6-12 is $1; admission for children aged 5 and under is free. A brochure available at the entrance provides visitors with a self-guided tour. A free guided tour is given each day at 10:30 a.m.

FOOD: The garden has no cafe or vending machines — so bring beverages, snacks or a picnic lunch.INFORMATION: Ample free parking is offered in the Foster National Garden parking lot. Wear casual shoes for walking on uneven and sometimes muddy ground. Bring a blanket if picnicking, as the grass can be damp. Online: www.honolulu.gov/cms-dpr-menu/site-dpr-sitearticles/568-foster-botanical-garden.html