'He wanted to ... finally do something' 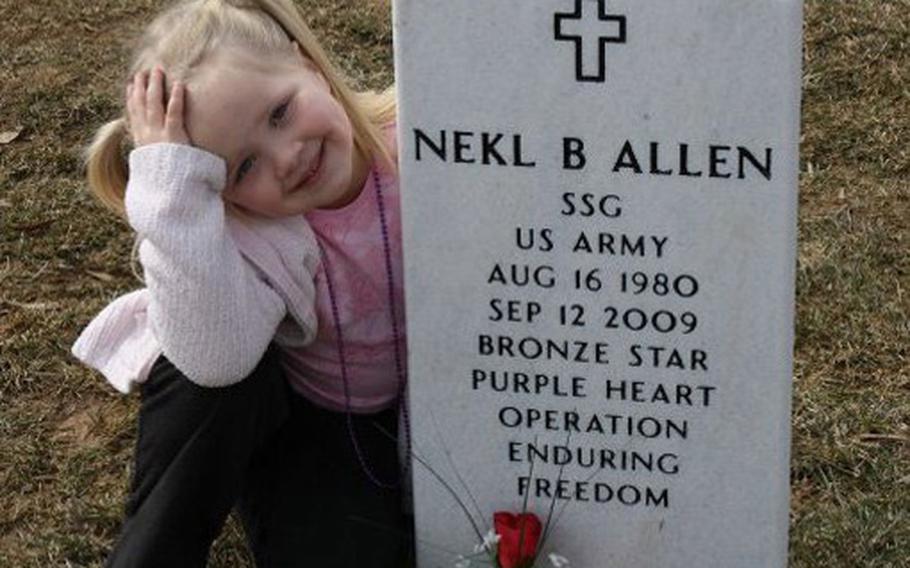 Staff Sgt. Nekl Allen's daughter, Grace, poses with his headstone at Arlington National Cemetery in February 2010. Allen was killed on Sept. 12, 2009, when a bomb exploded beneath his MRAP in Afghanistan. (Courtesy of Amy Allen)

Staff Sgt. Nekl Allen's daughter, Grace, poses with his headstone at Arlington National Cemetery in February 2010. Allen was killed on Sept. 12, 2009, when a bomb exploded beneath his MRAP in Afghanistan. (Courtesy of Amy Allen) 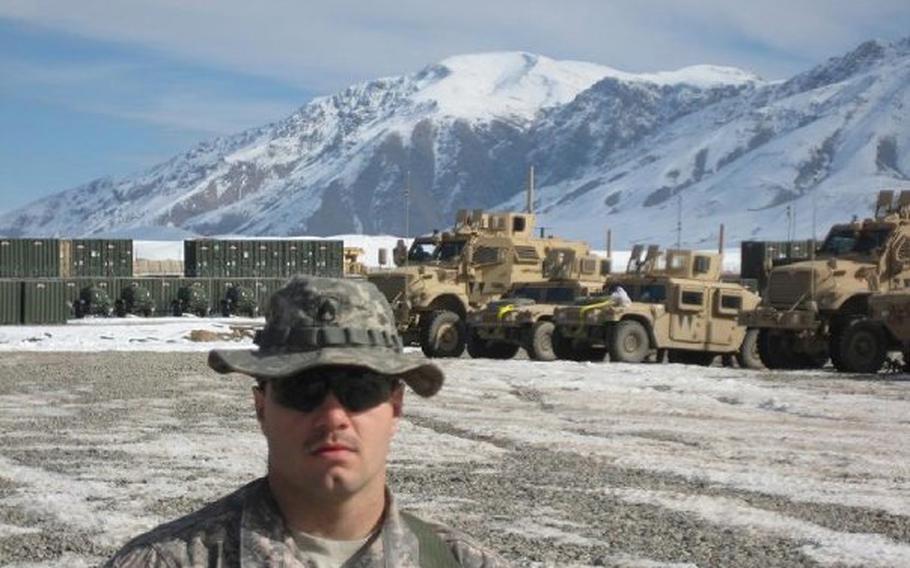 Staff Sgt. Nekl Allen joined the Army in the wake of the Sept. 11, 2001, attacks. He served two deployments in Iraq before going to Afghanistan in early 2009. On Sept. 12, 2009, a bomb exploded beneath his vehicle, killing him and a fellow soldier. (Courtesy of Amy Allen) 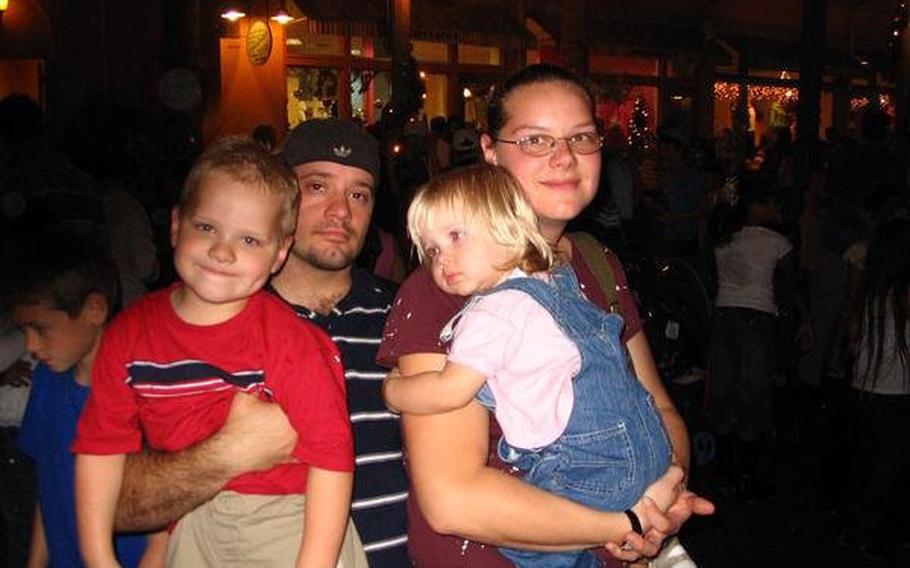 Nekl Allen and his wife, Amy, pose with their children Michael and Grace during a 2007 trip to Florida. (Courtesy of Amy Allen) 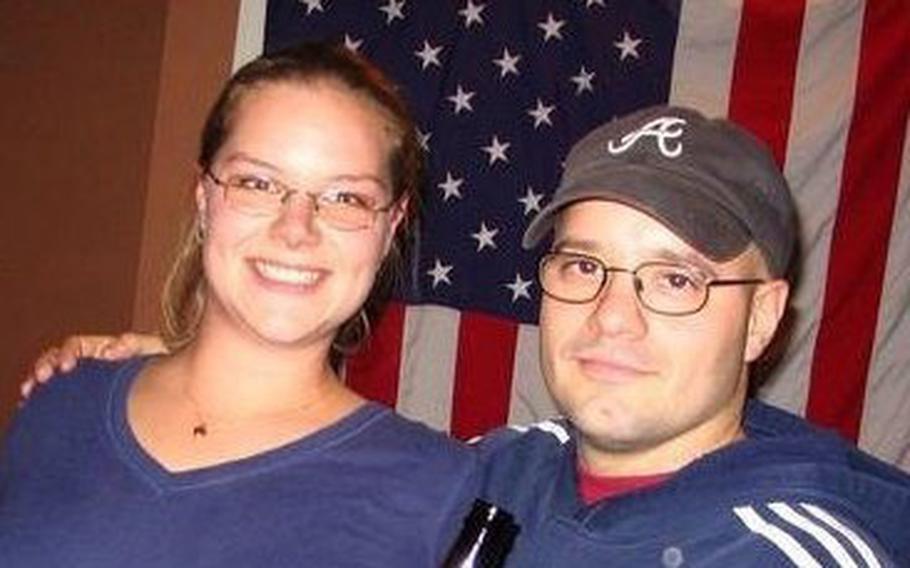 Amy and Nekl Allen were awakened by a phone call from Amy's mother to tell them that the World Trade Center had been attacked on Sept. 11, 2001. Shortly after, Nekl told Amy that he wanted to join the Army. (Courtesy of Amy Allen) 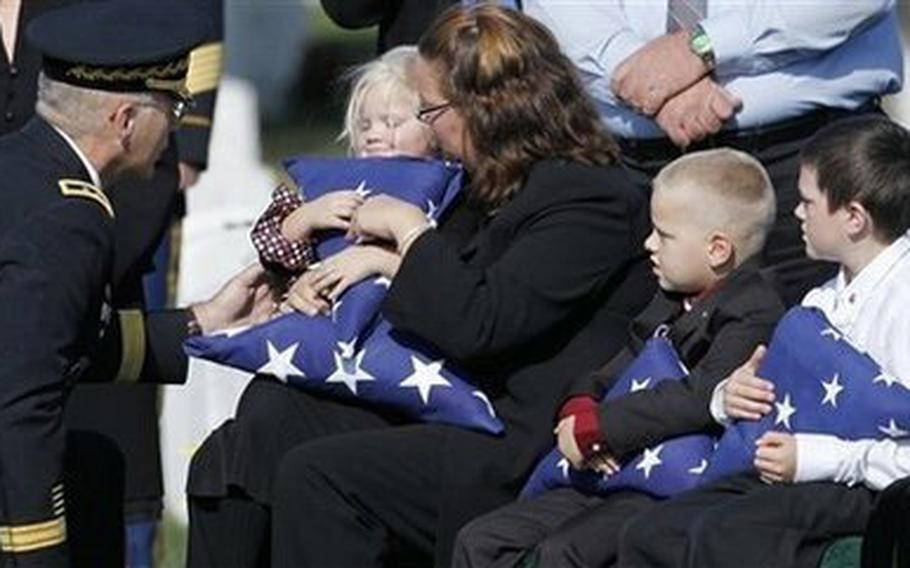 The family of Staff Sgt. Nekl Allen is presented with folded American flags at his funeral in 2009. Allen, who joined the Army in response to the 9/11 attacks, was killed when a bomb exploded beneath his vehicle in Afghanistan. (Courtesy of Amy Allen)

Nekl Allen was sleeping soundly beside his fiancee, Amy, when the phone rang.

It was her mother, hysterical, crying out that they must turn on the TV immediately. The images on the screen are now iconic. Two towers, impaled by airplanes, flames and smoke rising. Nekl and Amy sat transfixed, staring in silence and trying to understand.

Then the towers fell and the world changed. Their world more than most.

On Sept. 10, 2001, when Amy envisioned their future together, she saw their American dream. They&rsquo;d get married, work their jobs, have children and raise them up right. They&rsquo;d retire and live happily ever after in upstate New York.

&ldquo;Just live day to day and not have too much excitement,&rdquo; she said.

When the gravity of the situation revealed itself, Nekl revised the plan. He would join the Army. Amy didn&rsquo;t protest. That&rsquo;s how it was. When one of them had a strong conviction about something, the other had their back.

At a recruiter&rsquo;s suggestion, they moved up their wedding to Oct. 12 so they would be sure to get all available benefits. Before long, Amy was pregnant with their son, Michael &mdash; Nekl had a son, Christopher, from a previous relationship &mdash; and in May 2002, after a brief delay, Nekl went off to basic training.

He was a natural soldier, infantry and he loved it, even when they lived in a trailer outside Fort Riley, Kan., making ends meet on an enlisted man&rsquo;s salary. When the Iraq War began, Nekl was itching to go, and before long, he got his wish. His unit deployed in the fall of 2003.

&ldquo;As it got closer and closer, he was, like, giddy,&rdquo; Amy said. &ldquo;Of course, he was upset to leave his family, but he wanted to go over and finally do something.&rdquo;

He came home a year later with a less romanticized view of war but still believed deeply in what he was doing. When he left for Iraq again, from Fort Campbell, Ky., in 2005, his daughter, Grace, was 6 weeks old. He ached to think about leaving her, about how much she&rsquo;d change while he was gone, but 11 months later he was home safe and reunited with his family.

Soon, the Awakening took hold in Iraq and the intensity of the war waned. The Allen family moved to Rhode Island, where Nekl now worked as a recruiter.

&ldquo;He hated it,&rdquo; Amy said. He was no salesman. He was a combat soldier, decorated with the Army Commendation Medal, among other awards.

After a year of recruiting, his next duty station was Fort Drum, N.Y., a three-hour drive from the Allens&rsquo; hometown of Rochester. The fighting in Afghanistan had erupted with renewed vigor, and Nekl got orders to go there in early 2009 to help put down the insurgency in the terrorist haven that gave birth to the 9/11 attacks.

Something about this assignment felt different, though. He was deploying with a new unit to a new country and a set of circumstances far different than those he encountered in Iraq. He was nervous.

In the days after he left, Amy went online and designed picture books for the kids so they could still see their dad every day. Photos of him, photos of them all together in happy moments.

On Sept. 12, 2009, Amy and the kids were enjoying a lazy Saturday. Not long after waking from an afternoon nap, Amy noticed a gold Dodge Intrepid drive slowly past. She thought it odd, but disregarded it until one of the kids came to tell her someone was at the door. When she got there she saw two soldiers in dress uniforms, a captain and a chaplain.

As she did eight years and a day earlier, Amy froze and stared.

&ldquo;You think of these things, the morbid thoughts, and you think, &lsquo;What would I do? How would I react?&rsquo;&thinsp;&rdquo; she said. &ldquo;I don&rsquo;t think it matched anything I&rsquo;d imagined.&rdquo;

Staff Sgt. Nekl Allen, 29, was killed earlier that day in Wardak province when a bomb exploded beneath his vehicle and insurgents attacked with small-arms fire. Another soldier, Spc. Daniel Cox, 23, was also killed and three others were injured.

Elsewhere in New York, Nekl&rsquo;s parents got the same knock on the door, as did his oldest son, Christopher, who got the news two days before his 10th birthday.

Grace was 4 and Michael was 7 when their father died. The picture books that Amy had made now help them cling to precious memories of him, of wrestling in the living room or the family fishing trips where Dad was the only one who would touch the fish.

Last year, Amy and the kids piled in a car on Sept. 11 and drove to Virginia with Nekl&rsquo;s best friend, Wayne Whiteside. On Sept. 12, they visited Nekl&rsquo;s grave at Arlington National Cemetery, Section 60. They&rsquo;ll repeat the new tradition this year and bring along with them Liza Winans, Cox&rsquo;s fiancee. After their soldiers were killed, she and Amy developed a friendship built on shared sorrow.

&ldquo;We talk a lot about it and we help each other,&rdquo; Amy said. &ldquo;It turns out Dan had also joined the Army because of 9/11. He was still in high school when it happened and two weeks after graduating, he joined.&rdquo;

The wars in Iraq and Afghanistan have now claimed more than 6,000 American servicemembers, many of them young men not unlike Nekl, driven to serve by the aftershocks of a dark day. Amy tells his story so that others might remember 9/11 as more than a drama played out on their television screen.

&ldquo;To remind people that it didn&rsquo;t just happen, it really caused people to do things about it,&rdquo; she said. &ldquo;To show that people actually got off their butts and did something.&rdquo;