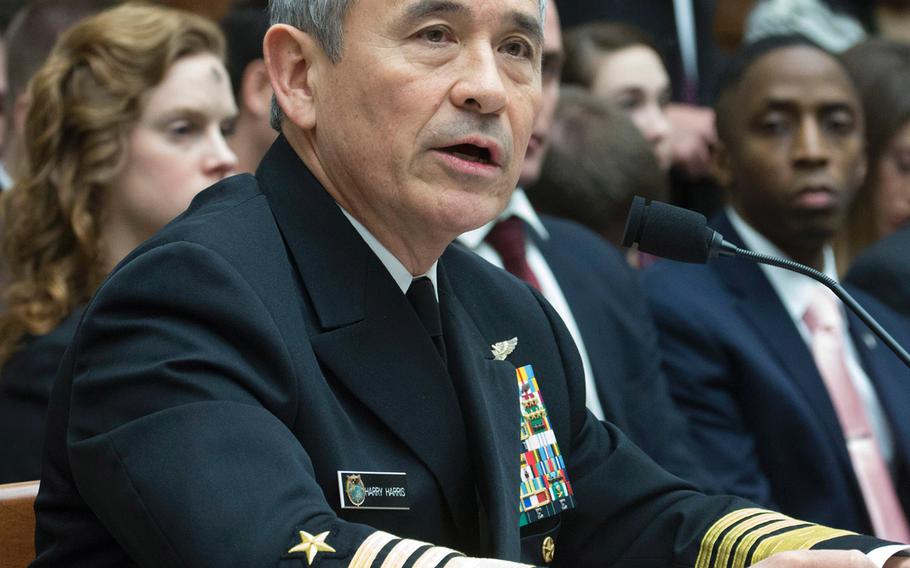 WASHINGTON — The outgoing head of Pacific Command told a panel of House lawmakers Wednesday that the State Department and U.S. diplomatic efforts are critical to national security.

The comments were part of a House Armed Services Committee hearing examining military posture and security challenges in the Pacific region.

On Monday, the Trump administration unveiled its 2019 budget plan, which includes controversial cuts to the State Department and other diplomacy efforts.

“A weak State Department means you are going to have to have a much stronger Defense Department,” said Navy Adm. Harry Harris. “Diplomacy and military capabilities and defense go hand in hand.”

Harris, who is slated to retire this year and is Trump’s pick to be the next ambassador to Australia, suggested the diplomacy efforts will be critical as the U.S. faces growing threats in the Pacific.

In recent days, more than 1,200 veterans and 150 retired generals wrote congressional leaders rejecting the proposed cuts to the international affairs budget, which includes the State Department and other diplomacy efforts.

This comes as Trump administration officials have sent mixed messages on diplomacy, leading some congressional members to worry that escalated U.S. rhetoric with North Korea could inadvertently lead to a costly and deadly war.

“I’m really concerned about this new budget and its significant cuts to the State Department,” said Rep. Jacky Rosen, D-Nev., who raised the questions with Harris. “Combating the threat of North Korea, it’s going to require a lot of strong cooperation … just like we are heading off China’s attempts to become the world’s leading military and economic power. It’s going to necessitate us strengthening our alliances.”

Wednesday’s hearing covered a wide scope of issues facing the military in the Pacific region, from speculation on North Korean leader Kim Jong Un’s motivations to a more crucial need for ground-based interceptors in Hawaii to increased threats in the area.

Harris, who submitted 58 pages of prepared testimony, said he believes Kim is angling for a unified Korean Peninsula. And he agreed the U.S. will need to do more to head off China’s efforts to take over as a dominant power.

“U.S. interests in the Indo-Pacific are real and enduring, while the growing challenges to our interests are daunting and cannot be overstated,” Harris said in his prepared remarks.