Hang out under a 12th century stone bridge in Regensburg The historic Steinerne Bruecke, or Stone Bridge, in Regensburg, Germany, July 7, 2020. The bridge, which dates back to the 12th century, provides tranquil views of much of the city. (Immanuel Johnson/Stars and Stripes)

The historic Steinerne Bruecke, or Stone Bridge, in Regensburg, Germany, July 7, 2020. The bridge, which dates back to the 12th century, provides tranquil views of much of the city. (Immanuel Johnson/Stars and Stripes) 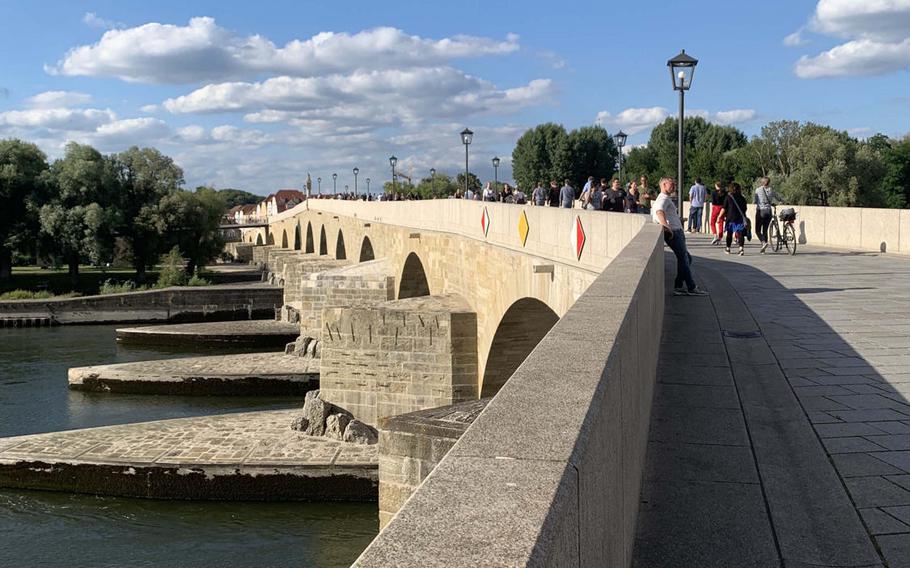 The historic Stone Bridge over the Danube River in Regensburg, Germany on July 7, 2020. (Immanuel Johnson/Stars and Stripes) 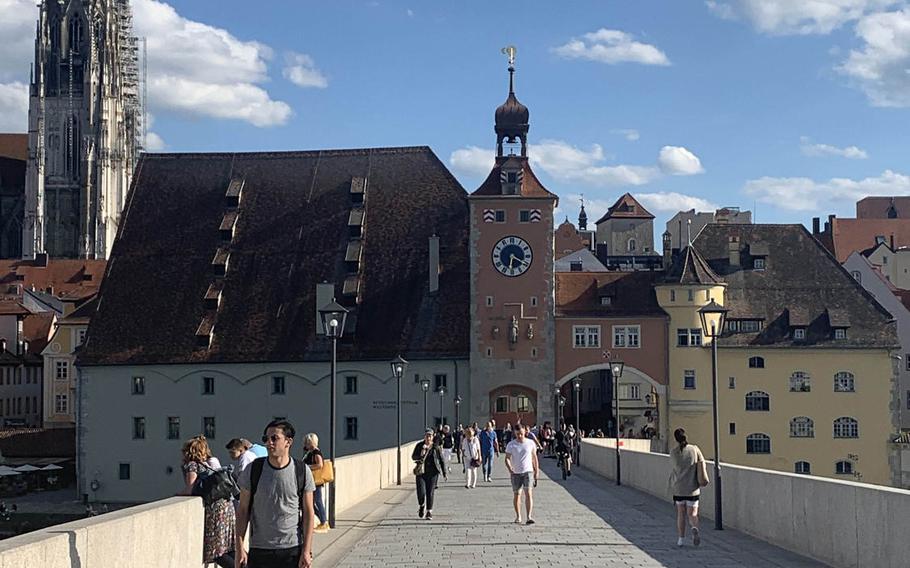 The historic Steinerne Bruecke, or Stone Bridge, in Regensburg, Germany on July 7, 2020. St. Peter's Cathedral, another city attraction, is in the background at left. (Immanuel Johnson/Stars and Stripes) The historic Steinerne Bruecke, or Stone Bridge, in Regensburg, Germany, dates back to the 12th century. Sitting below the bridge allows you to see the Danube River and watch the sun set. (Immanuel Johnson/Stars and Stripes) Regenburg, Germany's historic Stone Bridge dates back to the 12th century. The bridge provides tranquil views of much of Regensburg. (Immanuel Johnson/Stars and Stripes)

Beer and bratwurst — they’re something the Germans are known for the world over.

And one of the pleasures of an assignment in Germany is the chance to enjoy both in picture-book surroundings. Few places offer a better chance to dip into German “toy town” charm than the city of Regensburg and its Old Stone Bridge.

The bridge was constructed in the 12th century by “brilliant bridge-builders,” according to the Regensburg official website.

My personal favorite thing to do is to grab a local brew and some street food, then take a seat below the bridge and hang out with friends. During the coronavirus pandemic, there is the added benefit of keeping safe distances since there is ample space, either on the bridge or below along the banks.

The peak times for the bridge and the surrounding area on the weekends are from 7-10 p.m. If you are looking to snag a great view, it doesn’t hurt to arrive earlier.

The Old Stone Bridge is one of Regensburg’s renowned architectural monuments, so it’s especially popular during the summer vacation months. It’s about 1,000 feet long and offers great views of the old Bavarian city.

If you decide to hang out below the bridge, you can dip your feet into the Danube River. Fair warning: It does get colder at night and the water moves fast. But it’s refreshing on hot summer days.

The bridge is also right by the city’s “Wurstkuchl” restaurant, a legendary sausage eatery that is believed to be one of the oldest restaurants in the world. It’s been running continuously for more than 500 years.

When you’re done hanging out by the bridge, check out the city, which is renowned for its well-preserved medieval architecture and has been designated a UNESCO World Heritage Site. St. Peter’s Cathedral is a must — the elaborate gargoyle sculptures and stained glass windows make the church one of the best known of Regensburg’s landmarks.

If you want to navigate from the modern town of Regensburg to the old one, electric scooters are available to be used throughout the city and on either side of the bridge. But remember, it’s illegal to drink and scoot.

Only about 40 minutes by car from Hohelfels and about an hour from the Grafenwoehr area, a stop in Regensburg is a must while stationed in Bavaria.

DIRECTIONS: Regensburg is accessible on the A3, the A93 and by local roads. The Weiden train station goes to Regensburg.

FOOD: Eateries are located all around the old town area