Hagel calls for full review of all base security, clearance procedures 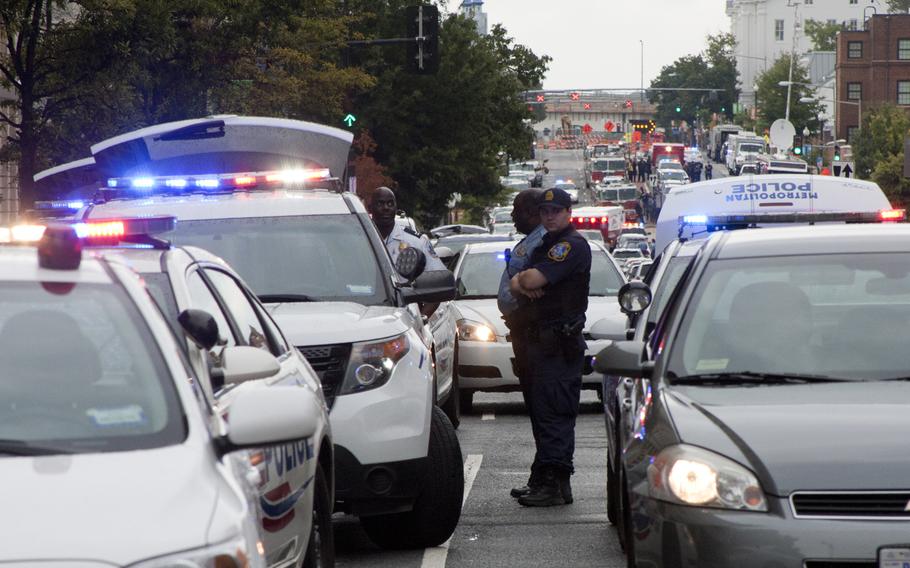 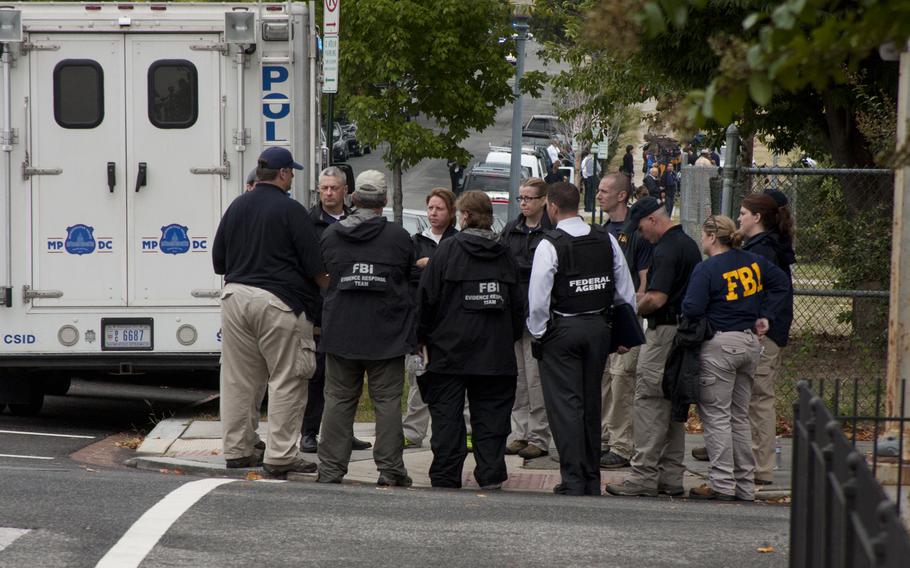 Buy Photo
The FBI respond to the scene of a shooting at the Washington Navy Yard that left 13 people dead on Sept. 16, 2013. (C.J. Lin/Stars and Stripes) 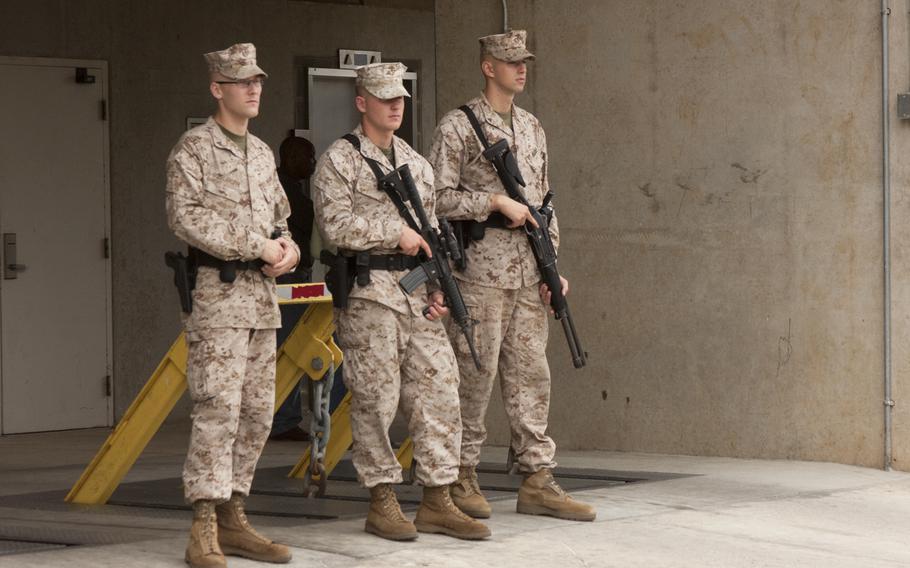 Buy Photo
Marines at Marine Barracks Washington are on alert after a shooting at the nearby Washington Navy Yard that left 13 people dead on Sept. 16, 2013. (C.J. Lin/Stars and Stripes) 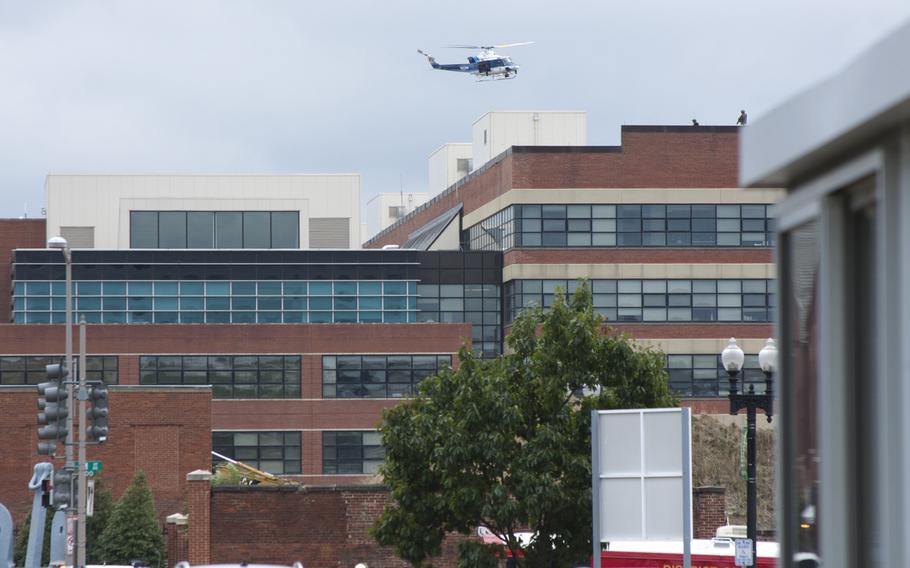 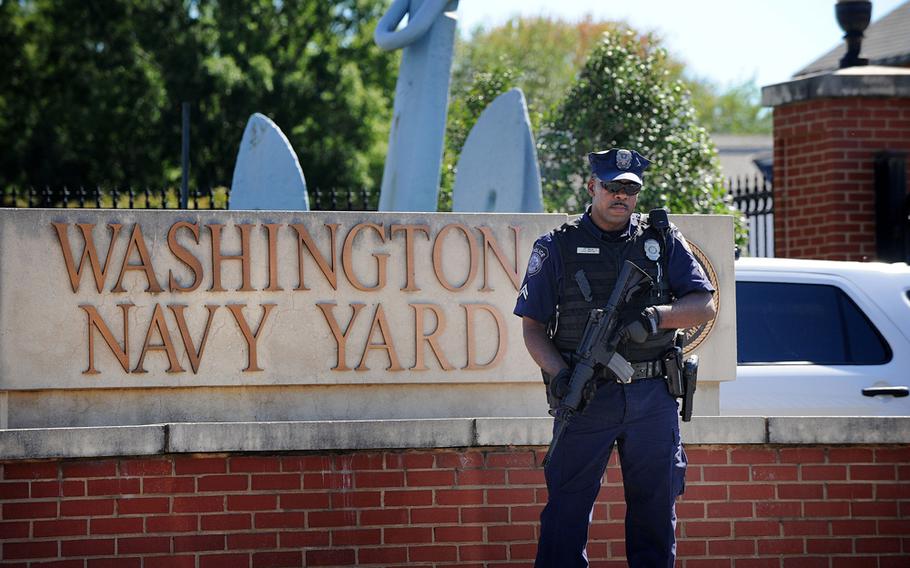 A police officer stands guard at the front gate of the Washington Naval Yard September 17, 2013 in Washington, D.C. Aaron Alexis, who had been discharged by the Navy in 2011 after what an official described as a "pattern of misconduct" staged a two-hour rampage Monday at the Washington Navy Yard, killing 12 people before being shot to death by law enforcement officials. (Olivier Douliery/Abaca Press/MCT)

“We will do everything possible to prevent this from happening again,” Hagel told reporters at a Pentagon press conference. “Where there are gaps, we will close them … Where there are failures, we will correct them. We owe the families of the victims nothing less.”

Alexis, 34, was a Navy veteran who held valid security clearance passes for IT work at the base. But news reports have indicated he showed numerous signs of mental instability over the last decade, including multiple complaints last month to Rhode Island police about hearing voices in his hotel room walls.

Naval officials were made aware of that troubling behavior but did not react before Alexis carried a shotgun into the Navy Yard base and began his attack. He was killed in a shootout with police just a few minutes after the rampage began.

Hagel said the Rhode Island report -- and other now-public information about Alexis’ past mental health treatment and arrests for violent behavior -- indicates problems in the department’s vetting process.

Deputy Defense Secretary Ash Carter will head up a pair of reviews in coming weeks: the first to study physical security measures at all military bases, the second to look at how security clearances are investigated.

The department will also set up an independent panel to review force security issues, with a report due to Hagel in coming weeks.

Hagel would not comment on specifics of the ongoing shooting investigation, but noted that “obviously, something went wrong.” He said Navy and Pentagon officials are working closely with FBI investigators to piece together the timeline of the attack, including the weeks leading up to the crime.

On Capitol Hill on Wednesday, Chief of Naval Operations Adm. Jonathan Greenert told lawmakers that he has also ordered a review of security procedures and access control at all facilities, to be completed in two weeks.

He also insisted that budget cuts facing the military played no part in Monday’s tragedy. “We don’t cut security corners for sequestration.”

The shooting comes less than four years after an Army psychiatrist killed 13 people and wounded 32 others at Fort Hood, Texas, a tragedy that sparked similar reviews to military security and personnel procedures.

“The clearance piece is one we very clearly have to take another look at,” he said.

Hagel did not say whether the review would disrupt current security checks for prospective defense employees, but he did express concerns about the lengthy wait for updating certain background checks. In some cases, security clearances can remain valid for up to 10 years.

“The longer clearances go without any review, there’s a jeopardy to that,” he said.

Dempsey said that better background checks might not have been able to pick up problems with Alexis, who was confronted by police but not charged with any crime.

Hagel deflected questions about taking a larger role in national gun control policy discussions, but did acknowledge that the problem of mass shootings extends beyond military bases.

“We would hope we can find answers on how we can do this better,” Hagel said. “We don’t live in a risk-free society. But that’s not good enough.”

Defense employees “deserve the security of a safe environment.”