Hagel assures troops in Afghanistan they are not forgotten 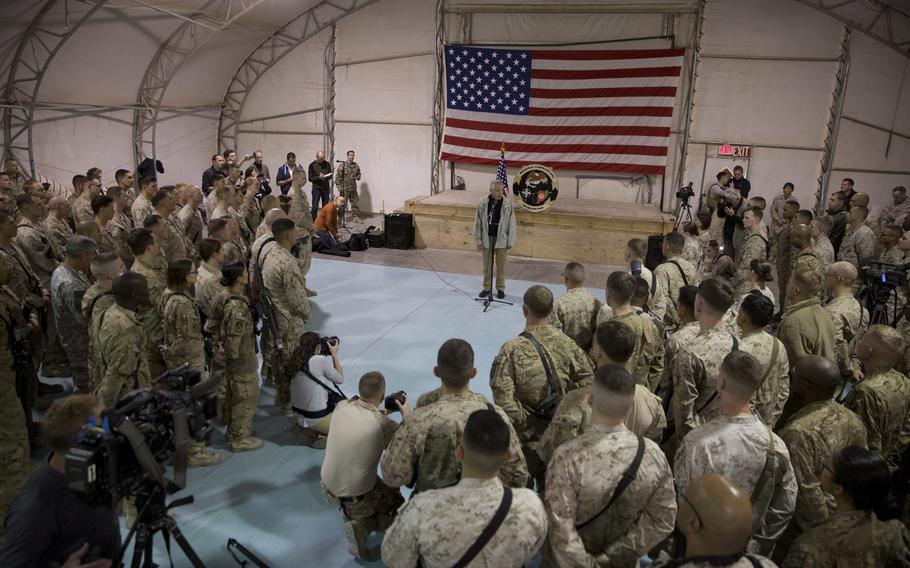 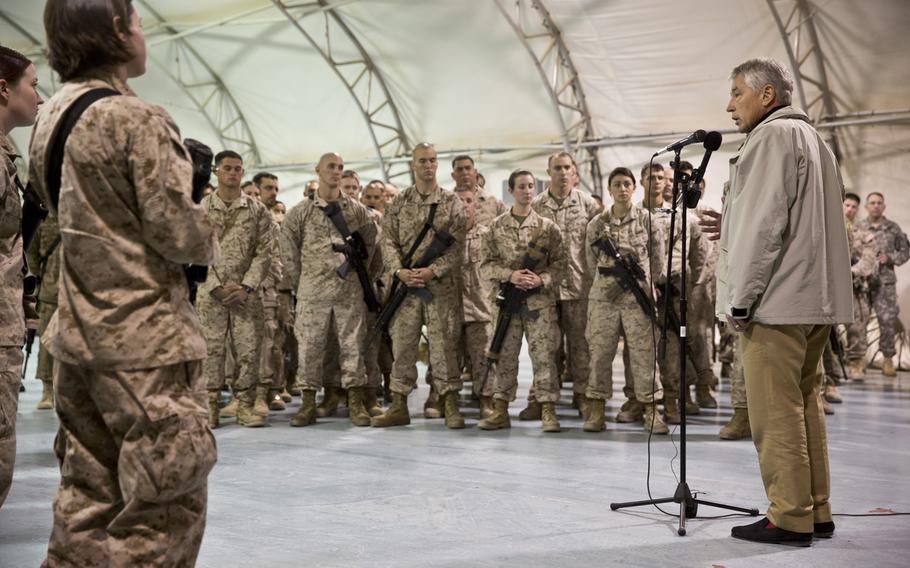 Marine Sgt. Major Paul Berry advised the roughly 175 servicemembers — mostly Marines, with some soldiers, airmen and sailors mixed in — to loosen up. Hagel, a Vietnam-era combat veteran, would be energized meeting with U.S. troops in the war zone, he said.

“It’s okay to smile and OK to laugh — he expects you to do that,” Berry said. “This is therapeutic for this guy.”

Hagel says his current stop in Afghanistan — part of a broader tour of five countries in the Middle East and Southwest Asia — is primarily about making sure that U.S. servicemembers know that the country hasn’t forgotten about their sacrifices as the 12-year-old war winds down.

“I know more than occasionally you wonder if anybody’s paying attention, or if anybody cares, but we do,” he told the troops at Leatherneck. “Our country cares, we do know what you’re doing and we appreciate it very much.”

One agenda item Hagel very publicly skipped during his second visit to Afghanistan as secretary of defense was a meeting with Afghan President Hamid Karzai.

Karzai is in the midst of his latest dispute with the United States over his refusal to sign a bilateral security agreement that provides legal immunity from Afghan courts to U.S. troops after 2014 and lays out the guidelines for an ongoing training and counterterrorism mission.

In response to a question from a servicemember at Camp Leatherneck, Hagel noted that a council of thousands of Afghan elders and local leaders endorsed the security agreement and recommended Karzai sign it quickly.

But Hagel stopped short of calling for Karzai to sign the agreement. After Hagel’s arrival in Kabul late Saturday, he acknowledged that there was no point in continued pressure on Karzai, who has already brushed off demands to sign the security agreement by a wide range of U.S. and international officials.

He acknowledged the tussles with Karzai - which frequently focus on the Afghan president’s attempts to limit the coalition’s tactical options — can affect the lives of troops.

“I know that is something that doesn’t escape you, and occasionally makes your job harder,” he said. “But I want to reassure you we will work through this, and the sacrifices and the work you are doing are not going to be undone, and you are making huge investments in the future of this country.”

Marine Sgt. Jacob Tatge asked Hagel about the likelihood that automatic budget cuts of $500 billion over 10 years could hurt troops.

“What impact is that going to have on the services?” Tatge asked. “What areas are we going to see cutbacks — whether equipment, training, quality of life or some other areas?”

Hagel said there is growing talk in Washington that when the House and Senate come back in session this week, a budget deal might be on the agenda. It wouldn’t solve all the military’s fiscal problems, but it might lessen sequestration and provide a firm basis for budget planning for the next two years, he said.

He said that taking care of troops and their families was always at the top of the U.S. military agenda.

“We still have the resources and the capabilities, and we are going to assure that readiness is always first and that our troops always have everything you need,” he said.

Pakistan visit Defense officials announced late Sunday that Hagel would make a previously unannounced trip to Pakistan on Sunday, the first by a defense secretary in nearly four years.

The U.S. relationship with Pakistan represents one of America's most complicated alliances. Among the issues is growing anger over U.S. drone strikes against alleged terrorists in Pakistan - a controversy that resulted in a decision on the Afghan side of the border to temporarily close a key entry point to Pakistan last week to protect safety of driver’s transporting coalition materiel. As well, the United States and Afghanistan are both seeking to persuade Pakistan to crack down on insurgents who strike at Afghanistan from safe havens in Pakistan.

“Secretary Hagel met with Prime Minister Sharif on his visit to Washington earlier this year and looks forward to continuing candid and productive conversations about our important security partnership and how to address common threats,” assistant Pentagon press secretary Carl Woog said in an email Sunday. “Coming on the heels of his trip to Kabul, Secretary Hagel also looks forward to discussing with Prime Minister Sharif and other senior Pakistani officials the United States and Pakistan’s common interest in a stable Afghanistan.”