Sen. Lindsey Graham, R-S.C., at a hearing in February, 2016. (Joe Gromelski/Stars and Stripes)

Sen. Lindsey Graham, R-S.C., at a hearing in February, 2016. (Joe Gromelski/Stars and Stripes) 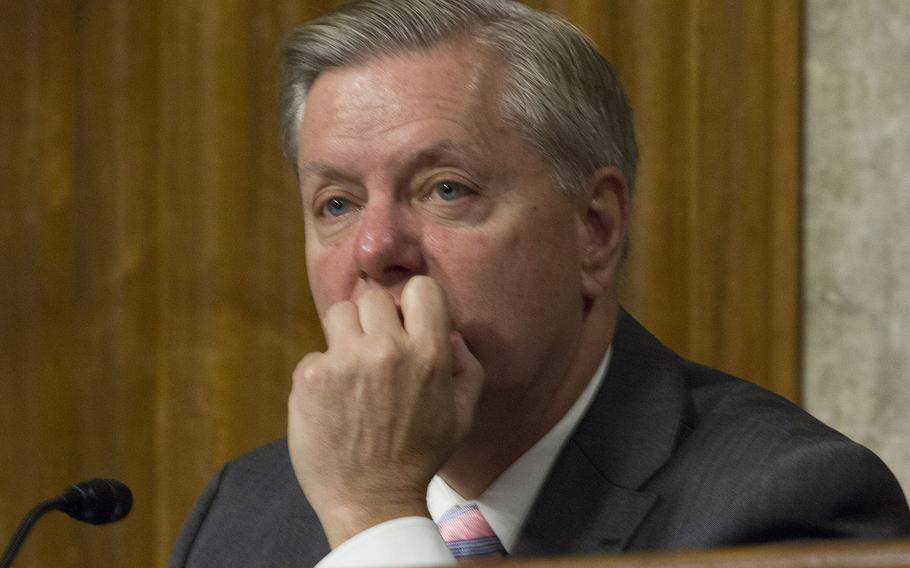 Sen. Lindsey Graham, R-S.C., chairman of the Senate armed services subcommittee on military personnel, signaled Tuesday he will support a plan to allow drilling reserve and Guard members to have access to the menu of health insurance plans offered to federal civilian employees.

“We’re actually thinking about taking the Guard and Reserve and basically putting [them] into the federal employees health system, right,” Graham asked Scott Bousum, legislative director of The Enlisted Association of the National Guard, who acknowledged the plan.

“To me that’s pretty exciting,” Graham said. “I mean Guard and reservists, generally speaking, are not [residing] next to military treatment facilities. And it basically would give you the same access to providers as members of Congress and our staffs have.”

But opening FEHBP would address a common complaint of reserve and Guard personnel that continuity of care for their families often is interrupted when they are called to active duty. That’s because they either lose their employer-paid health insurance or they face significantly higher health costs by electing to continue coverage and paying the employer’s share too.

About 24,000 reserve and Guard members are satisfied with more limited Tricare Reserve Select coverage despite its own continuity-of-care issues. To Bousum’s suggestion that TRS be included among FEHBP options for reserve component personnel, Graham said, “Perfect.”

Graham’s backing of FEHBP access appears to align with the goal, if not the details, of a proposal from the Reserve Officers Association to create a new Tricare Reserve Choice program. That plan would allow reserve and Guard members to choose their own health care providers, paying premiums equal to 25 percent of plan costs, a cost-share formula similar to FEHBP.

The full Armed Services Committee, followed by majorities of the Senate and the House, would need to rally behind one of these ideas before reserve component personnel would see health care coverage improve.

Tuesday’s hearing, which began with testimony from personnel chiefs of the Army, Navy, Air Force and Marine Corps and then advocates for military families, focused on proposed Tricare “reforms” and higher fees; a shift to more business-like commissary operations and product pricing, and needed changes to the “blended” retirement plan due for launch in 2018.

Senators also returned again and again to the need for colleagues to end budget-driven cuts to U.S. ground forces, by acknowledging worldwide threats that have arisen since passage of the Budget Control Act of 2011.

Graham opened the hearing promising to oppose the administration’s call for a 1.6 percent military pay cap next January, a fourth consecutive raise that would fail to keep pace with private-sector wages growth.

On Tricare, the personnel chiefs endorsed the Defense Department’s push to care for as many patients as possible in military treatment facilities versus sending them into Tricare civilian provider networks. The aim is to hold down costs while enhancing medical staff proficiency and readiness.

If health care can become more efficient, then more budget dollars would be available to train and equip the force, said Lt. Gen. James C. McConville, Army deputy chief of staff for personnel.

“There is not enough money to go around so we need to look every place and Tricare is one,” McConville said.

“We surveyed more than 6,100 military spouses in December and January,” Raezer said. “Nearly 30 percent of those who use military treatment facilities reported they rarely or never get an acute-care appointment within the 24-hour access standard.”

Tricare reforms proposed in the fiscal 2017 defense budget call for higher fees and co-pays, particularly on working-age retirees and their families, but are short on details for improving benefits delivery, Raezer said.

The new retirement plan, which a majority of the current force will be invited to join, will offer a Thrift Savings Plan with government matching of contributions. But it would pare the immediate annuity payable after 20 years or more years of service by 20 percent compared to current benefits.

McConville said he already is concerned that career soldiers won’t contribute enough to TSP, or begin contributions early enough, to ensure that their TSP accounts make up for a 20 percent cut in lifetime retired pay.

The blended plan’s “great value” is that 85 percent of members “will get some type of retirement” on leaving service, McConville said. “But a lot of our young soldiers live paycheck to paycheck. And if they can’t start saving early, they’re going to have a tough time … when they get to 20, 25 years.”

The other personnel chiefs focused criticism of blended retirement on the continuation payment to be offered after 12 years’ service to members who agree to serve another four years. The size and timing of the payment must be made more flexible to properly shape mid-career forces, they said.

“It was an intentional choice by this committee to set eligibility [for TSP matching] to two years and one day of service,” Graham said, so that thousands more members would leave service with some retirement benefit. Graham said he won’t allow that to be reversed.