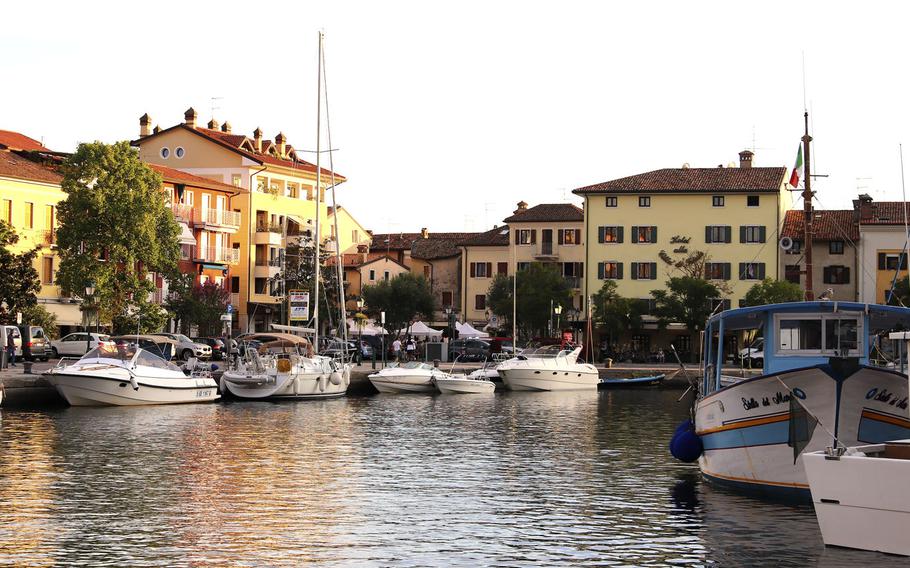 Buy Photo
The center of Grado, Italy, looks out over a peaceful marina. An island in the lagoon between Venice and Trieste, Grado’s mix of Venetian flair and elegance, family-friendly beaches and numerous eateries and gelaterias -- plus the fact that it’s a pleasant 90-minute drive from Aviano -- make it a must-visit for anyone in northern Italy. (Norman Llamas/Stars and Stripes)

Buy Photo
The center of Grado, Italy, looks out over a peaceful marina. An island in the lagoon between Venice and Trieste, Grado’s mix of Venetian flair and elegance, family-friendly beaches and numerous eateries and gelaterias -- plus the fact that it’s a pleasant 90-minute drive from Aviano -- make it a must-visit for anyone in northern Italy. (Norman Llamas/Stars and Stripes) 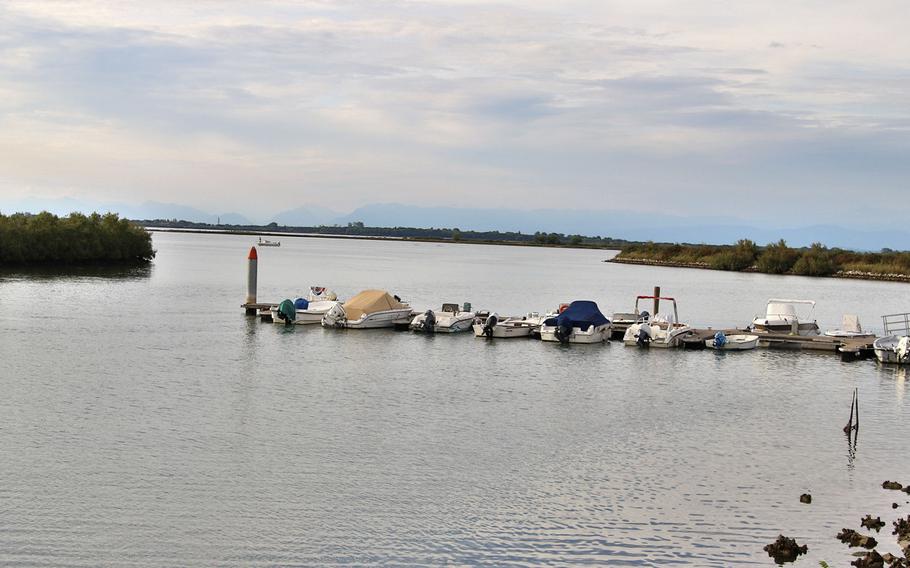 Buy Photo
A view of a tranquil back bay in Grado, Italy. Grado is known as the island of the sun or the golden island because its beaches all face south and are never in the shade. (Norman Llamas/Stars and Stripes) 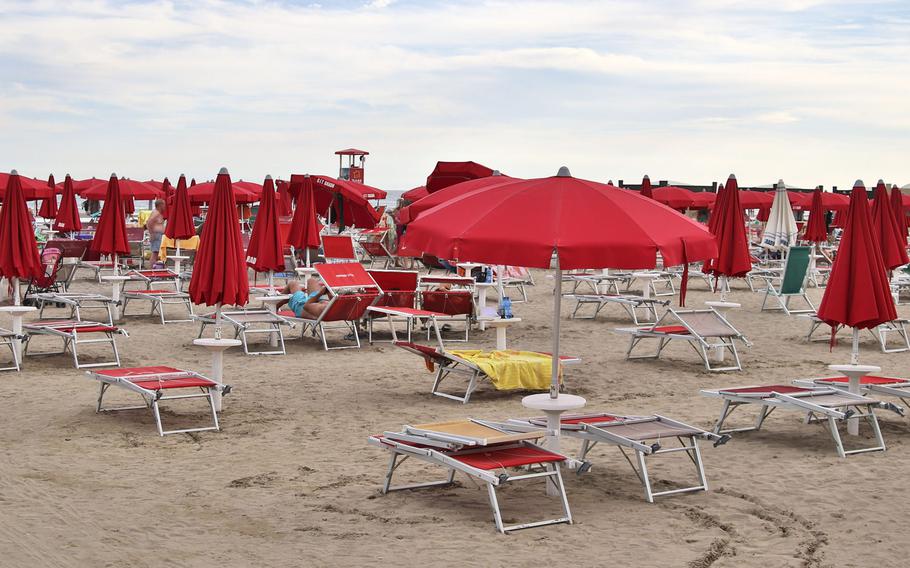 Buy Photo
Many of the beaches in Grado, Italy, allow you to rent umbrellas and a beach chair or two. The typical cost for an umbrella with two chairs is between 14 and 18 euros. (Norman Llamas/Stars and Stripes) 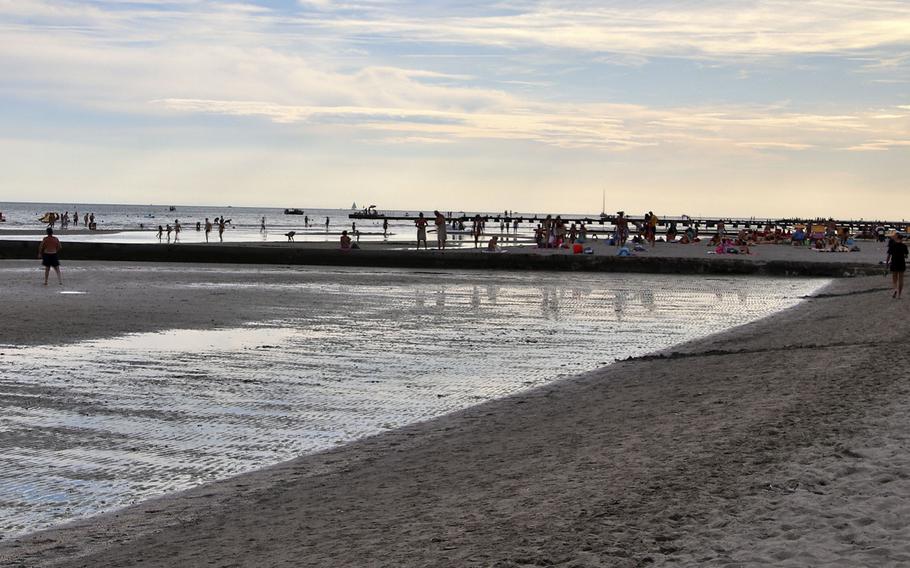 Buy Photo
The main beach in Grado, Italy. Grado, which is between Venice and Trieste, is known as the island of the sun or the golden island. (Norman Llamas/Stars and Stripes) 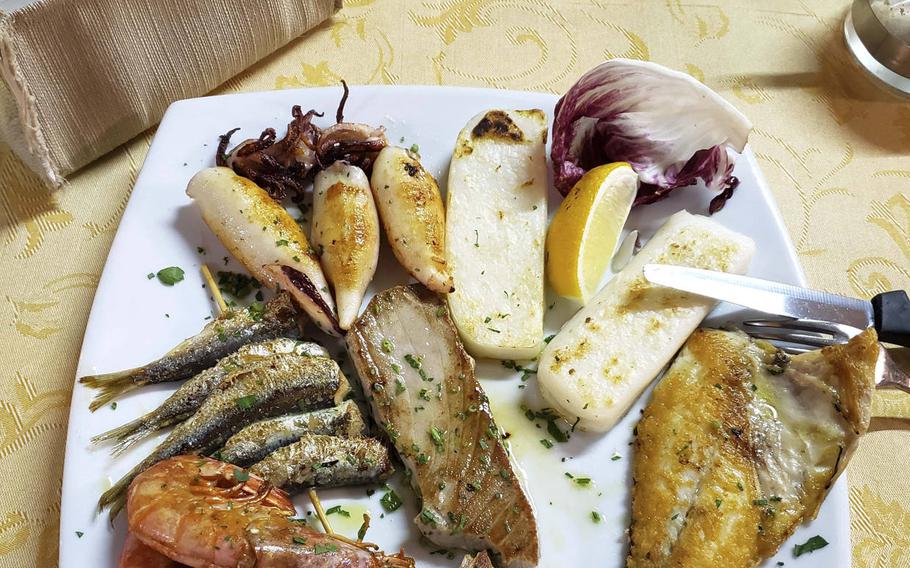 Buy Photo
A seafood platter from a local restaurant in Grado, Italy. Most restaurant menus in the island town are dominated by seafood dishes, but they also offer items for people who can't or don't want to eat seafood. (Norman Llamas/Stars and Stripes) 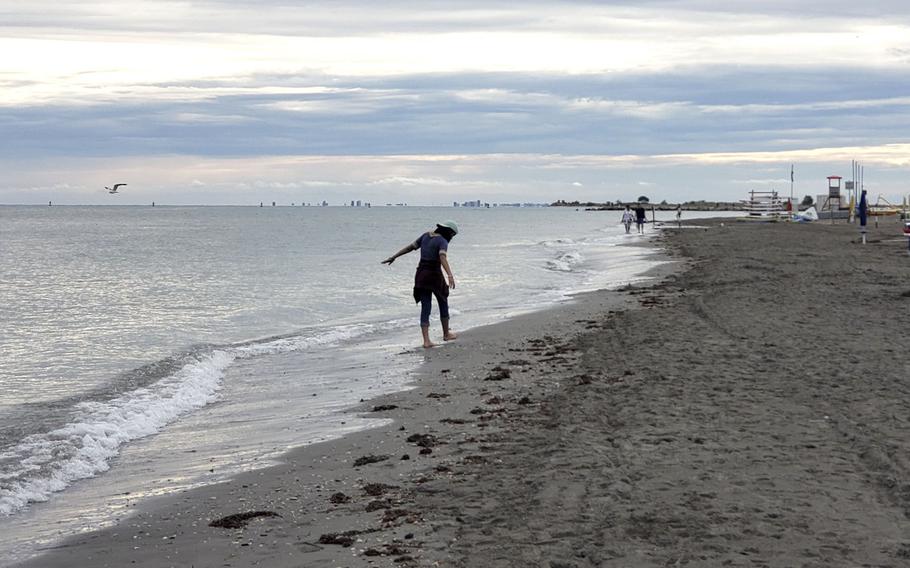 Buy Photo
A beach in Grado, Italy, during the off-season. If you visit the island, just a 90-minute drive from Aviano, in the spring or fall, you're likely to have the beach to yourself. (Norman Llamas/Stars and Stripes)

With Venice, the Alps and a multitude of beach towns all roughly the same distance from Aviano, the most challenging thing about living in northern Italy is sometimes picking where to go when you have some spare time.

My family has narrowed it down: we have a weakness for beach towns and, when we think of the best beaches in the area, one of the places we all agree on is Grado.

An island in the lagoon between Venice and Trieste, Grado has a unique yet familiar Venetian charm. It’s no wonder that the locals call it “little Venice.”

Its beaches are all very clean and, because they all face south, are never in the shade. The lagoon is beautiful. The sun always seems to shine — at least when we’ve visited.

Even the 90-minute drive to Grado makes a trip to the island worthwhile. You’ll pass through beautiful villages, some dating back to the early days of the Roman Empire, until you reach a long causeway that crosses the lagoon from the mainland.

My family and I tend to spend most of our time in Grado on the beach. My wife and daughter spend hours in the water. My son and I love the pristine white sand and spaciousness of the beaches.

After a day of sea and sun, we often go for a stroll around town. Sometimes we’ll stop off to visit the Basilica di Santa Eufemia and the Basilica di Santa Maria delle Grazie, Grado’s oldest church, in the Campo dei Patriarchi, in the center of Grado. Also in the middle of town is the Sea Spa, or Terme Marine, which used to be a favorite destination for aristocrats during the 19th century and is still known as a place to go to rejuvenate mind and body, according to the Friuli Venezia Giulia website. We’ve never been because we spend too much time enjoying the beach.

If we’ve worked up an appetite, we like to grab a meal at a local restaurant. Most offer fresh seafood, but also have options for those who can’t, or don’t want to, eat seafood.

After dinner, we often set out on a quest for ice cream, or gelato as it’s called locally. Grado doesn’t disappoint in this department either — there seems to be a great gelato bar around every corner.

And if you’re in northern Italy in the summer, each year on the first Sunday in July, Grado hosts the Perdon di Barbana festival, in which a procession of boats decorated with flowers and flags sails to the Marian sanctuary on the island of Barbana, which you can see when you cross the causeway. The ritual, which dates back 800 years, is another reason that Grado is one of our favorite beach towns. It should be high on your list of places to visit in Italy.

City parking lots are open from 8 a.m.-8 p.m. and cost 50 cents per hour, which you usually pay at a meter. There are also parking areas along the roadways by the beaches, but make sure you park in a blue-lined area (indicating paid parking spaces) and pay at the meter. Don’t park in an area marked by yellow lines. It’s for residents only, and you’ll get a ticket.

TIMES: Lifeguards clock out at 8 p.m.

COSTS: Most beaches have paid-for umbrella stations. The typical cost for one umbrella spot with two chairs is between 14 and 18 euros. You could also opt for a bungalow, which is a covered area that comes with four or more chairs and a table. That costs between 50 and 80 euros, depending on how big a bungalow you choose. Many of Grado’s beaches post their prices online, but you can also find them at the entrance to the beach.

FOOD: There are stands at all the beaches offering fast-food items such as burgers, sausages, chips, candy and ice cream. Many also serve alcoholic beverages. Prices vary. Food in town is mainly seafood, but you will find non-seafood items on the menu. Some restaurants are pricey. If there aren’t any prices listed on the menu and you care what you spend, ask your server how much a dish is before you order.