‘God has been good to me all the way around’ 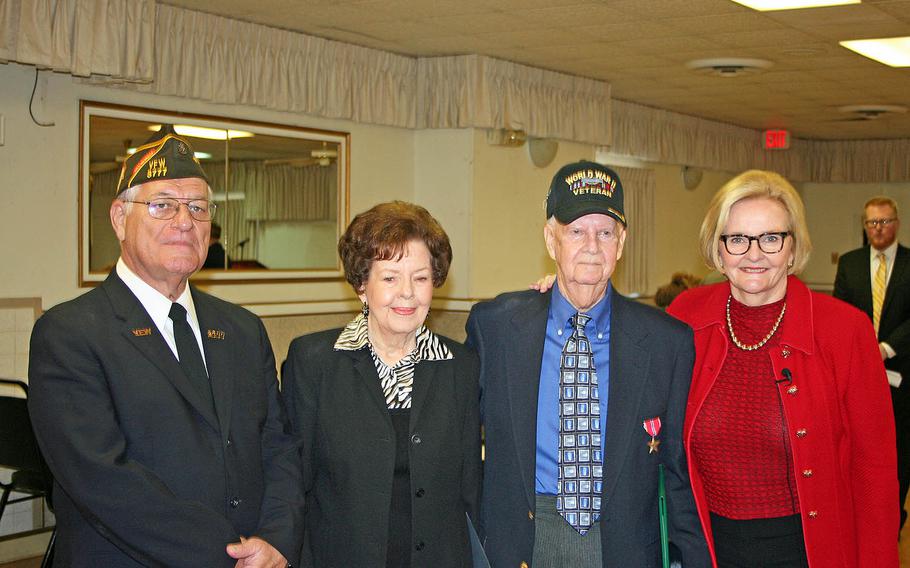 World War II veteran Carl Willm was belatedly awarded a Bronze Star for his military service. Missouri Sen. Claire McCaskill, right, attended the ceremony Jan. 29. Willm earned the award for his efforts in February 1945 on night patrol in the Philippines, but his commander was killed in action before he could file the paperwork. Willm's wife, Peggy, is on the left. (Courtesy of Senator Claire McCaskill)

February 1945, The Philippines When 19-year-old Carl Willm’s Army platoon leader asked whether he could swim, the young private's “yes” sent him on a perilous patrol deep into enemy territory.

It was February 1945, and Willm’s unit has just retaken a section of the Philippines with thousands of U.S. troops positioned at Subic Bay. After setbacks in the Pacific, the U.S. military was on the march, aiming to get after Japanese forces in the fight to recapture the Bataan Peninsula.

On Feb. 8, a week before Willm’s unit would launch an assault on the island of Corregidor, the private, his platoon leader and two other troops paddled from Subic Bay toward Bataan on an intelligence-gathering operation. The nighttime patrol by canoe brought the soldiers near the coastline of Bataan, where they estimated thousands of Japanese troops were in place.

“We could see lots and lots of preparation. We could see a lot of activity,” recalled Willm, of Festus, Mo. “You don’t think about it at the time, but if they saw any sign of us it would have been a quick death.”

The 16-mile mission by canoe ended with the soldiers back at Subic Bay by dawn, armed with intelligence for their commanders.

“When we got back after patrolling all night, my lieutenant said, ‘I will put you in for the Bronze Star,’ ” Willm recalled.

In subsequent days, combat would make that impossible. Soon after the patrol, Willm’s commander was killed in action, and for 70 years Willm kept his commander’s Bronze Star pledge pretty much to himself.

In late 2015, Willm’s son-in-law found some letters Willm wrote for his grandchildren, describing his war experiences and making mention of the missing Bronze Star. That started an effort to get Willm recognition at last for his courageous service during World War II.

In January, Willm received his belated Bronze Star during a ceremony at his local VFW in Missouri attended by military brass and home state U.S. Sen. Claire McCaskill, whose office played a key role in getting the medal issued to Willm.

“We owe a debt of gratitude to our troops for their service,” McCaskill said at the time. “It’s especially important to me to not forget the tributes they’re due as well — and so this is one of my favorite parts of my job, helping to secure much-deserved recognition for veterans like Carl Willm.”

Willm said that he was grateful for the recognition and that his grandchildren were able to see it happen.

“God has been good to me all the way around,” he said.

Willm entered the Army in 1944 after graduating high school, deploying to the Pacific where he served with Company L, 3rd Battalion, 34th Infantry Regiment, 24th Infantry Division. Willm fought in the liberation of the Philippines. After combat on Leyte and Luzon, Willm’s unit took part in landing operations to retake Corregidor from Japanese forces.

In May 1946, he was honorably discharged and returned home to Missouri.

“As long as I live I will remember the day I caught a bus and came home and no one knew I was coming,” he said. “And I walk in the gate there, my mother in the yard, and she said, ‘Oh here he comes.’ And we both cried.”

Willm said he thinks back often on his two years of service in a foreign land where the violence was extreme and the casualties were many.

“At my age now it’s hard for me to talk about,” he said. “I get too emotional, and it’s pretty easy for me to cry.”