Go ahead, shoot a Sherman on Texas ranch that's home to military hardware 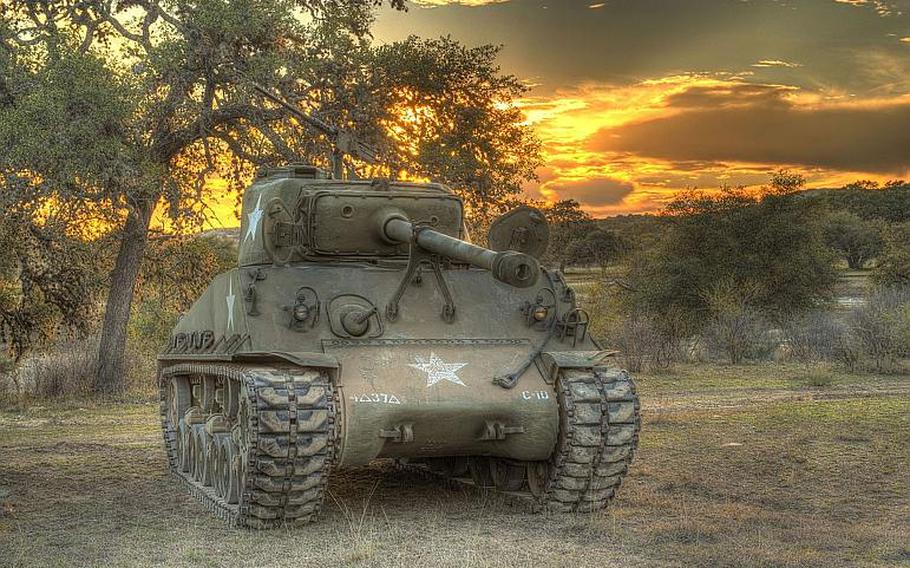 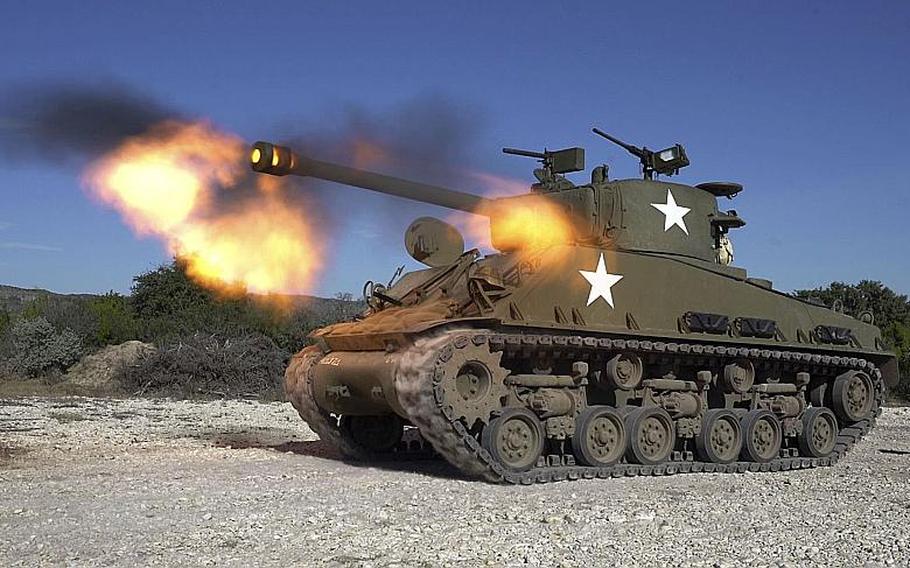 UVALDE, Texas — There is only one place in the world where you can fire a Sherman tank, more than 70 years after it rolled off the production line: deep in the heart of Texas.

The M-4 Sherman, the workhorse medium tank used throughout World War II and into the Korean War, is instantly recognizable from museums, archival footage and the film “Fury” starring Brad Pitt.

Few of the 50,000 tanks have survived the ravages of battle and time, and fewer still are operational.

But the 76 mm cannon on a late-model M4A2E8 Sherman still belches fire at the Ox Ranch in the Texas Hill Country, where DriveTanks.com has carved out space for customers ranging from 10-year-olds to billionaires to climb on, drive and shoot some of the rarest military hardware on the planet.

While similar businesses might allow customers to drive tanks a short distance and shoot without projectiles, DriveTanks.com CEO Todd DeGidio said what makes his company truly unique is the dedication to authenticity with full-power rounds fired on a 40-acre driving course and range tucked away on a sprawling ranch — a sandbox for nearly a dozen tracked vehicles, not far from where giraffes and zebras roam.

“Anyone can shoot a tank without a round. But not anyone can fire a full-power load that someone would have shot in the 1940s,” DeGidio said. “You’re not going to roll up in Houston or anywhere else to shoot a Sherman.”

The company has secured licensing from the Bureau of Alcohol, Tobacco and Firearms to manufacture rounds and recommission tanks, said John Lindsey, the vice president of operations at Paradigm SRP, the parent company of DriveTanks.com. Tanks are sold with the breech ring cut in half with a blowtorch, he said, making the gun unable to fire. The mechanism, which closes off the explosion after loading a round into the cannon, is restored with ATF permission, Lindsey said.

A business model emerges DeGidio, a former Army Special Forces demolition and engineer sergeant in the mid-1980s, said he collected military memorabilia and acquired the Sherman as an investment with his son-in-law, Brent Oxley, the owner of the 18,000-acre Ox Ranch about two hours west of San Antonio, where guests can hunt more than 40 species, from deer to buffalo, as well as fish and view animals in a safari-like setting safely out of view of weapons on the DriveTanks.com range.

Visitors at the exotic hunting grounds were drawn to the tank in the advertisements, and a business model emerged to get customers in the driver’s seat, he said. DeGidio opened the vehicles to paying customers last summer.

The business also offers guests a chance to drive and shoot a Soviet T-34 medium tank that saw action on the drive to capture Berlin. DeGidio believes it is the only firing T-34 in North America.

Other historical options to drive include a German tracked motorcycle captured in Belgium in 1944 after sustaining battle damage and a post-war Czech personnel carrier restored to look and operate like a SdKfz 251, a World War II-era German half-track.

The facility also offers modern tanks, like the 1970s German Leopard 1A4, the “sports car” of the group that cruises up to 40 mph and glides over ditches and across the shallow river junction that doubles as part of the driving course.

Guests also have to option to crush cars with a 50-ton British Chieftain Mk. 6.

While DeGidio said he doesn’t want his business to draw only the wealthy, the more hands-on packages cost thousands of dollars due to the maintenance demands of decades-old military vehicles. The most expensive option, the Allies and Axis package with the Sherman, T-34 and a suite of World War II weaponry, is $8,250.

Driving the Sherman for about a mile on a rough terrain course and shooting one live round will set you back $2,800, with the T-34 costing $100 less. Grinding a car into the dirt underneath the Chieftain costs $999 and shooting the German 7.5 cm Pak40 anti-tank gun -- the only functional one left on the planet, DeGidio said -- costs $950.

The cheapest driving option is the German half-track at $450, and it’s free to climb on and sit in the Sherman and other vehicles.

“We’ve had everyone from top 1 percenters to single moms bringing out their son for birthday party,” he said. There are no age restrictions. Kids as young as 8 have shot the cannons and 12-year olds have driven them, according to the website.

Customers have included an NFL team owner and a Chinese businessman who brought a translator to relay driving instructions, DeGidio said. Asian countries have supplied steady customers, he said, with others coming in from Russia, Israel, Australia, Italy and all across the United States.

Teaching history and courting veterans There is an unmistakable historical fingerprint throughout the main housing unit for the vehicles, dubbed the Tank Barn, which doubles as a military museum.

World War II-themed items hang on the walls of the Patton Lounge above the vehicles, where guests can rest and watch war documentaries while sipping Shiner Bock craft beer brewed in Texas. The roof is outfitted with a parachute canopy from a pilot who bailed from a flaming B-17, with original maps and dog tags to examine as Frank Sinatra and era-appropriate music plays in the background.

The lounge holds a single item belonging to Gen. George Patton: a sword he designed in 1913 to thrust through enemy troops while on horseback, different from the curved sabers that he reportedly complained could get stuck in the body of an enemy and be lost in battle.

The motif is a deliberate way to teach historical events and lend insight into the experience of troops and veterans, DeGidio said.

“In museums you can only read charts and stand behind ropes. You don’t get the hands-on feel,” he said. “You get the sounds and smells and breathe in the exhaust fumes” with the tanks. “It’s that feeling you won’t ever get from documentaries.”

And then there is the flamethrower, one of the most sought-after weapons that shocks customers with its intense heat and long flame. The weapon was used to clear German and Japanese concrete pillboxes with a stream of ignited napalm during World War II, and later in Korea and Vietnam. DriveTanks.com offers the Vietnam-era M9, and for $300, you can roast a paper target with a weapon banned by the Geneva Convention in use against human targets.

Other infantry weapons include the M1 Garand semiautomatic rifle and M3 “Grease Gun,” a German MP40 submachine gun and the rare StG44, the world’s first assault rifle, along with the feared German MG42 machine gun. There are about 40 machine guns, rifles and submachine guns on the grounds, along with artillery pieces and mortar tubes.

The veterans’ community is a priority target audience for the outfit, said Spencer Tesanovich, vice president of veterans affairs for DriveTanks.com. Five of six staffers are veterans, said Tesanovich, who served in Iraq.

His work getting veterans outdoors landed him a job at DriveTanks.com, where he is spearheading the Back on Track program to bring in wounded veterans at no cost to them. An all-terrain tracked wheelchair in the Tank Barn helps amputees and elderly veterans get around the site.

Customers with military experience will sometimes chime in with details about the vehicles and equipment, he said.

One World War II veteran explained how engineers designed a pistol port in the turret for crew members to shoot from, but it was better suited for discarding cannon shell casings that cluttered the inside of the tank during battle, he said. Now the staff passes that fact along to others.

“It’s not just, ‘Come shoot a gun here and leave,’” Tesanovich said. “This is history.”

‘Fire in the hole!’ Rick Bozeman, an executive in the homebuilding industry in Houston, visited DriveTanks.com on recent weekday afternoon with two coworkers. They were visiting Ox Ranch to hunt, and included a ride-and-shoot on the Sherman as a team-building exercise, he said.

Bozeman strapped into a safety harness as his coworker handled the levers inside the Sherman, lumbering down the trail throwing dust into the trees and coming to rest at the range, where a silver car at 250 yards was zeroed in for target practice.

Each man fired a small belt of .50 caliber machine gun rounds at the car, already shattered by previous visitors.

Tesanovich then prepared the firing of the live cannon projectile that sets DriveTanks.com apart. DeGidio spends about an hour preparing and inspecting each shell to ensure it provides the same power and boom that echoed on battlefields seven decades ago. Tesanovich explained that the force rocks the tank so hard that it’s a hazard to be inside.

A rigged cord, similar to an artillery piece, is used to fire the cannon. Bozeman volunteered to shoot. The ground shook as the projectile sped downrange at 2,800 feet per second.

It appeared to be a direct impact, just above the rear tire.

“I have shot a lot of firearms, but that was pretty amazing,” Bozeman said.

Tesanovich said only about 10 percent of the 14.5-pound shells are found in the berm, but on this day, the shell was plucked straight from the dirt.

“I’ll probably make it a paperweight in the office and tell stories about it,” Bozeman said.

Those personal stories and media coverage have led to an avalanche of bookings. The biggest challenge is sustainability, DeGidio said, as the small crew is challenged by maintenance, repairs and growing demand.

The company is shooting in a week what some other outfits shoot in a year, he said. And the word is spreading about a possibility that not many have considered.

“No one is sitting around the breakfast table thinking, ‘I want to drive a tank today,’” DeGidio said. “But when you hear about it, then it’s something you want to do.”