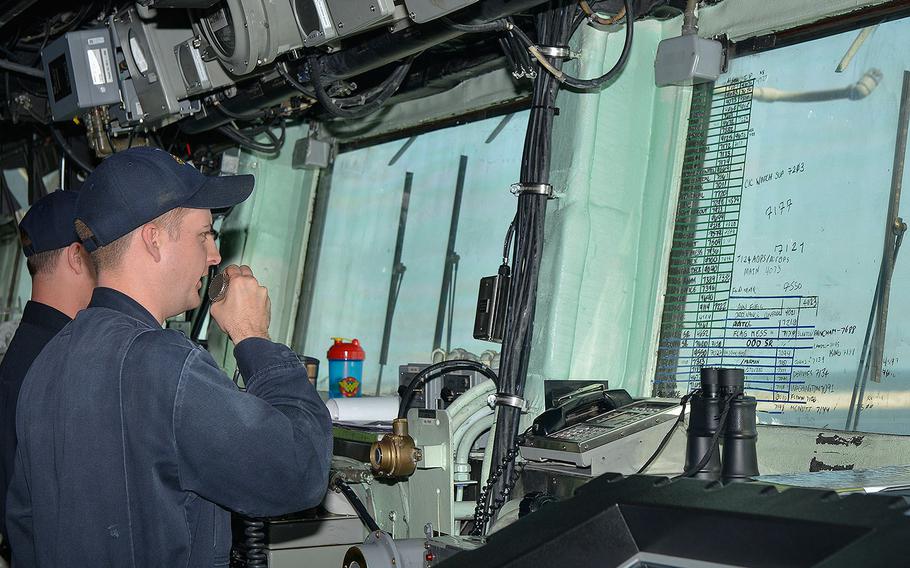 A Junior Officer of the Deck on the bridge of amphibious assault ship USS Iwo Jima (LHD 7) communicates during a sea-and-anchor detail in the Atlantic Ocean on March 5, 2017. (Dary M. Patten/U.S. Navy photo)

A Junior Officer of the Deck on the bridge of amphibious assault ship USS Iwo Jima (LHD 7) communicates during a sea-and-anchor detail in the Atlantic Ocean on March 5, 2017. (Dary M. Patten/U.S. Navy photo) 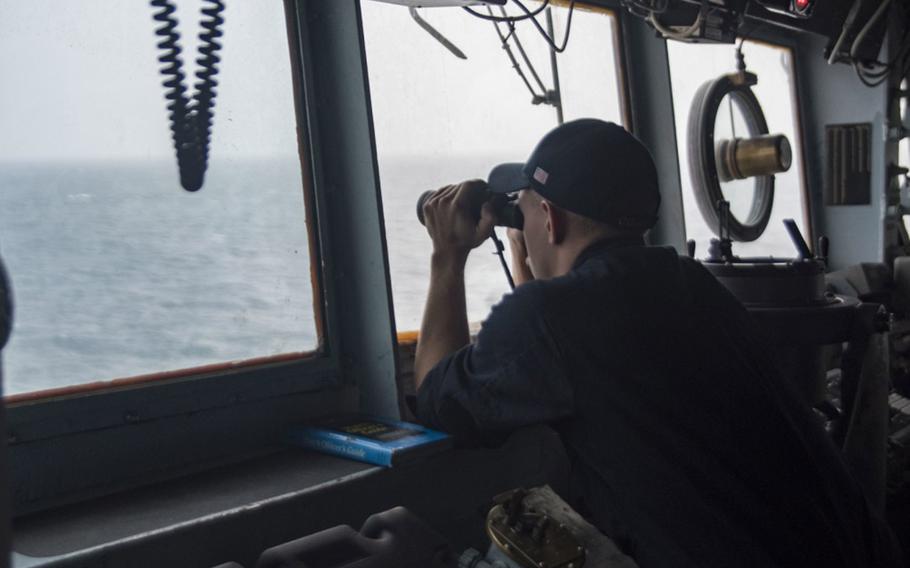 An ensign stands junior officer of the deck during a Strait of Hormuz transit, aboard the guided-missile cruiser USS Monterey. (Trey Fowler/U.S. Navy)

WASHINGTON — Nearly 84 percent of Navy first-tour junior deck officers randomly tested were not competent to drive their ships without raising concerns, particularly when “immediate action” was required “to avoid collision,” according to findings the Navy released Wednesday.

Instead, many of the 164 junior officers who were qualified to be officer of the deck were not able to demonstrate “critical thinking and decision-making skills” when facing dangerous situations, the Navy review of seamanship and ship-handling skills found.

The results of the evaluations, conducted in the wake of two deadly Pacific Fleet ship collisions last year, were “sobering,” said Vice Adm. Richard Brown, the head of Naval Surface Force Pacific, who ordered the review.

Only 27 of the officers performed without raising any concerns. The vast majority – 108 officers – completed with some concerns, while 29 had significant concerns, Brown wrote in a memo addressed to commodores and commanding officers. The Navy shared the memo after Defense News reported on it.

The findings highlighted severe weaknesses in the training of young officers who come onto ships for the first time and are expected to be able to drive the vessel. They also underscored some of the weaknesses that played out last year in the back-to-back collisions involving the USS Fitzgerald and the USS John S. McCain that left 17 sailors dead.

Brown said the results were not surprising. In an interview with Stars and Stripes, he said that many of the junior officers in the competency checks were new to their first ships. The review was ordered to help the Navy identify weaknesses as it creates a new course for junior officers of the deck, to be introduced next year. It will be included in officer of the deck training at two new centers – in San Diego and in Norfolk, Va. – to open in 2020 and 2021 at a cost of $68 million. The centers will also offer hands-on scenario training on deck and in the Combat Information Center, where officers monitor electronic and radar equipment and man weapons.

The findings showed “glaring deficiencies” in knowledge of radar and related equipment, and a shortfall in applying navigation rules in real-life encounters. Most distressing: When officers found themselves in dangerous situations, most were not skilled enough to avoid collision. Even though 91 percent of the officers performed well on the written test, more than half struggled to correctly apply the same rules in real-time scenarios.

Brown noted that the shortfalls in radar operations follow similar proficiency gaps in mishaps in 2012 and after. As a result, training on radar was increased in 2017 and led to tangible improvement, he said. But that wasn’t enough. The Navy plans to increase its budget to add two weeks of Coast Guard certified radar observer and computer-assisted radar data processing systems training. Brown said that simulator scenarios will address “decision paralysis,” which the junior officers demonstrated in the review.

The Navy began implementing training improvements in 2012, he said, recognizing that cutbacks and efficiencies were damaging readiness. After the collisions, the Navy decided to add even more.

“Given the events of 2017, we couldn’t wait to see if the changes we had made are taking effect,” he said.

In describing the findings, Brown said the Navy “must be realistic in confronting the systemic shortfalls that they revealed in core proficiencies across the junior qualified members of the force.”

Brown was part of a closed briefing Wednesday before a subpanel of the House Armed Services Committee that focuses on readiness issues. Navy Secretary Richard Spencer, Chief of Naval Operations Adm. John Richardson and Capt. Scott Robertson also briefed the panel about reforms the Navy has implemented since the collisions.

After the hearing, Rep. Rob Wittman, R-Va., and chair of the subcommittee on sea power and projection forces, said that while the Navy has taken steps to improve its standards of training, certification and watchkeeping, the reforms are still falling short.

“Even with the adopted revisions, surface warfare officers are still only allotted 25 percent of the training time that their submarine and aviation counterparts receive,” he said. “To me, the system ensures our surface warfare community over-promises and under-executes.

“I continue to be concerned that the systematic reforms we are undertaking will not adequately right the ship,” he said.