Get sidetracked along the German Wine Road in Bad Bergzabern 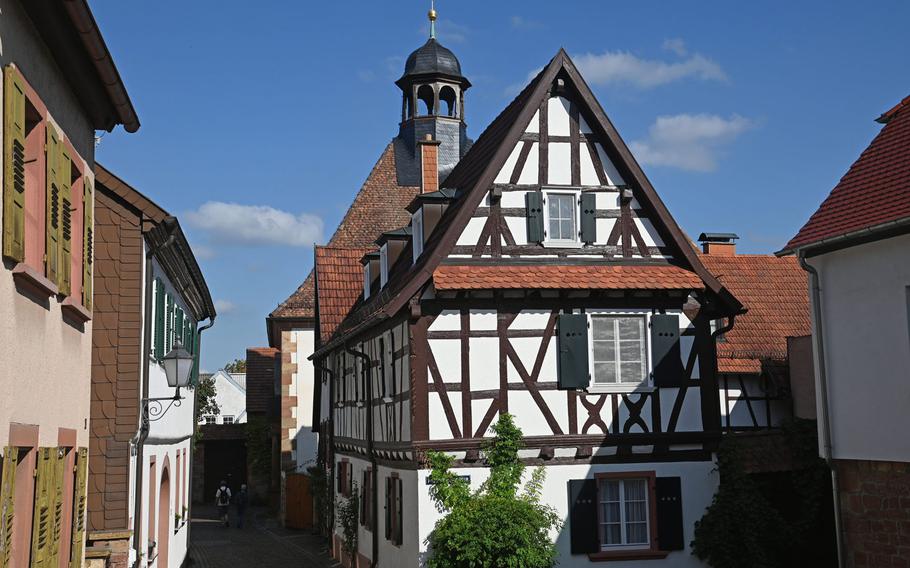 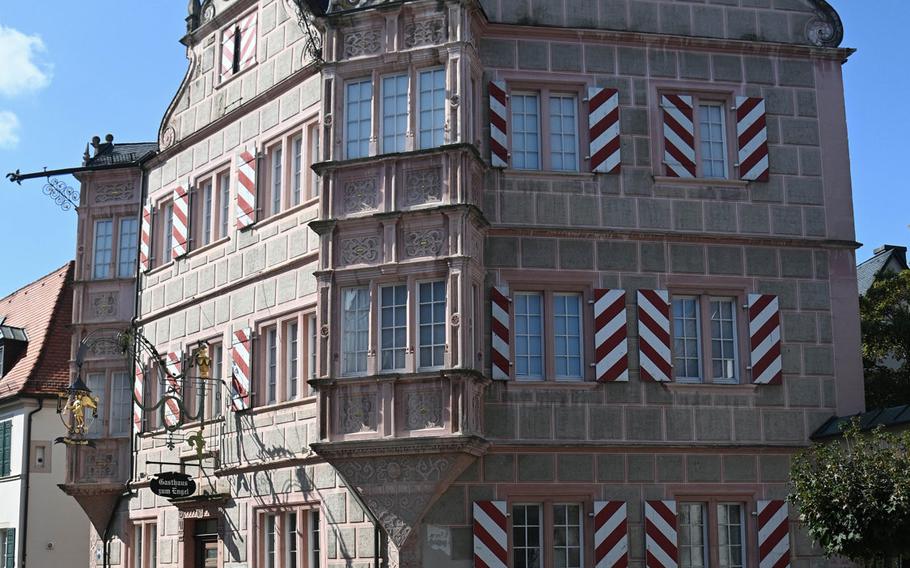 The Gasthaus zum Engel, a Renaissance building in Bad Bergzabern, Germany, built in 1579. It was once used as ducal administrative offices, it now houses the city museum. (MICHAEL ABRAMS/STARS AND STRIPES) 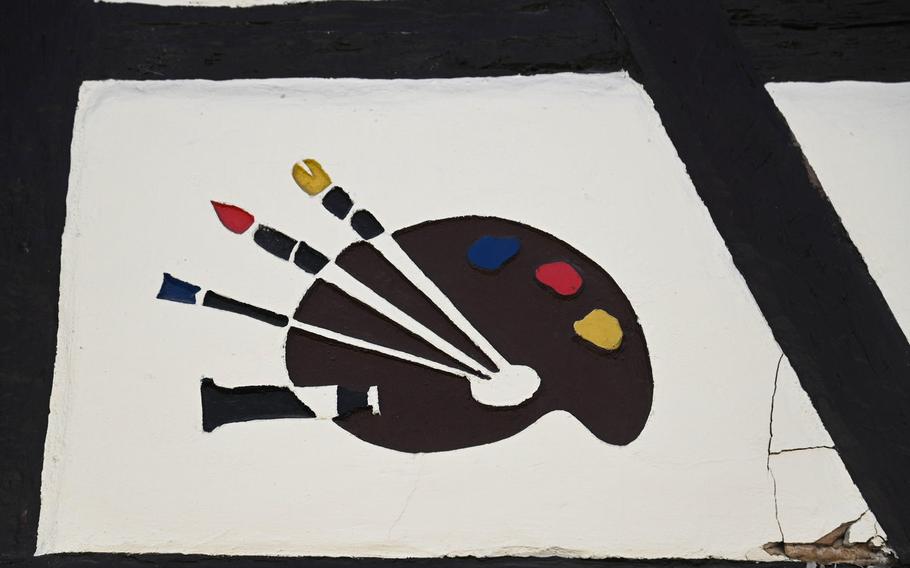 An artist's palette decorates a half-timbered house in Bad Bergzabern, Germany. The town, on the Deutsche Weinstrasse, or German Wine Road, is a nice day trip destination. (MICHAEL ABRAMS/STARS AND STRIPES) 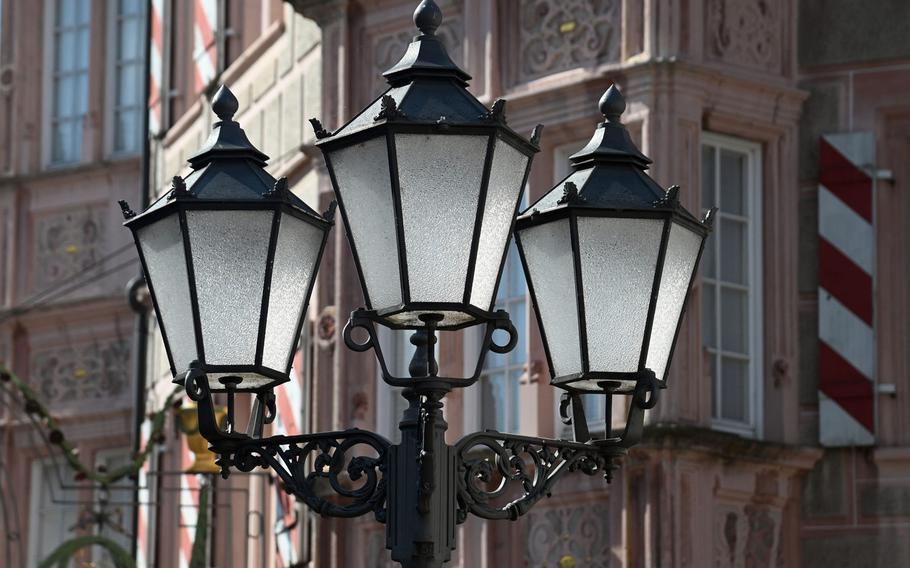 A trio of old-fashioned streetlights stand in front of the Gasthaus zum Engel, a Renaissance building in Bad Bergzabern, Germany. (MICHAEL ABRAMS/STARS AND STRIPES) 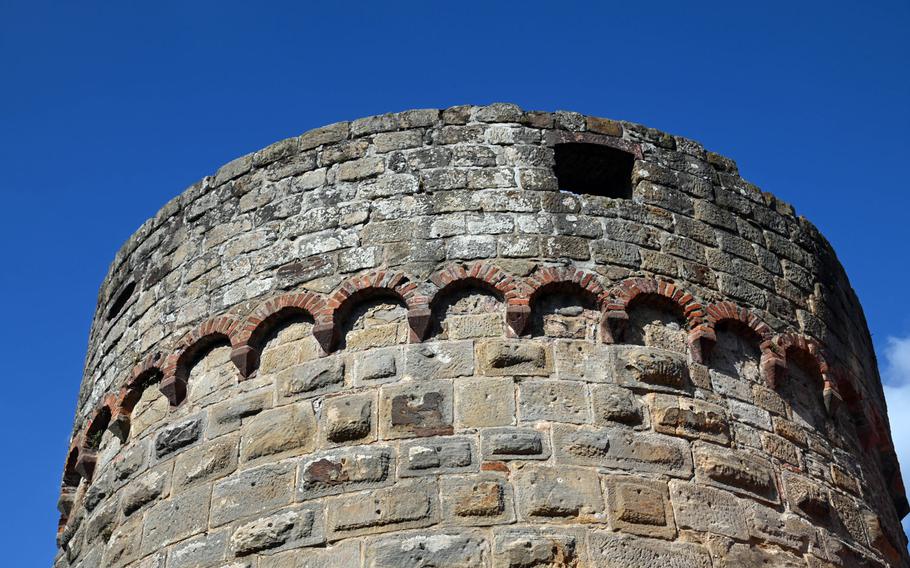 The Dicker Turn, or Fat Tower, in Bad Bergzabern, Germany, was built around 1300 and was part of the town's medieval fortifications. (MICHAEL ABRAMS/STARS AND STRIPES) 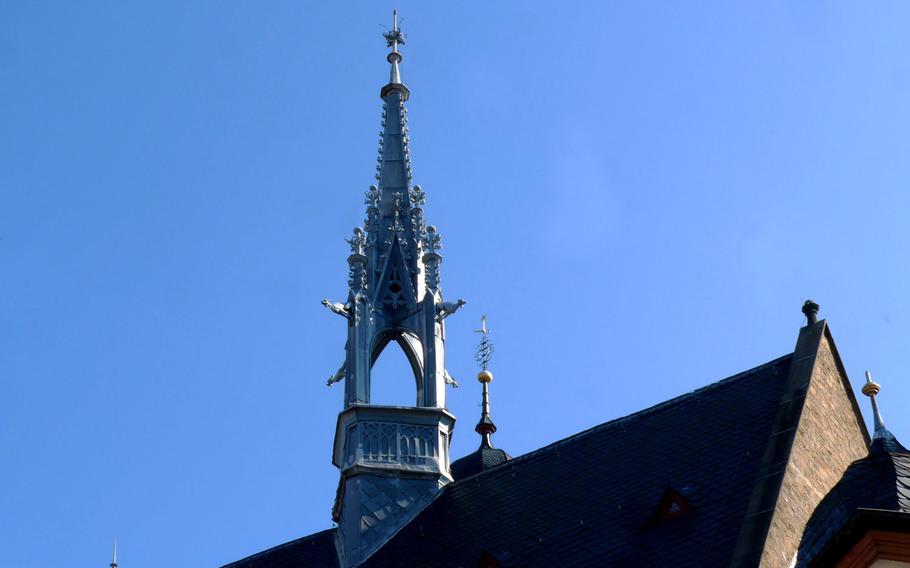 An elegant spire tops the Marktkirche in Bad Bergzabern, Germany. Jut to the right of it, the top of the church's steeple, once a fortification tower, can be seen. (MICHAEL ABRAMS/STARS AND STRIPES) 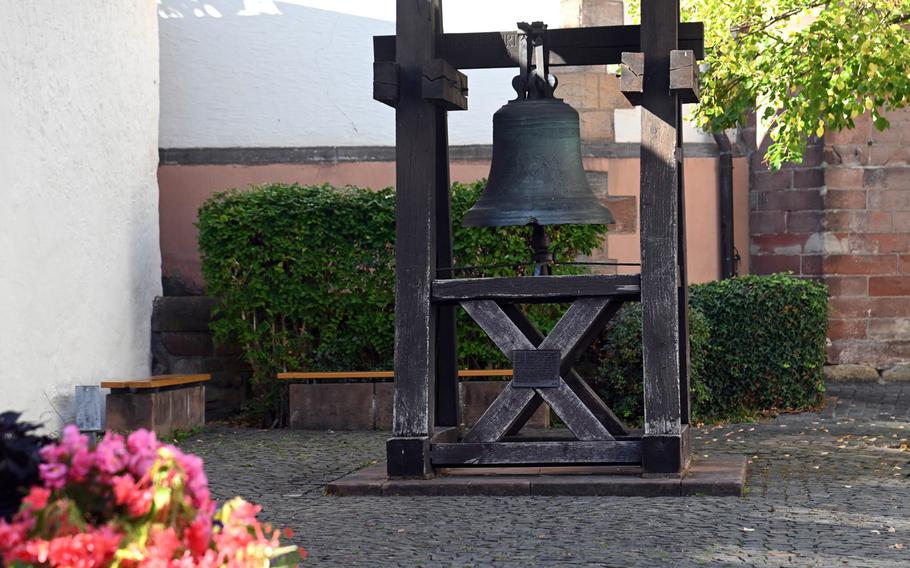 The church bell on Hunspacher Plaetzl in Bad Bergzabern, Germany. It was cast for a church in nearby Landau in 1733. In 1794 it was supposed to be melted down and recast as a cannon, but somehow got stuck in Hunspach in Alsace, where it was used until damaged in World War II. In 1968 it was returned to Bad Bergzabern. (MICHAEL ABRAMS/STARS AND STRIPES) 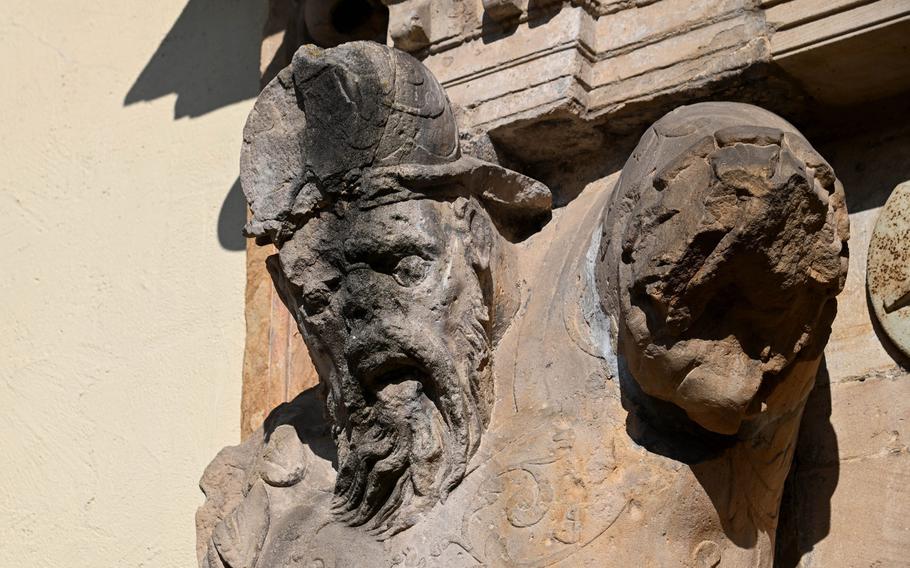 This guy guarding a gate to the Bad Bergzabern palace has seen better days. The palace was built in the 16th century and now houses the city administration. (MICHAEL ABRAMS/STARS AND STRIPES) 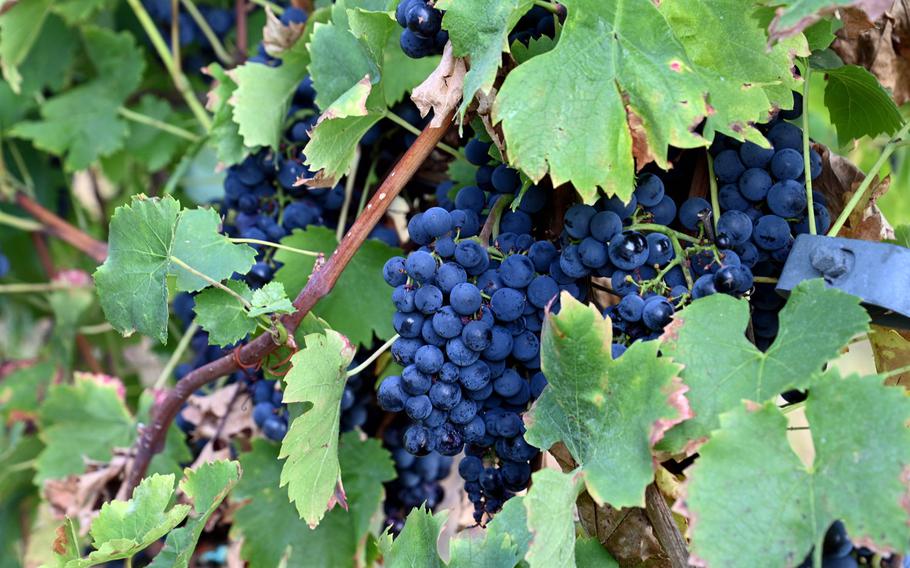 These grapes in a vineyard outside of Bad Bergzabern, Germany, have probably been harvested by now, but the vineyards of the German Wine Road are always a nice place for a stroll. (MICHAEL ABRAMS/STARS AND STRIPES)

On a sunny but cool autumn morning, we headed out for a drive along the German Wine Road. Our aim, as always, was to start at its southern end at Schweigen, near the French border, and work our way back up to the northern end near Bockenheim. And like always, we didn’t make it.

Along the Deutsche Weinstrasse, as the Germans call it, there is always a vineyard, a winery, a castle or a town worth stopping at that keeps us from our goal. This time, it was Bad Bergzabern.

We had started at the Weintor, a giant gate that marks the beginning, or end, of the Weinstrasse. We bought apples from a farmer’s stand there, then puttered up the road.

Coming to Bad Bergzabern, we looked it up on the web and deemed it interesting enough for a stop. Following the signs to the center, we found one of the town’s sights ahead of us, the Schloss.

Built in the 16th century, the palace is quite imposing. But the view is sort of marred by the big parking lot in front of it and a closer look showed parts of the building were worse for wear. Today it houses the city administration.

The town dates back to at least the 13th century when Rudolf of Habsburg granted it city rights. Ruled by the dukes of Zweibruecken, they built what is the town’s most attractive sight, the Gasthaus zum Engel. A Renaissance structure built in 1579, it was used as ducal administrative offices. Later it was privately owned and featured an inn and tavern. Today it houses the city museum but is closed due to the coronavirus.

We followed Koenigstrasse, past old half-timbered houses, until it met Marktstrasse and the town’s market square.

The sun made it warm enough to sit outside, so we enjoyed lunch on the square with the Marktkirche towering over us.

First built in the 14th century, it has gone through many renovations over the centuries, ending up in neo-Gothic style. It is topped by a graceful spire, but what really makes the church interesting is its freestanding steeple. Separated by a courtyard from the church, it was once a tower that was part of the town’s medieval fortifications.

After lunch, we wandered up and down the town’s cobblestone streets, passing other sights.

The Dicker Turm, or Fat Tower, is aptly named. Seemingly as wide as it is tall, it was built around 1300 and was also part of the medieval fortifications.

Nearby is the Bergkirche, the Baroque 18th century Lutheran church. Behind it is the small Hunspacher Plaetzl.

On this square stands an old church bell. Cast for a church in nearby Landau in 1733, it was supposed to be transported to Strasbourg in 1794, melted down and recast as a cannon. Somehow it got stuck in Hunspach, an Alsatian village, where it was used as the church bell until it was damaged in World War II. It was returned to Bad Bergzabern in 1968.

The Bad in the town’s name signifies that it is a spa town. The spa district with its park and baths is west of the old town. But since we were not there for the cure, it was time to leave Bad Bergzabern.

We actually continued the drive along the Weinstrasse for a little while longer, stopping to buy wine in Edesheim, before heading to the autobahn as the sun began to set behind the hills.

Maybe next time we should start the journey in the north and head south.

DIRECTIONS: From Kaiserslautern, take highway B48 straight to Bad Bergzabern. It is only about 36 miles, but takes about an hour on this scenic route. From Wiesbaden, it is about 85 miles on autobahns A63, A61, A650 and A65. From Stuttgart, take autobahn A8 and A5, then highway B10 and B427 for the approximately 70-mile drive.

TIMES: Anytime, but of course the better the weather, the nicer the visit.

FOOD: There are a number of restaurants in the center of town, but also on the outskirts.