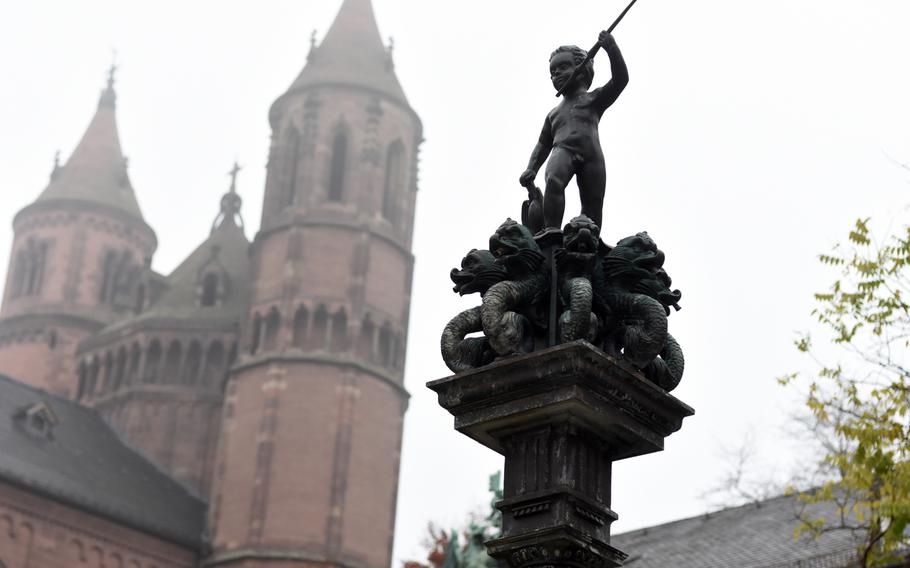 Statues and symbols of dragons can be found throughout the city of Worms, an old city in southwestern Germany on the Rhine River. This statue of a boy standing over dragons stands near St. Peter's Cathedral, one of three Romanesque churches in Germany. ()

Statues and symbols of dragons can be found throughout the city of Worms, an old city in southwestern Germany on the Rhine River. This statue of a boy standing over dragons stands near St. Peter's Cathedral, one of three Romanesque churches in Germany. () 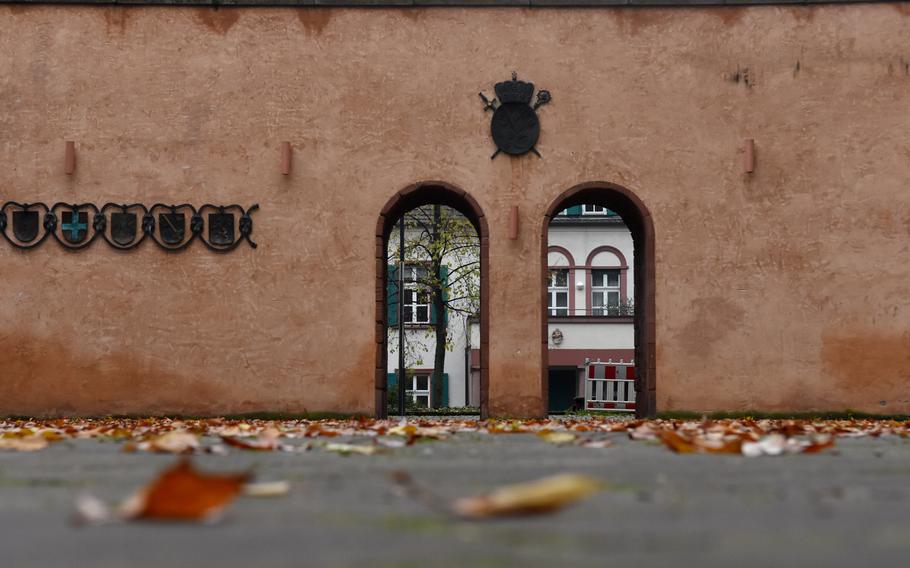 Fall leaves are strewn across the bishop's courtyard outside St. Peter's cathedral in Worms, Germany. () 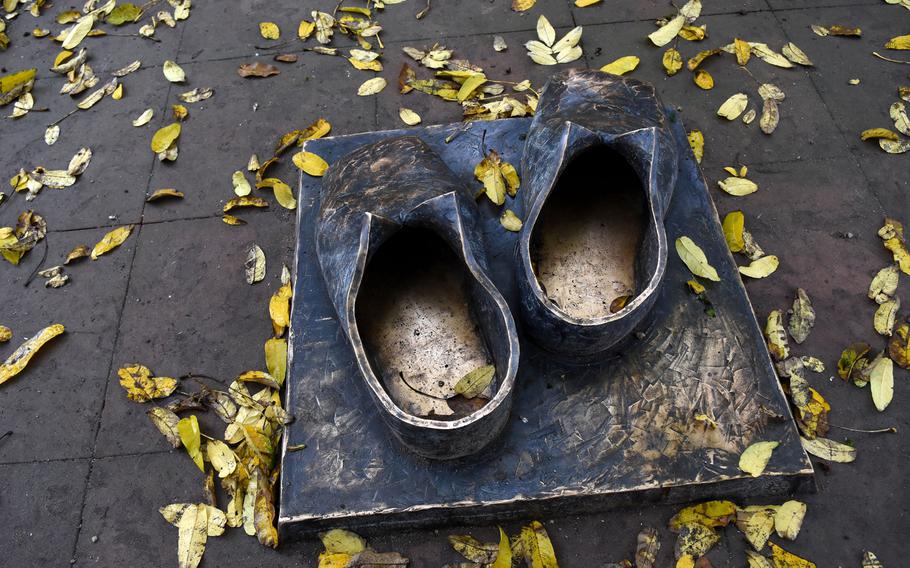 Symbolic shoes represent where Martin Luther refused to recant his teachings in 1521 in Worms, Germany. The site is now part of Heylshof Garden. () 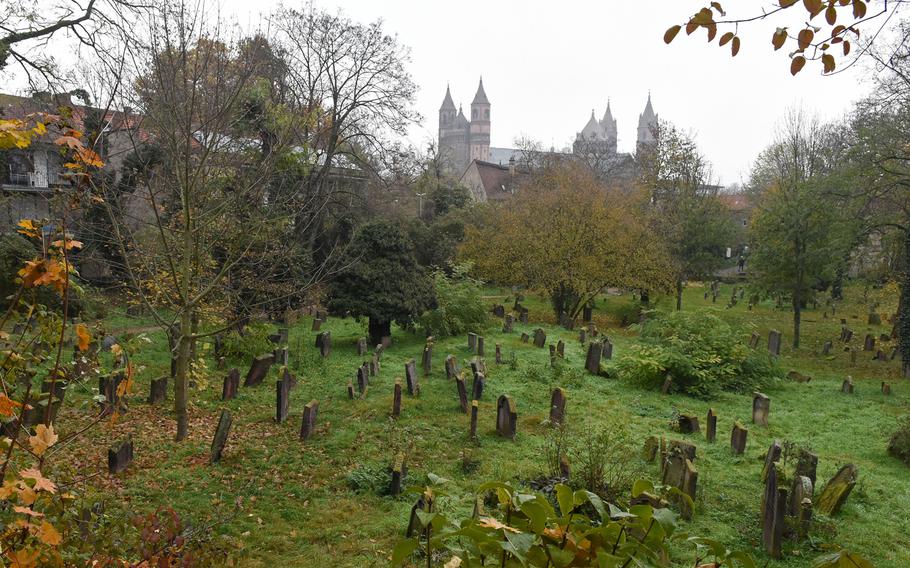 The Jewish cemetery in Worms, Germany, is filled with more than 2,000 moss-covered gravestones. () 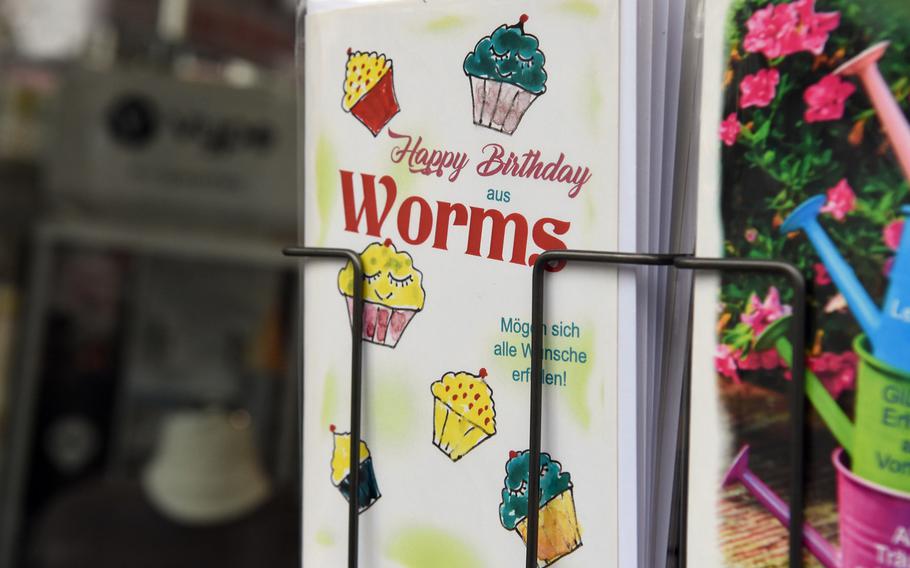 A birthday card from Worms, Germany. () 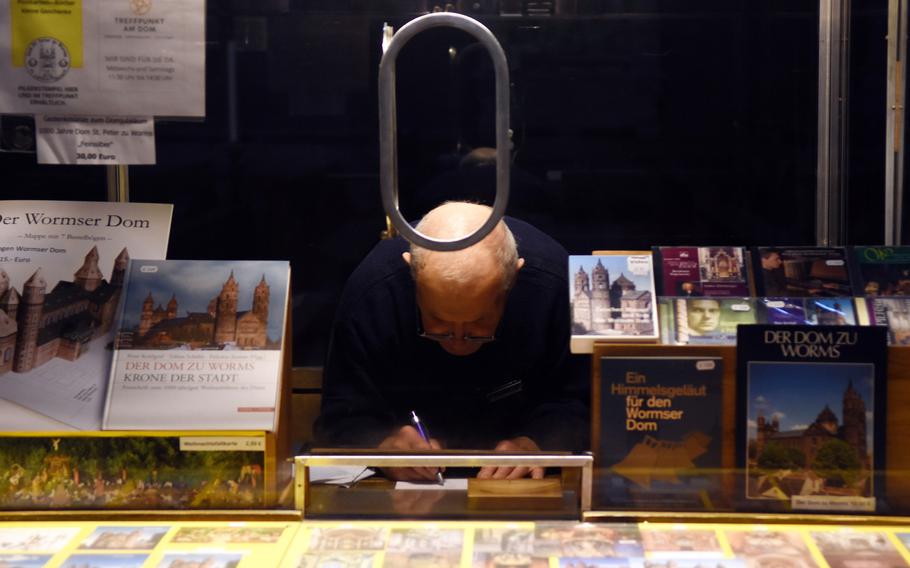 A man works behind an information booth inside St. Peter's Cathedral in Worms, Germany. () 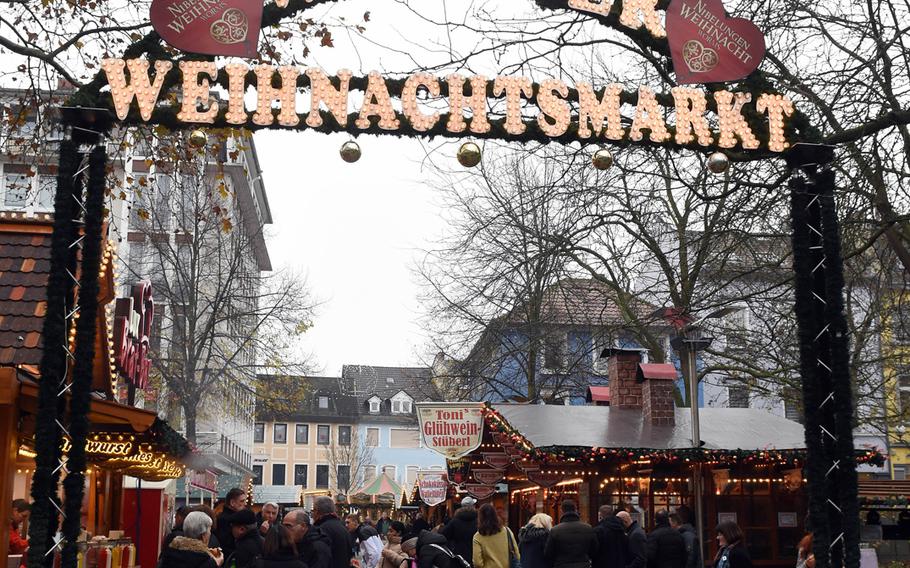 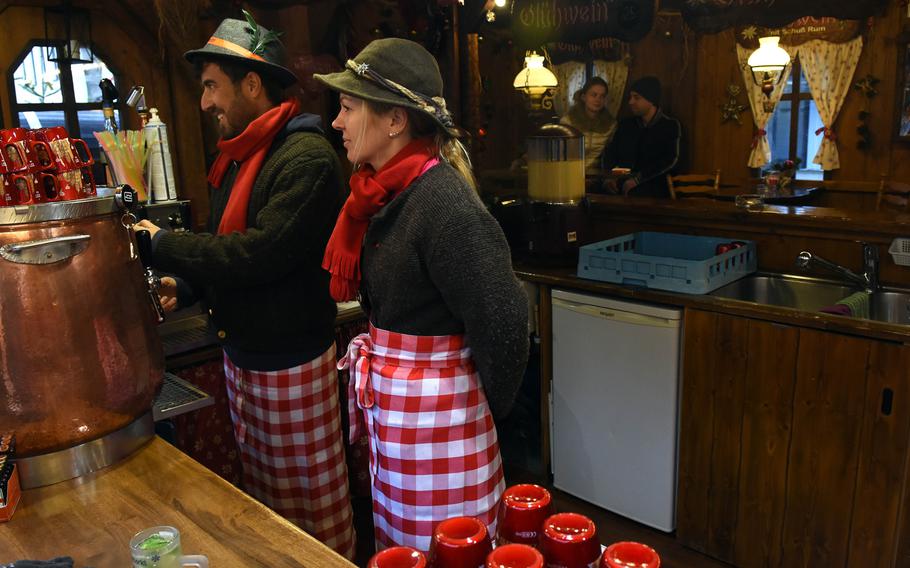 Mulled wine is served up in traditional German garb at the Christmas market in Worms, Germany. () 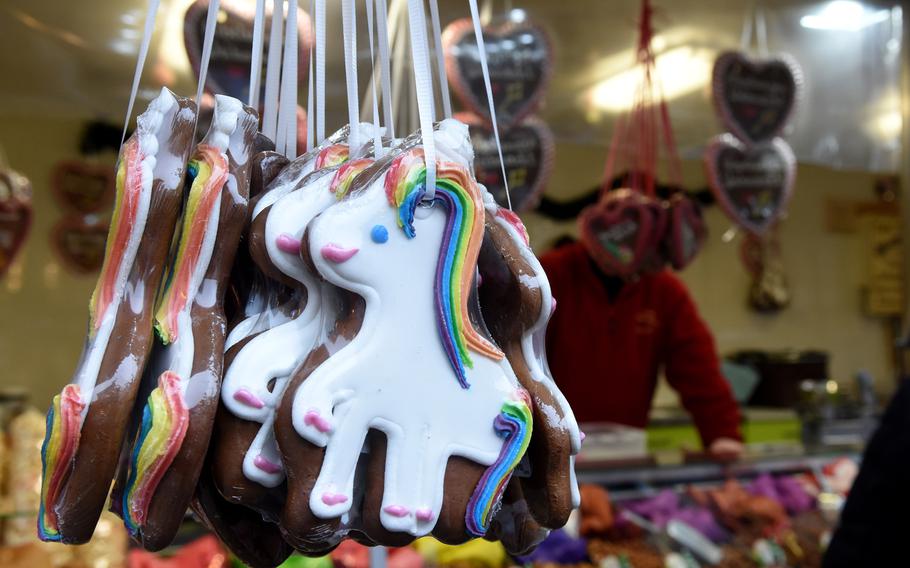 Gingerbread cookies decorated as unicorns hang from a stall at the Christmas market in Worms, Germany. () 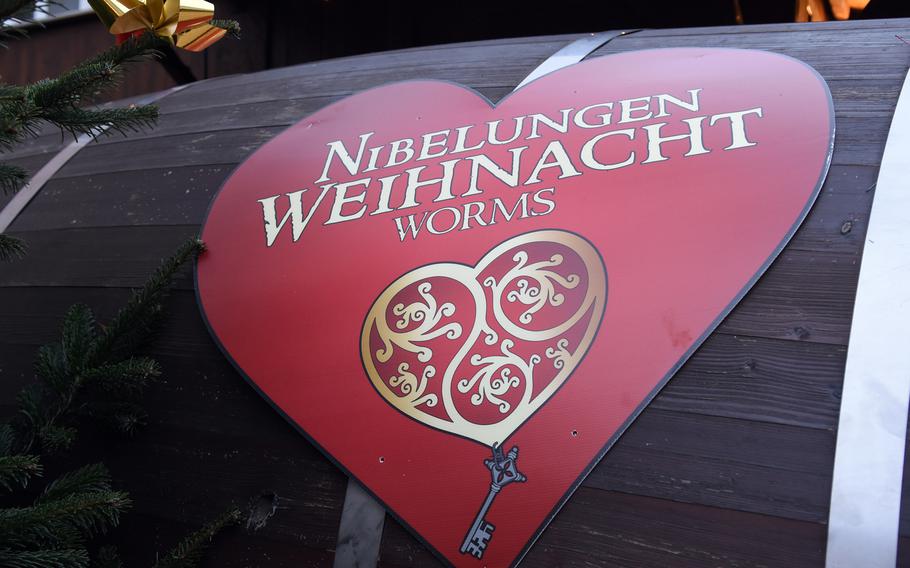 There are more endearing German cities to see than Worms, but few are older.

All one needs to do in Worms is wander through the city, past empty storefronts and commercial buildings, to discover a treasure trove of more than 6,000 years of history.

A witness to some of Europe’s most significant cultural and political events during the Middle Ages, the city once inspired an epic poem involving a lovestruck dragon slayer and was the place where Martin Luther refused to recant his teachings.

Modern-day Worms is more industrial grit than old European charm. But its history remains a source of pride, evident in the many parks, museums and churches that remain accessible to the public and serve to preserve the stories of long ago.

A brochure in English from the tourist office maps out a walking tour that can be covered quickly in a few hours or over several days. Guided and individual city tours are also available. The map highlights 27 historical and cultural sites, starting with St. Peter’s cathedral, built in the 12th century and one of three Romanesque imperial churches along the Rhine River.

Other stops include the Nibelungen Museum, where visitors can learn about the legend of Siegfried the dragon slayer and his love for the warrior maiden Brunhilde, a tale set partially in Worms that inspired a famous German epic poem. Dragon statues and symbols are prevalent around the city.

The city’s annual Christmas market, which runs through Dec. 23, adds a little sparkle to the city.

The Worms Christmas market doesn’t ooze with character, but it has all the staples, from mulled wine to long bratwurst. There are also hearty potato pancakes seasoned with what tasted like nutmeg and potato fries. On the sweeter side, chimney cakes and blue-candied almonds with a “Frozen” movie theme would delight most kids.

Not too far from the holiday festivities is one of the most peaceful places to wander in Worms, the centuries-old Jewish cemetery. Many of its 2,000 moss-covered gravestones look weary, as if they may tip over any day, their faded Hebrew inscriptions impossible to read. How the space survived the Nazis and World War II — by the end of which not one Jewish person remained in Worms — remains a mystery.

DIRECTIONS: Worms is northwest of Mannheim and less than an hour’s drive from Kaiserslautern. For driving directions, put Markplatz in your GPS, which will take you to the old town center. There are several parking garages downtown.

TIMES: The Christmas market in Worms runs through Dec. 23. Open daily from 11 a.m. to 8 p.m. The Jewish cemetery and synagogue are open most days, as are most churches and the cathedral. Museums are closed on Mondays.

INFORMATION: Visit the tourist information center in Worms to pick up free brochures about the city and find out about guided tours. Address: Neumarkt 14 67547 Worms, Germany; phone, +49 (0) 6241-853-7306; Website: worms.de/en/tourismus/tourist-info