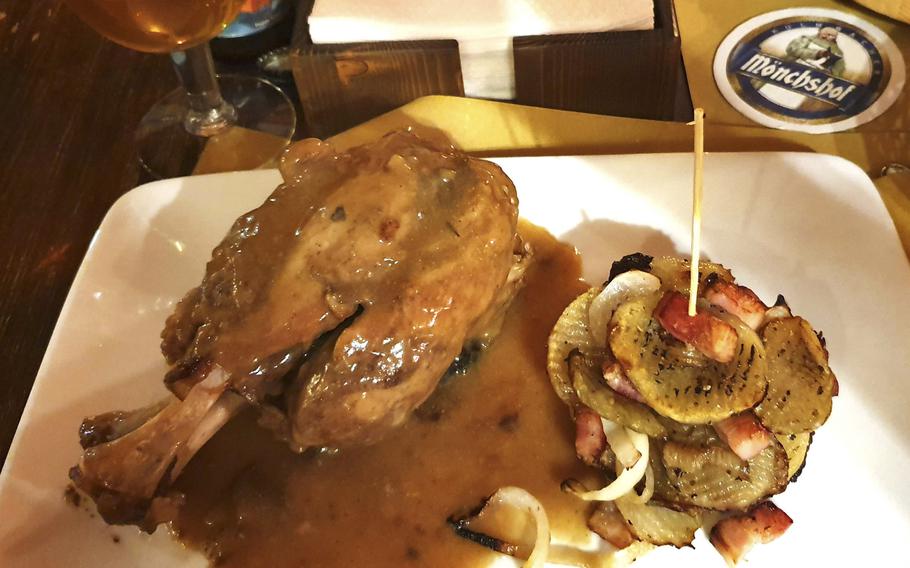 Buy Photo
The pork shank braised in German red bock beer is served with a side of roast potatoes, bacon and onions at the German Pub and Alehouse in Sacile, Italy. (Norman Llamas/Stars and Stripes)

Buy Photo
The pork shank braised in German red bock beer is served with a side of roast potatoes, bacon and onions at the German Pub and Alehouse in Sacile, Italy. (Norman Llamas/Stars and Stripes) 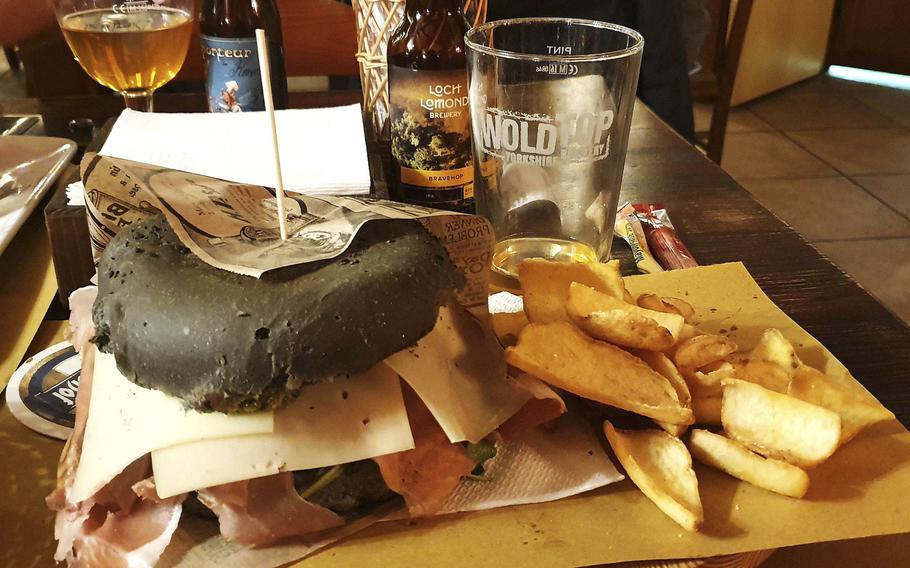 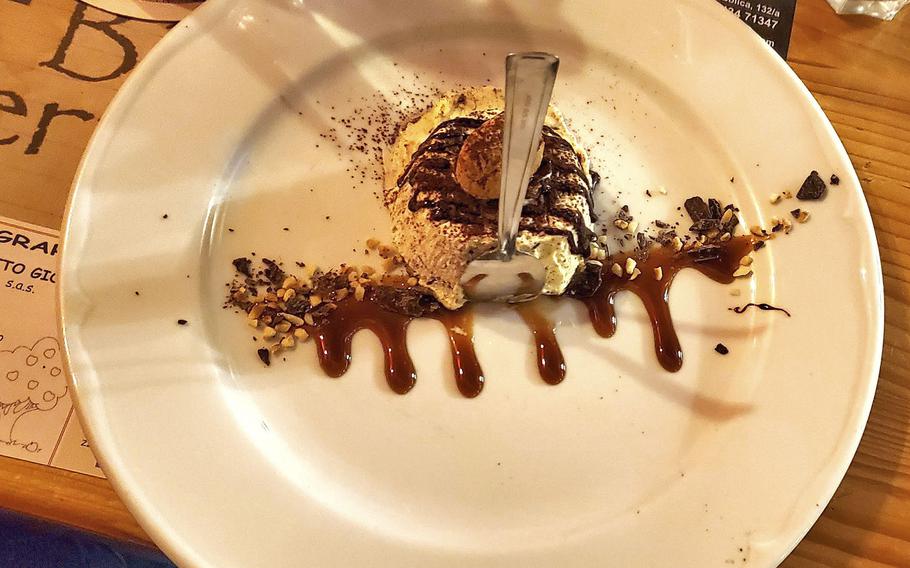 Buy Photo
Vanilla ice cream with caramel is one of the many homemade desserts available at the German Pub and Alehouse in Sacile, Italy. (Norman Llamas/Stars and Stripes) 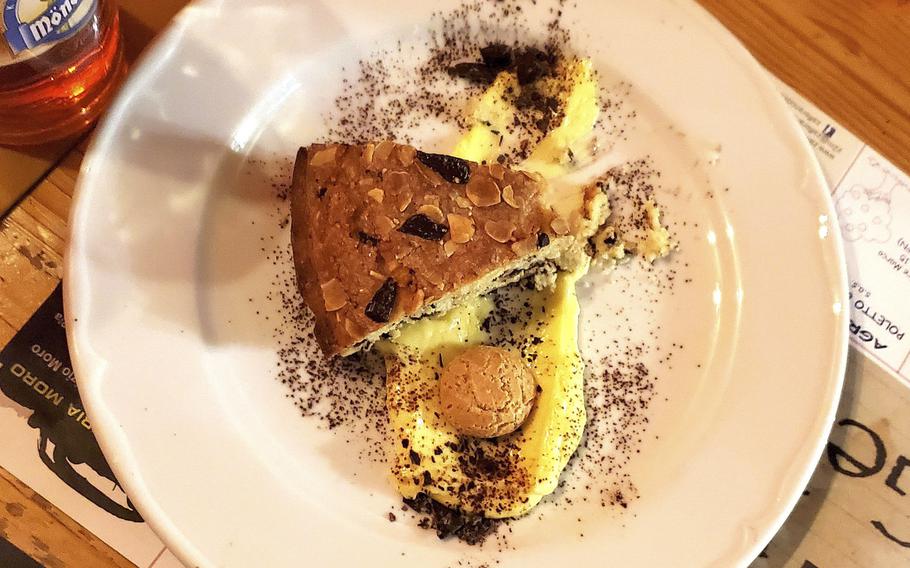 Buy Photo
The chocolate and almond tart is one of the delicious assortment of homemade desserts offered at the German Pub and Alehouse in Sacile, Italy. (Norman Llamas/Stars and Stripes) 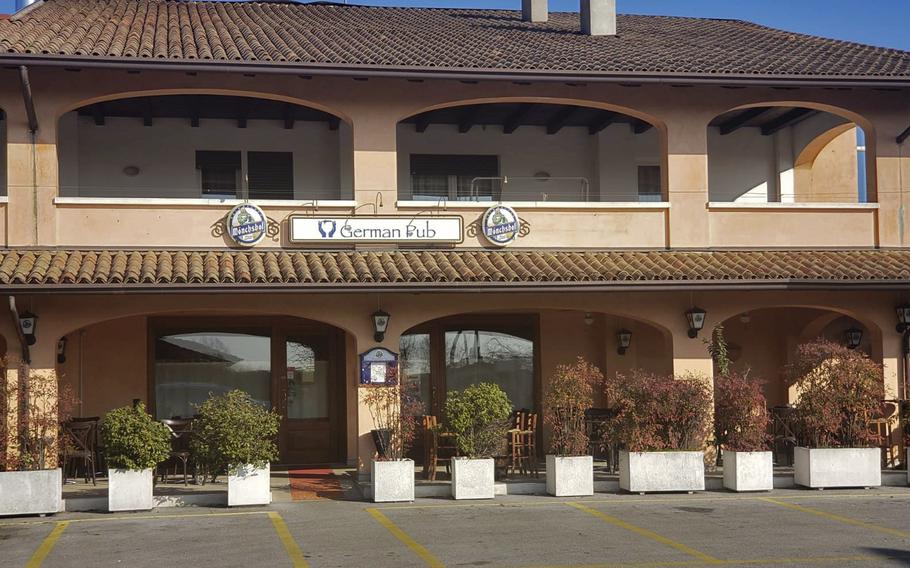 Buy Photo
The German Pub and Alehouse is on the outskirts of the town of Sacile, Italy, about 9 miles from Aviano. (Norman Llamas/Stars and Stripes)

If you’re looking to dine on something other than the traditional Italian fare you can easily find near Aviano, head to the quaint little town of Sacile, about nine miles southwest of the base.

On the outskirts, you’ll find the German Pub and Alehouse, a large eatery with a cozy, welcoming atmosphere.

The menu, like the restaurant, is also large, offering classic dishes from the Tyrol region of Austria, international appetizers like mozzarella sticks, and, because this is Italy, pizza.

There are also more than 60 types of beer available, including eight on tap, from Germany, Belgium, England and Scotland, and seasonal beers that vary throughout the year.

For meat-lovers, for instance, the second course menu includes a South Tyrolean dish, a Bavarian dish and a German dish, all offering a mixture of sausages local to the particular dish’s namesake area or country. All are served with potato dippers and a cabbage salad.

Other menu offerings include pasta dishes, including spaetzle, which is pasta made with fresh eggs; Wiener schnitzel; and mixed cold cuts, which the restaurant is known for. Burgers and a large variety of side dishes are also available, as are regional dishes such as frico — a dish from the Friuli Venezia Giulia region, made with cheese and potatoes — and traditional Italian offerings like aged cheeses, cured meats and polenta.

My wife ordered the pork shank braised in German red bock beer, served with a side of roasted potatoes, bacon and onions. I had the 200-gram burger on a blackened roll with cured ham and potato dippers. It was larger than I imagined it would be, and it was delicious.

This was our second time visiting this restaurant, and the food did not disappoint, with each dish’s strong flavors leaving us to wonder whether we’d somehow been magically transported to Austria or Germany.

The very reasonable prices — meals are between $14 and $20 — are the icing on the cake.

Drinks: Beers from all over Europe, and a full bar with an extensive beverage selection as well as fountain sodas, juice, water and coffee.

Menu: Italian and English. Most of the workers speak English, are friendly and very helpful.