Games of the Week 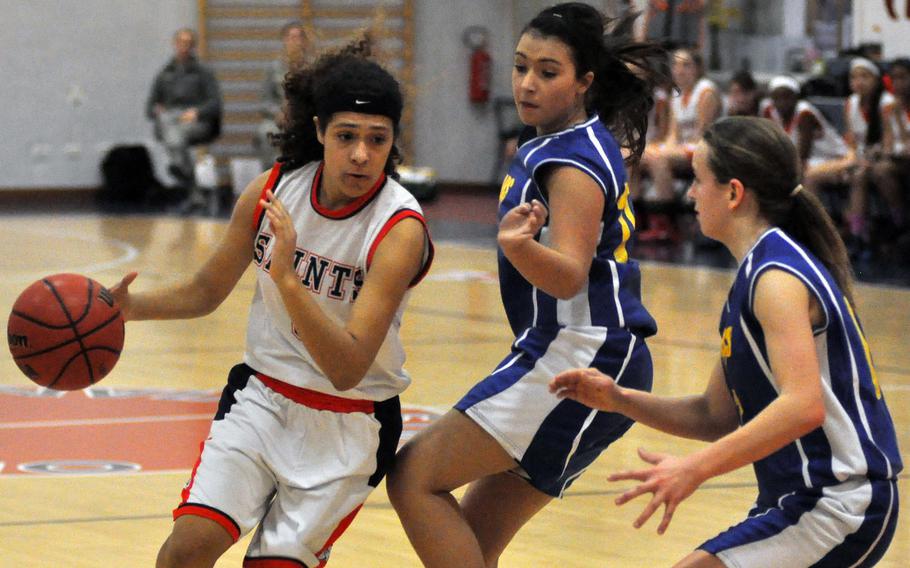 Aviano's Jasmyne Hinkamp drives around Sigonella's Halie Gasporra and Katie Cauble in the Saints' 30-14 victory over the Jaguars, Jan. 10, 2014. Aviano travels to Naples this weekend and Sigonella is in Vicenza. . (Kent Harris/Stars and Stripes)

Aviano's Jasmyne Hinkamp drives around Sigonella's Halie Gasporra and Katie Cauble in the Saints' 30-14 victory over the Jaguars, Jan. 10, 2014. Aviano travels to Naples this weekend and Sigonella is in Vicenza. . (Kent Harris/Stars and Stripes) 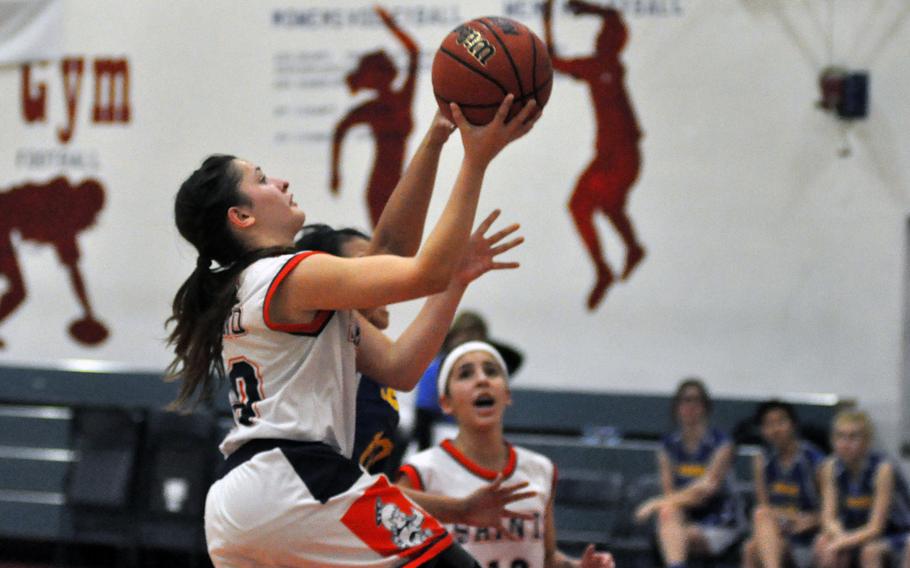 Aviano's Jasmyn Green scores on a layup after one of her 10 steals in the Saints' 30-14 victory over Sigonella, Jan. 10, 2014. Aviano travels to Naples this weekend and Sigonella is in Vicenza. (Kent Harris/Stars and Stripes)

This weekend’s four tipoffs at Schweinfurt’s Conn Barracks represent the final DODDS-Europe basketball home games to be played by either Schweinfurt, Bamberg or this year’s Schweinfurt/Bamberg hybrid program.

Both schools are scheduled for closure at the end of the school year and have already shed the bulk of their student populations. Only a last-ditch measure to merge some of the schools’ athletic teams salvaged a final sports season.

There probably won’t be a movie-style happy ending in Bavaria, however. The dwindling base of talent and resources likely places both the Razorback boys and girls firmly out of reasonable contention for a Division II championship.

Neither team has recorded a victory this season, and a win won’t come easily this weekend against Division I program Vilseck.

Two down, one to go.

But this one might be the toughest challenge yet.

Division III upstart Sigonella has shaken up the Italian hoops power structure over the last two weeks by splitting doubleheaders against Division II powers Naples and Aviano. The Jaguars can finish the job this weekend if they can knock off unbeaten Division II frontrunner Vicenza.

Cougars coach Eric Wakefield says his team will be ready. Just like it is for every game on its schedule.

For Wakefield, regular-season games are “opportunities to improve.” He measures gains in units of effort expended and lessons learned. An undefeated season isn’t a priority; the season’s only goal is being ready for the tournament.

Though the Cougars are a perfect 6-0 in DODDS-Europe play entering this weekend, they’re 9-4 overall when including games against Italian under-19 youth squads. Three of those losses have come by 20 or more points. But Wakefield said they have had their desired impact.

“What is important is playing hard, playing smart, and having fun each time we are given the opportunity,” Wakefield said. “If the tournament were to start today, I believe we would be ready.”

If recent results are any indication, Sigonella will certainly be ready for Vicenza.

At least one of the two undefeated teams in Italy won’t be that way by Saturday evening.

With matching 6-0 records, the traveling Saints and homestanding Wildcats represent the class of DODDS-Europe hoops in Italy and, arguably, Division II as a whole. Division I frontrunner Wiesbaden is the only other DODDS-Europe hoops team to enter the weekend without a loss.

Northern contenders such as SHAPE, AFNORTH, Ansbach, Hohenfels and Black Forest Academy will be heard from when the Division II tournament starts next month. But for now, this weekend’s Aviano-Naples clash represents a power struggle atop not just a country, but a DODDS-Europe division.

Aviano has won five of its six games by double digits. Naples has generally won by a narrower margin, but was seriously threatened only in a 38-36 win over Vicenza on Dec. 14. But Aviano falls short in the strength-of-schedule department, as the Saints have yet to face the Vicenza team that gave Naples a hard time.

With records and statistics failing to declare a superior team, it seems the only way to settle the issue is on the court this weekend.