From perfectly prepared octopus to pasta tossed in a cheese wheel, Italiano Sapori Veri is a delight 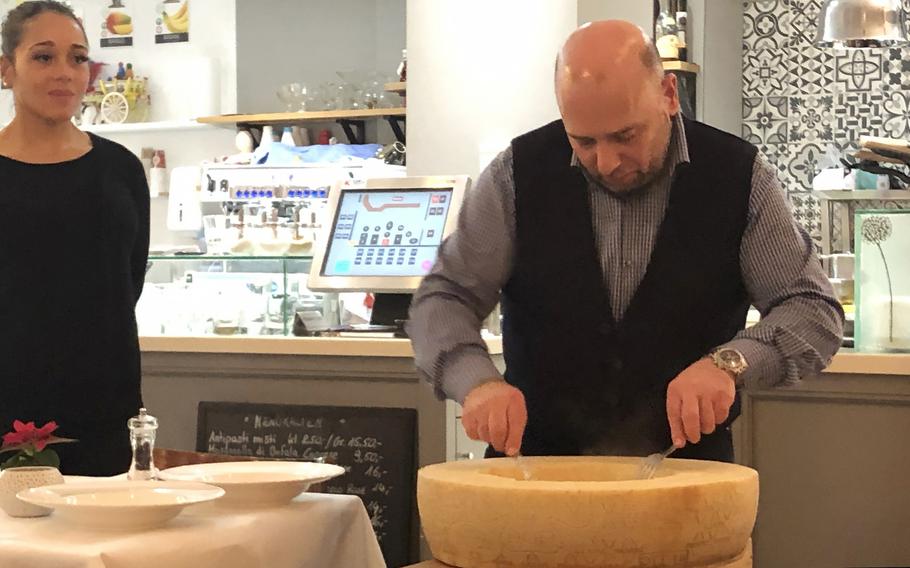 Homemade pasta is mixed in a wheel of parmesan, one of the specialties of the Italiano Sapori Veri restaurant in Kaiserslautern, Germany. (Karin Zeitvogel)

Homemade pasta is mixed in a wheel of parmesan, one of the specialties of the Italiano Sapori Veri restaurant in Kaiserslautern, Germany. (Karin Zeitvogel) 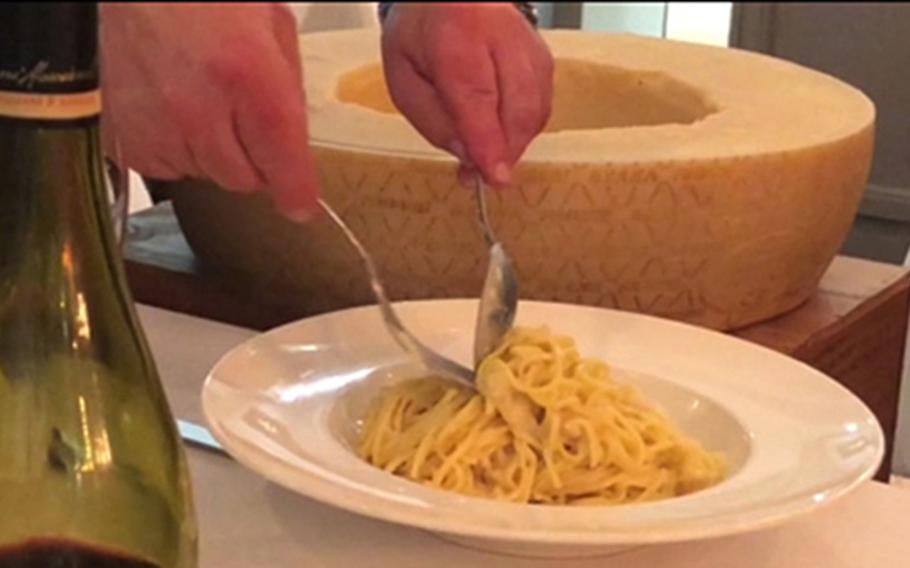 Pasta is scooped into a shallow bowl after being mixed in a hollowed out wheel of Parmesan cheese at the Italiano Sapori Veri restaurant in Kaiserslautern, Germany. (Karin Zeitvogel) 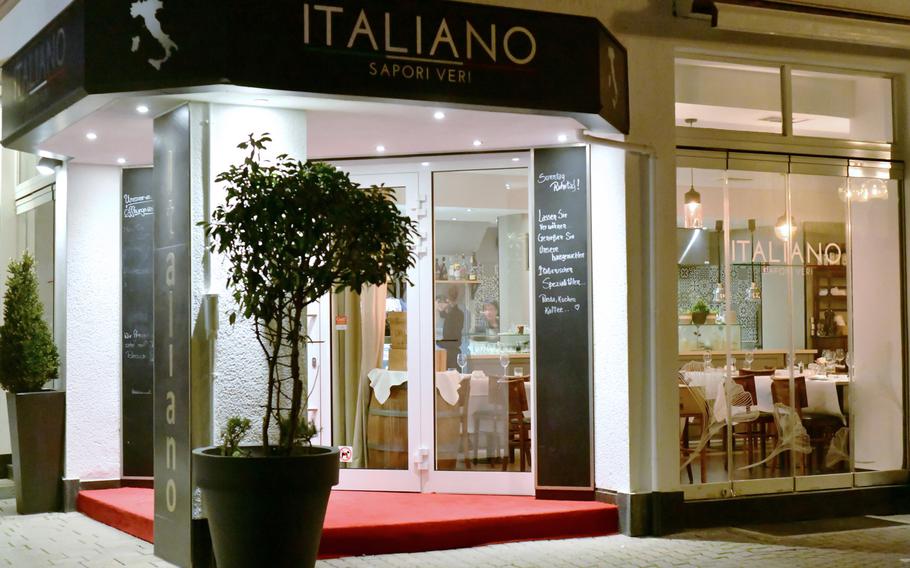 The Italiano Sapori Veri restaurant on Eisenbahnstrasse in Kaiserslautern, Germany offers homemade Italian specialties and a warm welcome, even when it's almost closing time. (Karin Zeitvogel) In the foreground, risotto with octopus, and in the background, a diner tucks into pasta prepared in a wheel of parmesan at Italiano Sapori Veri in Kaiserslautern, Germany. (Karin Zeitvogel) 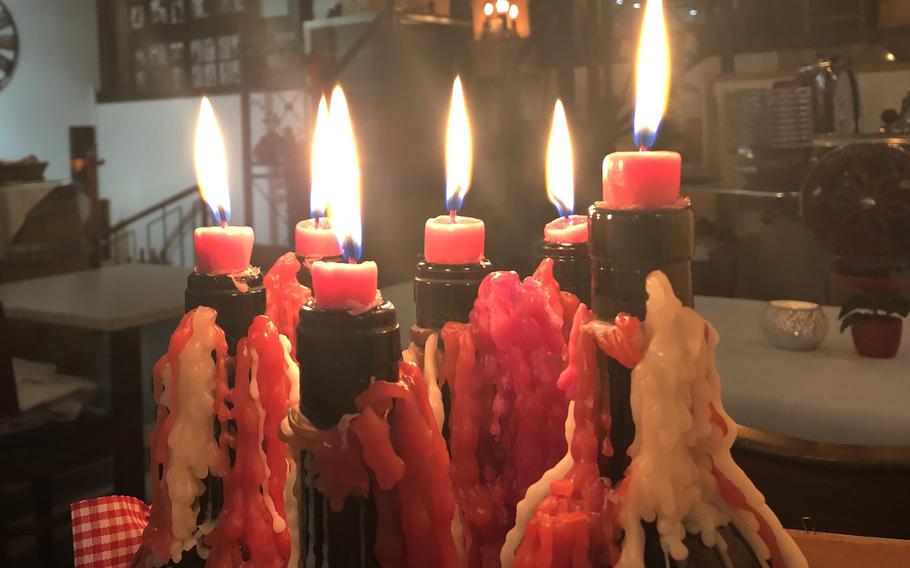 Candles in wine bottles may not be essential to a good night out but these added to the ambiance at Italiano Sapori Veri in Kaiserslautern, Germany. (Karin Zeitvogel)

It was late on a Monday in winter and many restaurants in Kaiserslautern were closed. By the time my guests who’d just arrived from America and I found a place that was open, it was 9:45 p.m. but it said on the door they were closing in 15 minutes. When it gets that close to the chef clocking off, many eateries limit their menu options and want you in and out faster than you can say “zabaglione.”

But not Italiano Sapori Veri. After being shown to a table, we perused the chalkboard menu that the waitress brought over to us, and opted for risotto with jumbo shrimp, penne with mushrooms, and a dish that intrigued us: pasta prepared in a hollowed-out wheel of Parmesan cheese.

There was no shrimp left, so the chef offered octopus instead, and I accepted. Done well, octopus is melt-in-the-mouth delicious. Done badly, it’s like eating the rubber seal from an old pressure cooker. This would be a good test of the freshness of the food and skills of the chef, I thought.

Several minutes later, a gentleman placed a side table and wheel of parmesan measuring about two feet across by our table. After serving our risotto and penne, the waitress returned to the kitchen and emerged with homemade linguini, which she deposited in the middle of the cheese wheel. The pasta was scooped and swirled around, allowing Parmesan to melt onto the noodles, smothering them in deliciousness.

I silently wished that I’d ordered that instead of the risotto, although my arborio rice and octopus were cooked to perfection. My guest kindly offered me a forkful of the pasta-prepared-in-a-wheel-of-Parmesan, probably because he’s my son and I’d have grounded him if he hadn’t. It was every bit of melt-in-the-mouth scrumptiousness that I’d imagined it would be.

The main courses were 16 euros each, and, we had a bottle of red wine and a bottle of mineral water to wash them down.

It was close to midnight when we left. At no time did we feel we were being pressured to leave — not even when the waitress went home well before we did.

Everything about Sapori Veri exceeded my expectations, and I fully intend to go back for pasta prepared in a hollowed-out wheel of Parmesan or more of their succulent octopus risotto if they’re out of shrimp — which I’m quietly hoping they will be.

Parking is free on Eisenbahnstrasse after 7 p.m. and the underground lot by the Stiftsplatz is a short walk from the restaurant. The main train station is roughly a 10-minute walk away.

Hours: The website says they’re open Monday to Saturday, 10 a.m. to 11 p.m. except for German holidays, when they’re open from noon until 9 p.m. But when we went in mid-December, the information on the door said they close at 10 p.m. The kitchen closes at 9:30 p.m., according to the website, but we got there after 9:30 p.m. and were served a great meal. Closed Sundays during the winter, the website says.

Information: The menu changes regularly to reflect what fresh ingredients are available. In the summer, they do lighter fare and homemade gelati. Reservations aren’t necessary, but can be made by calling +49 (0)631 637 940 67.