French town of Bitche is a must see for military enthusiasts 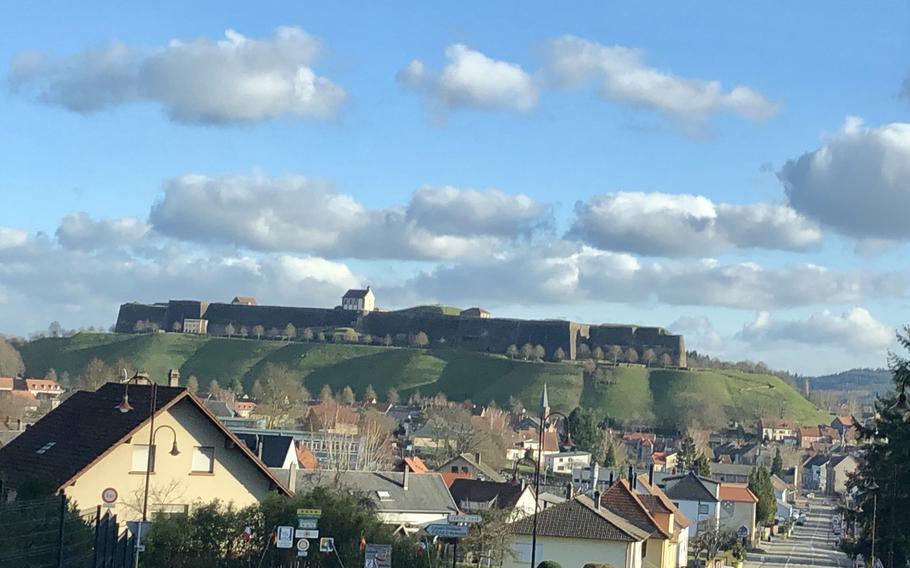 The Citadel of Bitche towers over the center of the town. This year Bitche will celebrate the 150th anniversary of the Franco-Prussian war in which the fortress endured a 220-day Prussian siege. ()

The Citadel of Bitche towers over the center of the town. This year Bitche will celebrate the 150th anniversary of the Franco-Prussian war in which the fortress endured a 220-day Prussian siege. () 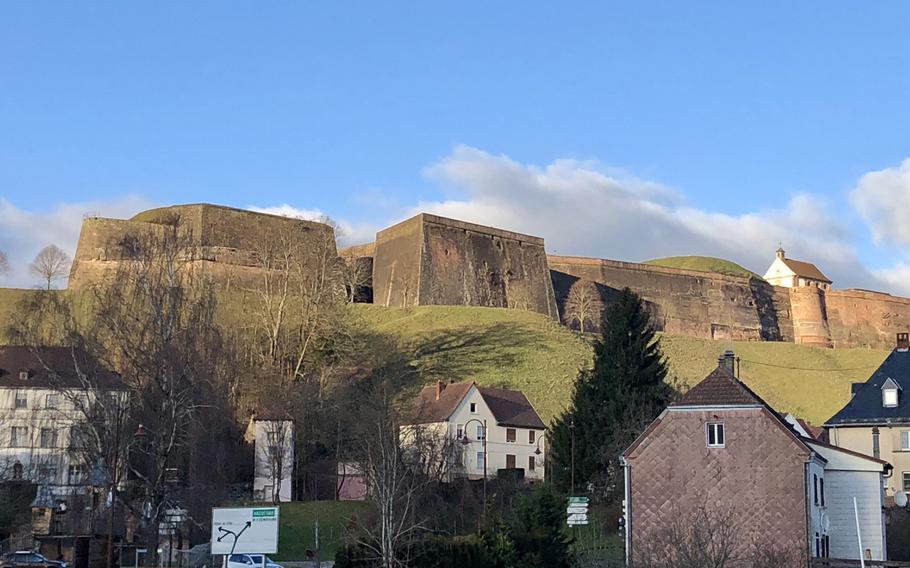 Buy Photo
Another view of the massive Citadel that formed a key element of the defense of eastern France in the 19th century. (Slobodan Lekic/Stars and Stripes) 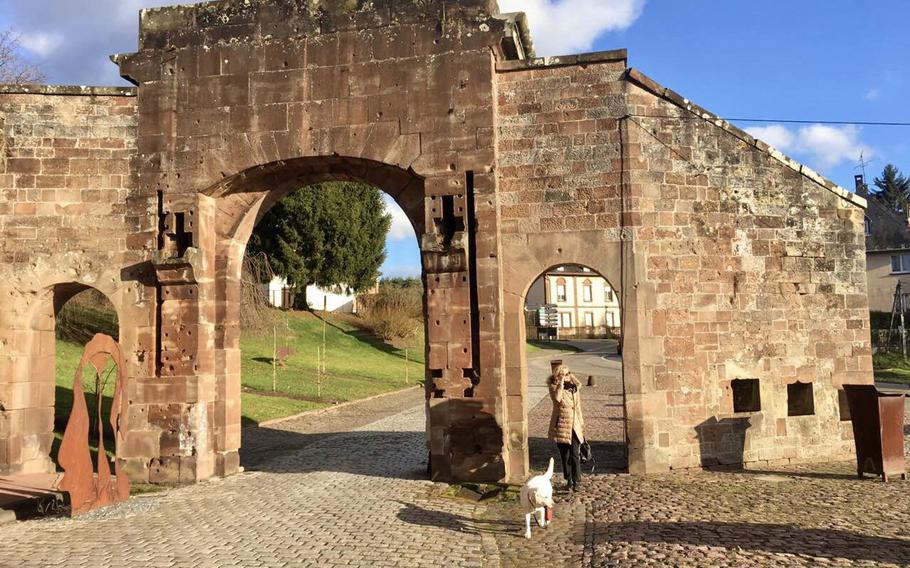 Buy Photo
A woman strolls through the Strasbourg Gate in Bitche, France, near the little museum displaying weapons, uniforms, flags and other items left over from the liberation of the city in 1945 by the U.S. 100th Infantry Division. (Slobodan Lekic/Stars and Stripes) 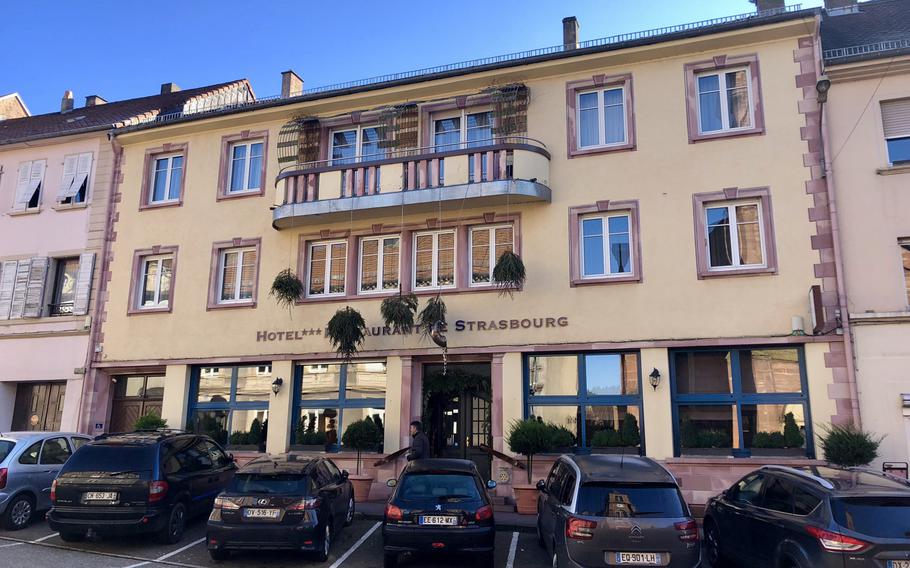 Buy Photo
The Strasbourg Hotel in Bitche, France. It has a first class restaurant and is a must for those wishing to experience fine dining in France. (Slobodan Lekic/Stars and Stripes) 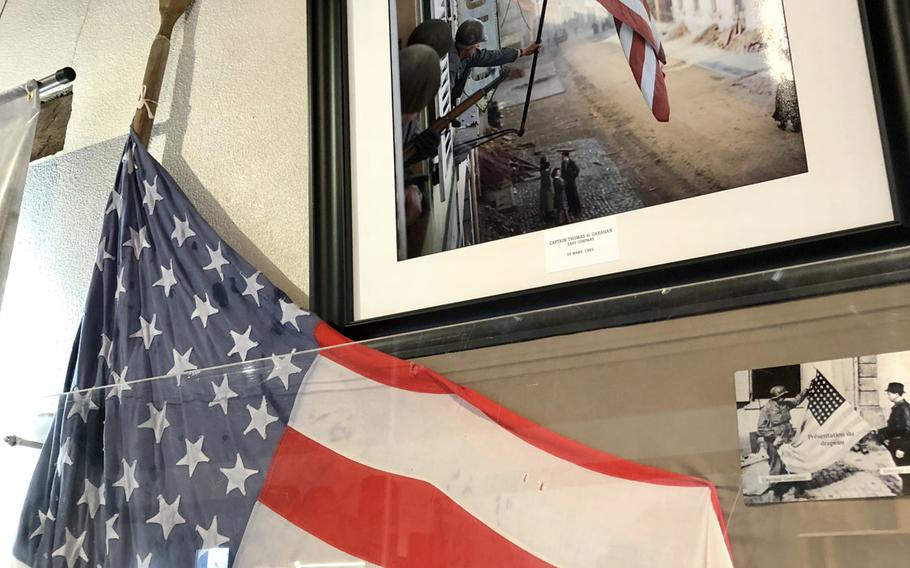 Buy Photo
The actual U.S. flag that was hoisted on city hall in Bitche, France, during the liberation of the town by the 100th Infantry Division. Above it is the photo of the event in 1945. The liberating troops instantly became known as the ''Sons of Bitche.'' (Slobodan Lekic/Stars and Stripes) 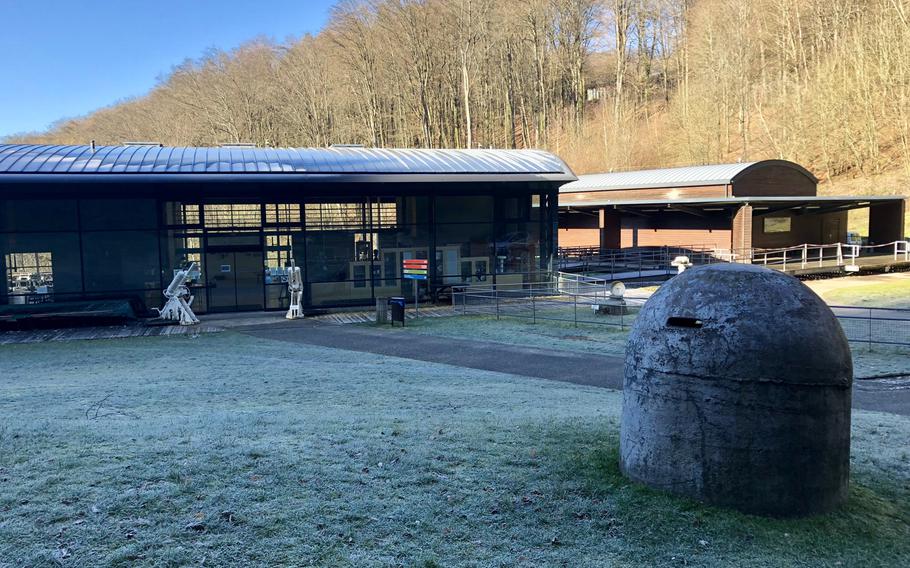 Buy Photo
Visitors center at the entrance to the extensive underground fortress of Simserhof, about 3 miles from the center of Bitche, France. The fort, a hub of the pre-WWII Maginot Line, is closed to visitors until April. (Slobodan Lekic/Stars and Stripes) 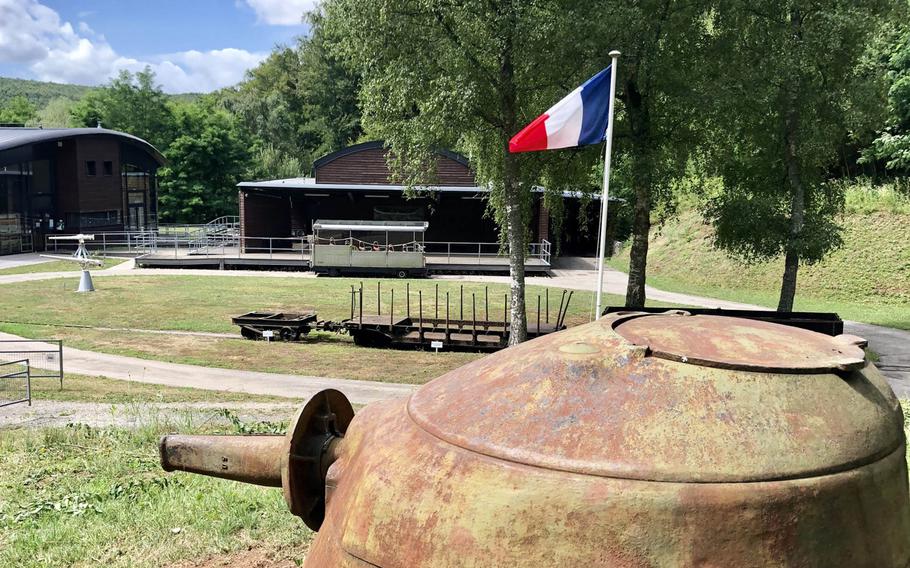 Buy Photo
A view of the rail car that takes visitors into the Simserhof underground fortress on the Maginot Line close to Bitche. The fortress was renovated after WWII and served as a depot for the French army until the 1970s. (Slobodan Lekic/Stars and Stripes) 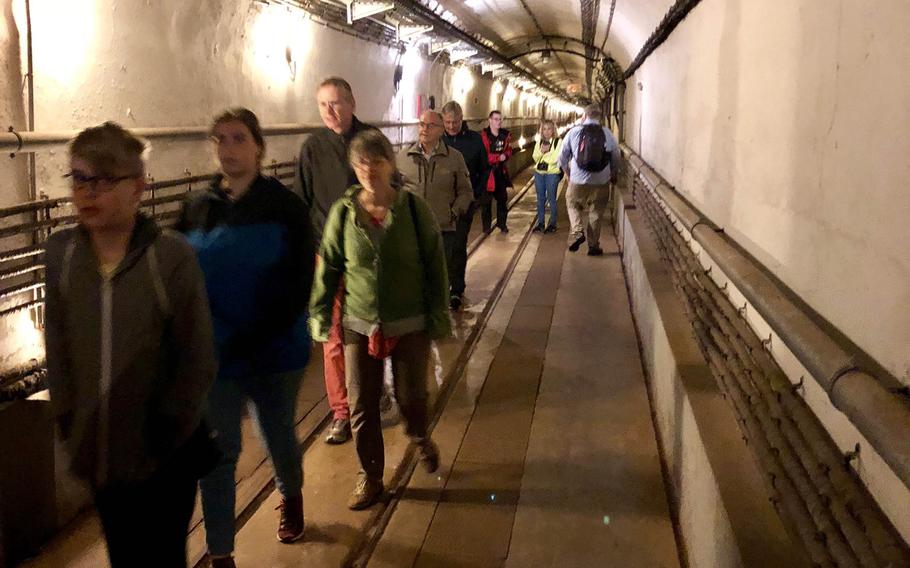 Buy Photo
Visitors file through the long underground galleries at the Simserhof fortress on the Maginot Line. The fortress is located about 60 miles from the Kaiserslautern/Ramstein area. (Slobodan Lekic/Stars and Stripes) 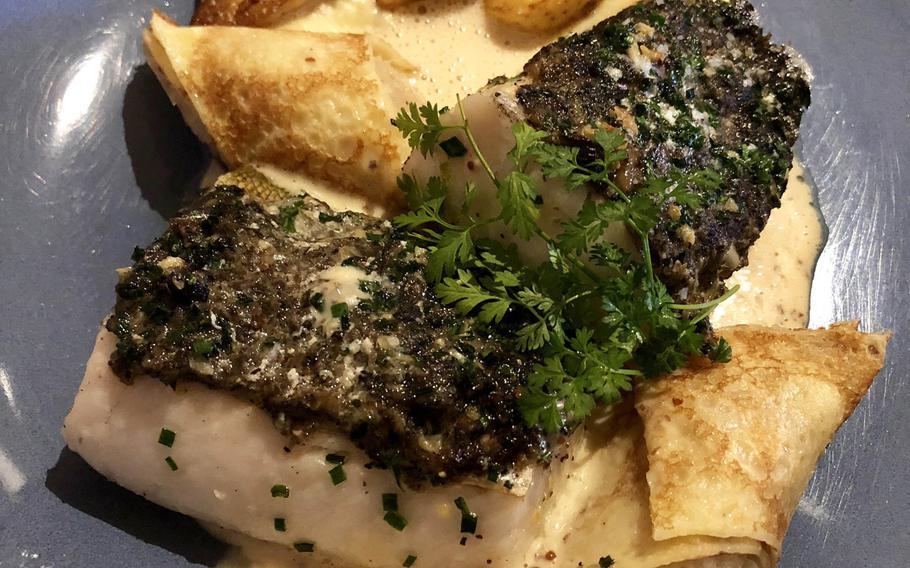 Buy Photo
A pike-perch fillet with Lorraine snails, sauerkraut pancake and white butter with mustard, as served at the Strasbourg restaurant in Bitche, France. (Slobodan Lekic/Stars and Stripes)

The Moselle department in eastern France is best known for its medieval villages with their half-timbered houses, its white wines and wonderful cuisine.

But the town of Bitche’s main claim to fame is its 800-year-old Citadel, a massive hilltop fortress that dominates the town once regarded as one of Europe’s most powerful military strongholds.

For Americans in the Kaiserslautern region, a daytrip to the closest town in France, located just 15 miles from Zweibrueken and its popular Fashion Outlet mall, offers a peek into a culture and tradition very different from than that of neighboring Germany.

I would recommend starting with a visit to the Citadel, perched on a rocky outcrop overlooking the center of the town. Visitors are guided through the underground tunnels and galleries, which are dotted with screens showing videos about life in the fortress with a focus on the long 1870 Prussian siege of Bitche. Ultimately, the Citadel was surrendered to the Prussians after the defeat of the surrounded French main armies at Sedan and Metz. It remained a part of Prussia until 1918, when Alsace and Lorraine were returned to France at the end of World War I.

The fortress, with its majestic views of the town and the hills beyond, is best experienced on a self-guided audio tour with a headset that activates itself as you approach points of interest throughout the tour.

This year, the city celebrates the 150th anniversary of the 1870 Franco-Prussian war — which established Germany as the dominant power in Europe — and the tourism board has prepared a series of events at the fortress to commemorate it.

In July, the castle will be the scene of a Middle Ages festival with a mock village constructed along its moats, and with jousting tournaments, displays of chivalry by sword-wielding knights and other activities designed to delight kids of all ages.

As you return to town from the Citadel, be sure to stop at the Porte de Strasbourg which houses a small “space of memory,” an exhibit devoted to the liberation of Bitche in 1945 by the U.S. 100th Infantry Division. It is full of weapons, photos, helmets and other military items found in the town or its vicinity, including the American flag hoisted by the GIs — who promptly became known throughout the Army as “Sons of Bitche” — on the city hall.

In May, Bitche plans to host surviving members of the unit to celebrate the 75th anniversary of the liberation, said Michel Klein, custodian of the exhibit.

Another must-see site for military buffs just a couple of miles outside town is Fort Simserhof, a major hub on the Maginot Line — a defensive system of fortifications built along France’s eastern border in the 1930s to prevent a surprise attack by Nazi Germany. The underground fort, which was used by the French army until the 1970s, has been turned into a vast museum offering visitors a glimpse of the most extensive infrastructure of the hundreds of Maginot Line fortifications. A three-hour tour of the combat blocks, underground sleeping quarters, kitchens and medical clinics includes a ride on a small train once used to ferry troops from one combat post to another.

The Maginot line extends from Luxembourg to the Mediterranean Sea, and Simserhof is the closest fort to the Ramstein and Kaiserslautern area that’s open to visitors.

While Bitche has long served as a military strongpoint, it also has other, unrelated attractions.

I would strongly encourage visitors to have a meal at the downtown Hotel Strasbourg, a gourmet restaurant where you can get a taste of the “haute cuisine” for which France is famous. The hotel offers “gastronomical overnight packages,” for which you get a room for the night, dinner and a visit to the local golf course — reportedly the best in eastern France.

The region around Bitche is also well worth visiting for its hiking trails through Alsatian villages with their quaint medieval half-timbered houses, which are particularly popular in summer.

DIRECTIONS: Bitche is about 50 miles southeast of Kaiserslautern. The easiest way to get there is to drive west on the A6 autobahn, turn south on the A8 all the way to the turnoff for the Fashion Outlet mall. From there follow the signs to Bitche, about 15 miles down a local road past Zweibrueken airport.