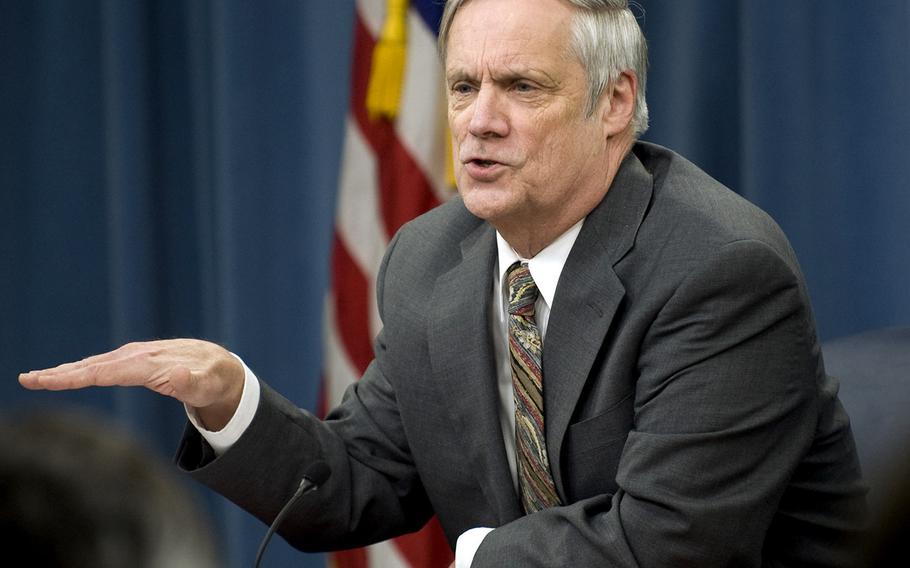 In a 2010 file photo, Under Secretary of Defense Comptroller Robert Hale takes part in a press conference. (Cherie Cullen/DOD)

WASHINGTON – A former Defense Department comptroller said Tuesday the public should be skeptical of the dire warnings of a readiness crisis coming from the military this year.

Robert Hale, who served under President Barack Obama, said the services do have some shortfalls but are likely putting their “worst foot forward” in hopes of scoring funding increases under the new administration, which has proposed a major defense buildup.

The comments come after the Republican chairman of the House Armed Services Committee recently blamed Obama administration officials for denying how thin and ill-prepared the military has become due to decreasing budgets in recent years.

Earlier this month, vice chiefs for the Army, Air Force, Navy and Marine Corps came to testify on Capitol Hill, and for the third year in a row painted an increasingly grim picture of grounded aircraft, units unready to fight and personnel shortages.

“There’s money available right now … This is a time when the services, if you will, want to put their worst foot forward and make clear all the problems that are there,” Hale said during a forum at the Brookings Institution, a liberal-leaning think tank in Washington. “So, I think we need to be a little skeptical.”

Hale, who directed the Defense Department budget from 2009 to 2014, did acknowledge what he deemed a small readiness problem. He said the military is experiencing a lack of spare parts and training, and will need additional funding to focus on “full-spectrum” readiness to handle threats of conventional warfare as well as terrorism and insurgencies.

“It is important to remember the Obama administration regularly proposed budgets that were $30 billion higher than Congress and the president were able to approve ultimately, and some of that money would have gone to readiness,” Hale said. “Now, we need to fix some of those problems.”

Last week, Rep. Mac Thornberry, R-Texas, chairman of the House Armed Services Committee, said there had been a concerted effort by the previous administration to downplay the effects of caps on defense spending and that now the military feels free to be more open about its serious problems.

In testimony that echoed last year, the vice chiefs told the Armed Services Committee that only three out of 58 of the Army’s total brigade combat teams are immediately ready to fight and 53 percent of Navy aircraft are not ready to fly.

Thornberry and other defense hawks, such as Sen. John McCain, R-Ariz., have raised an alarm on military readiness and pushed for bigger defense budgets, but the effort has been largely thwarted by federal spending caps passed by Congress beginning in 2011. Lawmakers have been unable to reach a deal to repeal the limits designed to force more fiscal restraint on Washington.

But Trump has made a defense buildup one of his top priorities and ordered the Pentagon to come up with a plan that could become the basis for a budget proposal to Congress.

That has raised hopes among lawmakers and the military that the political logjam on Capitol Hill over the caps could finally be broken this year.