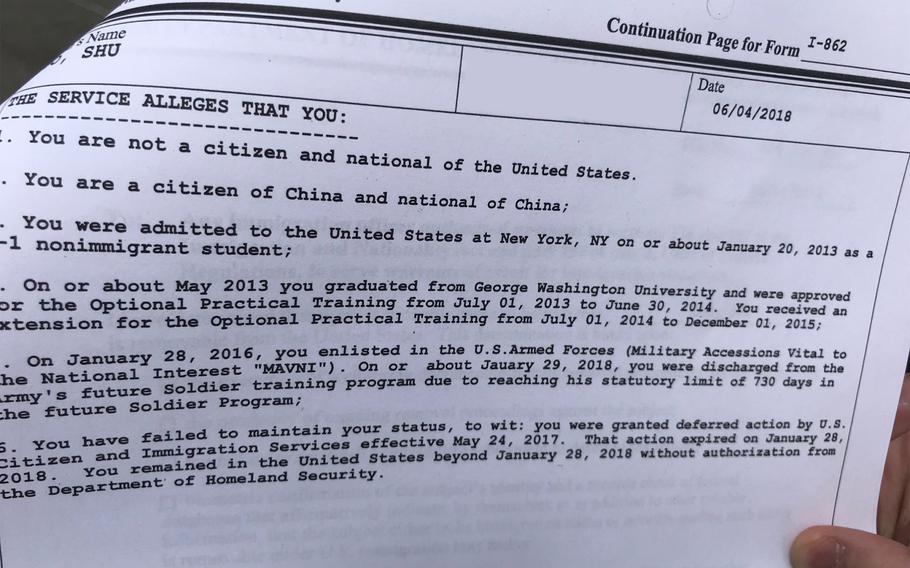 Luo Shu, a Chinese student who joined the U.S. Army in 2016, was processed Monday by the Department of Homeland Security in Newark, N.J. for deportation proceedings after his military contract expired before he could ship off to basic training. His lawyer said an Army administrative error was the cause. (Document supplied by immigration attorney Margaret Stock )

WASHINGTON — Immigration authorities began deportation proceedings Monday against a foreign-born military recruit despite a statement by the defense secretary and a new law aimed at protecting foreign recruits and veterans.

Luo Shu, a Chinese citizen who graduated with a degree in data analytics from George Washington University, was recruited into the Army’s delayed entry program two years ago for his language and professional skills. He was arrested at the Department of Homeland Security Investigations office in Newark, N.J., on Monday after an Army administrative error allowed his service contract to expire before he could pass the Defense Department background checks and ship off to basic training, his lawyer said.

“This is an Army screw-up resulting in him facing deportation,” said Margaret Stock, a retired Army lieutenant colonel who is now an immigration lawyer and is handling Luo’s case.

The case is the first to test the Pentagon’s policy toward active-duty foreign-born recruits who, despite being promised a fast track to citizenship in exchange for signing up, were left exposed to deportation. While their military progression was stalled by administrative delays, their visas expired.

Luo, who has an asylum request pending, is among thousands of recruits in Military Accessions Vital to National Interest program who got caught in this administrative quagmire after the Defense Department instituted enhanced background checks for foreign-born recruits in 2016.

The sheer number of extensive screenings created a years-long backlog that left recruits like Luo in limbo after they signed contracts with the military but had not shipped out to basic training. Other MAVNI soldiers, who were further along in their military progression when the rules changed, were stuck at basic or initial job training.

Defense Secretary Jim Mattis promised that servicemembers who came to the United States illegally as children would not face deportation. Mattis also told reporters that he spoke directly with Homeland Security Secretary Kirstjen Nielsen, who assured him that immigrants serving in the military as well as all honorably discharged veterans with no criminal actions against them are still protected.

But he did not clarify whether recruits whose contract expires before they can actively serve should be protected.

Hoping to protect those recruits, Congress amended the 2018 National Defense Authorization Act late last year to allow the defense secretary to extend the military contract of a servicemember recruited before October 2017 for 365 days. Before that, the defense secretary could not extend a servicemember’s contract for more than 730 days – two years.

Luo should be covered by that law, Stock said.

“It’s unjust to be moving to deport him when Congress passed a law last year that should have resulted in the Army extending his contract,” she said. Stock was one of the creators of the MAVNI program and ran it for several years.

Late last year, ahead of the NDAA amendment, the Army submitted a list of more than 1,000 names of MAVNI recruits to the Board for the Correction of Military Records to extend their contracts. The board approved the list, but Luo’s name was erroneously left off, Stock said.

Luo’s Army contract expired in January, two years after he signed up. He has been frantically seeking to get it extended or renewed since then, Stock said. He asked the Army to add his name to the list, but officials said they could not amend the list. The Army told him he must apply to the corrections board on his own, which he did. But as an individual, a petition to the corrections board can take years.

He also submitted a request to the Secretary of Defense to extend his contract. He was informed that, too, could take up to a year, Stock said.

Luo applied for asylum based on concerns that he would face punishment or retribution in China for serving in the U.S. military, Stock said, noting that the Chinese government has been openly hostile to MAVNIs. “They are viewing MAVNIs as dangerous traitors because they’ve sworn alliegance to the U.S.,” she said. “He’s terrified he will go back and end up in a re-education camp or worse.”

With those processes pending, Luo was summoned to the Homeland Security Investigations office in Newark on Monday for an “interview.” Leaving his wife, a Chinese citizen who is on a legal student visa in the United States, and their American child at home, he went with his lawyer to the Homeland Security Investigations office, where he was formally arrested and fingerprinted.

“You failed to maintain your status, to wit: you were granted deferred action by the U.S Citizen and Immigration Services effective May 24, 2017,” said the charge sheet issue by DHS. “That action expired on January 28, 2018. You remained in the United States beyond January 28, 2018, without authorization from the Department of Homeland Security.”

Stock said she urged authorities to hold off on processing her client based on the circumstances, but the officials refused.

Asked about the case, a spokesman for Immigration and Customs Enforcement, which includes Homeland Security Investigations, said that Luo’s legal student status in the U.S. ran out after Jan. 28, so he was arrested “for violating the terms of his admission to the U.S. as a nonimmigrant F-1 student.”

There was no immediate response about why ICE would not wait for Luo’s petitions to be considered by the Army corrections board and the secretary of defense.

Luo was released after his arrest and ordered to appear in immigration court at a later date.

Requests for comment from Homeland Security, the Army and the Defense Department were not answered in time for publication.