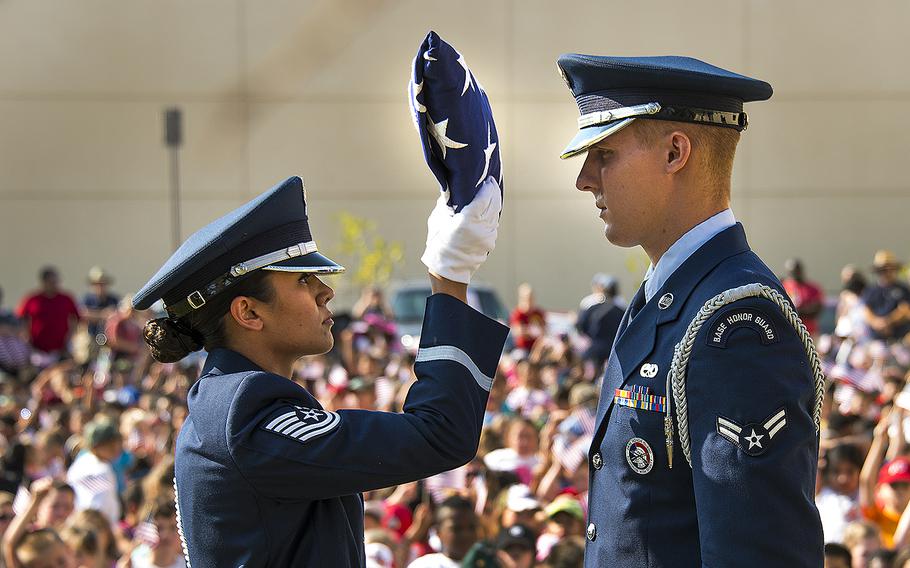 Travis Air Force Base honor guard members perform a flag folding ceremony on Sept. 11, 2015, while a recording of the history of the Stars and Stripes plays in the background. (T.C. Perkins Jr./U.S. Air Force)

Travis Air Force Base honor guard members perform a flag folding ceremony on Sept. 11, 2015, while a recording of the history of the Stars and Stripes plays in the background. (T.C. Perkins Jr./U.S. Air Force) 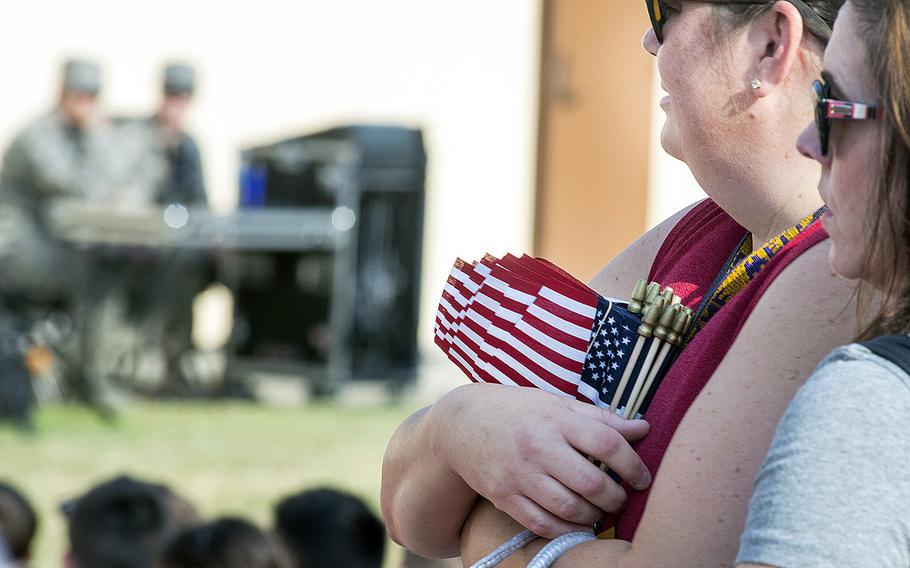 Spectators holding miniature American flags watch as an honor guard at Travis Air Force Base, Calif., perform a flag folding ceremony on Sept. 11, 2015, while a recording of the history of the Stars and Stripes played in the background. (T.C. Perkins Jr./U.S. Air Force)

WASHINGTON — A battle over a flag-folding speech on Travis Air Force Base has raised questions not only about referencing God and prayer in military ceremonies, but also where military control ends and an individual’s rights begin.

On its face, an Air Force regulation revised in 2005 mandates that only the official, religiously neutral script be used at any Air Force flag-folding ceremony where one is given.

But the Air Force on Friday said the regulation is misleading, because it does not distinguish between official ceremonies and informal retirement ceremonies. After military legal advisers interpreted that distinction, the Air Force adopted it.

The incident bubbled up when a lieutenant colonel with the 349th Air Mobility Wing (Reserve) objected to a planned speech during the flag-folding portion of a retirement ceremony for Master Sgt. Charles Roberson. Oscar Rodriguez’ speech, which he has given before, references God and prayer.

When Rodriguez began giving his speech April 3, the officer ordered Rodriguez to be removed from the base auditorium.

The Air Force this week launched an investigation into the events, after the religious freedom organization First Liberty Institute took Rodriguez on as a client and demanded an apology.

That policy differs from Air Force Instruction 34-1201, Section 2.15, which states, “The Air Force developed a script that provides historical perspective on the flag. There are no ceremonies in the Air Force requiring a script be read when the flag is folded. However, when a flag-folding ceremony is desired and conducted by Air Force personnel at any location, on or off an installation, this script is the only one that may be used.”

Mikey Weinstein, of the Military Religious Freedom Foundation, which advocates for religious neutrality, said in a statement that the Air Force interpretation of policy “directly contravenes a decade-old Air Force regulation.”

“The astonishing and embarrassing disparity between the Air Force’s official statement … and the actual controlling Air Force regulation could not be more blatantly apparent!” he said.

Weinstein said on Friday that he is representing 14 Air Force officers, non-commissioned officers and civilians from Travis Air Force Base who object to the new interpretation of the Air Force’s stated policy. He did not identify them.

Stefanek said that military legal advisers issued guidance on the regulation in 2005, and they believed it was not meant to include retirement ceremonies, which are not mandatory -- one of the requirements for an event to be considered official.

Since then, she said, “federal law and Department of Defense policy have, consistent with that guidance, reinforced a servicemember’s right to religious expression.”