Fishing with Johnny: One man's memories of a brother long lost to war 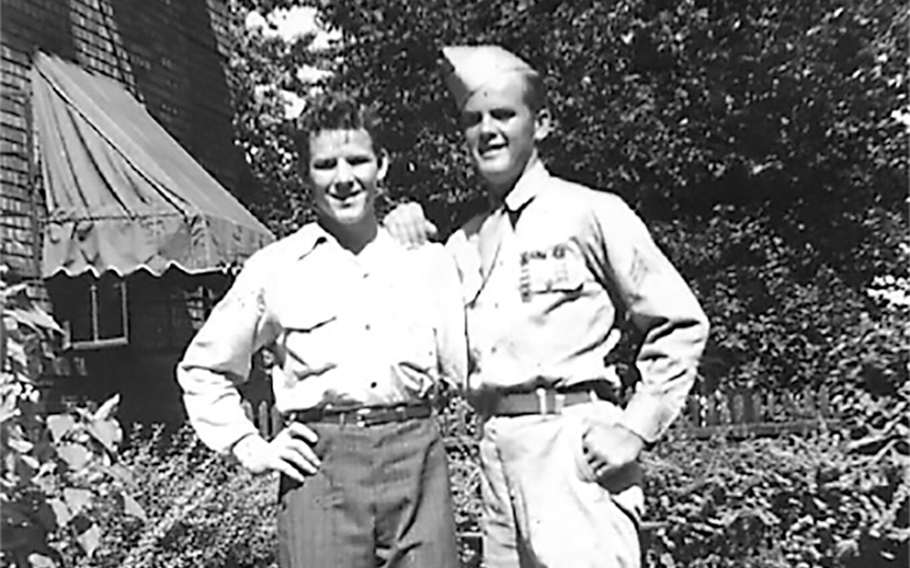 On Dec. 19, 1944, days before Gen. Anthony McAuliffe said “Nuts!” to the Germans in Bastogne, Belgium, the Germans killed my brother.

I lost my fishing buddy, who was my best friend. Johnny was a paratrooper in the 101st Airborne Division, two years older than me but not yet 21 when he died. At that time I was on board a Landing Craft Tank in the Mediterranean.

We had returned to Palermo after the invasion of southern France. Communication was by V-mail (victory mail) and letters were often months late, but his message was uplifting at times when my spirit was being hammered. Johnny made fun of me for “floating around in bathtubs.” I said it was idiotic to jump out of perfectly good airplanes. Often he would ask me if I had learned anything about China.

Johnny had a craze about China. He knew about the Boxer Rebellion and the Opium Wars. When we were young he would get a world map and show me the Great Wall and the Yangtze and Yellow rivers. He said there were more Chinese than any other nationality. I knew Johnny was the smartest brother in the world.

I could find fishing worms by digging near the creek, where the cows grazed, and catch crawfish before the raccoons got to them. When we went fishing I always caught the biggest fish.

He used his knowledge against me all the time. When I shot the first squirrel he’d asked me a question about China to show me I wasn’t so smart. When I held my breath underwater longer than him, he’d ask me what years the Han Dynasty ruled China. He would smile when I didn’t know the answer.

There’s a distinct advantage to being smart. You get to decide things. Like wolves, my brother and I established a pecking order early. When Johnny was a cowboy I had to be an Indian and be killed. When he was a general I had to be a buck private. That did not bother me because I had the greatest general in the world. I understood that when we grew up he would be the sheriff and I would be his deputy, which was OK with me.

Johnny was smart. He received two double promotions (in school). By the time I was a freshman he had graduated and was in the Army. I saw him in uniform one time. Then he was gone … forever.

In spite of rugged times during the Great Depression, our future seemed assured until the smart half of our team was killed in the Battle of the Bulge.

My brother and I made youthful plans during the middle-1930s, in a coal-mining town in Indiana, during the time when the union kept miners out on strikes until there was little money for food. The Great Depression was in full swing. Johnny had talent for innovation that emerged in our life when it was needed most, which permitted us to survive even in tough times.

By the time I was 8 and Johnny was 10 we helped in our grandfather’s garden and raided the woods for black walnuts and hickory nuts, with mushrooms in the spring and hazelnuts and blackberries in the fall. We’d set box traps that produced rabbits all year long. Frequently we cleaned a rabbit and sold it to a teacher, who was one of the few people who had money. We could buy more rifle shells. We gigged frogs in sloughs and seined turtles and fish in creeks and ponds.

After the plowing was done, we could saddle up horses and go into the woods and live off the land, day and night, for a couple of weeks. We took fishing-poles and .22 caliber rifles. We lived on fish and squirrel and sometime we stole a watermelon and ears of corn from a nearby farm. We cooked our meals in an old, rusty galvanized bucket.

We climbed gnarled vines tangled up high in the canopy and gave Tarzan’s yell as we swung out over the creek and let go, plunging buck naked into the swimming hole. We chased phantom alligators. We slept covered with dried grass and leaves.

Liberty Magazine was a major publication when we were young.

Johnny read where a leather dealer in Terre Haute wanted to buy furs and hides. We knew where muskrats and foxes could be caught. We knew about beaver dams. We knew where bobcats hunted. We stayed away from the swamp, said to be the home of a panther although only the town drunk had seen it. The rest of us heard scary screams sometimes at night.

We hitchhiked to Terre Haute and spoke with the skin merchant. He sold us some traps and taught us how to set them. By the time I was 10 we were checking traps every morning before school. We got a quarter for a muskrat pelt and a dollar for a beaver. If we got a mink it was worth $3. Johnny took care of the money, explaining that he was our accountant even though I wasn’t sure what that meant.

Maybe our trapping and hunting together, when we were young, was the reason I devoted 50 years in the fur business. Over the years when cutting and sewing a fur garment, I would pretend my brother was helping me. Invariably, I would create a beautifully styled garment.

Sometimes, late at night, when memories flood in unannounced, I get up and get the box from a shelf in my office and take out two Bronze Stars and two Purple Hearts. I polish them. I read the letter from President Franklin Roosevelt and I feel the “Screaming Eagles” patches. I study the picture of his youthful face and I wonder if he knew his death was imminent and if he felt lingering pain. With my eyes blurred I put his memorabilia back into the box. I go back to bed and stare at nothing with tears running down my cheeks and dawn still long hours away.

I still spent time fishing, with less enthusiasm. The pain was always there. Sometimes, I would feel a close presence and often an unexplained question would pop into my mind, like, ‘What is the capitol of Mongolia?’ I would think for a time and find myself saying that I didn’t give a darn about Mongolia. Then it was hard to tie on my hooks with misted vision.

I retired in 1991 at the age of 64. It occurred to me that my brother would have been 66 and perhaps president of the United States, although Johnny always seemed a lot smarter than that. More than likely he would have headed up some university. I decided to take up fishing and write stories about my experience. Instead of bass and catfish I often spend time in the Canadian wilderness catching pike, trout, char and muskellunge.

On my vacation one year I went to an isolated river in western Ontario. It is the home of muskie in sizes that will make you stare in disbelief. I caught six muskies, including three at over 30 pounds. I knew Johnny would have been proud of me.

Sleep was elusive my last night there. I took a canoe and paddled a few miles upriver. I lifted my oar and drifted. The silence was peaceful. I thought about how our plans had been altered and how reality was so different than our teenage dreams. I lay on my back gazing at the heavenly panorama in the sky, which my brother had explained to me 50-some years ago.

The Big Dipper was still there. The moon was bright and looked the same. Even though I could not see it, I remembered Johnny explaining that Halley’s Comet would travel back around about now. The spectrum was like a dome of precious jewels reaching from horizon to horizon and maybe to infinity. I figured Johnny knew I was there, wishing he were with me.

Echoing across the tundra, I heard the howling of timberwolves possibly foretelling the death of an elk or another of wildlife’s wonders. A snowy owl on silent wings ghosted low between the moon and me. Loons exchanged haunting messages upriver. A swirling bank of mist suddenly enveloped my canoe.

I drifted off to sleep. In the darkness Johnny came out of the vapor and into the canoe with me. Our embrace was long. I wanted it never to end. I felt the love and respect I had for him from a long time ago. I held a hand that I had not held in 50 years. I saw the same grin and blue eyes I had looked into with awe as we became teenagers. He asked me if I knew anything about China.

I explained that China had a land mass of 3,691,500 square miles, including Taiwan and Tibet. I told Johnny that the population was well over a billion and that they were from Tungus, Chinese, Mongolian and Turkish ethnic origins. I said their capitol was Beijing, and that Shanghai had 12 million inhabitants. I wanted so desperately to impress my brother that details just kept gushing out.

He stopped me and said. “I’ll be darned, my little brother finally got even with me, didn’t you?” I told him I had attended college because I wanted to be as smart as him.

My finest muskie rod, with the tip bouncing, appeared in his hands. He was engaged with an enormous fish. I watched the scene unfold. He was a master angler, practicing the art of catching a trophy fish. He lifted the muskie into the boat. It had to be a record. He smiled that same crooked grin I recalled from our youth.

“You were right, little brother,” Johnny said. “China isn’t that important. Catching the biggest fish is what counts.”

I smiled, “I’ll be darned. You just had to get even again didn’t you?” He said he learned the technique so he could catch a fish bigger than mine.

I awakened with the sun coming over the top of the trees and felt a kink in my neck. I glanced across the river and realized I was alone. I couldn’t explain the feeling that came over me but I knew, somehow, I had been fishing with Johnny again.

Mist swirled near my canoe. I spoke aloud to a vaguely discernable figure. I thanked him for fishing with me. I said I wanted him to go with me again, soon. Slowly, very slowly, my brother faded away into the morning fog.

For some moments I had to keep my eyes tightly closed to hold back 60 years of pent-up emotions. After a while, I discovered it wasn’t possible. The dike ruptured.

I returned to the lodge to the aroma of bacon. I was hungrier than I had been in six decades.

Email Bill York, who writes for the Gwinnett Citizen, at sioux2222@gmail.com