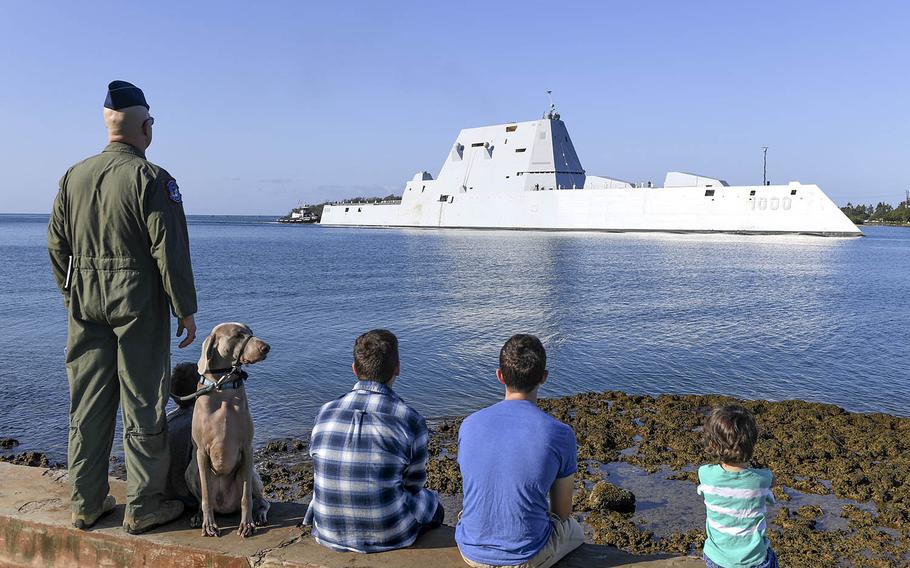 The guided-missile destroyer USS Zumwalt sails through the harbor as it arrives at Joint Base Pearl Harbor-Hickam, Hawaii, Tuesday, April 2, 2019. (Holly Herline/U.S. Navy)

The guided-missile destroyer USS Zumwalt sails through the harbor as it arrives at Joint Base Pearl Harbor-Hickam, Hawaii, Tuesday, April 2, 2019. (Holly Herline/U.S. Navy) 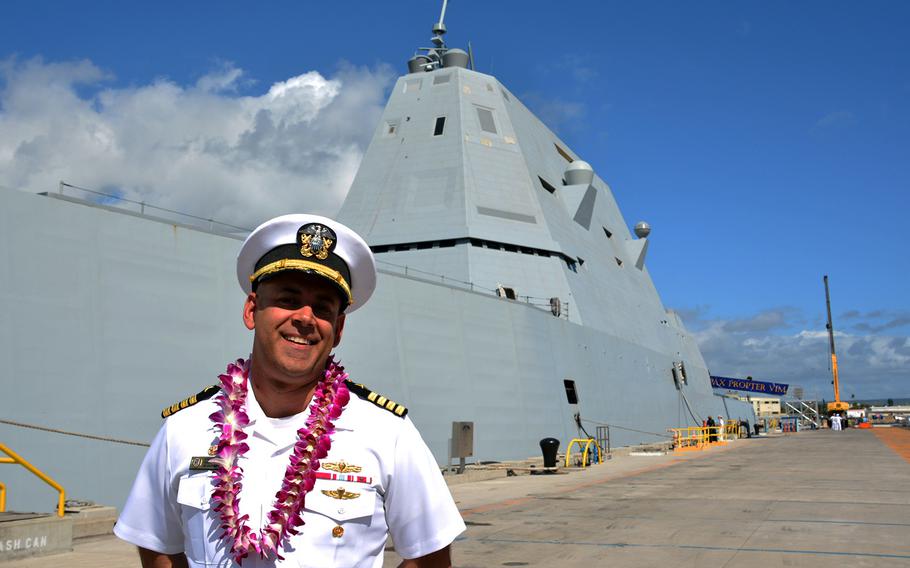 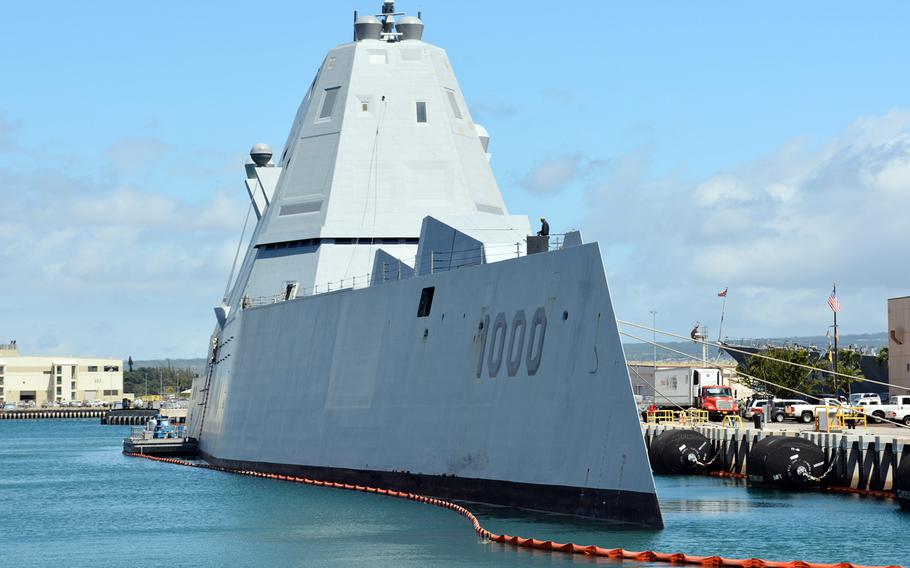 Buy Photo
The guided-missile destroyer USS Zumwalt moored at Joint Base Pearl Harbor-Hickam, Hawaii, where it arrived April 2, 2019, for testing in nearby waters. (Wyatt Olson/Stars and Stripes)

JOINT BASE PEARL HARBOR-HICKAM, Hawaii — The first of the Navy’s newest generation of guided-missile destroyers — and its most controversial — arrived Tuesday in Hawaii for a series of tests in surrounding waters.

The USS Zumwalt looks like no other ship in the fleet, with a sleek design made to fool enemy radar. The sides of its “tumblehome” hull slope inward above the waterline, while below water the hull expands outward.

Homeported in San Diego, the Zumwalt recently made stops in Canada and Alaska. Hawaii is a “critical training and testing area for the Navy” where the Zumwalt would “conduct important at-sea evolutions that enhance our crew’s warfighting skills,” Carlson said

For the sake of “operational unpredictability,” Carlson said he was not at liberty to say how long the ship would be in Hawaii nor where it would be headed next.

“I can say that we’ll be in the Hawaiian area for a little while, and then just working around the Pacific,” he said. “Part of what we need to do is just be present in the Pacific and let folks know that the Zumwalt and the capabilities she brings are available as we get through the testing and delivery phases that we need for the ship.”

The Navy itself, however, has had a hard time deciding how this new generation of destroyer should be equipped and used — or even how many it wants. As the price tag per ship grew since 2005, the Navy’s original plan to buy 32 Zumwalt-class destroyers dwindled to just three. The USS Michael Monsoor was commissioned in January, while the third, the USS Lyndon B. Johnson, was launched in December in Maine.

The Project on Government Oversight, a nonpartisan, independent watchdog group based in Washington, D.C., published a blistering analysis in January on the history of the Zumwalt-class destroyers.

“The ships represent an object lesson in the risk of trying to cram nearly a dozen new technologies into a warship, most of which failed to get out of port,” wrote Mark Thomson, POGO’s national security analyst. “The bottom line: American taxpayers have bought a fleet of three warships — at a cost of $8 billion each! — that are still looking for a mission.”

Congress, unsatisfied with the progress of new destroyers, recently ordered the Navy to strike the Zumwalt and Michael Monsoor from its roster of combat-ready vessels.

Among the weapons built into the Zumwalt-class ships is the Advanced Gun System, which fires precision-guided, 155-mm projectiles. But by early last year the cost of those projectiles was approaching $1 million each — almost as much as one of each ship’s Tomahawk missiles.

The Navy announced that the Advanced Gun System would remain on the ships but in “inactive status” until a cheaper projectile could be developed.

“Bottom line: The Navy is buying guns and $8 billion holsters to hold them but has decided not to buy any bullets for them,” Thomson wrote.

Carlson, however, was nothing but enthusiastic about the USS Zumwalt.

“Any of those missions are part and parcel of what Zumwalt does,” he said. “The difference is the capacity and capability and some of the automation we have just means we do it in a little bit different manner.”

Petty Officer 1st Class Tim Luckritz, in charge of the ship’s weapons systems, is among the longest serving of the 150 crew members.

“I’ve been here for the construction of the ship, commissioning of the ship, all our certifications,” he said.

“The Zumwalt represents such a significant step forward,” he said. “I would compare it to the transition from sail to steam, in terms of the automation, the technology involved and all the new technology we’ve got on board the ship.”

The ship’s stealthy design would help it ease into deadly close range of a target.

“We weigh 60,000 tons, but we look like a small fishing boat on the radar,” said Lt. j.g. Dmitriy Voznyak, who led reporters on a tour of the ship, where photos were not allowed.

The 610-foot-long Zumwalt has a helicopter landing pad in the rear, with a hangar big enough for two of them. It uses a Peripheral Vertical Launch System around its gunwale for its missile launch rather than using centralized magazines.

Officially, the Zumwalt is still in its test-and-evaluation phase and not operationally deployed, Carlson said.

But there are sailors on board, he quickly added, “so we’re operating.”