First lady: Most Americans not connected to military community 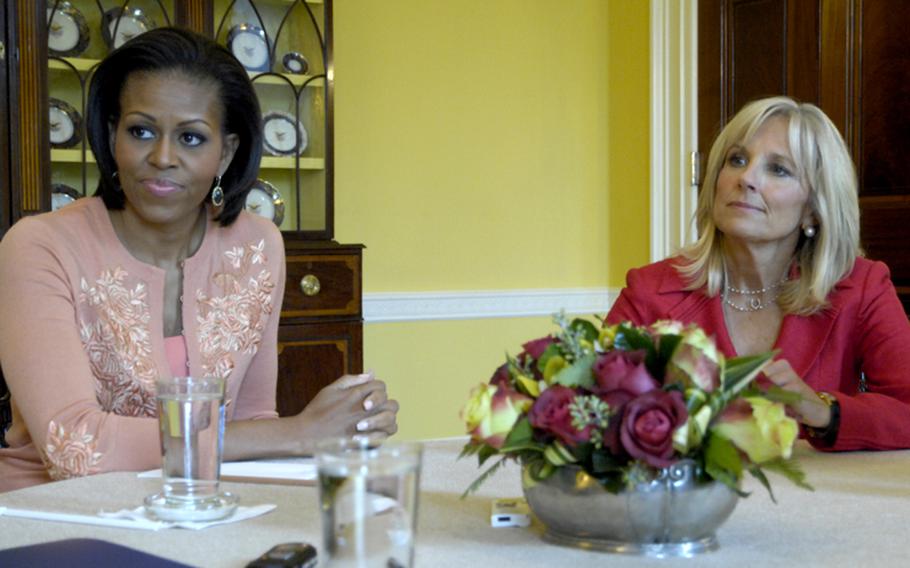 WASHINGTON &mdash; First lady Michelle Obama said she has talked to military spouses who&rsquo;ve broken down in tears simply because they feel no one understands their world.

&ldquo;Still most Americans don&rsquo;t have a connection to the military community,&rdquo; she said during an interview with Stars and Stripes on Tuesday. &ldquo;This is a group of individuals who give so much and don&rsquo;t want to fall into the shadows. They want to know they live in a country that cares about what they do.&rdquo;

Earlier in the day, she and Jill Biden &ndash; along with the president and vice president &ndash; unveiled their new Joining Forces campaign, designed to persuade corporations and all Americans to find ways to help military families confront the challenges created by years of warfighting.

It was the second time in four months that the two announced a major military families initiative.

Obama and Biden said the new campaign doesn&rsquo;t replace those efforts, but acknowledges that broader support from the entire country is needed to reach out to military families and offer them the respect they deserve.

&ldquo;They just want to feel recognized,&rdquo; the first lady said. &ldquo;They want to know that the rest of the country knows we&rsquo;re out there.&rdquo;

The focus isn&rsquo;t new for either woman. Both made military family issues a point of emphasis during the 2008 election, and both have made numerous trips to military bases over the last two years, meeting with military spouses about their employment, education and quality-of-life needs.

But a 2010 survey by Blue Star Families found that 92 percent of military spouses and children feel that the general public does not understand or appreciate their sacrifices. And both Obama and Biden acknowledged the significant disconnect between the American public and the small percentage of families with loved ones in the military.

Biden, whose son Beau is a National Guardsman, said families of guardsmen and reservists are among the most vulnerable, since they face the same increased deployment tempo as their active-duty peers but don&rsquo;t have the support structure that exists on military bases.

Obama said too few non-military families know how to help or even where to find their military neighbors.

&ldquo;It&rsquo;s not that the country doesn&rsquo;t care,&rdquo; she said. &ldquo;People respond to these stories if they hear them, if they know them. I didn&rsquo;t know them. So if we can keep the light shining on their lives, people will hear it.&rdquo;