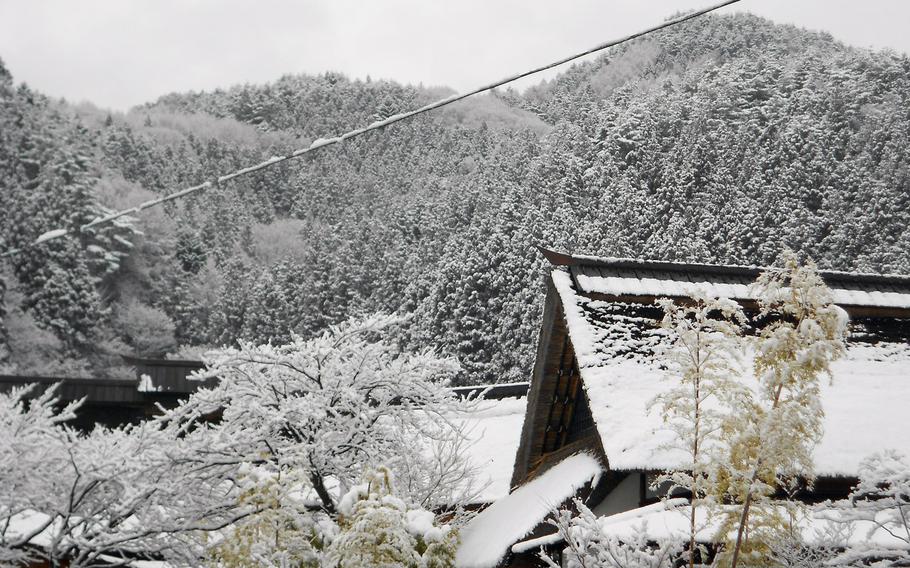 Buy Photo
Kawaba City is a farm village but there are plenty of hotels and onsen (hot springs) where skiers can rest after a hard day on the mountain. (Seth Robson/Stars and Stripes)

Buy Photo
Kawaba City is a farm village but there are plenty of hotels and onsen (hot springs) where skiers can rest after a hard day on the mountain. (Seth Robson/Stars and Stripes) 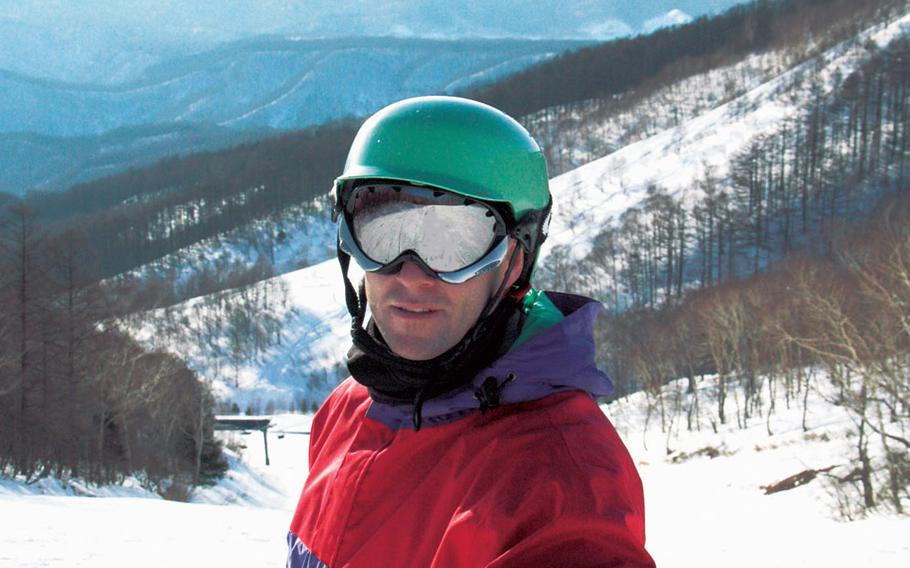 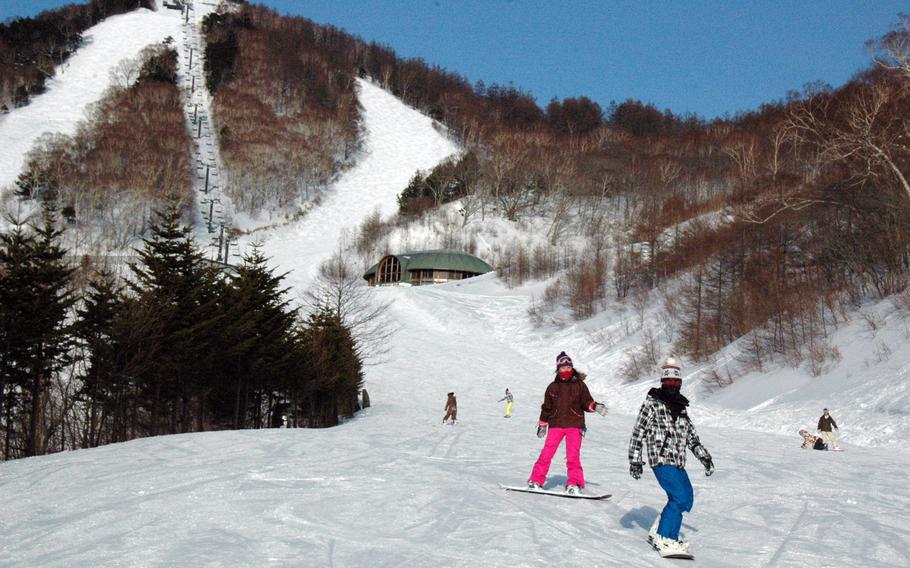 Buy Photo
If you are a novice snowboarder, you will be in good company at Kawaba. About 80 percent of the almost exclusively Japanese clientele are intermediate level snowboarders taking advantage of the gentle slopes and moderately challenging terrain features scattered throughout the resort. (Seth Robson/Stars and Stripes) 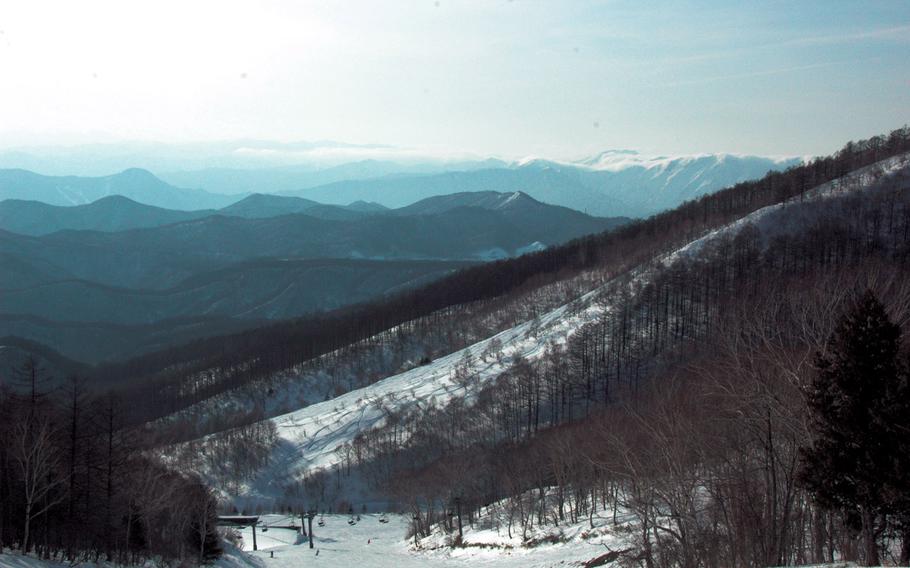 Buy Photo
Views of the Japanese mountains from Kawaba Ski Resort are stunning on a sunny day. (Seth Robson/Stars and Stripes)

There is no evidence that snow monkeys have tried to ski or snowboard, despite the fact that they live in the perfect place to participate in alpine sports.

It appears they lack the desire (and equipment) needed to join the powder hounds that arrive in the Japanese mountains each winter.

A full account of ski areas that can be reached for a day or weekend trip from Tokyo would fill a large book. However, here are a few worth pondering.

Naeba The home of the Fuji Rock music festival in summer, Naeba Ski Resort in Niigata Prefecture is only 120 miles from Tokyo and easily accessible by train and bus.

The massive resort on the slopes of Mount Takenoko was built during Japan’s boom times and has a 1990s vibe to it. At the foot of the mountain, the 1,299-room Naeba Prince Hotel greets skiers, who can relax in one of dozens of restaurants before they hit the slopes.

The lower part of the mountain is where most people will have their fun. It’s got plenty of wide, groomed slopes that are suitable for beginners. If you want to practice tricks, there’s challenging terrain at one end of the valley. There are also plenty of places to sit and have a drink in the sun.

The alpine views are slightly spoiled by the resort’s lack of charm (most of the buildings just look like gray, concrete boxes) and massive power pylons.

Those in search of adventure can board a gondola to head up to the top of the mountain — almost 3,000 feet above the valley floor.

most fun for off-piste skiers who, if they are willing to scoot under a rope, can carve lines through a sparse forest before dropping into a deep bowl and finding their way back to the lift.

The most skilled powder hounds can have fun going all the way to the valley directly under the gondola, although they’ll have to watch out for some rather dense trees.

Skiing in the trees at Naeba has its rewards (untracked snow), but those who stray too far from the piste risk dropping into gullies that will force them to make long and tiring slogs through deep snow to reach the valley floor.

Mount Norikura This ski resort in Nagano Prefecture is a little farther afield for Tokyo residents, but it’s possible to get there on a bus or by car within four hours.

It’s much lower key than a massive resort like Naeba and offers the added benefit of natural onsen (hot springs) to sooth skiers’ aching bones after a hard day on the mountain.

Many skiers drive part way up the mountain to park their cars, but the road can be slippery and traffic sometimes backs up when vehicles get stuck. A better option, if you are staying at a nearby hotel, is simply to walk to the lowest lift, which is within about 500 yards of most of the accommodations.

Many of the runs on Mount Norikura are long and flat.

Experienced skiers might find the on-piste skiing a little dull, but it’s perfect for beginners or kids.

The best option for thrill seekers might be to head over to one of three challenging terrain parks, some of which feature quite large jumps along with rails and quarter pipes.

The mountain has its fair share of back-country skiers, who can be seen heading higher above the top lift on cross-country skis.

There are some large restaurants with excellent menus part way up the mountain, but it’s also nice to stop at the lowest lift — an area that has a sort of European feel to it and plenty of hot coffee available.

Après-ski at Norikura involves trudging down the road to the local onsen, which include scenic outdoor hot pools.

Those who go there to ski might consider returning in summer. The resort is a mecca for various other outdoor pursuits, from climbing to mountain biking.

Kawaba A two-hour drive from Tokyo, this family-friendly ski area has enough challenging terrain and off-piste powder to interest skiers and snowboarders of all abilities.

You know you are in Kawaba when you start seeing pictures of ringo (apples) outside shops. The valley leading to the ski area is planted with numerous orchards, and the local vending machines are filled with cans of apple juice rather than Coke.

Getting up to the ski lifts involves a challenging ascent along a winding, often snow-covered road that’s slippery enough to make chains or snow tires mandatory. At the top there’s a large gray, seven-story concrete parking garage that, like most structures at Japanese ski resorts, looks like it could have been designed in North Korea.

Inside it’s a different story. There are comfortable rest rooms, changing areas and lockers on every level and elevators that ferry guests to the ski area. The top two floors include plenty of colorful shops and restaurants as well as a gear rental store.

Those with very small children can take them right outside to frolic in a kids’ snow park.

If you are a novice snowboarder, you will be in good company at Kawaba. About 80 percent of the almost exclusively Japanese clientele there are intermediate-level snowboarders taking advantage of the gentle slopes and moderately challenging terrain features scattered throughout the resort.

The ski area itself includes five chair lifts including two quad lifts with padded seats and plastic wind shields along with several more basic lifts. The most popular lift is the second quad-chair, which takes skiers toward the 6,627-foot summit of Mt. Kengamine.

The views from the top look best after a blizzard, when the pines and deciduous trees dotting the mountain are covered in snow.

The layout at Kawaba is great if you are skiing with friends of differing abilities since all of the courses — on and off-piste — funnel toward Magic Valley, so it’s easy to meet up at the bottom of various lifts.

For those interested in lunch, there are two restaurants near Magic Valley and another very large restaurant on the top floor of the car park. All serve hearty Japanese food, such as ramen noodles, that provide plenty of calories to expend on the slopes.