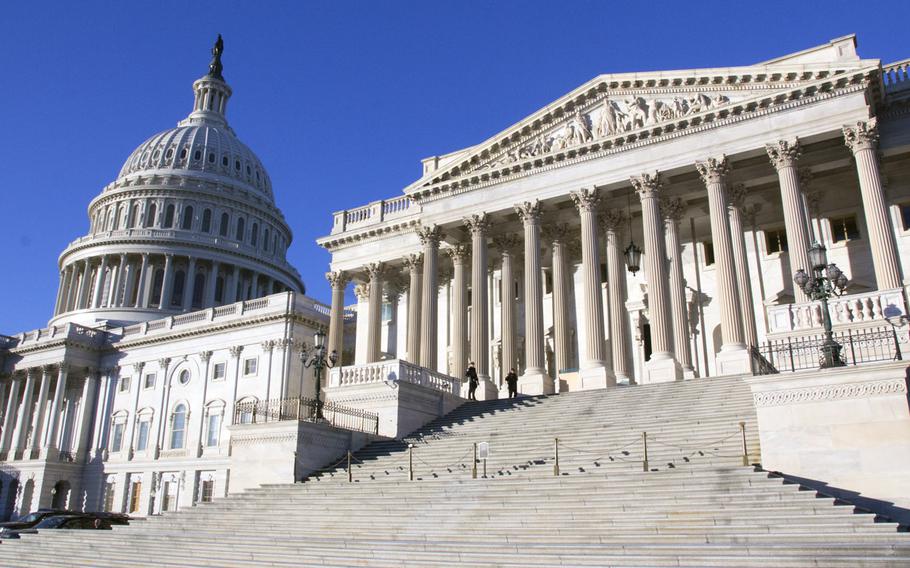 The U.S. Senate side of the Capitol. (Stars and Stripes)

WASHINGTON — The Senate moved toward final approval to the annual defense authorization bill on Wednesday, voting 71-29 to end debate on a stripped-down version of the military funding measure.

The $607 billion legislation still comes in at more than 1,000 pages, and includes a 1 percent pay raise for troops starting next month, a host of specialty pay and bonus renewals, and more than 30 other changes to how sexual assault crimes are handled by the military.

It does not include a massive overhaul of the military justice system to remove command authorities from sexual assault prosecutions, a proposal that dominated debate on the bill throughout the year.

A final vote on the bill was expected late Thursday. Several Republican senators had objected to Wednesday’s procedural move to advance the bill, noting the rushed process omitted a meaningful amendment process.

On Thursday morning, supporters hailed the expected passage as a victory for Congress, considering the small number of significant bills passed by lawmakers this year.

A day earlier, the Senate finalized a new budget compromise plan designed to avoid another government shutdown next month and “bring sanity back” to the legislative process, according to Senate Majority Leader Harry Reid, D-Nev.

When it passes, the defense authorization bill will boast 52 consecutive years of being signed into law, by far the longest streak of bipartisan cooperation in Congress. Republican and Democratic lawmakers lamented lost opportunities with the rushed bill, but said assuring stability for military operations and families was too important to risk another political stalemate.

The measure provides $80 billion for military overseas missions in fiscal 2014 and includes plans for dozens of routine reports and reviews.

It will ease rules on transferring prisoners held at U.S. Naval Station Guantanamo Bay to foreign countries but block any White House plans to transfer those detainees to a new American facility.

On the issue of sexual assault, the legislation would provide more legal protection and assistance for accusers, strip commander’s ability to overturn guilty verdicts, establish minimum sentences for troops convicted of those crimes, and allow victims to transfer out of their units.

The House approved the authorization bill last week. The president is expected to sign the measure into law before the end of the year.