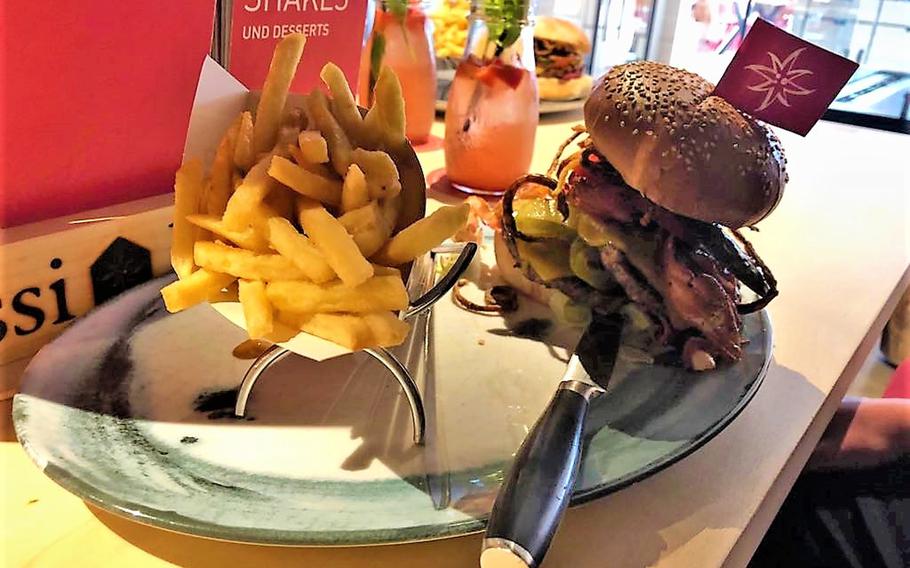 Buy Photo
A massive burger known as the Karl de Grosse is served for lunch at Sissi und Franz restaurant in Kaiserslautern, Germany. The burgers start at just under eight euros apiece, a departure from the low-priced McDonald's the building formerly housed. (Gregory Broome/Stars and Stripes)

Buy Photo
A massive burger known as the Karl de Grosse is served for lunch at Sissi und Franz restaurant in Kaiserslautern, Germany. The burgers start at just under eight euros apiece, a departure from the low-priced McDonald's the building formerly housed. (Gregory Broome/Stars and Stripes) 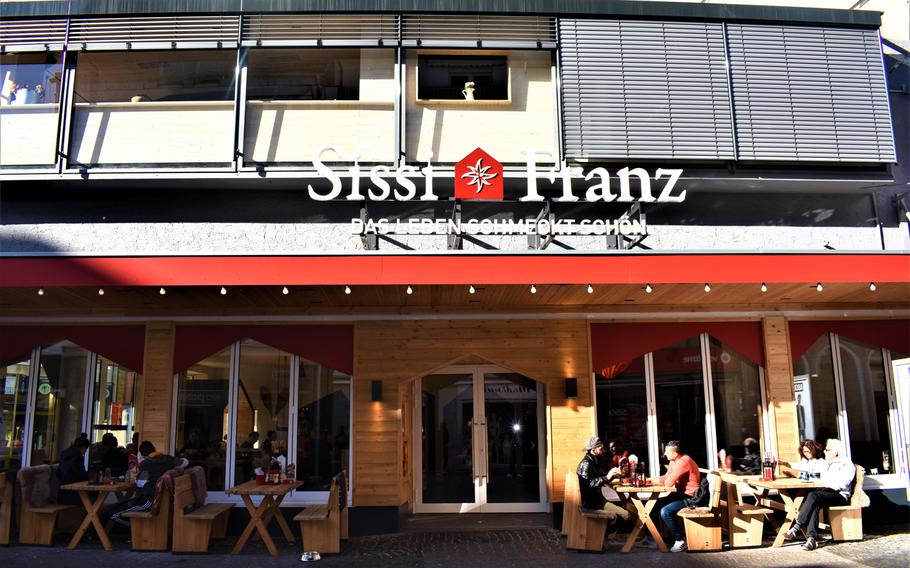 Buy Photo
Sissi und Franz, a new burger restaurant in downtown Kaiserslautern, Germany, occupies the location of the former two-story McDonald's that was a signature feature of the city's pedestrian zone. (Gregory Broome/Stars and Stripes) 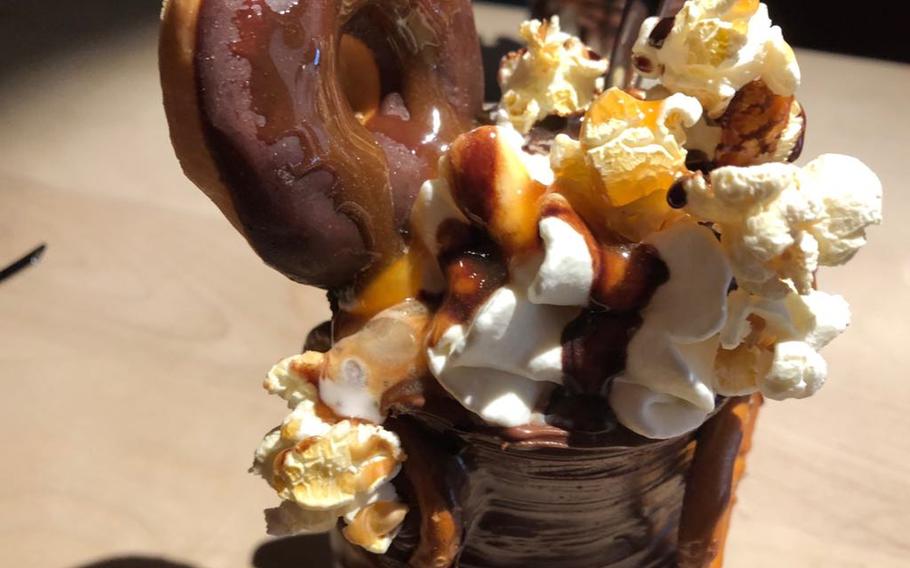 Buy Photo
A milkshake named the Ludwigshohe is served at Franz und Sissi restaurant in Kaiserslautern, Germany. The shake, featuring popcorn, pretzels and a donut, is one of many decadent desserts served at the eatery. (Gregory Broome/Stars and Stripes) 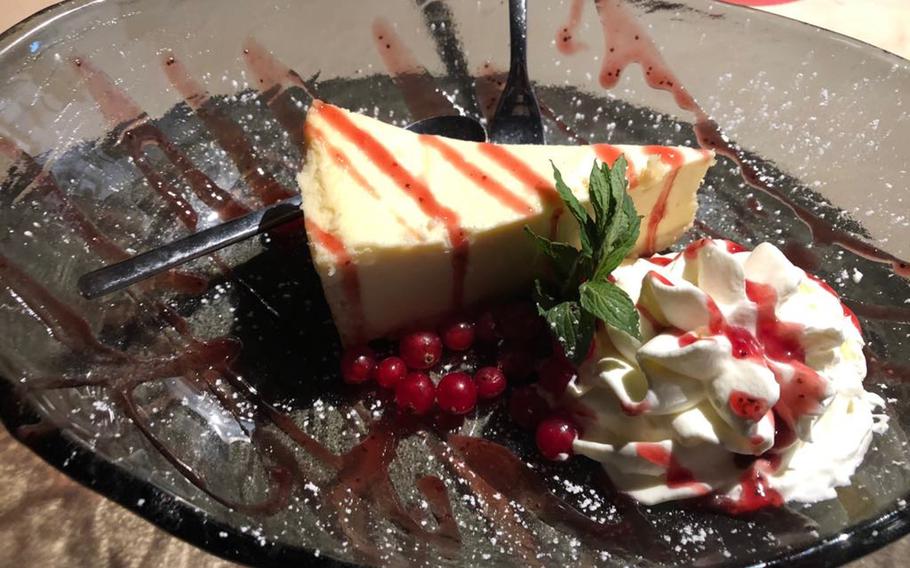 Buy Photo
A cheesecake dessert known as the Traumhafte Gisela is served at Sissi und Franz burger restaurant in Kaiserslautern, Germany. At under four euros, the item is one of the lower-priced dessert alternatives to the restaurant's signature shakes, which cost twice as much. (Gregory Broome/Stars and Stripes) 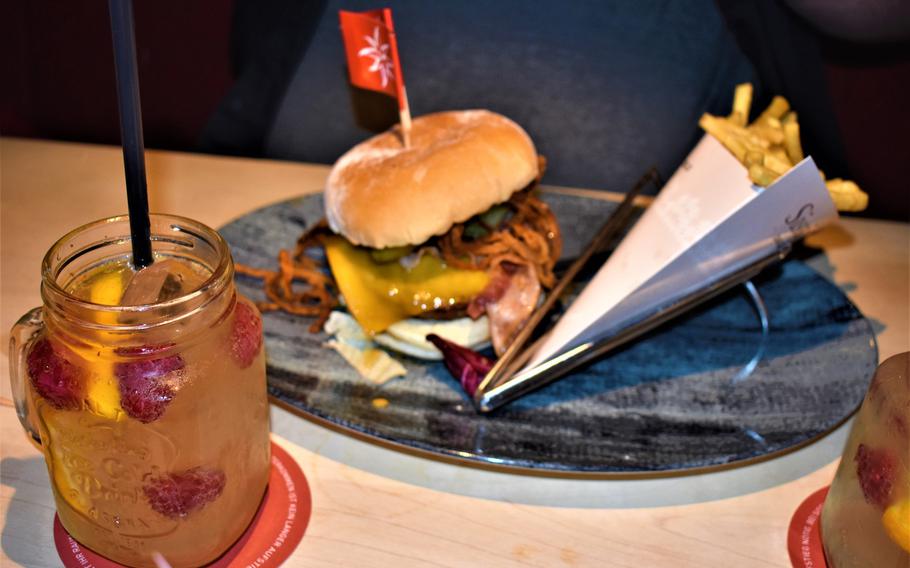 Buy Photo
A bacon cheeseburger known as the Joseph is presented along with a side of fries and an Orange Berry detox water at Franz und Sissi restaurant in Kaiserslautern, Germany. The restaurant offers a lunch special adding fries and a specialty drink for 3.95 euros above a burger's menu price. (Gregory Broome/Stars and Stripes)

Before we consider the debut of Kaiserslautern’s newest burger restaurant, Sissi und Franz, let’s take a moment to remember what once was.

The McDonald’s restaurant on the corner of Eisenbahnstrasse and Marktstrasse was nothing less than a civic institution before its sudden and recent closure. The palatial two-story location lorded over its corner of downtown, luring customers in from the steady flows of pedestrian foot traffic and one-way vehicle traffic that crisscrossed its storefront.

Cozy diners munching fries and sipping straws behind the second-floor glass looked positively aspirational to the less-fortunate souls beating their feet, pushing their pedals and gripping their wheels below, particularly when the weather turned cold. It stung when this majestic outlet of the Golden Arches was reduced to plywood and scaffolding.

It’s into this semi-sacred space that Sissi und Franz has launched its own brand of burger establishment. McDonald’s has found mixed results in recent years with its efforts to modernize its restaurants with sleeker dining rooms, gourmet menu options and an emphasis on expensive coffees. While the world’s largest burger chain is merely adopting that kind of haughty pretentiousness, Sissi und Franz was born into it, molded by it; the place dabbles with an Alpine ski lodge theme that is not fully realized, is named after old Austrian royalty, is unabashed about charging 8 euros for a milkshake and sells something called detox water with stuff like raspberries and basil sloshing about.

This all clashes with my own purist sensibilities, developed over years of eating burgers and announcing immediate and reactionary opinions, solicited or otherwise, on same. I’m happiest with a burger wrapped in foil or paper and shoved across a counter either on a plastic tray or in a greasy paper bag. A burger served with too much flair or presentation strikes me as manipulative. It’s lipstick on a cow.

Sissi und Franz’s take on milkshakes furthered this impression. These desserts are served piled with all kinds of whimsical treats — doughnuts, gummies, popcorn, pretzels, chocolate sauce caked on the sides, etc. — but the shake underpinning all that is a little thin. While it made for a cool photo, I’d have preferred a more substantial vanilla shake with nothing protruding from it but a straw. I’m a bit embarrassed to say that my sweet tooth was not satisfied by a milkshake with a doughnut on top, but I am nonetheless saying just that.

I’ll admit that it’s possible my emotional entanglements are such that no successor could live up to my idealized memories of the fallen McDonald’s. It’s not the fault of Sissi und Franz that their building makes me melancholy. I just wish I’d liked the new eatery enough to begin the healing process.

HOURS: Open daily at 11 a.m.; closes at 1 a.m. Friday and Saturday and midnight all other nights.

PRICES: Burgers start at 7.45 euros ($8.38); fries start at 3.45. A lunch combo special adds fries and a detox water or lemonade for the price of the burger plus 3.95 euros. Milkshakes start at 7.95 euros; waffles, cheesecakes and other desserts start at 2.95 euros.