Family thankful for medical innovation and for a soldier's survival 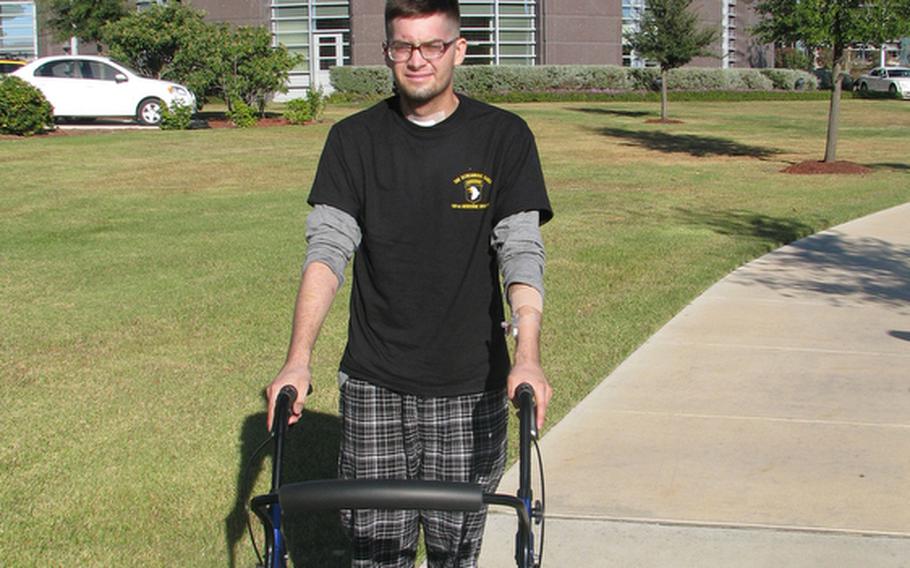 Pvt. Eric Griego, who had his lung removed after he was shot in the chest while serving in Afghanistan, is now able to walk with the help of a walker. None of Griego&#39;s doctors has been able to say what physical limitations he might face later in life, except to say he will likely feel winded because he has a lot less lung tissue. (Courtesy of the Griego family)

Pvt. Eric Griego, who had his lung removed after he was shot in the chest while serving in Afghanistan, is now able to walk with the help of a walker. None of Griego&#39;s doctors has been able to say what physical limitations he might face later in life, except to say he will likely feel winded because he has a lot less lung tissue. (Courtesy of the Griego family) 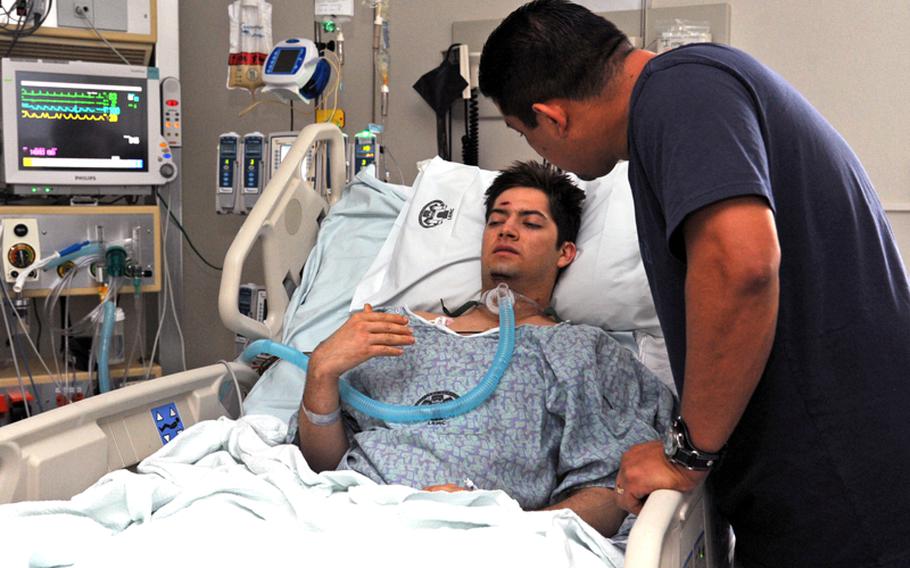 Buy Photo
Pvt. Eric Griego talks to his dad Peter in the intensive care ward at Landstuhl Regional Medical Center on Nov. 9. Griego, 22, wounded in Afghanistan, was the first soldier to be flown from a combat zone while being treated with a portable heart-lung machine, known as an extracorporeal membrane oxygenation, or ECMO, machine. (Michael Abrams/Stars and Stripes) 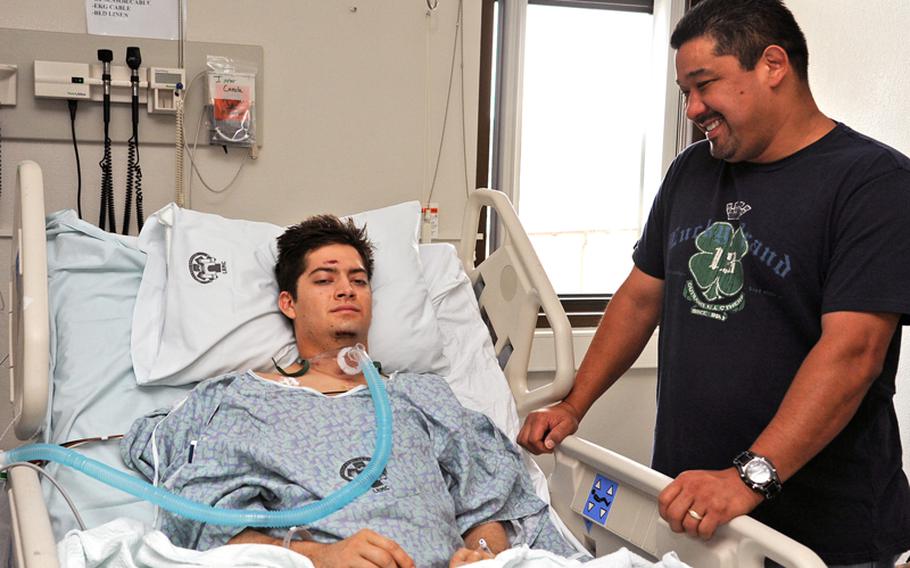 Buy Photo
Pvt. Eric Griego gets a visit from his dad Peter in the intensive care ward at Landstuhl Regional Medical Center on Nov. 9. Griego, 22, wounded in Afghanistan, was the first soldier to be flown from a combat zone while being treated with a portable heart-lung machine, known as an extracorporeal membrane oxygenation, or ECMO, machine. (Michael Abrams/Stars and Stripes) 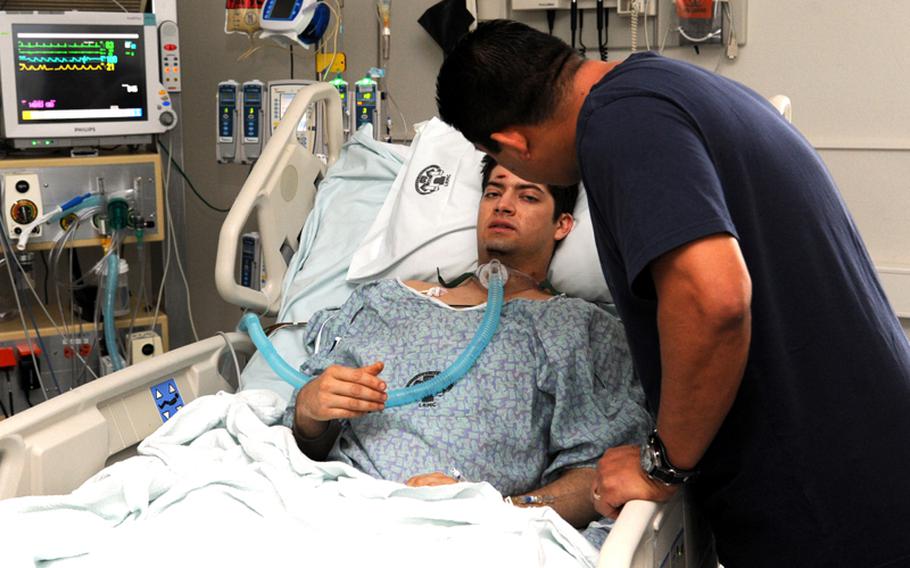 Buy Photo
Pvt. Eric Griego talks to his dad Peter in the intensive care ward at Landstuhl Regional Medical Center on Nov. 9. Griego, 22, wounded in Afghanistan was the first soldier to be flown from a combat zone while being treated with a portable heart-lung machine, known as an extracorporeal membrane oxygenation, or ECMO, machine. (Michael Abrams/Stars and Stripes)

LANDSTUHL, Germany &mdash; Three weeks ago, in the unfamiliar surroundings of a base commissary, Brenda Griego watched families pack their carts with cranberry sauce, boxes of stuffing and pre-made pie crusts.

She had arrived in Germany to be at the bedside of her 22-year-old son, Pvt. Eric Griego, who had been shot in the chest in Afghanistan. The bullet had shredded his lungs, an injury that is usually a death sentence.

&ldquo;I was watching them put turkeys and holiday trimmings in their carts,&rdquo; she said, &ldquo;and I thought: &lsquo;Are we going to be doing a funeral or are we going to be celebrating Thanksgiving?&rsquo; &rdquo;

&ldquo;When I heard he got hit, I thought we had lost him,&rdquo; he said. &ldquo;We do a lot of hunting together, and I know when you get a lung shot you have a matter of minutes.&rdquo;

Griego&rsquo;s escape from nearly certain death turned on moments of fortuitous timing and medical expertise, including the innovative use of a portable heart-lung machine &mdash; the first time the device was used in a combat evacuation.

His journey back started with the brave actions of his fellow soldiers. Griego and his unit were securing a road in southern Afghanistan on Oct. 19 when Taliban fighters opened fire from a nearby building. Griego was shot in the chest, and blood spewed from a bullet wound under his right ribs. Sgt. Matt Casting and Sgt. Mark Reed stanched it, keeping Griego from hemorrhaging, the most common cause of combat death.

Then, amid the heated firefight, the unit&rsquo;s medic, Spc. Allan Hughes, ran 650 meters to reach Griego, who was laboring to breathe because air was building in his lung cavity, putting pressure on his lungs to the point of near collapse. Hughes thrust a thick, long needle into Griego&rsquo;s chest, relieving the pressure and saving his life yet again.

Minutes later, Griego was evacuated to the Role 3 hospital in Kandahar. There doctors discovered a tiny wound near the left side of Griego&rsquo;s neck. This told them that the bullet had torn through his chest cavity, likely injuring both lungs, said U.S. Navy Dr. (Cmdr.) Eric Elster, director of surgical services at the hospital.

They wheeled Griego into the operating room. Elster and a team of surgeons searched for the severed vessels that poured blood into Griego&rsquo;s lungs. They stapled off the top of Griego&rsquo;s left lung, stemming the bleeding there.

But his right lung was full of holes. Despite their best efforts to stop all the leaks, the doctors could not control the bleeding, Elster said. So the surgeons clamped off the blood flow to the right lung, ensuring that it would have to be removed later.

A CT scan showed the bullet&rsquo;s path through Griego&rsquo;s chest. It had punctured his right chest near his back and then ricocheted off his spine &mdash; somehow not injuring it &mdash; and out the top of his left neck.

&ldquo;He did have injuries to both his lungs,&rdquo; Elster said. &ldquo;But this was kind of a lucky shot, in that he did not have any other injuries to his spinal cord or esophagus that would have magnified it.&rdquo;

The lung team landed in Kandahar that afternoon and tried several different ventilators on Griego, attempting to force air into his remaining lung to make him stable for flight. But all the ventilators failed, and Dr. (Lt. Col.) Sandra Wanek, who led the combat evacuation mission, chose to use a portable heart-lung machine that performs a therapy called extracorporeal membrane oxygenation, or ECMO.

The device, about the size of a suitcase, forces the blood through an artificial membrane that lets in oxygen while taking out carbon dioxide &mdash; mimicking the trade-off that naturally takes place in the lungs. The machine worked even better than Wanek expected, and by the time the team landed at Landstuhl several hours later on Oct. 20, Griego&rsquo;s condition had started to improve.

He was then flown to the university hospital in Regensburg, Germany, where doctors have particular expertise with the portable ECMO machine. Doctors there had also trained Wanek and her team how to use the device in July.

Developed in the 1980s as a way to save the lives of premature infants with underdeveloped lungs, ECMO was never formally approved as a therapy in the United States because the machine was used only as a last-ditch, life-prolonging measure. Recently, however, ECMO machines have been used to treat patients with lung failure, including H1N1 influenza patients, with better prognoses.

Maquet, the company that developed the portable ECMO machine, is trying to get it approved for broader use in the U.S., particularly with patients suffering lung or heart failure who need to be transported.

A ruling by the U.S. Food and Drug Administration is expected sometime next year, but Wanek said she knows what would have happened to Griego had he received same gunshot wound stateside.

&ldquo;This happens to you in Los Angeles,&rdquo; she said, &ldquo; and the mortality rate is about 70 percent.&rdquo;

A ventilator, Wanek explained, pushes air into the lungs, but that process can further injure, or even kill, patients whose lungs are damaged and weak.

The ECMO machine bypasses the lungs entirely. At the Regensburg hospital, Griego was kept sedated as the machine controlled the oxygen and carbon dioxide in his bloodstream. His remaining lung was left to heal.

There, Peter Griego read to his son from several hunting magazines, telling him about the latest rifles and archery bows &mdash; unsure whether they would again go hunting for deer and elk in mountains a few hours from their home in Mesa, Ariz. A weak squeeze of the hand was the only indication that his son could hear him. But Griego&rsquo;s remaining lung slowly recovered, and doctors started forcing it to take &ldquo;baby breaths,&rdquo; Wanek said.

&ldquo;As the lung was doing better,&rdquo; she said, &ldquo;we were able to let the lung do a little more, and the machine do a little less.&rdquo;

After more than two weeks at the Regensburg hospital, Griego was taken off the ECMO machine. He returned to Landstuhl, where his tracheotomy tube was also removed, allowing him to talk in whispers when his father held two fingers over his open windpipe.

In Landstuhl&rsquo;s intensive care unit, Griego sat up for the first time Nov. 8. His 17-year-old brother, Peter Jr., placed headphones on his ears, letting him listen to a favorite &rsquo;90s hip-hop group, Atmosphere. Griego&rsquo;s lips mouthed the words of the songs, and Griego squeezed his younger brother&rsquo;s hand when he wanted the tune changed.

Wanek said she expected Griego to make a full recovery, &ldquo;in that he will go home and live a normal life. He just needs to get used to having a lot less lung.&rdquo;

Griego was eventually flown to Brooke Army Medical Center in San Antonio, where he began physical therapy. He regained the ability to speak on his own last week, and this week he will join his family at the Fisher House to eat turkey and celebrate Thanksgiving.

&ldquo;It&rsquo;s my favorite holiday because all of my family is there,&rdquo; he said. &ldquo;This time it&rsquo;s going to be my immediate family and the wounded soldiers and their families. But I definitely think this Thanksgiving will mean the most to me.&rdquo;

Afterward, his recovery will continue. His legs are weak, but he has started to walk with the help of a family member or a walker.

&ldquo;I still get winded just sitting up. I yawn like a baby, and when I need to take a deep breath I can tell that it&rsquo;s not all there,&rdquo; he said of his missing lung.

None of the doctors have been able to tell Griego precisely what physical limitations he can expect, beyond acknowledging that he will likely not run a marathon anytime soon.

&ldquo;I think everybody is still amazed that I made it,&rdquo; he said. &ldquo;And they are just as curious as me.&rdquo;

The only family member still unaware of Griego&rsquo;s injuries and miraculous recovery is his 4-year-old daughter, Rylie.

&ldquo;I haven&rsquo;t called her because I&rsquo;m not sure what I want to tell her,&rdquo; he said. &ldquo;But her mother told me she says a prayer for her daddy and his Army buddies every night.&rdquo;