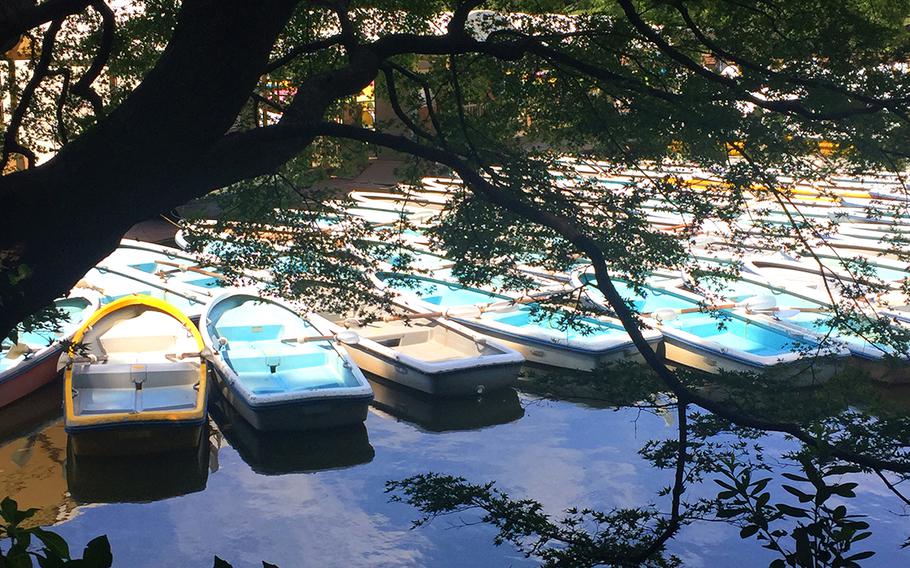 Buy Photo
One of the most popular activities at Inokashira Koen is to rent a boat -- customers have the option of choosing either a swan paddle boat or a rowboat -- and spend time on the large pond that forms the centerpiece of the park. (Kat Bouza/Stars and Stripes)

Buy Photo
One of the most popular activities at Inokashira Koen is to rent a boat -- customers have the option of choosing either a swan paddle boat or a rowboat -- and spend time on the large pond that forms the centerpiece of the park. (Kat Bouza/Stars and Stripes) 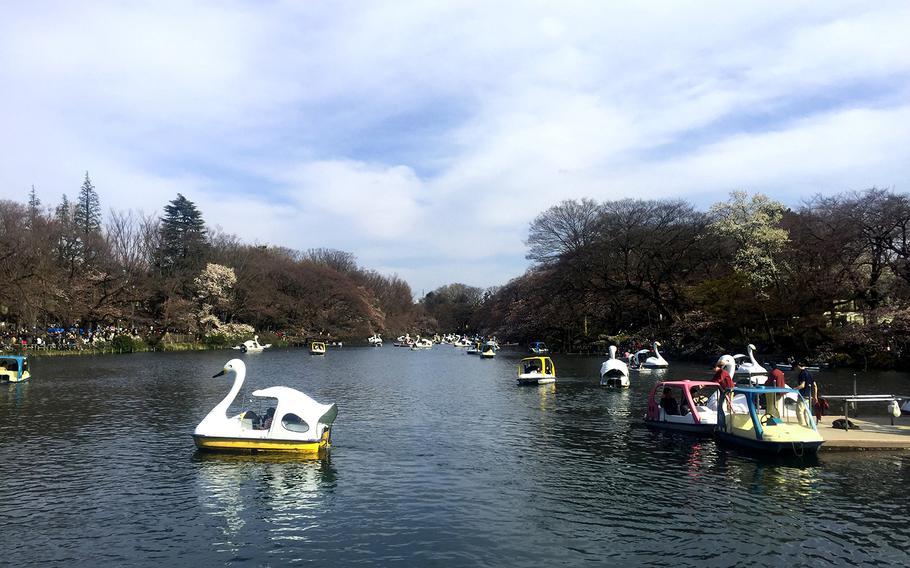 Buy Photo
For more than 100 years, Tokyo's Inokashira Koen has served as a gathering place for families and young people, who flock to see its scenic landscape complete with a large natural pond. (Kat Bouza/Stars and Stripes) 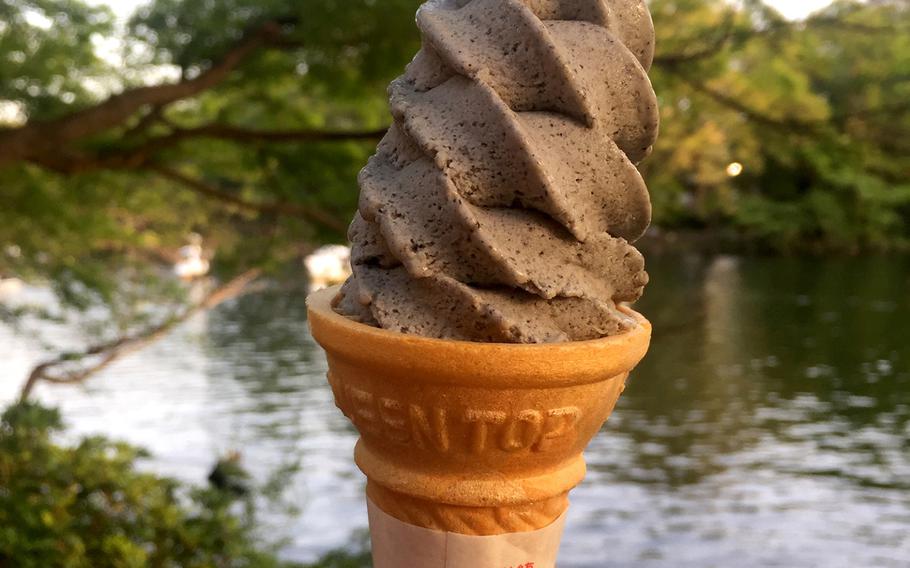 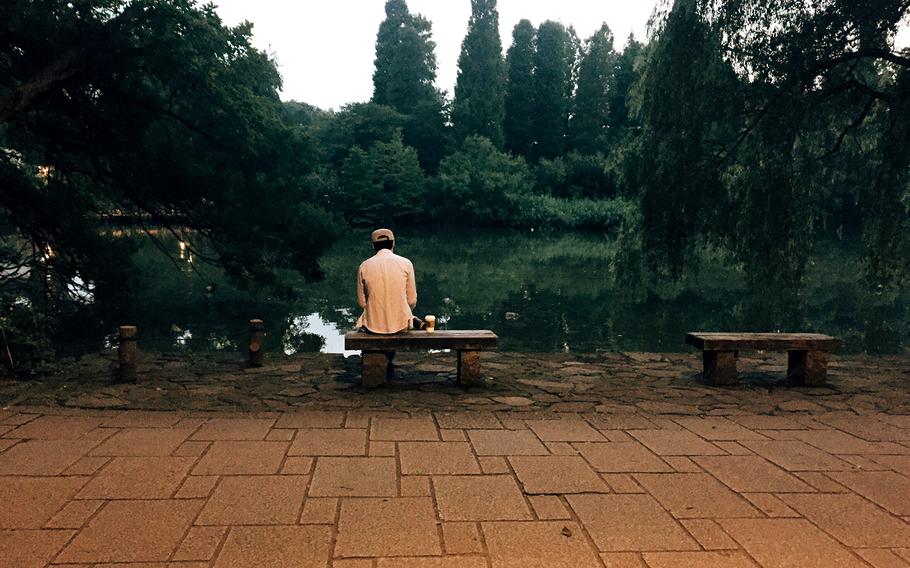 Buy Photo
Despite its popularity among locals, Inokashira Koen also offers plenty of quiet spaces where visitors can enjoy nature without many disruptions. (Kat Bouza/Stars and Stripes) 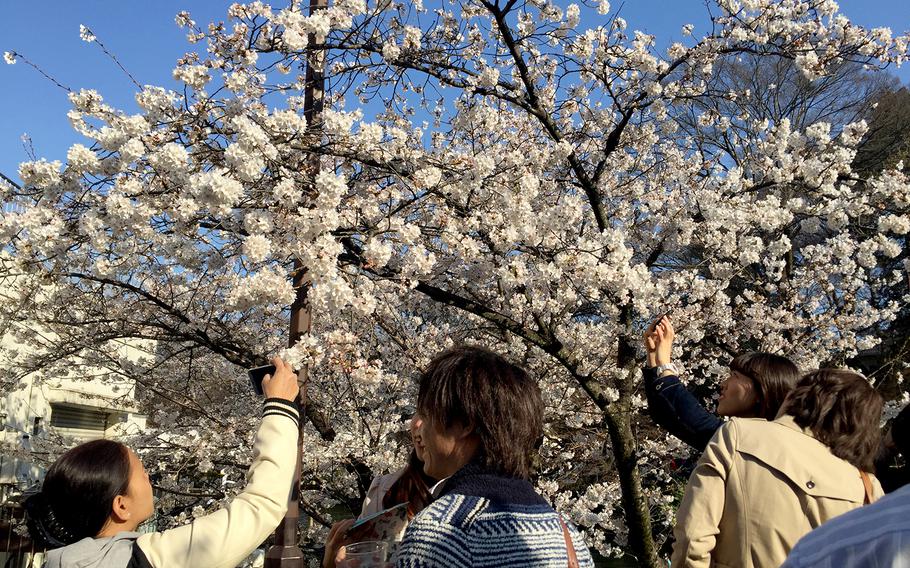 Buy Photo
Tokyo's Inokashira Koen is a famous spot for hanami, or cherry blossom viewing, and is even included in the Japanese government's list of the 100 best hanami locations in Japan. (Kat Bouza/Stars and Stripes)

For more than 100 years, a park in the heart of the trendy neighborhood of Kichijoji has been drawing families and young people with its scenic landscape complete with a large natural pond, many sakura trees and an adjacent street lined with stylish stores and cafes.

Inokashira Koen is a 95-acre park situated in the suburban Tokyo community of Musashino on the site of a former shogunate-owned forest. The land it sits on was donated to the city of Tokyo by the Japanese government in 1913, and the park opened to the public in 1917.

As the Musashino area is home to more than 10 colleges and universities, the park is a hotspot for local students looking to relax and socialize between classes and on weekends. It’s also a famous spot for hanami, or cherry blossom viewing, and is included in Japanese government’s list of the 100 best hanami locations in Japan.

Inokashira Koen comes alive on weekends, when a large number of vendors and performers descend on the park to provide entertainment to the large groups of families and hipsters who gather there.

Although many of the performers, such as balloon artists and puppeteers, appeal to the younger set, there’s plenty for adults to enjoy, too. Couples often flock to the caricature artist who regularly sets up shop by the playground near the bandshell, while local college students can usually be found watching a modern take on a traditional rakugo, or comedic storytelling, performance.

Among the most famous of the regular faces at Inokashira Koen is Broom Duster Kan — a one-man band comprised of an elderly blues aficionado, his customized resonator guitar and a harmonica. Kan, a fixture in Tokyo’s blues scene, performs renditions of genre standards and reworked 1960s rock hits near the park’s main entrance almost every weekend.

One of the most popular activities at Inokashira Koen is to rent a boat — customers have the option of choosing either a swan paddle boat or a rowboat — and spend time on the large pond that forms the centerpiece of the park. The boats, a fixture at the park since 1929, often draw a crowd, so be prepared to wait before setting sail on weekends or holidays.

The pond’s boats are considered a one-way ticket for a breakup, as many couples allegedly call it quits after taking a ride with their beloved. While some brave lovebirds throw caution to the wind and rent a boat despite the lake’s supposed curse, superstitious visitors should opt for a boat ride at a less auspicious Tokyo park instead.

The park’s other mysterious powers over love and happiness lie within the gates of Inokashira Benzaiten — a small but inviting temple dedicated to the Buddhist goddess of the same name located on the southwest end of the pond. Benzaiten is rumored to despise happy couples, leading the relationships of those who visit the temple to disintegrate. However, couples may ward off Benzaiten’s jealousy by bringing an offering of fruit (preferably strawberries) and eating it together near the building’s entrance.

A safe way to avoid any relationship disasters while visiting Inokashira Koen is to make a stop at two of the park’s most famous institutions: The Inokashira Natural Culture Park, better known as the Inokashira Park Zoo; and the Mitaka no Mori Ghibli Museum, dedicated to celebrating the history of the famous Japanese animation studio.

The zoo, which opened in 1942, is split into two sections — which often causes confusion for first-time visitors. The facility in the center of the pond contains waterfowl and other bird species, while larger animals and a small amusement park for young children are in a secondary facility across Kichijoji Dori. Foreign residents and tourists can show their passports at the ticket booths for a small discount on entry.

The best way to end an excursion at Inokashira Koen is with an ice cream cone — specifically from the small snack shack located on the northern end of the bridge bisecting the pond. While ice cream is plentiful in the park, the soft cream variety sold here comes in almost 30 different flavors, from the classic (vanilla and chocolate) to the more offbeat (rose and black sesame). At just 350 yen (about $3.25) per cone, it’s a far more affordable choice than the desserts sold in the hip cafes lining the street that leads from Kichijoji Station into the park. Just be sure to bring your food waste and other trash out of the park, as garbage cans haven’t made an appearance in Inokashira Koen since the year 2000.

Over the decades, Inokashira Koen’s offerings have changed throughout several park expansions and renovations. The park still isn’t without its quirks — and, while it might lack the size or grandeur of Tokyo’s more famous Ueno Park, the familiar and communal atmosphere is what endears Inokashira Koen to the neighborhood’s residents. For those in search of a taste of local life away from the tourist traffic of Tokyo, a day spent in Inokashira Koen will be a day well spent.

COSTS: Park entrance is free. Boat rentals vary by time, with most rentals starting at 700 yen (about $6.75) for one hour. Entrance to the Inokashira Park Zoo is 400 yen for adults, 200 yen for seniors, 150 yen for teenagers, and free for children 12 and younger. Foreign tourists and residents receive a 20 percent discount upon showing their passport.

FOOD: Several vendors operate within the park, and operation times vary. At the boat house, basic snacks such as yakisoba (380 yen) and onigiri (240 yen for two) are available. Ice cream (350 yen) and alcoholic beverages (500 yen) are available at the snack stand near the bandshell. Vending machines are also located throughout the park, and there are a number of convenience stores in the vicinity.