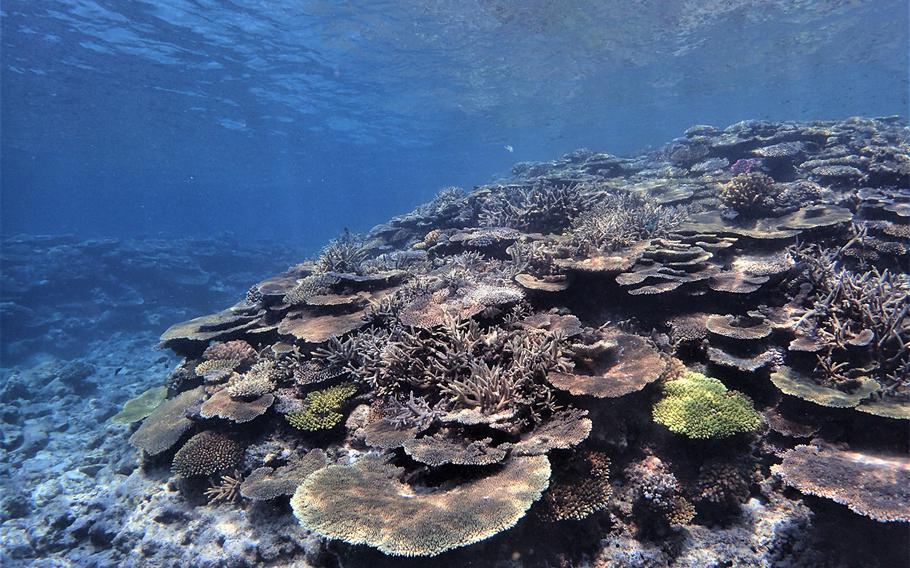 Buy Photo
The waters around Izena were spared from the mass bleaching of coral, so the island has long been a famous spot for snorkelers and scuba divers looking to catch a glimpse of marine life. (Aya Ichihashi/Stars and Stripes)

Buy Photo
The waters around Izena were spared from the mass bleaching of coral, so the island has long been a famous spot for snorkelers and scuba divers looking to catch a glimpse of marine life. (Aya Ichihashi/Stars and Stripes) 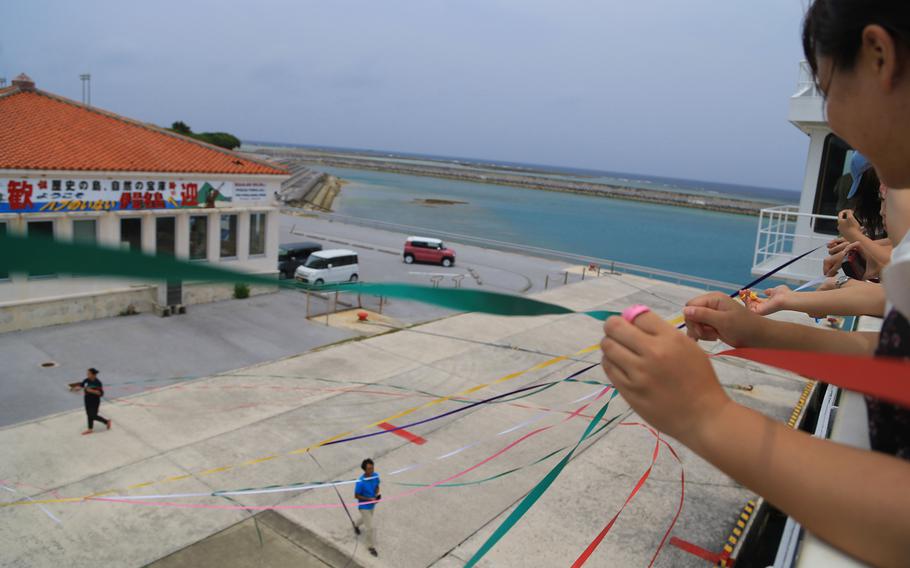 Buy Photo
When the ferry departs Izena, the island's residents offer visitors a delightful send-off in the form of colorful paper streamers and cheerful goodbyes. (Aya Ichihashi/Stars and Stripes) 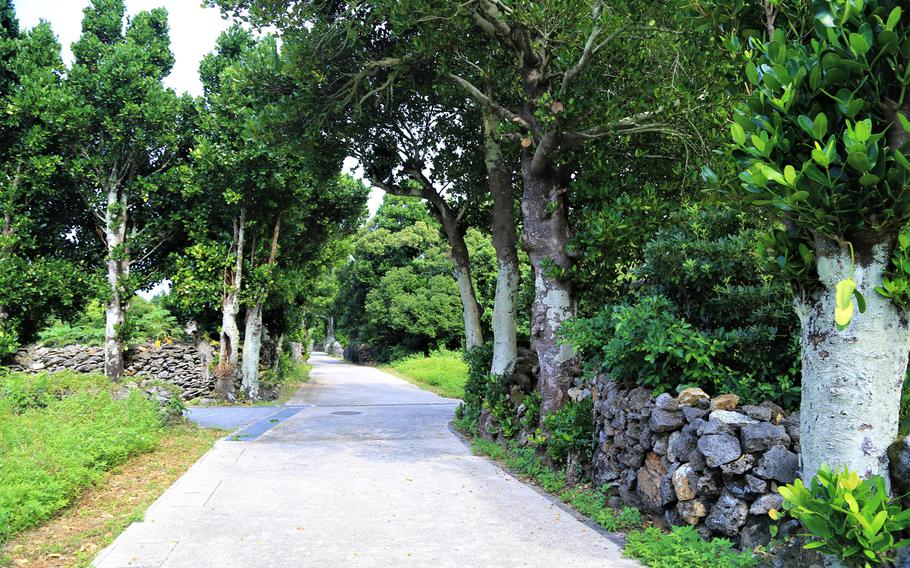 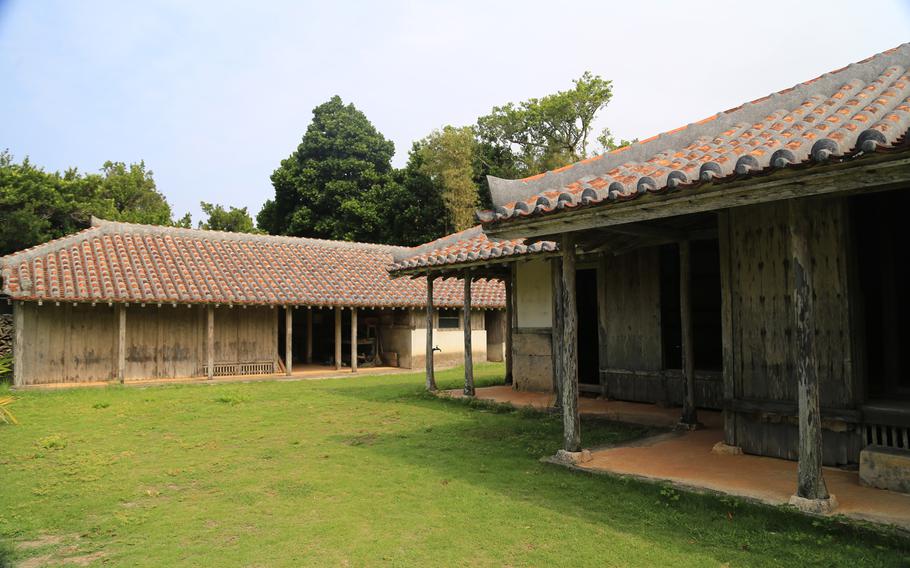 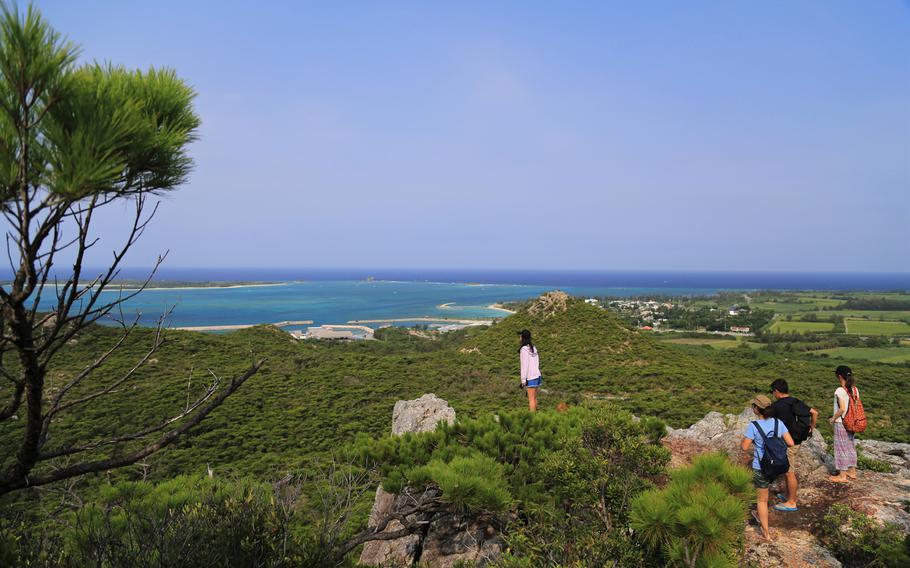 Buy Photo
For those looking to escape the larger crowds of Naha or Okinawa City, Izena provides an easy getaway for anyone in search of adventure -- or simply a weekend away from home. (Aya Ichihashi/Stars and Stripes) 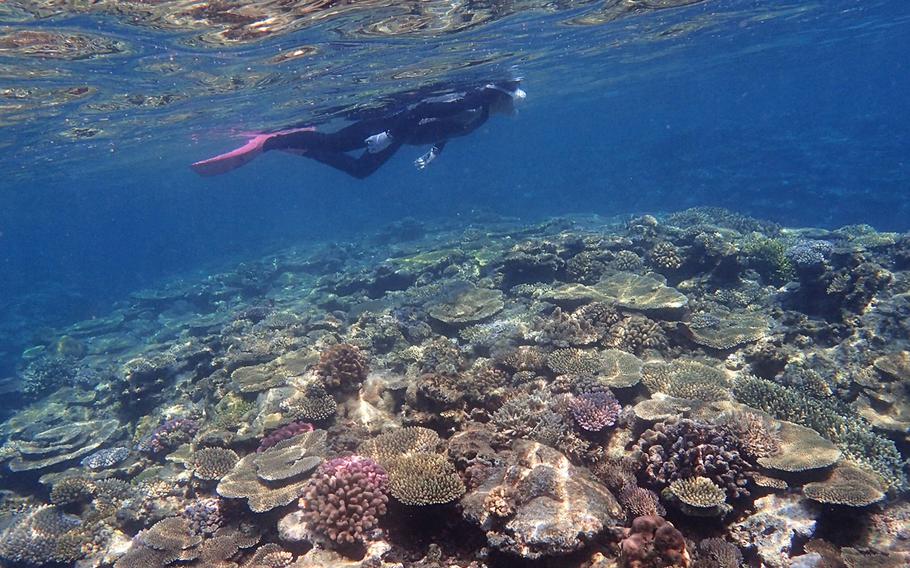 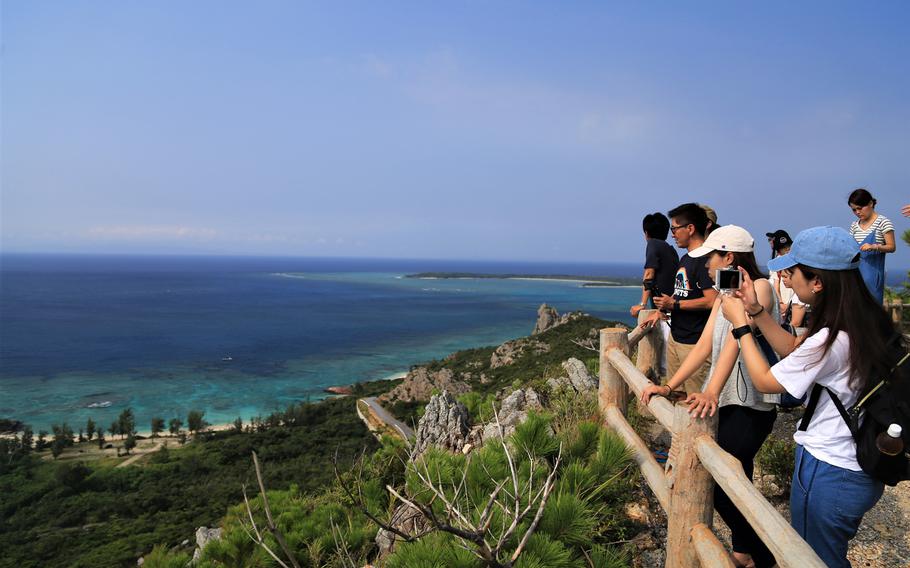 Izena Island, one of the smaller islands that comprise the Ryukyu Island chain, is only a 55-minute ferry ride from northern Okinawa — but the island seems like it was frozen in time, due mainly to the way in which its residents preserve the traditional Okinawan way of life.

The island’s population is small, about 1,500 residents, and the island’s entire perimeter totals just 10 miles. For those looking to escape the larger crowds of Naha or Okinawa City, Izena provides an easy getaway for anyone in search of adventure — or simply a weekend away from home.

The relatively new Ferry Izena, which shuttles visitors to the island twice a day, departs from Unten Port, located about a 30-minute drive from the nearby city of Nago. Round-trip tickets for adults and children are available, and cars can also be brought onto the ferry for an additional fee based on the vehicle’s size.

On my ferry ride to Izena, I decided to stay outside to enjoy the view and sea breeze. The ride across the water offers the chance to see sea turtles swimming alongside the ferry, or schools of flying fish jumping out of the water.

Due to its small size, there are no public transportation or taxi services available on Izena — so visitors who leave their personal vehicles at home should consider renting a car (3,600 yen), moped (2,050 yen) or bicycle (820 yen) at Izena Rental Car, conveniently located across from the ferry dock at Nakada Port. The Izena Tourist Bureau is also located at the port, and can assist travelers with questions about the island and its many activities.

There are several guesthouses offering lodging to tourists on Izena. On the recommendation of the tourist bureau, I stayed at Nakagawa Kan — a facility that serves a delicious breakfast and dinner for its guests that’s included in the cost of the stay.

Izena is one of the few islands in the Ryukyu chain that is free from the region’s venomous habu snakes, which comes as a great relief for those looking to explore the many outdoor activities on the island.

There are three designated camping sites on the island, all of which are free of charge. The Izena Campsite even offers the comforts of home in the form of a shower and toilets.

Not big on camping? Take advantage of the pristine beaches and snorkeling sites located around the island instead. The waters around Izena have so far been spared from the mass bleaching of coral, and the island has long been a famous spot for snorkelers and scuba divers looking to catch a glimpse of marine life. This was one of the reasons I was inspired to visit the island.

I joined an afternoon snorkeling tour hosted by Izena Marine Service Guin — the only shop on the island — that offers boat snorkeling and stand-up paddleboard tours — and was delighted to find that the region’s coral remains incredibly beautiful and healthy. Later that evening, on a different tour, the guide took me to a beach where I was able to relax and listen to the waves while examining the starry night sky. It was truly a memorable experience.

The next morning, I decided to hike to Izena Forest Park — which offers a breathtaking view of the entire island. I also visited Nakada Community, where traditional Okinawan houses are preserved for visitors. The coral stone walls unique to these homes are a rare sight, as it is now illegal to remove coral from the region’s ocean.

Of particular note is Mekaru House, which survived bombings in World War II and is now registered as a nationally important cultural property. The Mekaru family can trace its lineage back to the Ryukyu Kingdom era of King Shoen, who was born on the island in 1415.

Izena is also famous for its rice farms, and tourists can purchase the island’s first crop of the year at Nakada Port. I bought a bag of rice, as well as a bag of the region’s miso. It was quite heavy to carry these souvenirs, but I wanted to bring back a piece of Izena with me. (If you don’t want to carry a large bag of rice home, you can sample it at Teruteru — a restaurant located at the port.)

When the ferry departs Izena, the island’s residents give visitors a delightful send-off with colorful paper streamers and cheerful goodbyes. As my ferry departed, I watched as people at the port held onto the tapes and waved goodbye, even as the ferry moved farther and farther away.

These small gestures of hospitality, along with the beauty of the island’s coral reefs and unspoiled landscape, made me realize how special Izena Island is — and I vowed to return again someday.

Izena IslandDIRECTIONS: Izena Island is located off the northwest coast of Okinawa and is accessible via ferry.

TIMES: The Izena ferry departs Unten Port twice a day at 10:30 a.m. and 3:30 p.m. The ferry back to Okinawa also departs twice daily from Nakada Port at 9 a.m. and 1:30 p.m. Hours of operation for attractions varies.

INFORMATION: The Izena Tourist Bureau (0980-45-2435) is open weekdays 8:30 a.m. to 5:30 p.m. The English-speaking concierge, Kasumi Miyagi, can assist foreign visitors. Bring cash, as most vendors on the island do not accept credit cards.