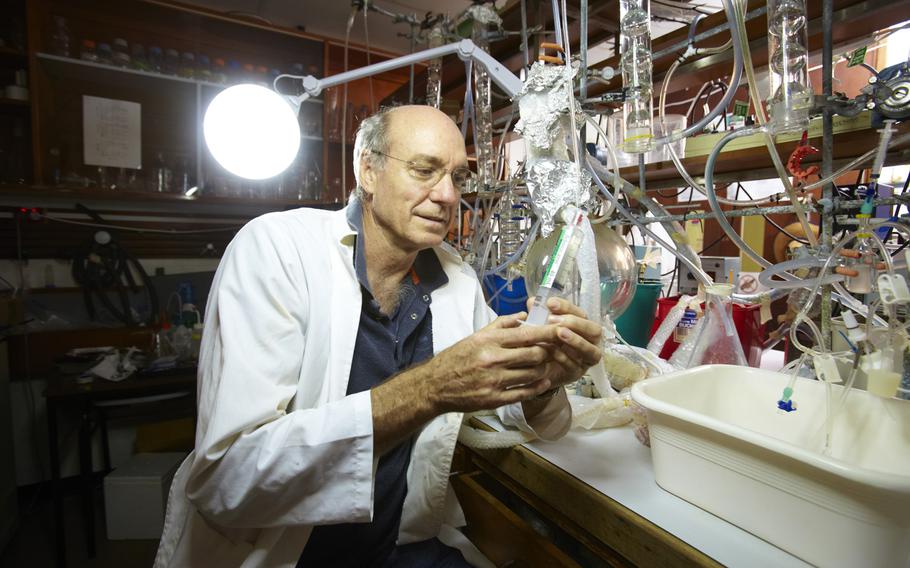 Geoffrey Dobson, a professor at Australia's James Cook University, displays a dose of Adenocaine. The developmental drug has earned a $200,000 Navy research grant for its potential to extend the time that some battlefield-wounded servicemembers have to reach a hospital. (Courtesy of Geoffrey Dobson)

An Australian scientist and Navy medical researchers are developing an injection that could greatly extend the time severely wounded servicemembers have before reaching a hospital, while protecting their vital organs from the effects of shock and blood loss.

When someone loses a lot of blood, the body goes into shock. Blood pressure drops and organs don’t get the blood and oxygen they need to survive.

The most common treatment outside of a blood transfusion is to pump the injured person with up to a liter of salt water or, in some cases, a starch solution.

Salt water replaces the volume of blood lost. Circulation continues, but it does nothing to protect the heart and can dilute the blood to dangerous levels if overused.

Geoffrey Dobson has come up with a small-dose drug named Adenocaine that instructs the body to increase circulation without diluting the blood.

“The heart slowly hits the accelerator and raises the blood pressure of a soldier into what they call a permissive range,” he said. “It’s enough oxygen to get to vital organs and sustain life, but not high enough to pop the blood clot or re-bleed.”

The battlefield implications are clear, and if Dobson’s use of the drug becomes a reality, the military may well have hummingbirds to thank for it.

Dobson began his academic career in zoology, well before taking his current post in the Heart and Trauma Research Laboratory at Australia’s James Cook University.

Dobson became interested in the way hummingbirds and other hibernating animals naturally slow their hearts. Doctors typically arrest human hearts during surgery by flooding it with a solution high in potassium.

The drawback is that this alters the heart’s voltage and potentially introduces complications. Dobson developed the mixture of drugs called Adenocaine in the late 1990s to preserve the heart’s natural electrical state, and it has been used in thousands of surgeries.

What then piqued Dobson’s curiosity, and drew the interest of defense officials, was how gently the drug appeared to resuscitate patients as it wore off.

The drug in its resuscitative form would fit in a single syringe, lightening the load for medics and corpsmen who carry saline or hetastarch.

For now, many military medics and corpsmen avoid adding to the blood volume at all during medical evacuations, said Capt. Eric Elster, a Navy doctor who served as director of surgical services at the Multinational Medical Unit hospital in Kandahar, Afghanistan.

A servicemember who is badly wounded in Afghanistan and within a short distance of a top-tier trauma hospital like the one at Kandahar has an excellent chance of surviving. Ninety-seven percent of patients admitted with vital signs survived, he said.

Teams of surgeons and the type of equipment found at a well-stocked American city hospital are readily available there for casualties. When necessary, the injured begin receiving blood soon after rolling through the doors.

Unfortunately, servicemembers injured far from a major facility may not have the time to get there. Evacuation crews must sometimes decide whether to fly a wounded servicemember to a smaller hospital in 30 minutes, or risk a longer trip to a facility with better treatment options.

Dobson’s goal is for Adenocaine, combined with effective first aid, to give a trauma victim at least an extra hour — and maybe a few more hours after that — to arrive at a surgical suite.

“This is where it becomes very interesting,” Elster said. Adenocaine “could potentially extend that window to get to that level of care.”

The early studies on Adenocaine are promising, said Douglas Tadaki, of the Naval Medical Research Center in Silver Spring, Md.

Before sequestration, the Navy had granted initial funding of $200,000 to further study how the drug works. But the budget battle has delayed the research, Dobson said. He’s hopeful military officials will be able to free up the funds in May.

“It is a shame because ... small teams are still called upon to operate in far-forward environments where medical resources are limited and where we think our research will fill a major capability gap,” Dobson said.

The drug will also require further animal trials, followed by human trials and evaluation by the Food and Drug Administration. With funding in place, Dobson predicted that human trials could begin within 12 months.

If successful, salt water could one day be relegated to the hydration bag.

“The current standard of care is definitely not ideal,” Tadaki said. “We want to make sure there is applicability [for Adenocaine] not just for the Department of Defense, but civilian use as well.”