‘Everything was on fire’ 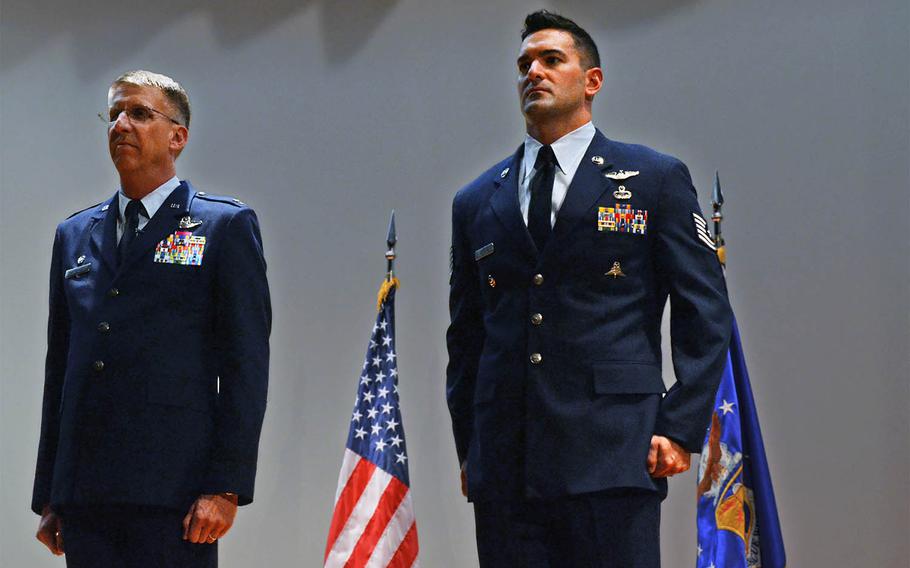 Tech. Sgt. Daniel Warren, right, a pararescueman with the 920th Rescue Wing, received a Bronze Star with "V" device for valor for his actions during a 2012 insurgent attack on Bastion Airfield, Afghanistan. Warren stands next to 920th Rescue Wing Commander Col. Jeffrey Macrander during the award ceremony at Patrick Air Force Base in Florida on March 2, 2014. (Paul Flipse/Courtesy of the U.S. Air Force)

Tech. Sgt. Daniel Warren, right, a pararescueman with the 920th Rescue Wing, received a Bronze Star with "V" device for valor for his actions during a 2012 insurgent attack on Bastion Airfield, Afghanistan. Warren stands next to 920th Rescue Wing Commander Col. Jeffrey Macrander during the award ceremony at Patrick Air Force Base in Florida on March 2, 2014. (Paul Flipse/Courtesy of the U.S. Air Force) 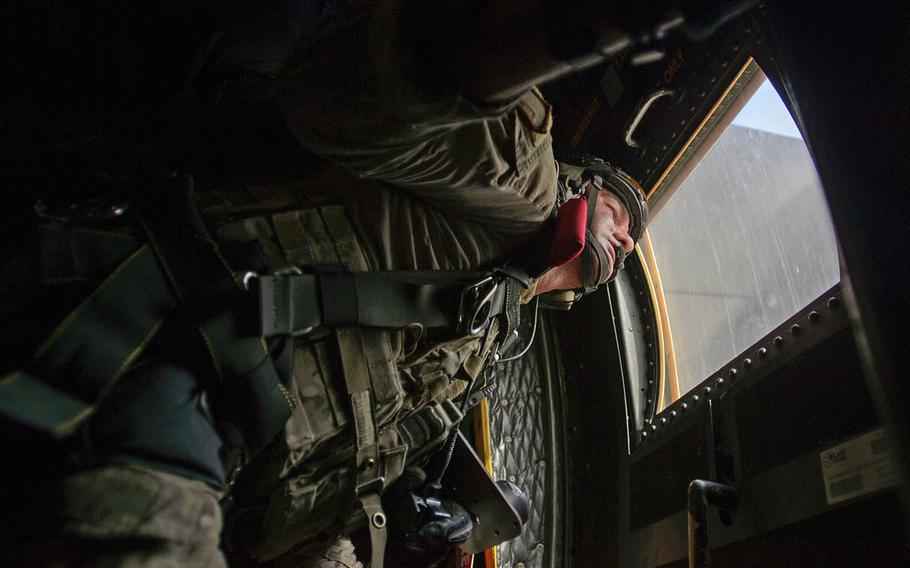 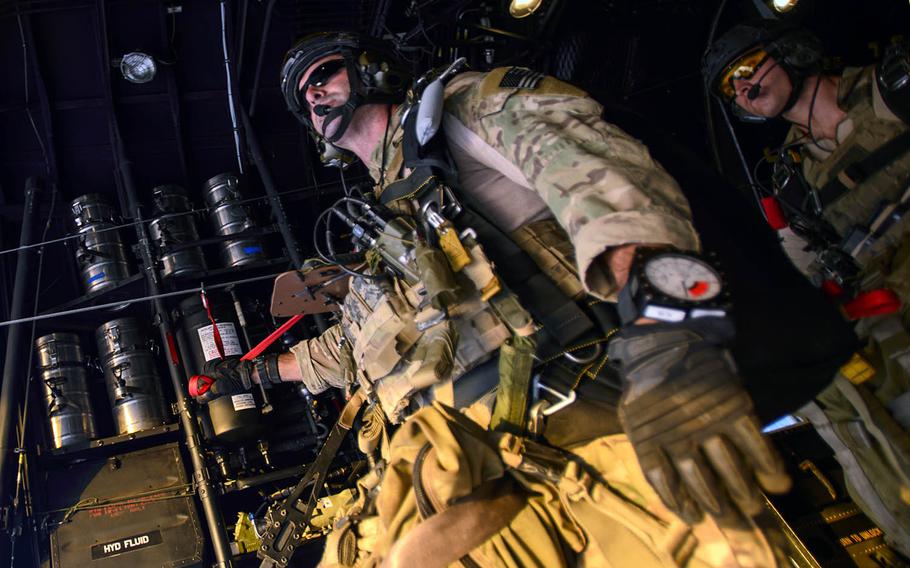 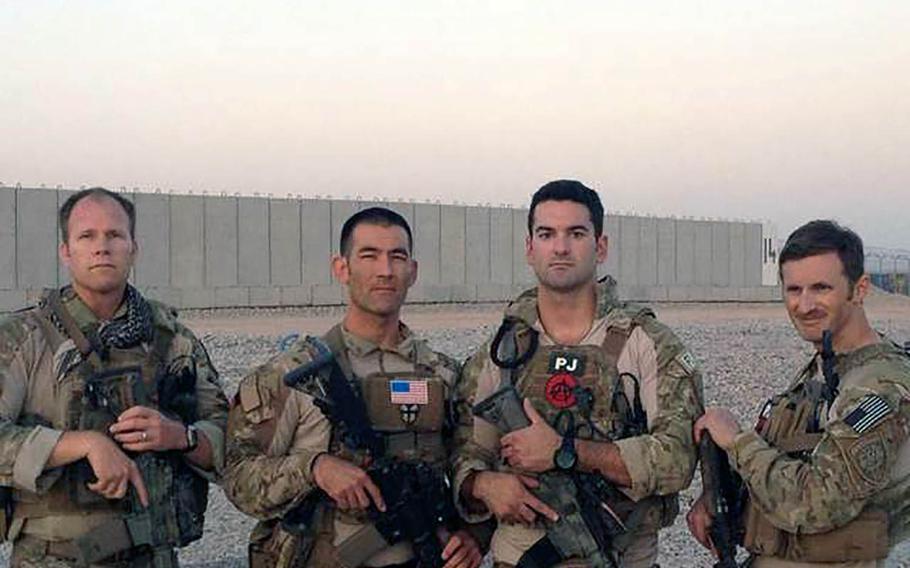 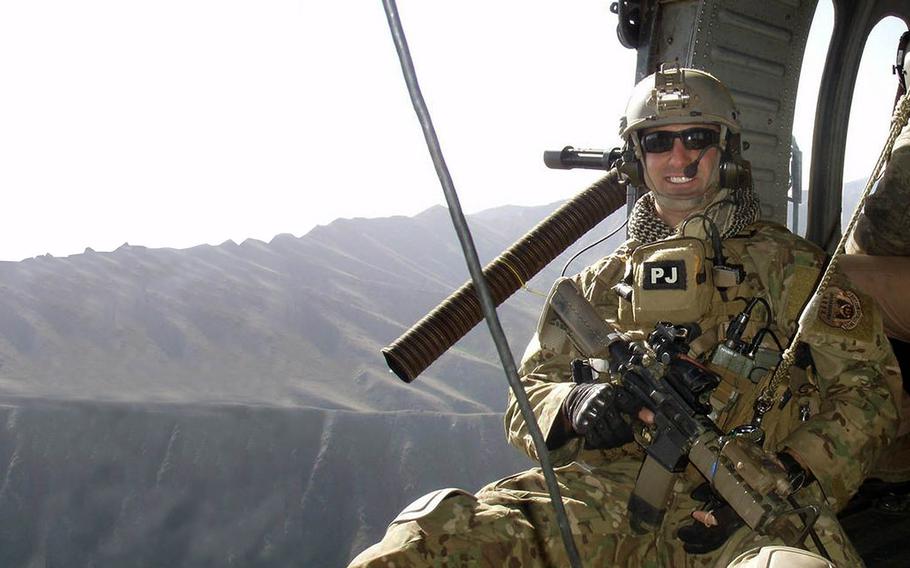 Tech Sgt. Daniel Warren and three other pararescuemen received the Bronze Star with 'V' device for valor for their roles in an attack Sept. 14, 2012, by 19 Taliban fighters on Camp Bastion in Afghanistan. Two Marines were awarded the Silver Star, one posthumously. (Courtesy of the U.S. Air Force)

Sept. 14, 2012 Helmand province, Afghanistan The insurgents chose the darkest night of the year to attack the coalition base in Helmand province, Afghanistan, using the darkness and U.S. Army uniforms to hide their advance on Sept. 14, 2012. Fifteen Taliban fighters assaulted the eastern side of Camp Bastion, a major transit center and logistical hub.

Air Force Tech. Sgt. Daniel Warren was one of many on the base blissfully unaware of what was about to happen. Warren, a pararescueman, or “PJ,” was a bona fide hero, credited along with three comrades in the rescue of more than 50 Afghan civilians after a series of avalanches in the Hindu Kush in 2010.

Warren said the base — called “PJ Heaven” for its high operational tempo — was slow on the night of the assault, and he was watching a movie in the day room, about to fall asleep.

He and his fellow PJs thought someone was playing a joke on them. A repeated plea from the radio got their attention: “We are taking small-arms and RPG fire … we need help.”

“Ten of us jump off the couch like it was an ejection seat,” Warren recalled. “PJs sprint outside as the officers sprinted to the [Tactical Operations Center]. Running outside on the flight line, the night sky was lit up by a huge multistory inferno across the flight line.”

Fifteen Taliban fighters had penetrated one of the walls of the large base and separated into three teams. Everything was chaos. In those first few minutes, the insurgents were able to fire rocket-propelled grenades at eight Harrier fighter jets, destroying six and damaging two before fanning out in smaller groups around the airfield.

Warren and his crew ran to their helicopters to grab prestaged weapons and ammo and set a security perimeter around the helipad. That’s when a call came in for medical personnel to head to the operations center, and from there, across to the flight line to aid those who were wounded.

Into the chaos they went.

“We chambered a round, threw our [night-vision goggles] on our eyes … and went looking for work,” Warren said. “We drove in an unmarked white pickup truck, loaded with guns, ammo, NVGs and medical rescue gear across the flight line to the main battle lines inside the wire.”

After making sure that they weren’t fired upon by friendly forces, Warren, Komatsu and the others headed toward a casualty-collection point that the Royal Air Force, then the base’s major tenants, set up. Not far away, a fuel depot had been set ablaze, and Warren realized that’s where he needed to be as a medic and shooter. They got in a British armored truck, driven by a man who had “a thick northern accent.”

“We could see nothing as the truck sped across the flight line,” Warren said. “We just felt every divot in the road as we drove.”

They weren’t where they needed to be. Warren and his three fellow PJs sprinted across open ground to reach an RAF rally point manned by airmen of the 51st Squadron. There, Warren and Master Sgt. Kyle Minshew checked out and treated “mostly superficial shrapnel injuries.”

Near the rally point was a cryogenic compound, containing multiple canisters of liquid oxygen, which if ignited would be “literally a worst-case scenario in terms of kinetic engagement,” Warren said.

Their job was to kill or capture the remaining insurgents while making certain the oxygen canisters remained secure.

“Everything was on fire; all around us were trailers pockmarked by bullet holes,” he recalled.

Hazmat-marked material was stacked in tents that were smoldering or actively burning.

Eventually, the British and American forces converged on a single bunker, where they detected movement under a tarp. Because of the chaotic nature of the battlefield, they were unsure whether that movement was friendly or enemy. British forces were sent to investigate. Insurgents were hiding there, and when confronted they threw a grenade at the British but it bounced off a wall, killing the insurgents instead.

The night wasn’t over for Warren and his fellow PJs. More fire came from the direction of the Harrier compound, “a stream of red tracers the size of golf balls,” Warren said.

Komatsu radioed nearby helicopters, who engaged the enemy and killed nearly all of them as they hid behind concrete barriers, pinned down by British and U.S. ground forces.

Warren saw some movement out of the corner of his eye from an insurgent.

“He was probably wounded, but he was definitely holding something, and we had orders” to shoot, he said. Later, photos would show that the insurgent had been holding a grenade.

Finally, the PJs reached the Harrier compound, where they were greeted by Marines whose commander had died in the attack.

Lt. Col. Christopher Raible, the squadron commander of Marine Attack Squadron 211, was nearby when the attack began. He ran across open ground under fire with only his service pistol to turn back the attackers, but was killed by the impact from a rocket-propelled grenade. Raible would receive the Silver Star for his actions. When Maj. Robb McDonald learned that Raible was dead, he “assumed command and began directing the tactical situation,” according to the citation for his Silver Star. “McDonald’s decisive leadership and tactical expertise inspired his Marines to vigorously repel the enemy.”

Also killed in the attack was Marine Sgt. Bradley Atwell, 27, who was assigned to Marine Aviation Logistics Squadron 13.

“Riding alone with Lt. Col. Raible, I tried to reflect on the lifetime of training and sacrifice that got him to where he was at; it was staggering,” Warren said. “The brazen courage it took for him, as a father, husband and commander to engage those terrorists with just a Beretta. A true Marine.”

For his own part in the five-hour firefight, including rendering first-aid to wounded British and U.S. personnel and playing a vital role in the counterattack against the insurgents, Warren earned a Bronze Star with “V” device for valor in 2014. He would earn a second Bronze Star for valor in 2015 for a 2013 rescue of Americans from a United Nations base in Bor, South Sudan.

Looking back now, Warren says it was the PJs around him — Komatsu, Minshew and Chief Master Sgt. Paul Barendregt — who inspired him to continue to fight at Bastion. The men were also awarded the Bronze Star with “V” device for valor.

“Having the guys by my side at the Camp Bastion attack was an awesome thing,” he said. Warren, 32, is now an officer in the Alaska Air National Guard, serving as a combat rescue officer in the 176th Air Wing, and is married with a daughter.