‘Everybody was alive to play the next day’ 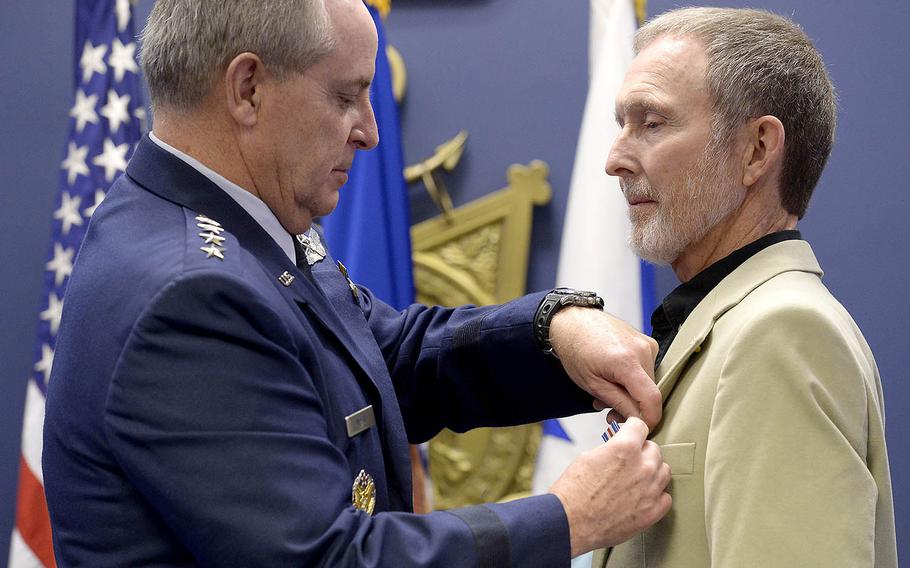 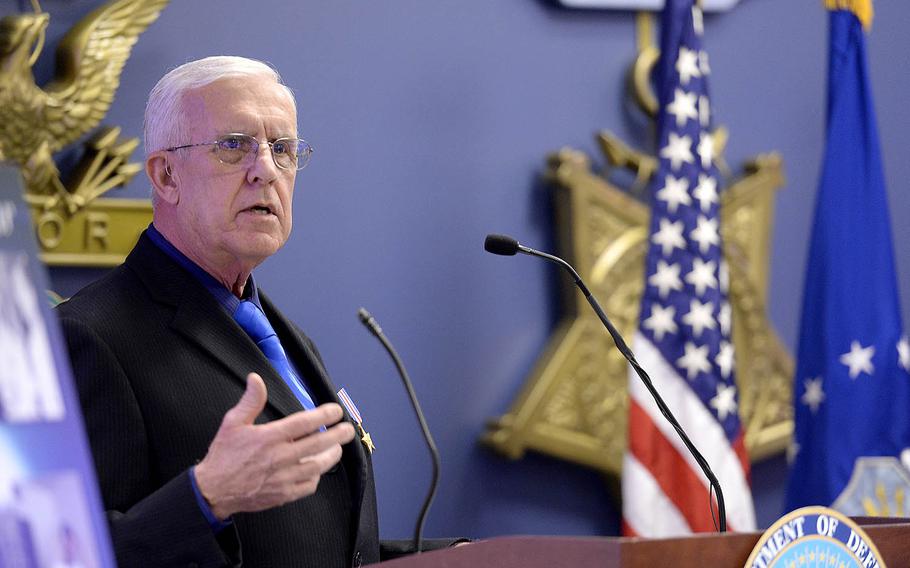 Retired Chief Master Sgt. Ronald W. Brodeur received a long-overdue Silver Star during a Pentagon ceremony Dec. 17, 2015. He said the medal was for Vietnam comrades, especially the Green Hornets who never received decorations of valor they deserved or those who died. (Scott M. Ash/U.S. Air Force) Feb. 20, 1969 Cambodia Being blown off the helicopter skids and dangling from his safety harness as heavy gunfire cracked below didn’t scare then-Staff Sgt. Ron Brodeur nearly as much as what happened next.

After pulling himself back onto the skids, Brodeur panicked. He looked across the cabin of the hovering helicopter and thought his Vietnam battle buddy, then-Sgt. Eric Roberts II, was gone.

“I couldn’t see him in the doorway,” Brodeur recalled. “I kind of had a heart-stop moment. ‘Where was he? Did he get blown out? Was he dead or alive?’

The memory was one of many intense moments during a heroic mission in the Cambodian jungle. Brodeur and Roberts would wait 46 years to receive the recognition from the Air Force that others said they were due.

In December 2015, the two former airmen with graying temples received the Silver Stars they were promised for their roles in that Feb. 20, 1969, mission.

“This award was a long time coming,” Roberts said in a ceremony at the Pentagon, after Air Force Chief of Staff Gen. Mark A. Welsh III presented him and Brodeur with the U.S. military’s third-highest award for valor.

The men likely would not have received Silver Stars — the 106th and 107th awarded for the Vietnam conflict — had Roberts’ wife, Sue, not persisted.

She overcame lost and missing paperwork and the difficulty in mining details from once-classified missions, all while refusing to take no for an answer.

In February 1969, Brodeur and Roberts were assigned to the 20th Special Operations Squadron as UH-1P Huey helicopter gunners.

Brodeur and Roberts lived at a Green Beret Special Forces camp in South Vietnam, where their unit maintained a thin fleet of eight helicopters. They often bounced around to other forward-operating locations in the region, where they stood by on constant alert.

At any one time, the crews would be supporting two, three or four Army reconnaissance teams running missions along the Ho Chi Minh Trail.

“The place we would wait was a little time over the (Vietnam) border” from Cambodia, Roberts said. “We would just sit there and wait for them to get into trouble.”

On Feb. 20, 1969, a call came in: A team was “in contact” and was being pursued by a large group of North Vietnamese fighters.

“We took off and went across the river and waited for the team to get to what we hoped would be a suitable landing zone,” Roberts said.

But there was no place to safely put down the chopper.

The six-man reconnaissance team was up against a river on one side with the enemy closing in on the other sides.

The North Vietnamese lit a fire a nearby field — which would have been the landing zone — trying to smoke the Special Forces soldiers out.

“They were stuck,” Brodeur said of the team. “They couldn’t move anymore.”

Under a barrage of steady gunfire from the North Vietnamese, Brodeur and Roberts guided the pilot as he lowered the helicopter into a hover, directing him away from any brush or trees that might hit the tail rotor.

With their safety harnesses hooked into a ring on the helicopter floor, Brodeur and Roberts stood on the skids, threw out two rope ladders to the trapped soldiers and returned fire with their M-60 guns.

Shortly before the Special Forces soldiers reached the chopper, they set off some Claymore mines on the ground, a defensive measure that almost backfired. The concussive force triggered by the explosion knocked the gunners from the skids.

A few scary seconds followed. Brodeur pulled himself back up and didn’t see his wingman.

“I got back on the skid, got back up to my gun,” Brodeur recalled. “As I looked across the cabin, there wasn’t anybody in there yet. Eric wasn’t in the helicopter.”

Then he saw him “sliding back up on the skid, from the front end of the Huey,” Brodeur said.

Roberts had unhooked himself from his harness and inched up the skid to the front of the helicopter to check on the pilot, whose door was blown open.

“If you’re going to lose somebody, that’s not the one to lose,” he recalled thinking at the time.

“He yelled at me he was OK and to get back to the guns,” Roberts said. Roberts closed the pilot’s door, inched back to the gunner position and hooked himself back in.

By this time, the soldiers were on their way up the rope ladders. Brodeur and Roberts pulled them into the helicopter and continued to fire and provide cover for the men.

Everyone made it in safely, but “the radio man” was shot in the back. Luckily his heavy pack took the brunt of the bullet.

Last up was the team leader. “I guess he was so relieved, I can remember he put his arms around me and gave me a big kiss,” Roberts recalled.

With everyone on board, Brodeur and Roberts talked to the pilots “on how to get out of the hole without hitting anything,” Roberts said.

They soon were out of danger.

“Everybody was alive to play the next day,” Brodeur said.

After the mission, the airmen’s squadron commander told the two pilots to put the whole crew in for Distinguished Flying Crosses, Brodeur said. When the paperwork was submitted to the squadron’s wing headquarters, the wing commander wanted them all upgraded to Silver Stars, he said — a decision Roberts found out about by accident.

One night, in the spring of 1969, while Roberts had “charge of quarters” duty in the orderly room at the squadron’s headquarters at Nha Trang, he came across the write-up to upgrade the decorations.

Roberts thought about making copies of the papers, but the write-up was on a yellow legal pad with red pen. The old military copy machine wouldn’t pick up the ink.

Somehow, Roberts’ and Brodeur’s award package became separated from the paperwork of the two pilots, who received their Silver Stars that year. The airmen’s awards packages were lost.

In 1971, about two years after Roberts left Vietnam, he told his wife the story. She starting tracking down one of the pilots and the commanders who had written the original commendations.

They rewrote the package and the Roberts resubmitted it to the Air Force. Pacific Air Forces approved it but a board in Washington downgraded the decoration to the Distinguished Flying Cross.

“That was fine,” Roberts said. “Both Ron and I already had DFCs from other missions.”

But Sue Roberts didn’t relent. As the Air Force and Army began to declassify secret documents from the Vietnam War, she was able to get more information about what the 20th Special Operations Squadron did in Vietnam. But finding records on individual missions was difficult.

“They maintained that records were destroyed before they were declassified,” she said. “From the Air Force side, they have very little.”

The dearth of information likely stemmed from the secret nature of the squadron’s mission — supporting Army reconnaissance teams in Cambodia, which was neutral and supposedly off limits to military activity.

After-action reports of the airmen’s mission and others never mentioned Cambodia. To this day, Roberts’ and Brodeur’s award citation reads South Vietnam. There were no American markings on the planes they flew other than a number.

“There are dead ends that she ran into,” Roberts said. “Where people would just bluntly say, ‘What are you talking about? The Air Force didn’t have helicopters in Vietnam. They were all Army.’”

Sue Roberts pulled together after-action reports and sought out more people who could speak to the men’s mission that day.

“It was not a constant but it was steady for a good 45 years, back and forth,” Eric Roberts said of his wife’s efforts to get the men the Silver Star.

“I knew how much it meant to Eric and Robert. I knew it was burning in his soul,” she said of why she pursued the awards.

Sue Roberts resubmitted the awards package in 2013. It took 18 months before the men heard that their Silver Stars were approved. They were told Secretary of the Air Force Deborah Lee James gave the final stamp of approval.

“They told us that she read every single page for both men and approved it,” Sue Roberts said. “We can’t put into words our appreciation; the recognition, the hope that this gives to the guys, Eric and Ron, as well as the other guys out there.”

The Silver Star, Roberts and Brodeur said, was for all their Vietnam comrades, especially the Green Hornets who never received decorations of valor they deserved or those who died in Vietnam.

“I think about them and their names on the Vietnam Memorial, and I like to think that all of those people that are gone, that didn’t come home, are looking down and saying, ‘Hey Brodeur and Roberts got the Silver Star for us,’ ” Brodeur said. “And that … is a good feeling.”