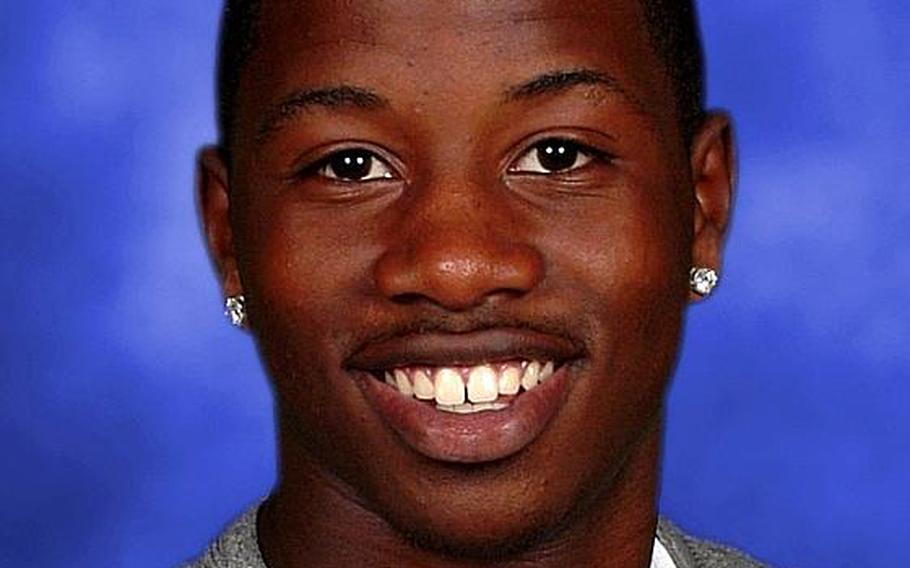 Corey Evans, a Bitburg junior, ran 100 meters in 10.70 seconds Saturday, clocking the quickest time this year in Europe and earning recognition as Stars and Stripes' male Athlete of the Week. (Courtesy photo)

Corey Evans, a Bitburg junior, ran 100 meters in 10.70 seconds Saturday, clocking the quickest time this year in Europe and earning recognition as Stars and Stripes' male Athlete of the Week. (Courtesy photo) Lauren Hawkins allowed only three hits Saturday in pitching the Red Raiders past Division II powerhouse AFNORTH. She also struck out 20, earning her recognition as Stars and Stripes' female Athlete of the Week. (Courtesy photo)

Last week - Evans, a junior who prefers to be called &ldquo;C.J.,&rdquo; highlighted his first varsity track season by running the 100 meters in 10.70 seconds Saturday at AFNORTH. Not only was his time just .20-seconds slower than Isaiah Fluellen&rsquo;s European-record 10.50 set in the D-I championships in 2001 and the fastest so far this season, but had Evans run it in the European championships, it would have been the fastest time since Emmanuel Reddix of Vilseck won the European 100 in 10.60 in 1991.

&ldquo;I don&rsquo;t think he realizes the potential he has,&rdquo; Bitburg coach Brian Bent wrote in a Monday email about his start-at-the-top sprinter who&rsquo;s presently working on his starts. &ldquo;He accelerates quickly and can make up a gap if need be.&rdquo;

As an example of Evans&rsquo;s catch-up ability, Bent cited the Barons&rsquo; opening meet of the season, in which another runner in the 4x100 relay dropped a baton that rolled into the lane where Evans was running Bitburg&rsquo;s anchor leg.

&ldquo;C.J. had to spin sideways and then restart,&rdquo; Bent wrote. &ldquo;He was behind Kaiserslautern by 10-12 meters at this point. Needless to say, he caught the runner and won the race.&rdquo;

Last week - Hawkins, a left-hander, picked up both victories Saturday in hurling the unbeaten Red Raiders to 10-0 and 11-2 victories over visiting Division II contender AFNORTH.

&ldquo;...Hawkins pitched two great games on Saturday,&rdquo; Kaiserslautern coach John Culbreath wrote in a Tuesday email. &ldquo;Her line for both games was 13 innings pitched, two earned runs (given up on a home run by Ashlee Fowler after an error), three hits, 20 strikeouts and three walks.&rdquo;

The twin victories allowed Hawkins, a senior transfer student from Oklahoma, to improve to 7-0 for the season. She also has registered two saves for the 12-0 Raiders.

&ldquo;For the season,&rdquo; Culbreath reported about his prize import from the South Plains, &ldquo;Lauren has given up four runs while striking out 48, against four walks, in 32 innings.&rdquo;