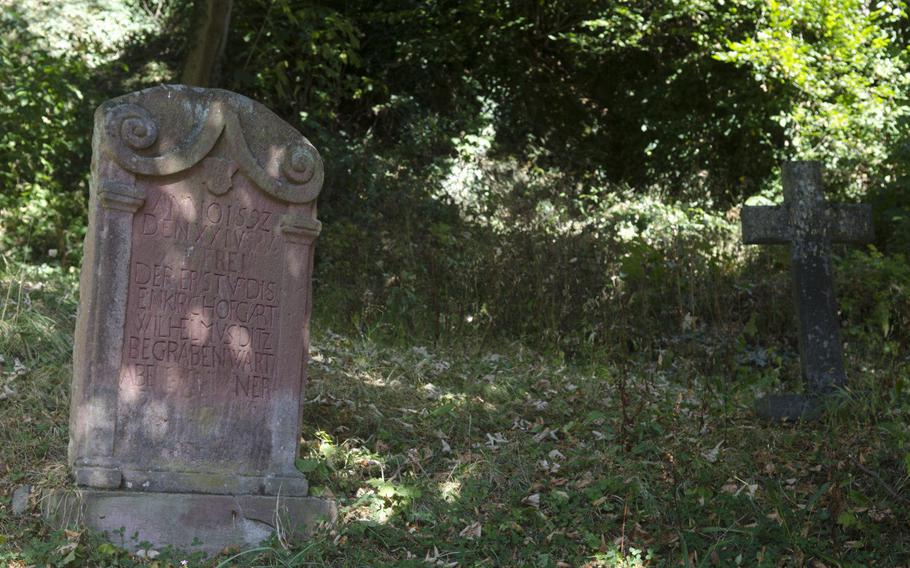 A headstone from the year 1592 at Eppstein, Germany's old cemetery. The town, which was the seat of the powerful lords of Eppstein for hundreds of years, boasts a quaint old town along with a partially renovated castle. (Dan Stoutamire/Stars and Stripes)

A headstone from the year 1592 at Eppstein, Germany's old cemetery. The town, which was the seat of the powerful lords of Eppstein for hundreds of years, boasts a quaint old town along with a partially renovated castle. (Dan Stoutamire/Stars and Stripes) 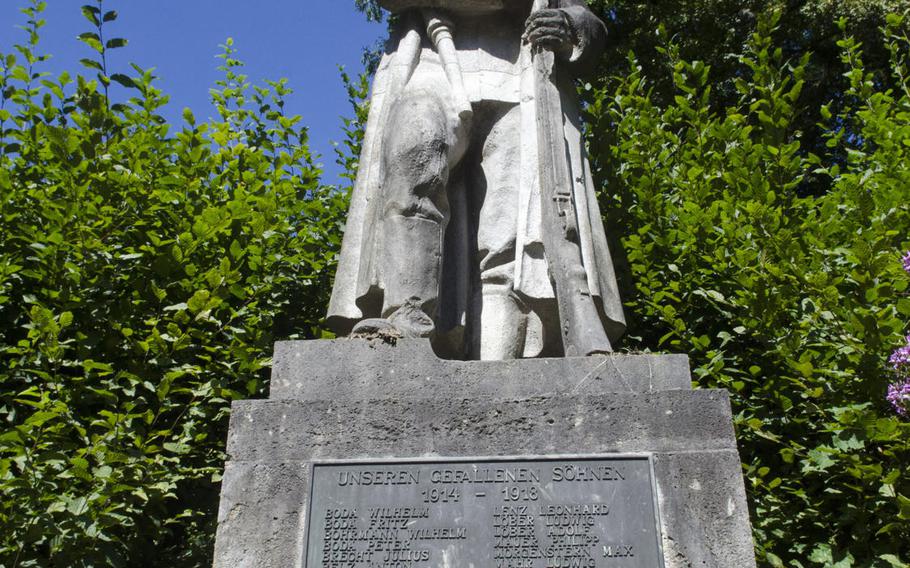 A memorial in Eppstein, Germany, pays tribute to local soldiers who died in World War I. The statue and a nearby tablet list the names of all those from the town who fell from 1914-18. (Dan Stoutamire/Stars and Stripes) 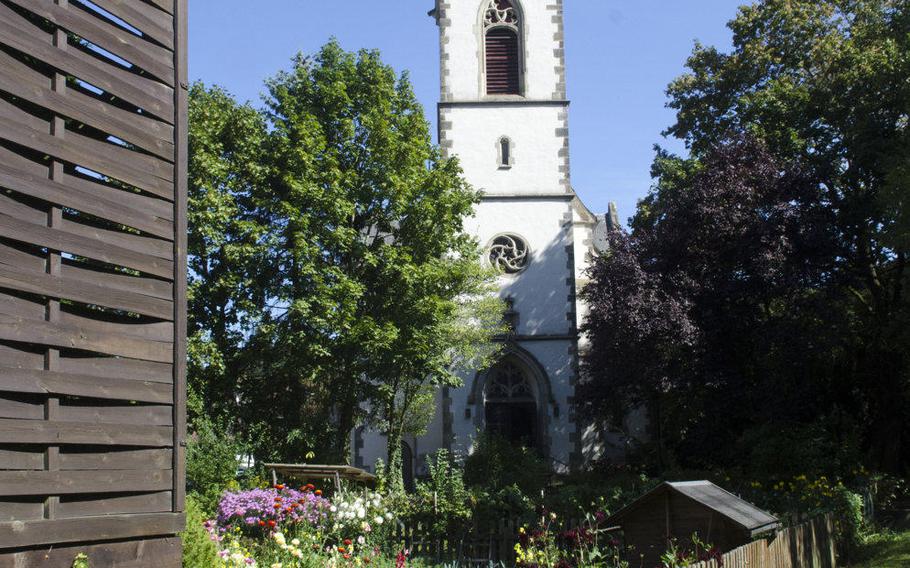 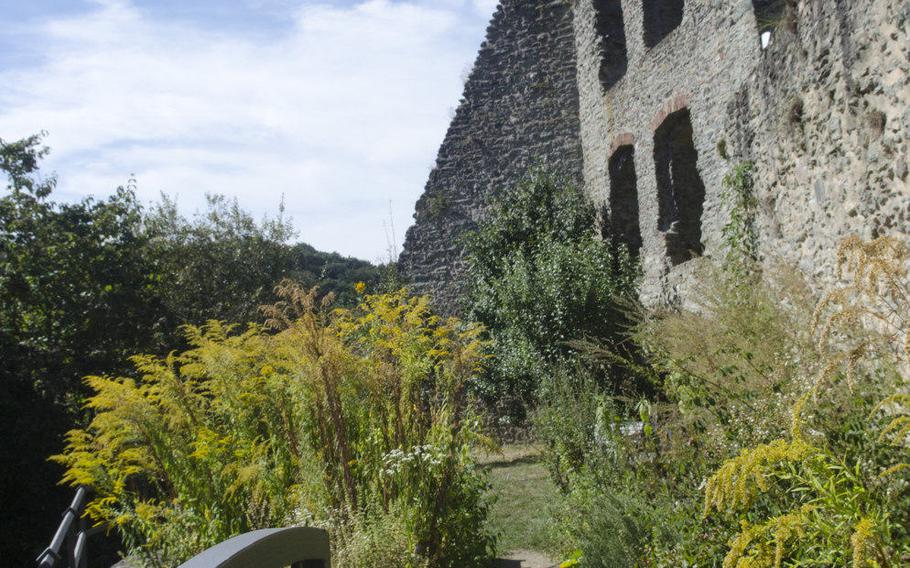 A view of the partially restored Burg Eppstein, a medieval castle just 15 minutes outside Wiesbaden. This was the site of a fruit orchard for castle denizens. (Dan Stoutamire/Stars and Stripes) 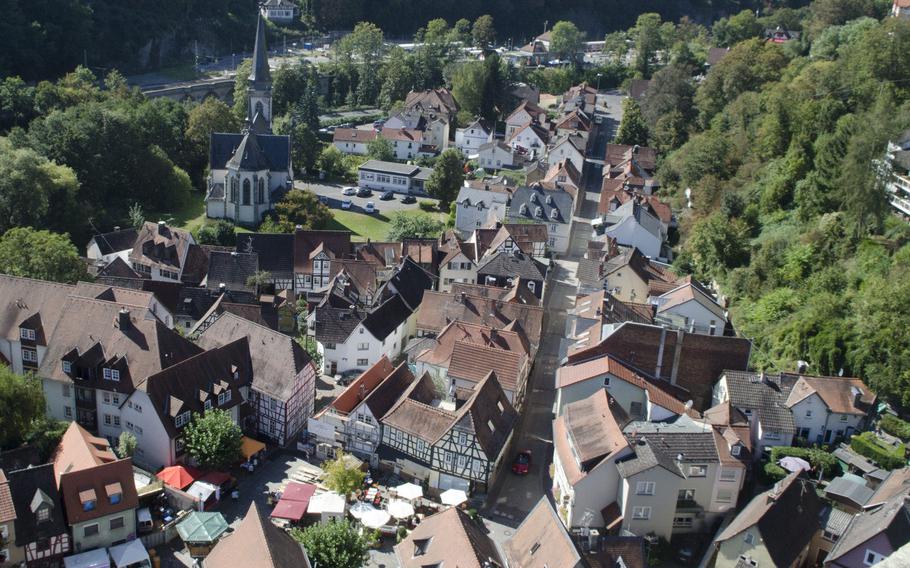 A view of the city center of Eppstein, Germany, from the highest tower in the town's medieval castle, Burg Eppstein. The castle and town lie at the foot of the Taunus Mountains, just minutes from Wiesbaden. (Dan Stoutamire/Stars and Stripes)

About 8 miles north of Wiesbaden, Germany, at the foot of the rolling Taunus Mountains, lies the 1,000-year-old town of Eppstein. Dominated by its partially renovated castle, first mentioned in the year 1122, the town of just more than 13,000 possesses a picturesque pedestrian district and hidden historical treasures spread around its modest confines.

Burg Eppstein, as the castle is known, was the power base of the formidable House of Eppstein, several of whose members held office as the elector of Mainz, one of the seven electors of the Holy Roman Empire. While the family’s hereditary castle has fallen into disrepair over the centuries, renovations begun in the late 19th century have restored some of its former luster.

A modern, steel spiral staircase allows visitors to climb nearly 200 steps to the top of the highest tower, which offers a 360-degree view of the town and its surroundings. In the fall, changing leaves give the heavily forested Taunus a golden glow.

A museum on the castle grounds houses artifacts. The volunteer staff, many of whom speak English, are happy to explain the history of the town and castle to visitors. Surrounding the castle is a small park, perfect for a family stroll or walking the dog. The castle is but one of the attractions in Eppstein. The small cemetery, just off of the main square, has tombstones dating to 1592, and many more from the 17th century. Adjacent to it is an impressive memorial to the town’s fallen soldiers in World War I, which lists the names of residents who died in the trenches of that terrible conflict. One family, the Sparwassers, lost five children.

For hikers, a 4.6-mile circuit trail, which begins near the city center, goes to the nearby Imperial Temple, erected to honor Kaiser Wilhelm II. Perched on an overlook above the town, it offers an amazing panoramic view of the castle and downtown Eppstein.

There are several restaurants within an easy walk from the castle, from doener shops to fine dining. The Hotel Zum Taunus and Pflasterschisser offer extensive menus of local wines to accompany traditional regional cuisine, such as schnitzel, Flammkuchen and fish.

PARKING Free parking is available along the highway and around the city center.