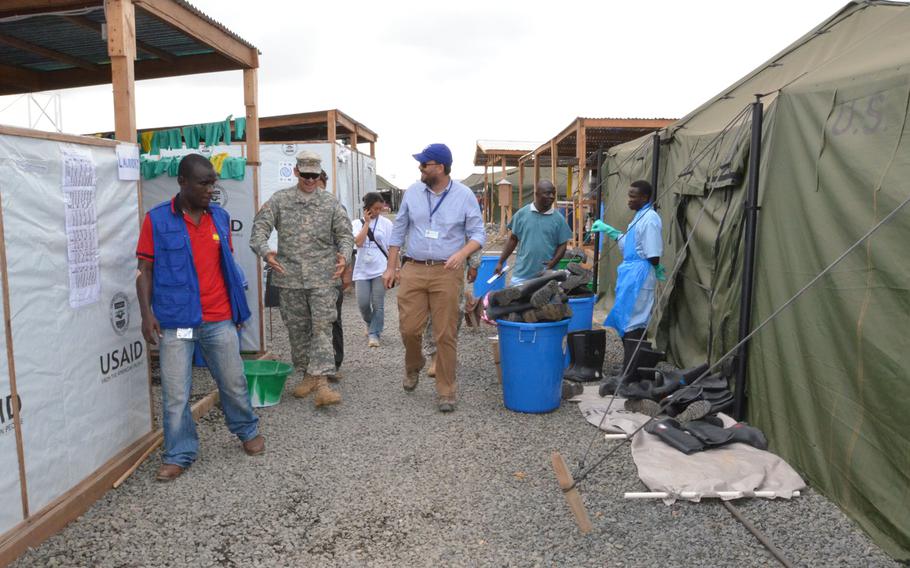 Andrew Lind, right, project coordinator for the International Organization for Migration, takes soldiers of the 36th Engineer Brigade, out of Fort Hood, Texas, on a tour around the Ebola treatment unit after its grand opening, Buchanan, Liberia, Dec. 22, 2014, as part of Operation United Assistance. (Ange Desinor/U.S. Army)

The Centers for Disease Control and Prevention requires both tests to determine whether a patient is Ebola-free.

The soldier had recently returned from West Africa to Fort Hood, Texas, and was at his off-post home on emergency leave, according to an Army news release. He had been following guidelines that call for twice-daily self-monitoring and reporting his status to medical officials and had shown no signs of Ebola, officials said.

The 24-year-old soldier was found lying face down in front of his home about three miles from Fort Hood when Killeen, Texas, police officers arrived Tuesday morning, according to a police spokesman. He was declared dead at 8:26 a.m., and authorities ordered an autopsy, police said.

After police learned the soldier had recently returned from West Africa, they called the Killeen HAZMAT team and had the soldier's body sent to Carl R. Darnall Army Medical Center at Fort Hood for Ebola testing.

The dead soldier was among about 80 soldiers with the 36th Engineer Brigade who returned to Fort Hood on Wednesday from Liberia.

At the time of the return, officials said the soldiers would remain secluded at Fort Hood for 21 days. However, this soldier was allowed to visit his family under an emergency leave exception, the San Antonio Express-News reported.

The soldiers spent about three months in Liberia building Ebola treatment centers, but Col. Heath Roscoe, the brigade commander, told the Austin American-Statesman that they were not in contact with any infected patients and avoided local food and shaking hands with local soldiers to prevent infection.

In November, an Air Force major who was flown to Fort Bliss after falling sick in West Africa tested negative for the virus.