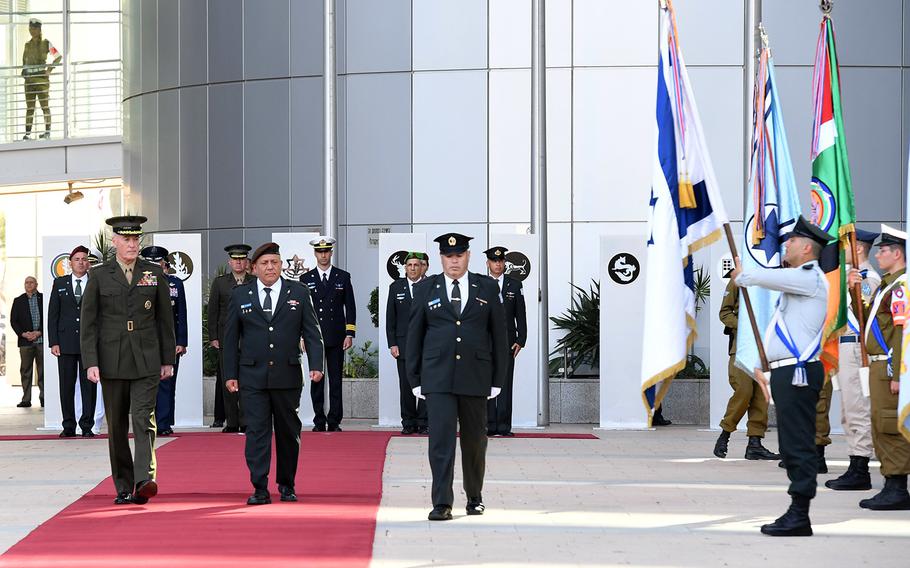 Chairman of the Joint Chiefs of Staff, General Joseph Dunford was received by a full honor guard of Israel Defense Forces soldiers at the IDF headquarters in Tel Aviv, Tuesday, May 9, 2017. (U.S. Embassy Tel Aviv)

Under the terms of an agreement signed last week in Astana, Turkey, several large areas of western and southern Syria would become protected areas where the use of weapons, including airstrikes, would be prohibited. Russia, Iran and Turkey would be empowered to “take all necessary measures” to enforce the peace in these zones, including attacks inside those areas against Nusra Front, al-Qaida or ISIS.

One of the zones would be in southern Syria in rebel-held territory along the Israeli-Syrian border by the Golan Heights.

Dunford, who was traveling in Israel this week to meet with Israeli Prime Minister Benjamin Netanyahu and top defense officials, said Israel is concerned about the possibility of having Iranian or Iranian-backed forces, such as Hezbollah, so close to its border.

Israel “would want to make sure, as these zones are proposed, that their security concerns are going to be addressed,” Dunford said. “One of the specific areas of concern is advanced weapons in the hands of Lebanese Hezbollah,” which Dunford called “a major conventional force.”

Israel has conducted air patrols over southern Syria targeting Hezbollah and established its own airstrike “deconfliction” channel with Russia around the same time the U.S. did, in late 2015, after Russia began conducting airstrikes there in support of Syrian President Bashar Assad, said Dan Arbell, a Middle East expert at the Brookings Institution who worked for 25 years in Israel’s foreign service.

In late April, Israel conducted airstrikes in Damascus, Syria, to target what it said was Assad-provided arms shipments to Hezbollah, and that same night launched a Patriot missile to shoot down a drone over the Golan Heights that it said was Syrian or Russian, according to The Associated Press.

“Israel would reject any role Iran may be given in a future solution to the Syrian crisis, and especially objects to any physical Iranian presence in southern Syria,” Arbell said. If Israel sees the security zones as “some sort of game-changer along the border – if the shipments are jeopardizing Israeli security, they will respond accordingly,” he said.

Israel has supported the rebel presence along its border, providing field hospitals to maintain a buffer between it and the Iranian and Hezbollah-backed Assad regime, said Anthony Cordesman, a senior Middle East expert at the Center for Strategic and International Studies.

Earlier this week, Secretary of Defense Jim Mattis told reporters traveling with him in Europe that the U.S. would consider the proposed zones if they could assist in stabilizing Syria, but said “the devil’s in the details.”

Cordesman said that Israel may endorse security zones to bring stability to Syria, but it’s unlikely to agree to any limits that would keep it from protecting interests in southern Syria or striking shipments.

Cordesman questioned whether the agreement would move forward. Russia, Turkey and Iran are to map out specific zones by June 4.

“Guaranteeing a zone is a diplomatic act,” Cordesman said. “Putting forces in the zone is completely different.” Will Israel tolerate a threat? “Probably not.”

The U.S., which is conducting airstrikes and has ground forces in Syria to combat ISIS; the Assad government; and the Syrian opposition forces who have fought Assad for the last six years in a civil war that has killed hundreds of thousands, did not sign the agreement.