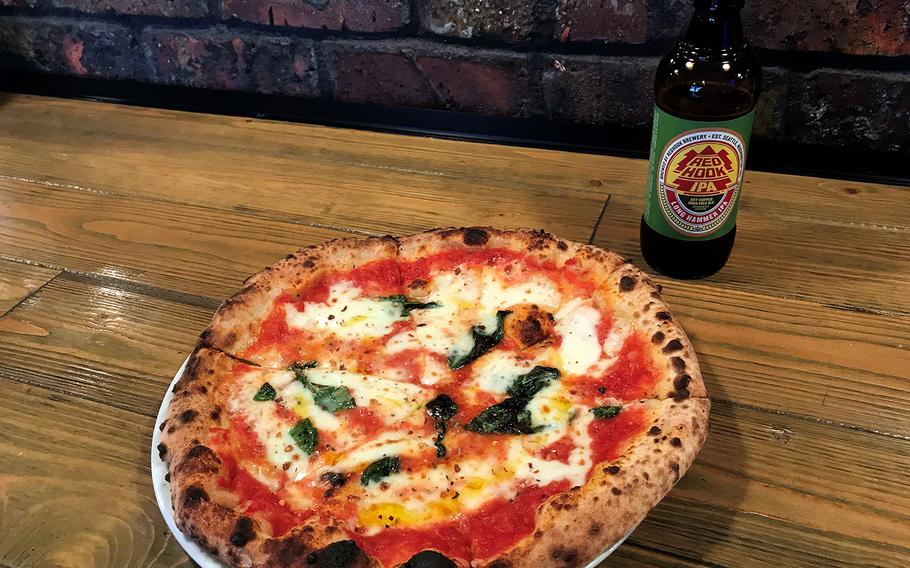 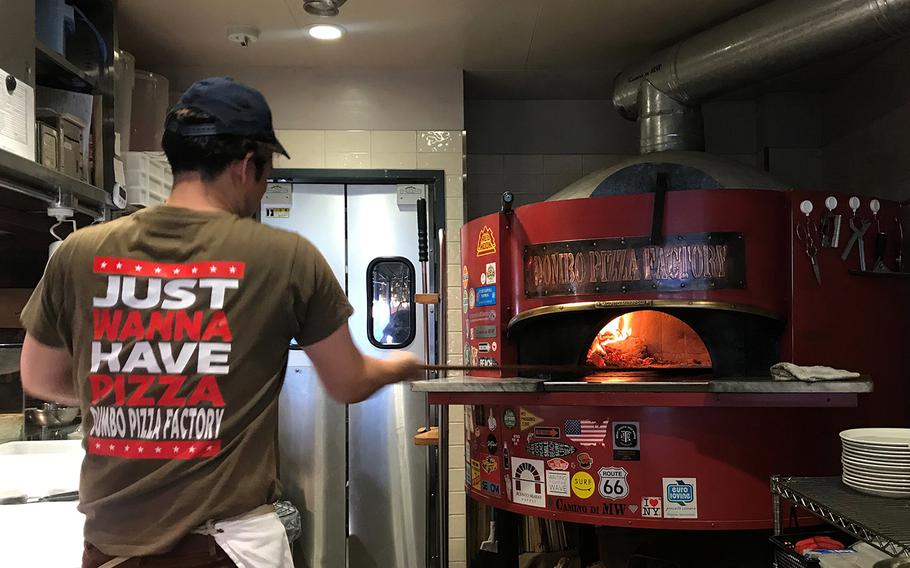 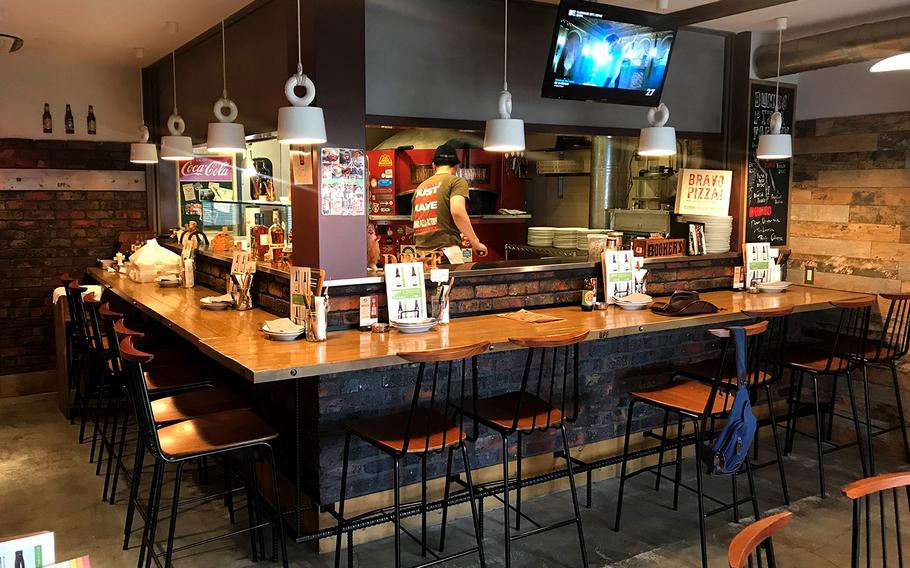 The pizza at Dumbo Pizza Factory in Atsugi, Japan, is easily its best feature, but the location and open-air, patio-style seating combined with good beer makes this place truly special. (James Bolinger/Stars and Stripes) 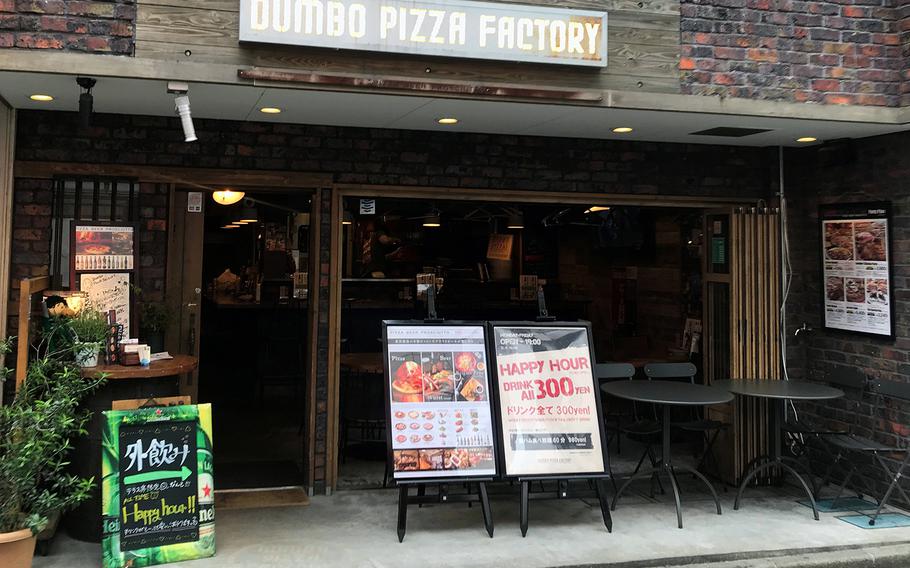 Dumbo Pizza Factory near Naval Air Facility Atsugi, Japan, has a open patio feel thanks to the sliding doors at the front of the restaurant. (James Bolinger/Stars and Stripes)

The quality of a pizza parlor coincides with the quality of its Margherita pie, and Dumbo Pizza Factory near Naval Air Facility Atsugi is the best I’ve had in Japan.

The Margherita is a basic pie, but it’s also a staple of any parlor. A quality Margherita is a balancing act between the crust, the sauce, fresh mozzarella, fresh basil and a drizzle of olive oil. It can also include fresh tomatoes depending on the restaurant.

I use it as a measuring stick for every pizza joint I visit, because it lets every ingredient stand alone. Every pizza is grounded in its crust. If the crust is bad, nothing can save the meal.

Dumbo’s crust is excellent. It’s crispy, crusty and chewy. You can easily fold it in half like a proper New York-style pie. It stands up to the sauce and doesn’t flop in the middle when you pick it up. Best of all, since it’s cooked in a wood-fired oven, the bubbles on the edge get a little bit of char, adding a smoky flavor to every bite.

There is nuance in tomato sauce that makes or breaks a Margherita pizza. Too much and the cheese slides off. It will overwhelm your taste buds and mask the other components. The chef must find a balance in the sauce between acidity and sweetness that complements the crust, the cheese and the basil.

Dumbo’s nails the sauce. It has just the right tinge of sweetness that sings in tune with the basil and doesn’t overwhelm the mozzarella. Best of all, it’s measured with a small ladle, ensuring that your crust is not saturated and there are no dry bites. Without mozzarella, it’s not a Margherita, and Dumbo’s lays large strips of fresh cheese onto the crust that melt around the basil leaves. The mozzarella here has a nice chew and is not swimming in grease.

Dumbo’s does not heap a mountain of cheese onto the pizza. The Margherita is about balance, ensuring the mozzarella doesn’t drown out the basil or the sauce.

Fresh basil is the final star of Dumbo’s Margherita pie. The full leaf is used, and there are about two leaves per slice.

Fresh basil is aromatic and tingles more than just the taste buds with each bite. The fresher the basil, the stronger the aroma, the better the pizza.

Finally, I am a sucker for spice, so I added red-pepper flakes and chile oil to my pizza when it arrived. Perfection.

Quality wood-fired pizza is a rare find as consistency requires passion. The pizza at Dumbo’s is easily its best feature, but the location and open-air, patio-style seating combined with good beer makes this place truly special.

The entire store front opens up, making half the restaurant a patio. This is great for two reasons. One, the smell of fresh pizza beckons passersby to stop for a bite. Two, there is an innate joy to sitting on a patio with a beer and listening to the sounds of the city.

Speaking of beer, Dumbo’s has a selection of bottled foreign beers. I opted for the Red Hook IPA, a Seattle import. Other options include pale lagers, pilsners, hefeweizens, English pale ales, stouts and black lagers.

The restaurant also has an outstanding happy hour with draft beers for 300 yen.

According to Nao Suzaki, my English-speaking waitress, Dumbo’s does not see many American military members despite its proximity to NAF Atsugi — only a few rail stops away.

The restaurant has an English menu, takes credit cards and customers can call in an order for pick up if they don’t feel like dining in, although call-ahead orders may be available only in Japanese.

A Margherita pizza is 980 yen (about $9). Dumbo’s also has a Meat Lovers featuring four types of meat and rosemary for 1,780 yen, and a selection of vegetarian pizzas, including The Shroom, which has four types of mushrooms and smoked mozzarella, for 1,480 yen.

The pizzas here are about 12 inches and cut into six slices. Even if you are hungry, one pie will feed a grown adult.

Other menu items include Belgian Fritz (french fries) with truffles and Parmigiano for 650 yen, the Wurst Platter with five kinds of sausage for 2,980 yen, and a large order of baby back ribs for 2,680 yen.

Dumbo Pizza seems to have it all, even if pizza is where the chef, Horiuchi Mamoru, hangs his hat. I left Atsugi envious of the sailors who live such a short distance from this hidden gem, and I recommend it for anyone visiting the city.

Directions: About a one-minute walk from the south exit of Hon Atsugi Station