Does a servicemember's suicide qualify him as a combat casualty? 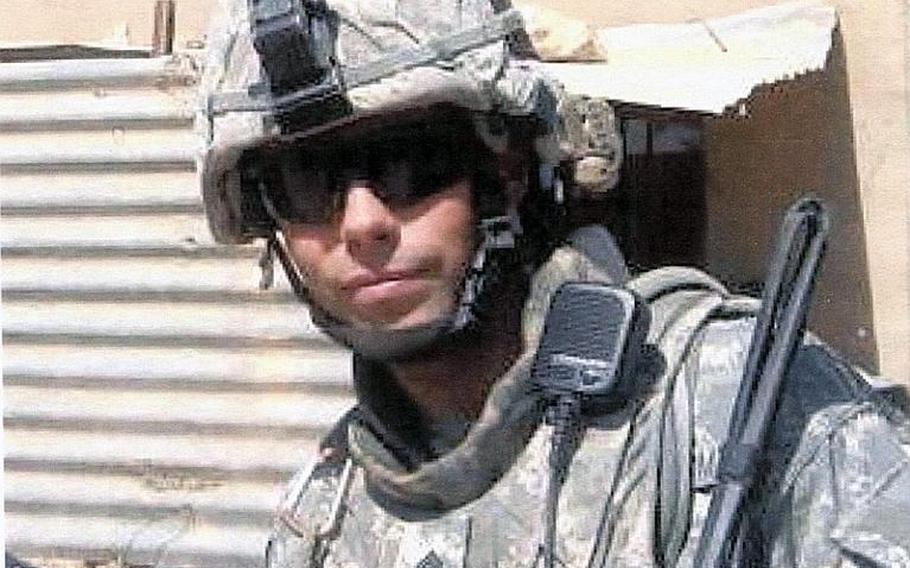 Army Sgt. Ben Miller battled post-traumatic stress disorder after his first tour to Iraq. In the midst of his second tour, Miller killed himself while on leave. (Courtesy of Mary Clare Lindberg) 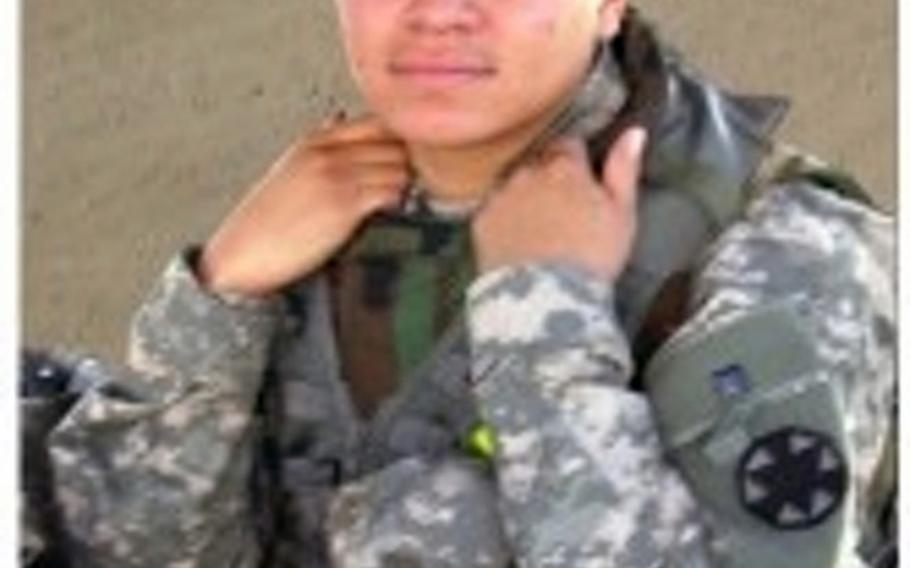 Army Spc. Andrew Velez after a patrol in Afghanistan in 2006. Andrew killed himself during the deployment. His sister, Monica Velez, says that the death of their brother, Jose, in 2004 Iraq led to Andrew&#39;s suicide. While she sees no difference between the deaths of her two soldier brothers, a memorial in Texas refuses to put Andrew&#39;s name on a memorial wall because he wasn&#39;t killed in action. (Courtesy of Monica Velez) Jose Velez, left, and his little brother, Andrew, back home, the last time they saw each other. Army Spc. Jose Velez died in combat in Fallujah, Iraq in 2004. Andrew was also deployed there and escorted his brother&#39;s remains home, something their older sister Monica believe led Andrew to take his life in Afghanistan in 2006. (Courtesy of Monica Velez) 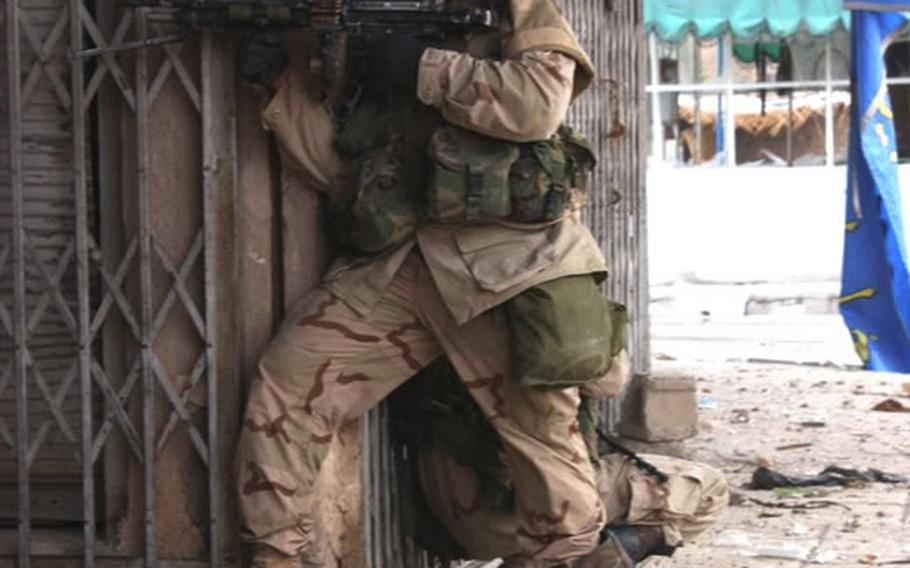 Army Spc. Jose Velez in Fallujah, Iraq, days before he was killed in November 2004. (Courtesy of Monica Velez) A 5-year-old Monica Velez with her two little brothers, Andrew, left, and Jose. Both Velez brothers joined the Army, and Jose was killed in 2004 in Fallujah. Andrew took his own life while deployed to Afghanistan in 2006. Monica says Jose&#39;s death undoubtedly played a part in Andrew&#39;s suicide. Adding to her grief, the Lubbock Area Veterans Memorial in Texas refused to put Andrew&#39;s name on a memorial wall, claiming that it is only for those who died in combat. Monica Velez struggles to see the difference between her brother&#39;s deaths. Both died in uniform. (Courtesy of Monica Velez)

Monica Velez sees no difference in the deaths of her brothers, Jose and Andrew. They both died in an Army uniform while serving their country.

The American Legion doesn&rsquo;t see it that way.

At the Lubbock Area Veterans Memorial in Texas, Army Cpl. Jose A. Velez&rsquo;s name is inscribed on the black granite wall honoring local residents killed in Iraq and Afghanistan. Jose, 23, was killed Nov. 13, 2004, in Fallujah, Iraq.

His little brother, Spc. Andrew Velez, 22, took his own life in Afghanistan in 2006.

&ldquo;He&rsquo;s probably in a better place and doesn&rsquo;t care about it, but he worked for that recognition,&rdquo; she said.

Every three or four months, when she asks the group to reconsider, she gets the same answer: Andrew doesn&rsquo;t belong there.

As the military and families reel under an alarming increase in troop suicides, units and communities across the country are faced with the question of how and whether to memorialize those deaths. The social stigma attached to suicide, and differing views about what constitutes a war death, often play a role in deciding whose loss is commemorated on a wall, plaque or monument.

The Velez family is welcome to buy a commemorative brick for $125, said Jerry Dickson, a member of the legion&rsquo;s board of directors. But that black granite wall is only for combat deaths.

Andrew Velez &ldquo;had a choice,&rdquo; Dickson said. &ldquo;He took his own life. His brother did not. He was taken by the enemy. All of them up there lost their lives to the enemy.&rdquo;

There is no military guidance regarding what kind of deaths can be memorialized. Such decisions are left to local groups and military communities, decisions sometimes colored by personal views on suicide.

&ldquo;When you start looking at the issues of who died and how they died, it gets very complicated,&rdquo; said Ami Neiberger-Miller of the Tragedy Assistance Program for Survivors, a group that helps military families deal with loss. &ldquo;There are a lot of ways you can die in the military.&rdquo;

Velez will never know for sure, but she believes Andrew&rsquo;s suicide began when he escorted their brother&rsquo;s body home from Iraq in 2004. Andrew was in-country with another unit.

Bad weather at Germany&rsquo;s Ramstein Air Base left him stranded for hours next to the casket holding Jose&rsquo;s remains. Velez remembers him calling her on a cell phone he borrowed from someone in the terminal, crying and screaming for hours. No one was there to help him, she said, adding that she feels Andrew was treated too callously by the military after his brother&rsquo;s death.

Andrew changed after he brought Jose home. He was angry about everything and would get yelled at by his commanders.

He got orders for Afghanistan in 2005 and jumped at the chance to go, to prove he was just as strong and brave as Jose.

His problems followed him into the war zone. Eventually, Velez said, his wife told him their marriage was over. The 22-year-old shot himself July 25, 2006, in Sharana, Afghanistan.

Velez said the unfathomable pain inside her will linger as long as Andrew&rsquo;s name isn&rsquo;t on the wall near Jose&rsquo;s, as a lasting testament to what her brothers gave for their country.

&ldquo;Each day doesn&rsquo;t get easier,&rdquo; Velez said of the grief. &ldquo;I don&rsquo;t know who said that. It&rsquo;s just a longer time I&rsquo;ve been without them.&rdquo;

Of the 4,386 troop deaths in Iraq as of May 1, the latest date figures are available, 911 are classified as nonhostile deaths, according to the Defense Manpower Data Center. Of the 1,044 deaths that took place in Afghanistan since Oct. 7, 2001, 282 are noncombat, which includes accident, illness, homicide and self-inflicted categories.

The &ldquo;nice, well-meaning&rdquo; people who sew quilts or send gifts to families of the fallen are usually thinking of troops who have died fighting.

&ldquo;Their whole idea is only related to children whose parents were killed in action,&rdquo; she said.

As the military grapples with suicide rates, the White House is mulling a request by TAPS to send presidential condolence letters to the families of troops who die by suicide.

As part of an unwritten policy in place since at least the Clinton administration, presidents have not sent condolence letters to survivors of troops who took their own lives, according to a New York Times report last year.

Administration and military officials say the roots of the policy are murky and likely based in the view that suicide is not an honorable way to die, the Times reported.

No decision has been made on changing this policy, according to White House spokesman Tommy Vietor.

&ldquo;As Commander-in-Chief, the President has worked with [Defense] Secretary [Robert] Gates and [Joint Chiefs chairman] Admiral [Mike] Mullen to address the mental health needs of our service members, and the administration has begun a review of the current policy that he inherited,&rdquo; Vietor said in an e-mail.

While the military has taken steps to remove the stigma of mental health issues, such efforts remain a work in progress, according to Shelley MacDermid Wadsworth, director of Purdue University&rsquo;s Military Family Research Institute.

&ldquo;There is this stigma still about suicides in our society,&rdquo; she said. &ldquo;People are worried about what other people might think.&rdquo;

Families of those who commit suicide or die in other noncombat incidents feel neglected and worry their loved one&rsquo;s sacrifice won&rsquo;t be remembered.

&ldquo;They often will say we worry she&rsquo;ll be completely forgotten because she didn&rsquo;t die in the war,&rdquo; Neiberger-Miller said, referring to a case involving an airman who died in an airplane accident. &ldquo;That&rsquo;s the same case for suicides.&rdquo;

Army Sgt. Ben Miller had his fill of war during his first deployment to Iraq in 2005-2006, when a good friend died in his arms.

After that, according to his mother, Mary Claire Lindberg, Miller battled insomnia, took an assortment of medications and had terrible dreams when he did manage to doze off &mdash; symptoms that doctors commonly associate with post-traumatic stress disorder.

&ldquo;His thought was, &lsquo;How can I be a sergeant and tell my soldiers to be strong if I go for help?&rsquo;&rdquo;

Miller was scheduled to leave the Army in December 2007, Lindberg said. He was ready to go to college and continue dating a girl he had met. But when his 101st Airborne Division unit was set to deploy again to Iraq in late 2007, Miller was stop-lossed for the tour&rsquo;s duration.

Miller deployed again in September 2007. While on that second stint near Tikrit, he took dozens of photos of the local children he befriended.

But during that tour, Miller sometimes had to clean up body parts after bombings, his mother said. One day he picked up the pieces of some of those kids he had photographed.

&ldquo;I went with the idea I&rsquo;d go there and take pictures of his memorial, that his name would be like the other lost soldiers,&rdquo; she said. &ldquo;They had a memorial on the wall, pictures and everything, trees planted for all of them, but we were not included on any of those things.&rdquo;

When Lindberg asked some of Miller&rsquo;s sergeants why he didn&rsquo;t have a spot on any of the memorials, they told her he was not a combat death, something she disputes.

At Fort Campbell, individual units are not mandated to maintain any sort of memorial, according to base spokeswoman Kelly DeWitt, and decisions on how and whom to memorialize are made at the company level.

With no overall guidance on such issues, some commanders are taking it upon themselves to ensure that troops who die by suicide are remembered for the right reasons.

Late last year, after taking command of U.S. Army Alaska, Maj. Gen. William Troy mandated that troops who commit suicide be given the same memorial service that any other soldier would get, according to a February report in the Anchorage Daily News.