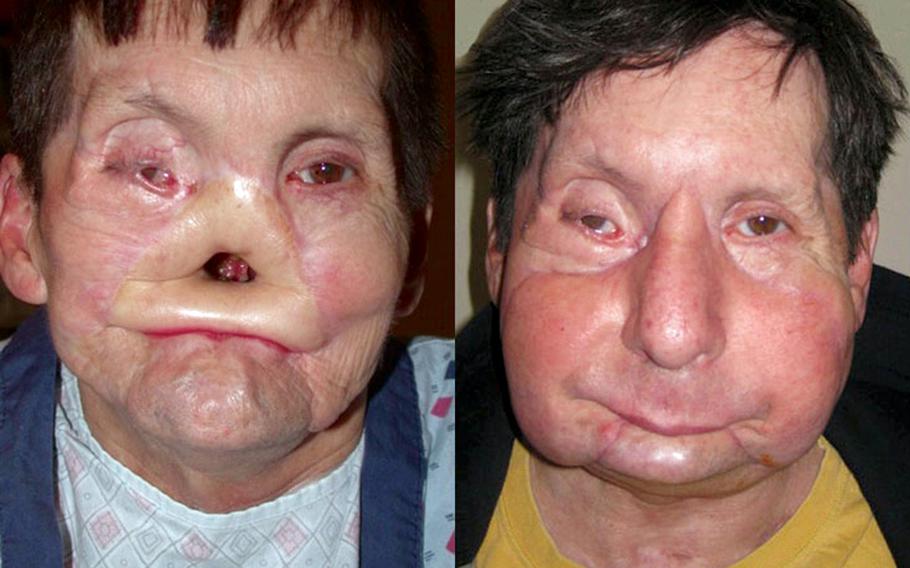 Jim Maki fell face-first onto an electrified subway rail in Boston in 2005. The horrific accident created a gaping hole where his nose once and also left him without his upper lip, cheeks and the roof of his mouth. In 2009, Maki underwent face transplantation surgery at Boston's Brigham and Women's Hospital. Despite the procedure's post-operative risks and the fact that the first one was performed less than five years ago, Maki said the chance to live life normally again made him go through with the surgery. (Courtesy of Brigham and Women's Hospital)

Jim Maki fell face-first onto an electrified subway rail in Boston in 2005. The horrific accident created a gaping hole where his nose once and also left him without his upper lip, cheeks and the roof of his mouth. In 2009, Maki underwent face transplantation surgery at Boston's Brigham and Women's Hospital. Despite the procedure's post-operative risks and the fact that the first one was performed less than five years ago, Maki said the chance to live life normally again made him go through with the surgery. (Courtesy of Brigham and Women's Hospital) 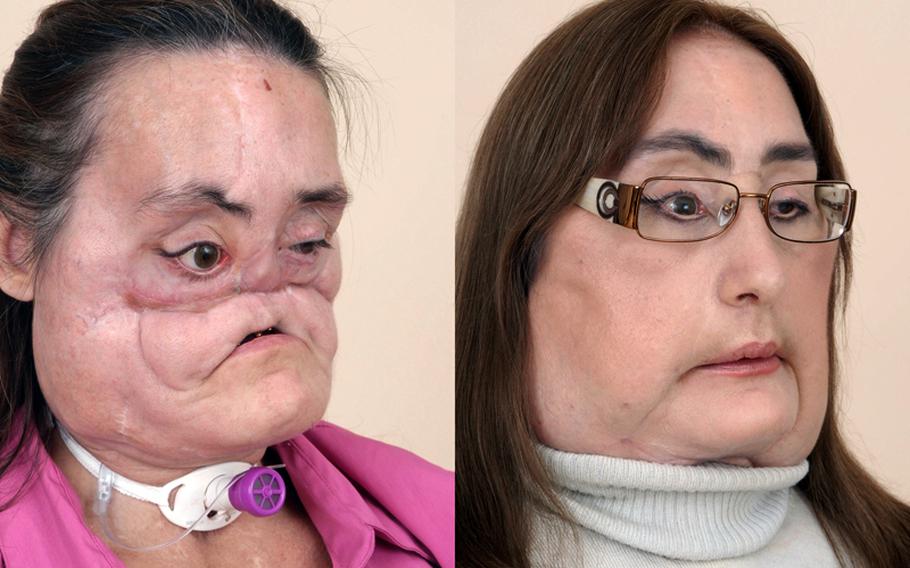 The before-and-after photo shows Connie Culp's transformation as the recipient of the first U.S. face transplant in 2008 at The Cleveland Clinic. Culp lost her left eye, nose, lower eyelids, roof of her mouth and upper lip after being shot in the face in 2004. She could not eat or taste food, drink from a cup or smell again until after the face transplant. (Courtesy of The Cleveland Clinic)

James Maki doesn&rsquo;t remember exactly how he lost his face.

The 60-year-old fell onto an electrified subway rail in Boston in June 2005, leaving him without his nose, upper lip and cheeks and destroying the roof of his mouth.

For four years, Maki ate through a tube and endured the whispers and stares of people who fixated on the gaping hole where his nose once was.

All the while, progress was being made on a historic medical procedure that would change his life &mdash; one that could hold the key to making some of the most severely damaged U.S. veterans feel whole again.

Maki received a face transplant, only the second in the United States, in April 2009 at Brigham and Women&rsquo;s Hospital in Boston. By the end of the year, his surgeon would be leading a $3.4 million Defense Department-funded initiative for Iraq and Afghanistan war veterans.

&ldquo;We really want to help them,&rdquo; Dr. Bohdan Pomahac, head of the Brigham face transplant team, said at the time. &ldquo;They have given up their faces for our country.&rdquo;

The Pentagon leads face transplant research funding in the United States, pouring millions of dollars into Brigham and The Cleveland Clinic &mdash; where the first U.S. face transplant took place in 2008 &mdash; to help troops so badly disfigured in combat that conventional surgery has been of little or no help.

&ldquo;Every war brings something new to medicine,&rdquo; said Dr. Marie Siemionow, who headed the first face transplant team at The Cleveland Clinic, where the military has invested about $1.5 million in the procedure.

The military routes money to Brigham and Cleveland through the Biomedical Translational Initiative and Armed Forces Institute of Regenerative Medicine, respectively. Both programs are aimed at helping troops injured in combat and include partnerships with dozens of public and private hospitals and medical institutions.

Although face transplantation remains highly experimental, Defense Department officials estimate that as many as 200 wounded troops could be eligible. Military doctors have begun scouring the rolls of wounded servicemembers to identify candidates because there is no comprehensive combat injury registry. The military expects to have one in place by next year, including a new classification for &ldquo;penetrating face trauma,&rdquo; Dr. Robert Hale, an Army colonel heading those efforts at the Army Institute of Surgical Research in Texas, said in an e-mail to Stars and Stripes.

In April, the first potential military patient was selected &mdash; a candidate to have his entire combat-mangled face replaced.

He is a member of a new military advisory panel that ensures candidates meet the rigorous physical and mental requirements for the procedure.

&ldquo;It&rsquo;s a new thing to wrap our minds around,&rdquo; said Martin, who will assist with the first military transplant at Brigham when it is scheduled.

The soldier evaluated by the panel in April must undergo extensive screenings at Cleveland or Brigham &mdash; the only two U.S. hospitals sanctioned to perform the surgery &mdash; before he can be considered for the transplant.

Combat veterans who could be eligible for a face transplant mainly have suffered extreme disfigurement as a result of explosions, gunshots or burns, Pomahac said. Such injuries are so catastrophic to the bones, tissue and cartilage that form noses, lips, jaws and cheeks that conventional surgical methods are ineffective. Severe burn victims will be the prime pool for military candidates.

&ldquo;It&rsquo;s not overwhelming numbers, thank God,&rdquo; Martin said of the 200 or so veterans who could qualify. &ldquo;But even if it&rsquo;s one person in a decade, it&rsquo;s worth it.&rdquo;

In April 2009, when a donor was found for Maki, the Vietnam vet jumped at the chance for a new face, despite the risks.

The surgery, first done in 2005 in Paris, comes with a lifelong dependency on anti-rejection drugs, the long-term effects of which are unknown. The drugs suppress the immune system to prevent the body from rejecting the new face. The weakened immune system makes patients more prone to diabetes, cancer and other maladies.

&ldquo;Right now, we cannot legitimately tell the patient what the final outcome will be,&rdquo; said Siemionow, who is researching less harmful anti-rejection medications at Cleveland.

Adding to the complexities of face transplants are a limited donor pool and difficulty in pairing those donors with recipients, Pomahac said. There are also psychological implications of living life with someone else&rsquo;s face.

In the end, patients must weigh the procedure&rsquo;s danger against their desperation to regain a somewhat normal life.

Maki calls his decision to have the transplant a &ldquo;no-brainer.&rdquo;

The chance to have a new face and a sense of normalcy overcame any concerns he had about the dangers of the procedure, which takes about 20 hours. Surgeons must painstakingly attach bundles of nerves and blood vessels, insert cartilage and finally attach the skin, all aimed at restoring not only the aesthetics of the face but also its functions &mdash; from eating and drinking to breathing and smiling.

Lengthy rehabilitation follows as a patient learns to move and speak with a new face, Pomahac said, all of which is dependent on growth of the complex facial nerves.

A few days after Maki&rsquo;s surgery, he asked to see a hand mirror. When they tracked one down, he was surprised at what a good job Pomahac and his team of 35 had done.

&ldquo;I was more than happy,&rdquo; he said. &ldquo;Who wants to walk around with a hole in their face?&rdquo;