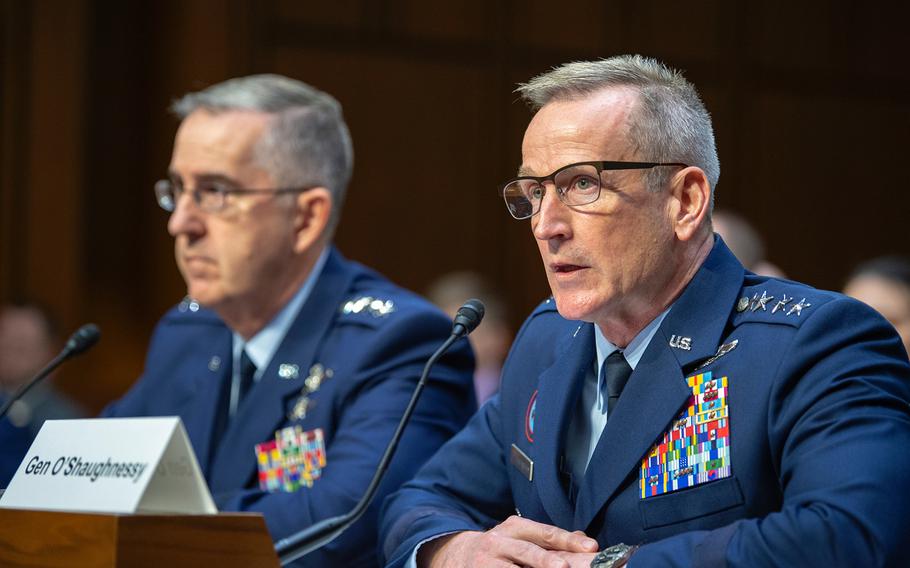 WASHINGTON – The top general for U.S. Northern Command told a Senate panel Tuesday that its Defense Department drug interdiction funds shouldn’t be diverted to help pay for the billion-dollar construction of a wall along the U.S.-Mexico border.

Air Force Gen. Terrence O’Shaughnessy’s comments come amid reports that the Pentagon’s counter-drug account is woefully short of the $2.5 billion sought under the Feb. 15 national emergency declaration by President Donald Trump to allow his administration the authority to use some federal government funds to build a southern border wall. Instead, the drug program has closer to $85 million available, which could mean a scramble to find the money elsewhere in the defense budget.

“We have JTF North, for example, that is dedicated to the counter-narcotics mission… we want to preserve that ability,” O’Shaughnessy told the Senate Armed Services Committee during questioning at a Tuesday morning hearing.

The concerns were raised amid a wide-ranging hearing before the Senate panel that hosted the chiefs for NORTHCOM and U.S. Strategic Command and touched on issues from national emergency concerns to efforts to modernize the country’s nuclear triad.

“We all agree that border security is important… the question is how do you do that in the most effective way …respectful of taxpayer monies as well?” said Sen. Gary Peters, D-Mich. “I understand National Guard troops use Department of Defense drug interdiction program money to go down there and yet now hear that, that drug interdiction money may be diverted to something else?”

Later Tuesday, the Democratically controlled House approved a resolution by Rep. Joaquin Castro, D-Texas, to terminate Trump’s emergency declaration in a vote of 245 to 182.

“This is the most consequential vote we will take in a generation on the balance of powers between the legislative and the executive branches of government,” he said on the lower chamber’s floor ahead of the vote. House Speaker Nancy Pelosi, D-Calif., challenged Republicans, asking if their oath of office was to Trump or the Constitution.

“We would be delinquent in our duties as members of Congress if we did not overturn what the president is proposing,” she said. “He is asking each and every one of us to turn our backs on the oath of office that we took to the Constitution of the United States.”

However, the resolution’s chances to pass a Senate vote remain to be seen, and it could face a Trump veto even if approved in the upper chamber.

The vote and hearing come on the heels of a letter issued Monday by 58 former national security officials, which included former Secretary of State Madeleine Albright, to Trump stating there is no national emergency to justify the diversion of Pentagon funds for wall construction.

On Tuesday, O’Shaughnessy avoided questions on whether he agreed with Trump’s national emergency declaration, though the general said there is no threat to the military from the southern border. Instead, one of the biggest threats facing the country is Russia, O’Shaughnessy said. In light of those comments, Sen. Tim Kaine, D-Va., said Trump’s move to treat the southern border situation and drug use and deaths as a military emergency could raise the specter of other concerns, such as gun control, to be treated as a similar emergency.

“Will we allow a president to declare that drug overdose deaths are an emergency, but the threat isn’t military, and still we’ll take $6 billion out of the Pentagon’s budget to deal with it?” Kaine asked. Meanwhile, O’Shaughnessy said it is “premature” to detail which military construction and drug interdiction projects could be impacted by wall construction plans. Instead, he said work is ongoing now to decide what projects can or can’t be cut, reduced or delayed.

“That’s the process ongoing this week,” he said. But as far as final decisions, “it is still premature and pre-decisional at this point.”