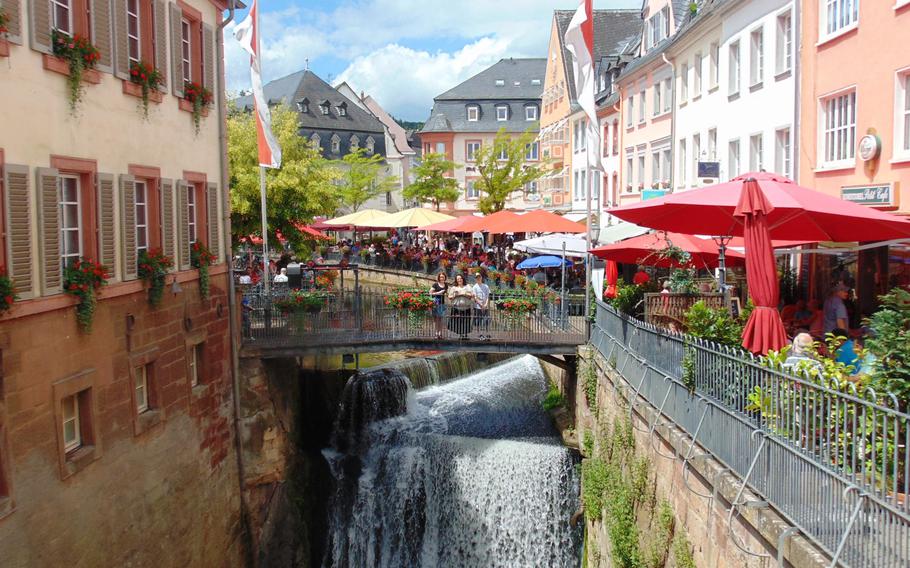 Buy Photo
A narrow bridge spans the waterfall at the center of Saarburg, Germany. The roughly 60-foot waterfall gives the routinely picturesque town a distinctive centerpiece. (Gregory Broome/Stars and Stripes)

Buy Photo
A narrow bridge spans the waterfall at the center of Saarburg, Germany. The roughly 60-foot waterfall gives the routinely picturesque town a distinctive centerpiece. (Gregory Broome/Stars and Stripes) 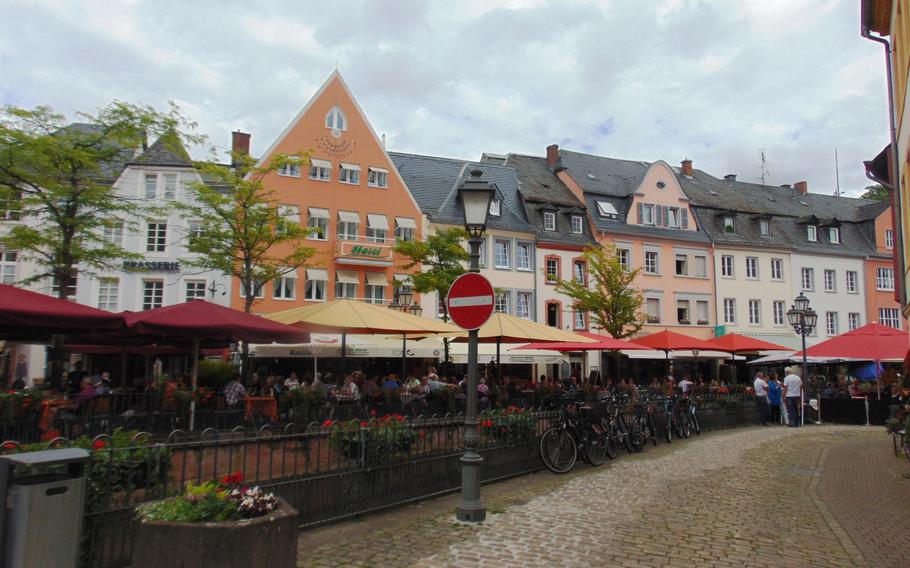 Buy Photo
The town of Saarburg, Germany, has more to offer than the waterfall for which it is best known, including this pleasant street of restaurants and shops. (Gregory Broome/Stars and Stripes) 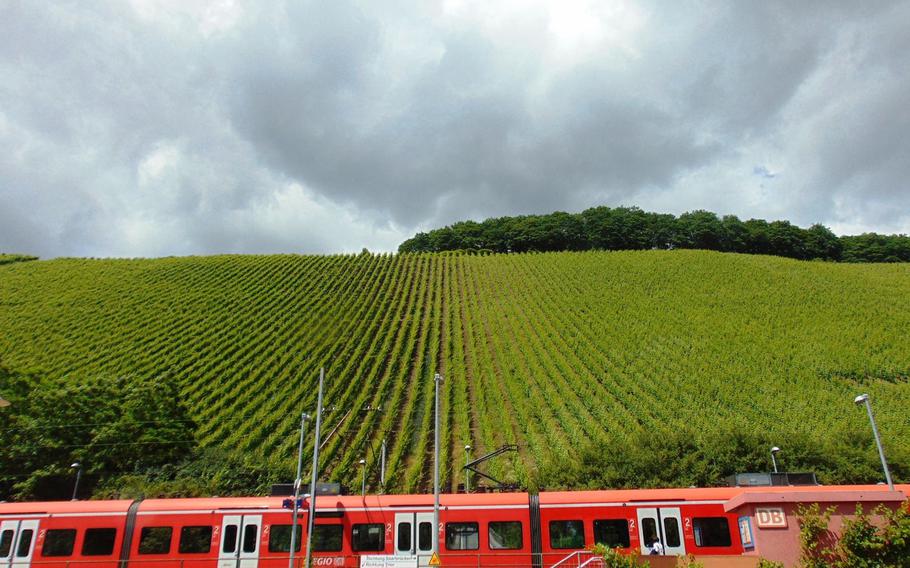 Buy Photo
Away from the distinctive waterfall in the city center, the area around Saarburg, Germany, offers typically beautiful German scenery, including this passenger train passing by a hilly vineyard. (Gregory Broome/Stars and Stripes) 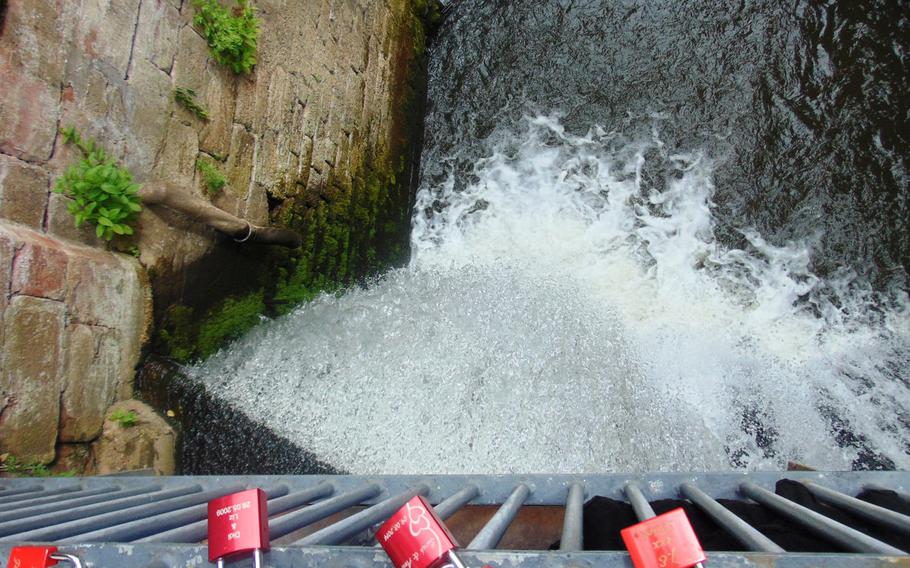 Buy Photo
The impressive waterfall in the center of Saarburg, Germany, is viewed from the narrow bridge that spans the river. The waterfall offers a violent stirring contrast to the town's otherwise laid-back demeanor. (Gregory Broome/Stars and Stripes)

A river runs through it. Along with a waterfall!

That’s the claim to fame of Saarburg, a small southwestern German town nestled in the picturesque wine region close to the border with Luxembourg.

The town, just a 30-minute drive from the more well-known tourist target of Trier, has plenty to recommend it, even without accounting for its signature feature. It’s surrounded by the sprawling countryside, meandering waterways and rising vineyards that typify the region, and its walkable city center features the classic cathedrals, sidewalk cafes and flowerbox-adorned facades one would expect in a quaint German town.

But Saarburg distinguishes itself from towns of its ilk with a majestic, distinctive feature.

The otherwise unremarkable Leuk River creeps into the town center and makes a spectacular drop of some 60 feet before joining with the more substantial Saar River that bisects the town. The stunning waterfall, the result of a 13th-century project to redirect the rural Leuk through the city center, contrasts sharply with the languid charm of the town that houses it. It gives a literal and recurring splash of cold water to Saarburg’s sleepy face.

Locals wander past without a second look and comfortably elevate their voices to be heard over the waterfall’s steady din. Visiting gawkers are offered several vantage points from which to gape, most notable from atop a narrow bridge that spans directly over the plummeting water.

Beyond the impressive 60-foot drop, the waterfall is fascinating for the way it interacts with the town’s other scenic and architectural features. Excess water runs off from unexpected angles around decks and buildings. Planks and stilts elevate structures away from the water’s near-ubiquitous reach. The city museum, Amueseum Saarburg, cuts a particularly striking figure, with a cartoonishly tall brick foundation holding it high above the roaring waters.

In many ways, the town of Saarburg closely resembles scores of other lovely towns in the area. But its unforgettable waterfall, a remarkable combination of the natural and the human-made, sets it apart.

DIRECTIONS: From Kaiserslautern and Ramstein, take the A6 toward Saarbrucken, then take the A8 in the direction of Luxembourg and Trier. Exit onto B51 toward Trier and follow the highway into the Saarburg city center. Parking is available near the city hall and the train station, each just a short walk from the waterfall.

FOOD: Restaurants are plentiful on the streets and sidewalks lining the waterfall.

INFORMATION: The tourism website, saarburg.eu/tourismus, is available in English.