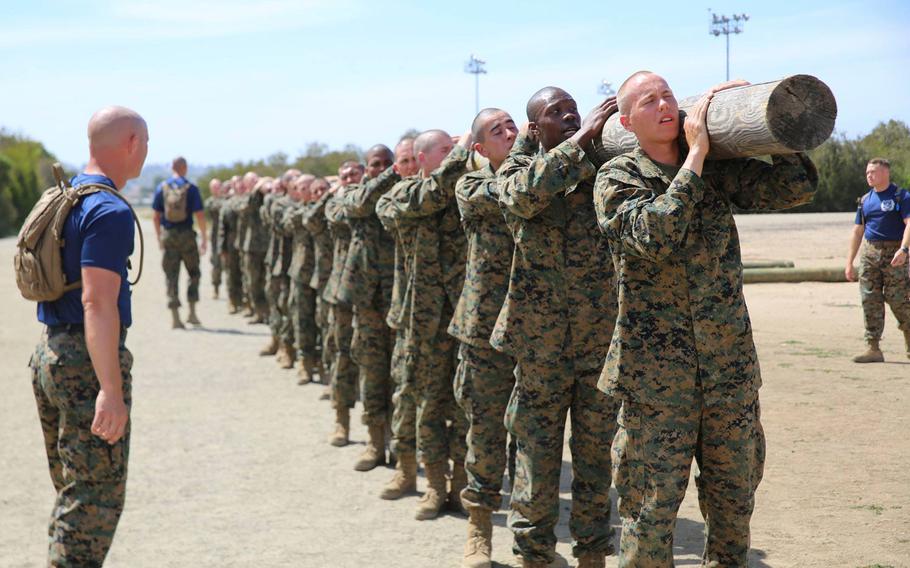 WASHINGTON — A former Marine recruit discharged last year after contracting the bacteria E. coli during the final phases of training at the Marine Corps Recruit Depot San Diego filed a lawsuit blaming the company that supplies food to the military base for his illness.

Lawyers representing Vincent Grano filed the lawsuit against Sodexo, Inc. on Tuesday in the Southern District Court of California, charging their client suffered permanent brain and kidney damage after contracting E. coli from undercooked ground beef served at the company-run facility on the training base, according to court documents filed by the Marler Clark law firm. The suit seeks “just compensation in a fair and reasonable amount for the damages” that Grano has suffered including large hospital bills, according to court documents.

The lawsuit does not target the Marine Corps, said Bill Marler, a managing partner for the Seattle-based law firm.

“We intend to hold Sodexo and the supplier of the tainted meat responsible for the devastating injuries caused to Mr. Grano and the other young servicemembers who have contacted us,” Marler said in a statement.

Marine Corps officials announced in the fall that they had launched an investigation after more than 300 recruits fell ill in October. Several recruits were diagnosed at that time with E. coli infections, though officials said they were not immediately able to identify the source of the illnesses.

Lawyers for Grano said the national Centers for Disease Control and Prevention determined undercooked ground beef was likely to blame for the outbreak. The attorneys said in the ten days before Grano first showed signs of illness that he consumed only food from Sodexo.

In a report, CDC officials wrote they had confirmed 62 cases of E. coli, 62 probable cases and 120 more patients who they suspected contracted the bacterial infection at the recruit depot in October. They wrote undercooked ground beef was a potential source, however they also expressed concerns about poor hygiene among the Marine recruits.

Sodexo is a Maryland-based company that runs some 13,000 dining facility operations across North America, including dining facilities at the San Diego recruit depot.

In their lawsuit, Grano’s attorneys allege Sodexo violated federal, state and local food regulations and its own corporate guidelines by serving inferior food products that were not properly prepared. They also allege the company failed to properly train and supervise its employees to prepare the food.

Sodexo officials did not immediately respond Tuesday to an email requesting comment about the lawsuit.

Grano, 19, fell ill suffering from stomach cramps, nausea, diarrhea, and vomiting on Oct. 23, just one day before he was set to begin The Crucible, the Marines’ legendary 54-hour final training test of boot camp, according to the lawsuit. Three days after those initial symptoms, Grano was taken briefly to the emergency room after experiencing bloody diarrhea.

On Oct. 29, Grano lost consciousness and was admitted to a military hospital where he tested positive for E. coli and was diagnosed with hemolytic uremic syndrome, or HUS, a form of kidney failure that develops in about 5 to 7 percent of E. coli patients, according to the CDC. He remained in the hospital until Dec. 3, according to the lawsuit.

Grano was later diagnosed with epilepsy as a result of the HUS, the lawsuit charges. He has suffered seizures and permanent brain and kidney damage that led to his discharge from the Marine Corps, the lawsuit states.