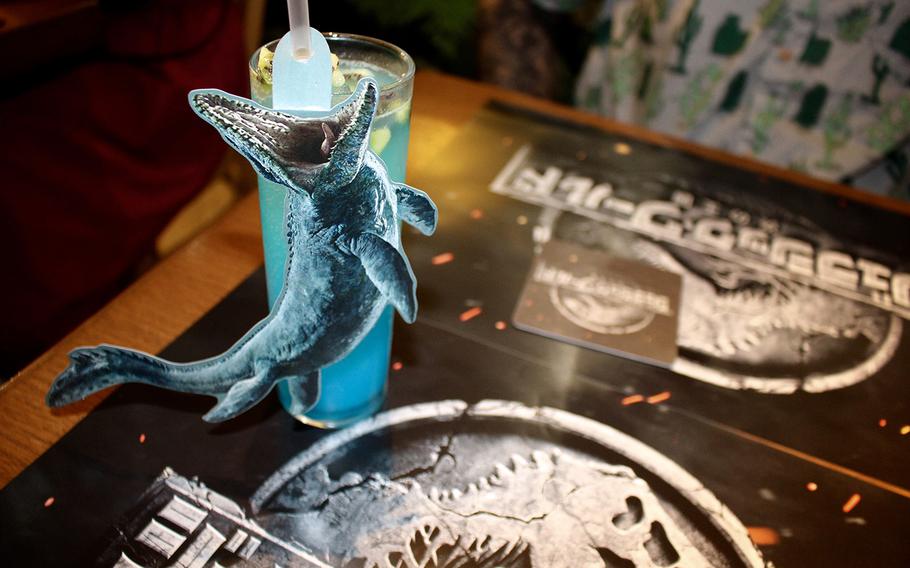 Buy Photo
The Mosasaurus soda at the Jurassic World pop up inside Tokyo's The Guest Cafe is a yogurt-flavored fizzy drink with blue dye to emulate a lagoon. (Denisse Rauda/Stars and Stripes)

Buy Photo
The Mosasaurus soda at the Jurassic World pop up inside Tokyo's The Guest Cafe is a yogurt-flavored fizzy drink with blue dye to emulate a lagoon. (Denisse Rauda/Stars and Stripes) 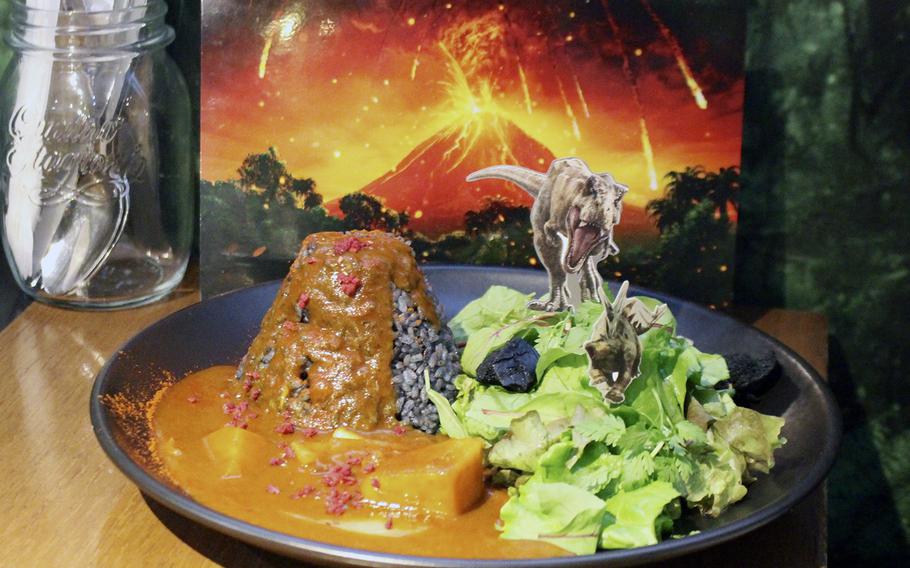 Buy Photo
The "Large Explosion!" curry and black rice looks like a volcano and comes with a mini-backdrop to make sure diners get a good photo for social media. (Denisse Rauda/Stars and Stripes) 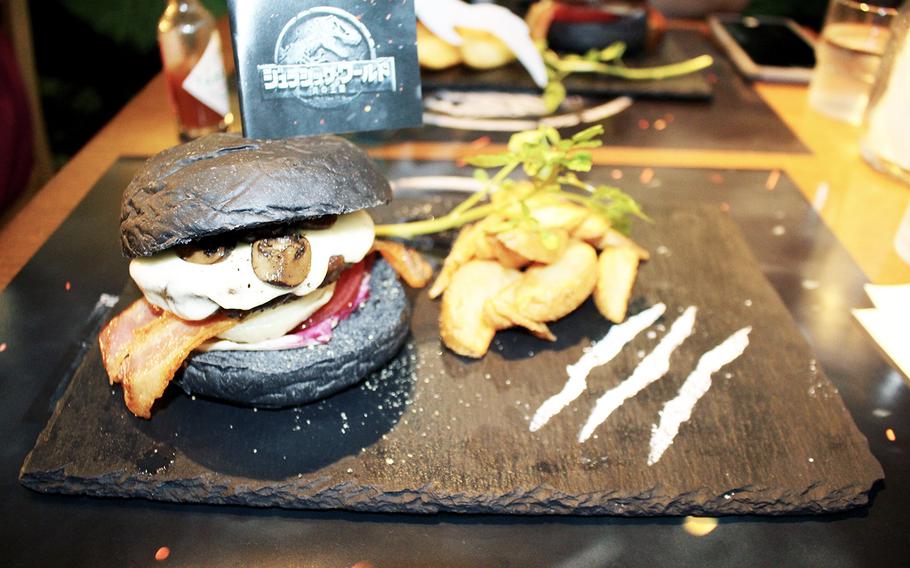 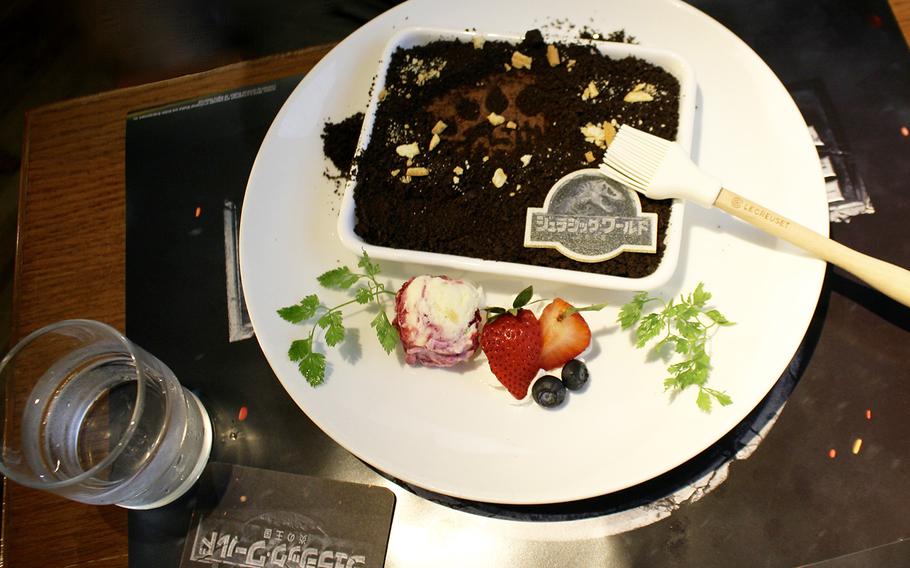 Buy Photo
For dessert, diners can try their hand at excavating fossils with the cake that even comes with a brush to help uncover one of three designs the restaurant offers for this sweet treat. (Denisse Rauda/Stars and Stripes) 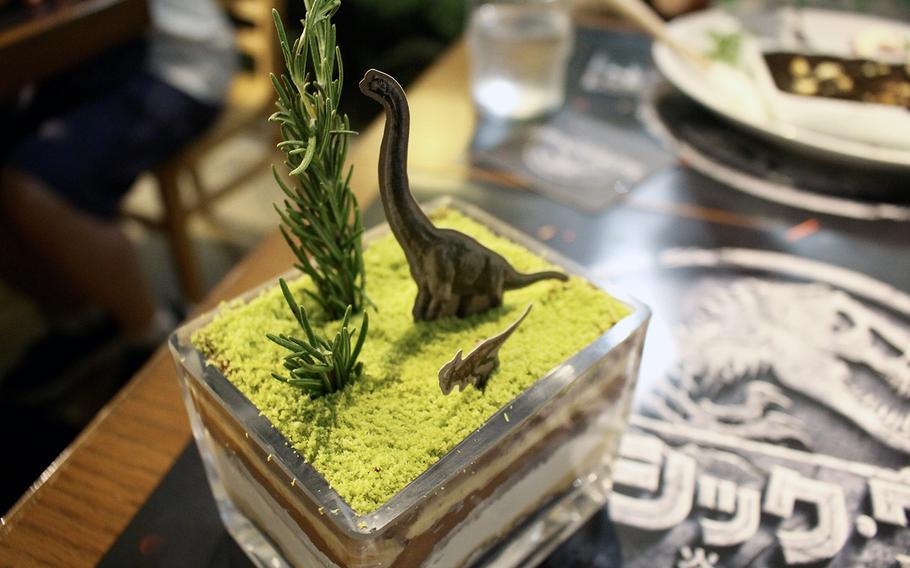 Buy Photo
The layered geologic parfait at the Jurassic World Cafe popup is a mix of vanilla and chocolate puddings topped with green tea "turf." (Denisse Rauda/Stars and Stripes) 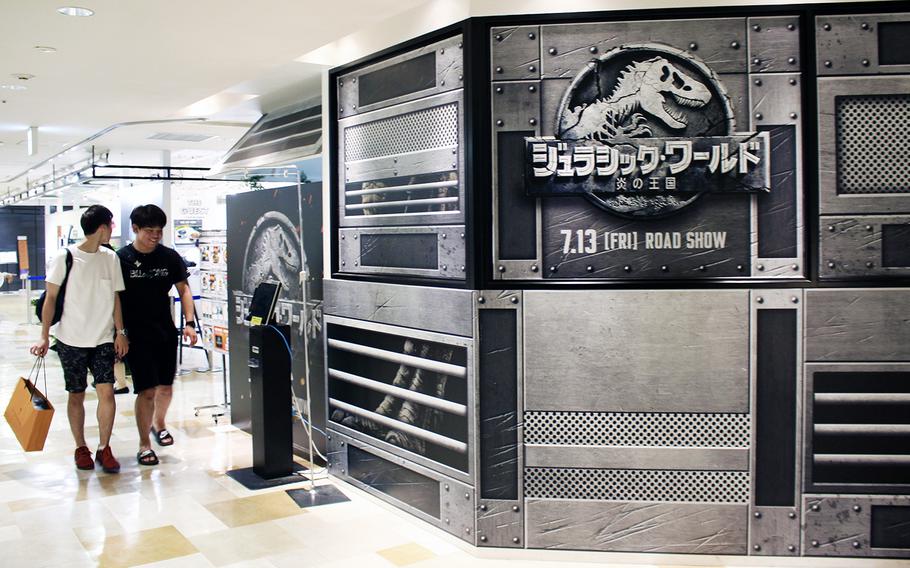 Buy Photo
The exterior reveals only a small taste of what diners experience once inside of the Jurassic World Cafe in Tokyo. The restaurant offers plenty of jungle foliage, dinosaur statues and opportunities for photos to take while you wait for your food. (Denisse Rauda/Stars and Stripes) Tokyo is famous for its themed cafes, which boast special menus and decor inspired by famous animated characters, films or even certain animals. In the past, theme cafes in the sprawling city have honored the likes of Hello Kitty, Sesame Street and Ghostbusters. This month, a new themed cafe seeks to transport its diners from the hustle and bustle of 21st-century Tokyo to the Jurassic Period.

Dinosaur lovers young and old can now enjoy prehistoric-themed food, drinks and desserts at the Jurassic World Cafe, which opened in celebration of the Japan release of “Jurassic World: Fallen Kingdom,” the latest addition to the long-running film franchise.

Hop on a Jeep (or the train) for an excursion to Ikebukuro, one of Tokyo’s many neighborhoods that cater to comic book and anime fans. The Guest Cafe, located on the seventh floor inside Ikebukuro Station’s Parco department store, is hosting the temporary pop-up through Aug. 6.

A friend and I headed to the cafe on a weekday afternoon, but were surprised to discover we still had to wait in line for about five minutes. Once inside, we were greeted by an Indominus rex statue and fake foliage meant to evoke Jurassic World’s tropical setting.

The restaurant also offers plenty of photography staging areas both inside and outside of the dining area — so be sure to bring your selfie game (and a camera). Clips of the new movie play on television monitors to accentuate the cafe’s Jurassic World vibes.

The moderately priced menu adheres to the dinosaur theme and does not disappoint. Spoiler alert: Entrees are cleverly named after events that happen in the movie, and include dishes such as Come to the Kingdom of Flames, a charcoal bun burger (1,390 yen, or about $12.30); Large Explosion! curry and black rice (1,290 yen), made to look like an erupting volcano; and the Powerful Wild Plate (1,390 yen), which boasts several varieties of meat.

I went for the burger, which came topped with bacon, American cheese and mushrooms. Compared to the taste of other “black bun” fad foods that have made appearances in Japan — such as the Burger King’s Black Whopper or IKEA’s Ninja Hotdog — this burger was surprisingly decent. The meat patty was juicy, and the sauce had a tangy barbecue flavor. The food in Japan’s theme restaurants notoriously opts for aesthetics over flavor, so this decent-tasting burger was definitely a surprise.

My only complaint about the burger was the large, overpowering onion slice and the burger bun — which, despite having a pleasant flavor, was too soft and sticky, making each bite awkward and uncomfortable.

If you’re looking for more extravagantly themed food, the Jurassic World Cafe’s dessert and drink menu is where the restaurant really delivers. Diners can choose from iced or hot lattes (790 yen) featuring a dinosaur foam embellishment, or a Mosasaurus soda (890 yen), made of yogurt soda and blue dye. The Volcano Pudding (1,290 yen) features black milk pudding covered in berry sauce and continues the volcano eruption aesthetic, while the Dinosaur Egg Cake (1,390 yen) combines lemon cake and passionfruit syrup into a frighteningly realistic rendition of a dinosaur hatching from an egg.

I opted for the Geologic Parfait (1,190 yen), featuring layers of chocolate and vanilla pudding — all topped off with a green tea “turf” on the surface, rosemary sprigs for trees and brontosaurus cutouts. The dessert ends up looking like a tastier version of a grade-school diorama.

My companion decided to try the Fossil Excavation Cake (1,290 yen). This chocolate cake, filled with custard cream and berry sauce, comes with a silicone brush to help brush away crushed cookie “dirt” to uncover one of three dinosaur designs baked into the surface of the cake.

Both desserts were delicious, but the parfait was too large to eat solo. Since I was full from eating my burger, I ended up leaving a good portion behind.

The pop-up’s attention to detail, along with the quality and flavor of its food, was a step or two above what one would expect from a theme cafe. Each dish was aesthetically appealing and Instagram-worthy.

The cafe has a strict one-hour time limit, and guests can only order once at the beginning — so order all your entrees, drinks and desserts together. And don’t worry, an English menu is available.

After shutting down in Tokyo, the movie-themed eatery will relocate to Osaka from Aug. 10 through the end of September. But after that, this temporary pop-up restaurant will be just like the dinosaurs it honors: extinct.

DIRECTIONS: Ikebukuro Station is accessible via several major train lines, including the JR Yamanote Line and the Tokyo Metro Marunouchi Line. From Ikebukuro Station, follow signs for Exit 22, on the north side of the building, and enter the Parco department store. The Guest Cafe is on the seventh floor.